SPIEGEL: Sergey Alexandrovich, NATO is boosting its presence in Eastern Europe in reaction to recent Russian advances. Western politicians have warned that the two sides could stumble into a situation that might result in war. Are such warnings excessive?

Karaganov: I was already speaking of a prewar situation eight years ago.

SPIEGEL: When the war in Georgia broke out.

Karaganov: Even then, trust between the great powers was trending toward zero. Russia began rearming its army and, since then, the situation has worsened considerably. We warned NATO against approaching the borders of Ukraine because that would create a situation that we cannot accept. Russia has stopped the Western advance in this direction and hopefully that means that the danger of a large war in Europe has been eliminated in the medium term. But the propaganda that is now circulating is reminiscent of the period preceding a new war.

SPIEGEL: You are hopefully referring to Russia.

Karaganov: The Russian media is more reserved than Western media. Though you have to understand that Russia is very sensitive about defense. We have to be prepared for everything. That is the source of this occasionally massive amount of propaganda. But what is the West doing? It is doing nothing but vilifying Russia; it believes that we are threatening to attack. The situation is comparable to the crisis at the end of the 1970s and beginning of the 1980s.

SPIEGEL: You are referring to the stationing of Soviet intermediate-range ballistic missiles and the American reaction?

Karaganov: Europe felt weak at the time and was afraid that the Americans might leave the continent. But the Soviet Union, though it had already become rotten internally, felt militarily strong and undertook the foolishness of deploying the SS-20 missiles. The result was a completely pointless crisis. Today, it is the other way around. Now, fears in countries like Poland, Lithuania and Latvia are to be allayed by NATO stationing weapons there. But that doesn't help them; we interpret that as a provocation. In a crisis, we will destroy exactly these weapons. Russia will never again fight on its own territory ...

SPIEGEL: Rather, if I understand you correctly, you will pursue the strategy of forward defense.

Sergey Karaganov 63, is honorary head of the influential Council on Foreign and Defense Policy, which develops geopolitical strategy concepts for Russia. In May, the council issued new foreign policy premises. The council includes politicians, economists and former military and intelligence officers. Karaganov is an advisor to Vladimir Putin's presidential administration and deacon of the elite Moscow college National Research University Higher School of Economics.

Karaganov: NATO is now 800 kilometers (497 miles) closer to the Russian border, weapons are completely different, strategic stability in Europe is shifting. Everything is much worse than it was 30 or 40 years ago.

SPIEGEL: Russian politicians, including President Vladimir Putin, are trying to convince their population that the West wants war in order to fragment Russia. But that's absurd.

Karaganov: Certainly there has been some exaggeration. But American politicians have openly said that the sanctions are aimed at bringing about regime change in Russia. That's aggressive enough.

SPIEGEL: The evening news on Russian television seems to be even further removed from reality. Even a Moscow-based newspaper recently wrote of the "illusion of an external threat."

Karaganov: The political elite in Russia don't want domestic reform, they aren't ready for it. As such, they welcome an external threat. You have to remember that Russia rests on two national concepts: defense and sovereignty. We approach the question of security much more reverentially than other countries do.

SPIEGEL: Your council has presented foreign and defense policy premises that speak of reclaiming a position of leadership in the world. Russia, the message is clear, does not want to see its power eroded. But what proposals have you put forth?

Karaganov: We want to prevent further destabilization in the world. And we want the status of being a great power: We unfortunately cannot relinquish that. In the last 300 years, this status has become a part of our genetic makeup. We want to be the heart of greater Eurasia, a region of peace and cooperation. The subcontinent of Europe will also belong to this Eurasia.

SPIEGEL: Europeans see current Russian policy as being rather enigmatic. The intentions of the leadership in Moscow are unclear.

Karaganov: We currently find ourselves in a situation where we don't trust you in the least, after all of the disappointments of recent years. And we are reacting accordingly. There is such a thing as tactical surprise. You should know that we are smarter, stronger and more determined.

SPIEGEL: The partial Russian withdrawal from Syria was a surprise, for example. You intentionally left the West guessing how many troops you were withdrawing and whether you would secretly redeploy some of them. Such tactics don't exactly create trust.

Karaganov: That was masterful, that was fantastic. We take advantage of our preeminence in this area. Russians aren't good at haggling, they aren't passionate about business. But they are outstanding fighters. In Europe, you have a different political system, one that is unable to adapt to the challenges of the new world. The German chancellor said that our president lives in a different world. I believe he lives in a very real world.

SPIEGEL: It has been difficult to ignore the Russian pleasure at the problems Europe is currently facing. Why is that?

Karaganov: Many of my colleagues view our European partners with derision and I always warn them not to be cocky and arrogant. Some among the European elite have sought out confrontation with us. As a consequence, we won't help Europe, although we could do so when it comes to the refugee question. A joint closure of borders would be essential. In this regard, the Russians would be 10 times more effective than the Europeans. Instead, you have tried to make a deal with Turkey. That is a disgrace. In the face of our problems with Turkey, we have pursued a clear, hard political line -- with success.

SPIEGEL: You have said that you are disappointed with Europe because it has betrayed its Christian ideals. In the 1990s, Russia wanted to be part of Europe -- but the Europe of Konrad Adenauer and Charles de Gaulle.

Karaganov: The majority of Europeans want that Europe too. For the next decades, Europe will not be a model that is attractive to Russia.

SPIEGEL: In its premises, your council demanded the use of military power when "important interests of the country are clearly" threatened. Ukraine was such an instance?

Karaganov: Yes. Or a concentration of troops that we felt posed the risk of war.

SPIEGEL: The stationing of NATO units in the Baltics isn't sufficient?

Karaganov: This chatter that we intend to attack the Baltics is idiotic. Why is NATO stationing weapons and equipment there? Imagine what would happen to them in the case of a crisis. The help offered by NATO is not symbolic help for the Baltic states. It is a provocation. If NATO initiates an encroachment -- against a nuclear power like ourselves -- it will be punished.

SPIEGEL: On Wednesday, the NATO-Russia Council is to meet for the second time since the Crimean crisis. You also don't think that a resumption of this dialogue platform is worthwhile?

Karaganov: It is no longer a legitimate body. Plus, NATO has become a qualitatively different alliance. When we began the dialogue with NATO, it was a defensive alliance of democratic powers. But then, the NATO-Russia Council served as cover for and the legalization of NATO expansion. When we really needed it -- in 2008 and 2014 -- it wasn't there.

SPIEGEL: You mean during the Georgian war and the Ukraine conflict. In papers issued by your council, terms like national dignity, courage and honor often appear. Are those political categories?

Karaganov: They are essential Russian values. In Putin's world, and in mine, it is inconceivable that women be harassed and raped in public.

SPIEGEL: Are you referring to the sexual assaults that took place in Cologne on New Year's Eve?

Karaganov: If men were to do something like that in Russia, they would be killed. The mistake is that Germans and Russians haven't spoken seriously about their own values in the last 25 years -- or they didn't want to understand each other on the topic. During Soviet times, we too claimed there were only universal values, just as the West is doing now. It scares me when the Europeans demand more and more democracy. It sounds like times past, when people here demanded more and more socialism.

SPIEGEL: Where do you think Russian foreign policy has gone wrong?

Karaganov: In recent years, we didn't have a political strategy for dealing with our immediate neighbors, the former Soviet republics. We didn't understand what was really happening there. The only thing we did was subsidize these countries and buy their elite -- with money that was then stolen, likely together. As a result, it wasn't possible to prevent the Ukraine conflict. The second problem: Our politics was focused for too long on fixing past mistakes -- fixing the mistakes made in the 1990s.

SPIEGEL: In the Russian press, there has been some conjecture that Russia will send out signals of rapprochement following parliamentary elections in September. Is such conjecture justified?

Karaganov: We believe that Russia is morally in the right. There won't be any fundamental concessions coming from our side. Psychologically, Russia has now become a Eurasian power -- I was one of the intellectual fathers of the eastward pivot. But now I am of the opinion that we shouldn't turn away from Europe. We have to find ways to revitalize our relations. 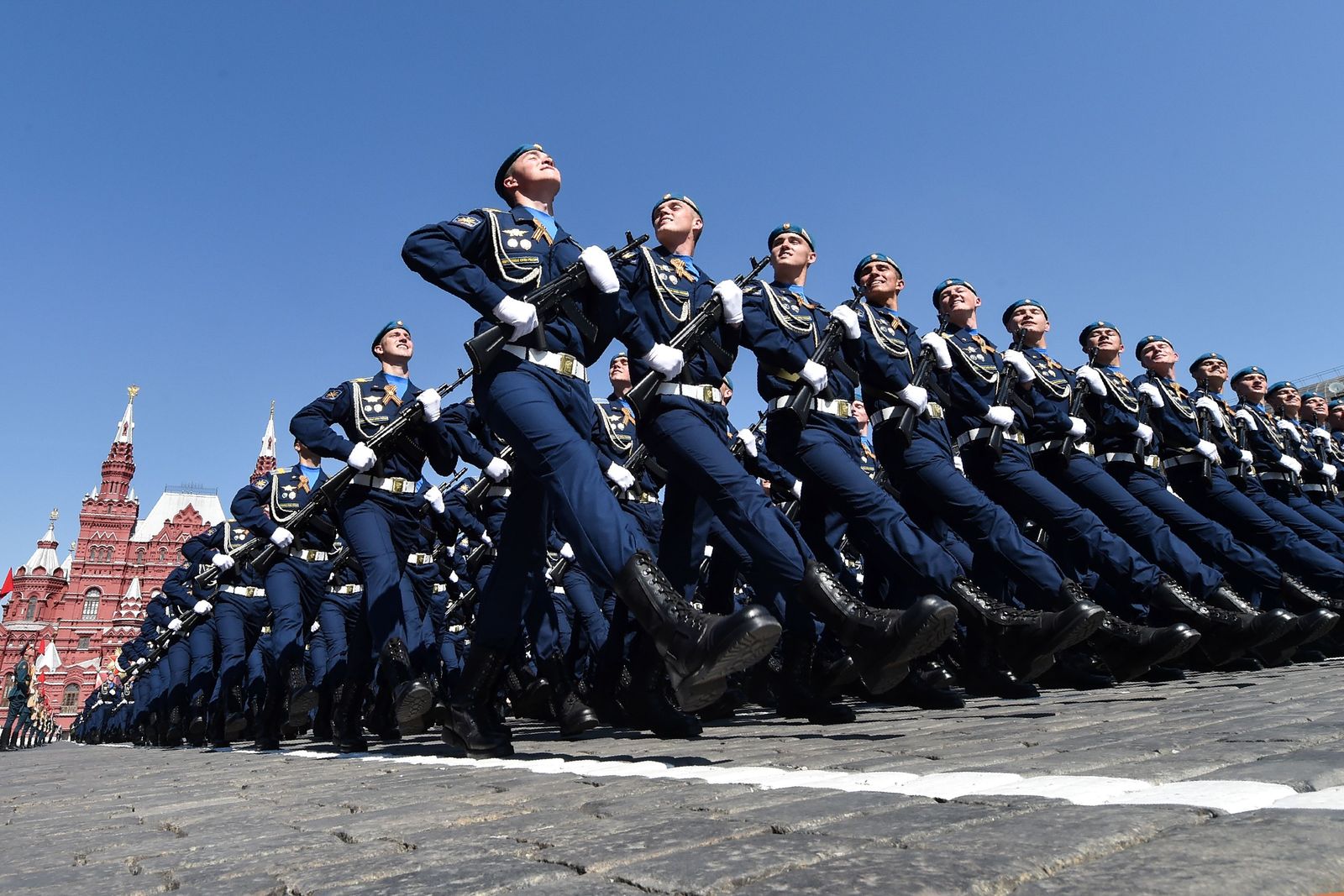 Russian troops marching on Red Square during the Victory Day military parade in May.