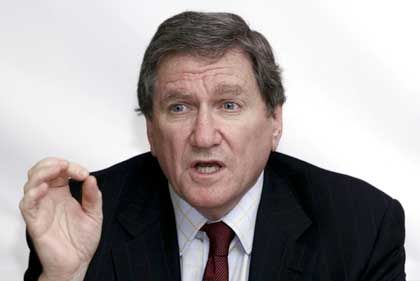 Former US ambassador to the UN Richard Holbrooke: "I think there will be some form of disengagement from the Battle of Baghdad."

SPIEGEL ONLINE: Mr. Ambassador, former German Chancellor Helmut Schmidt is one of the founding fathers of what has since become the G-8. He attended the first summit in Rambouillet in 1975. This week, however, he criticized the G-8, dismissing it as an overly exclusive club and saying that India, China and other countries should be a part of it. What's your take?

Holbrooke: I agree completely with Schmidt about China and India. The current configuration of the G-8 does not reflect global realities. If they're going to talk about things like climate change and carbon emissions, China is the No. 2 polluter in the world after the United States and India's very high up on the list. They should be part of it. In terms of political influence, G-8 has four of the five permanent members of the United Nations Security Council -- Britain, France, Russia, the US -- so why not have the fifth? When the G-8 was established in the 1970s, it was just supposed to be an informal gathering. Today there is too much choreography and too little spontaneity at the G-8 summit and that's the point Schmidt was trying to make.

SPIEGEL ONLINE: Mr. Ambassador, recently you have said repeatedly that you believe the situation in Iraq is a greater foreign policy problem for the United States than the Vietnam War in which you served. How did you come to this conclusion?

SPIEGEL ONLINE: What is your opinion of the possibility of an immediate and complete withdrawal of American troops from Iraq?

Holbrooke: There is zero possibility of a complete and immediate withdrawal under President Bush.

SPIEGEL ONLINE: What about later, under the next president, who could come from the Democratic Party?

Holbrooke: Under the next president, whether Democratic or Republican, I think there will be some form of disengagement from the Battle of Baghdad. Notice that I use the word disengagement and not withdrawal.

SPIEGEL ONLINE: But what would happen to Baghdad if the Americans pulled out?

Holbrooke: I don't know. But I need to say something very clearly here: The president's rationale for staying in Iraq is no longer democracy or weapons of mass destruction. It's not even a stabile government anymore. He doesn't even produce that as the reason. His answer for why we have to stay in is to avoid a mess. Well, it already is a mess. You cannot ask people to die simply to avoid something. If they risk their lives, they have to risk it for a positive outcome. The president has to produce that outcome, define it and work towards it. Secondly, the Iraqis are not pulling their own weight, so we have an extraordinarily difficult situation.

SPIEGEL ONLINE: In Iraq, you speak of a "disengagement" rather than withdrawal. Can one interprete this as spelling the end of the American strategy of interventionism, one that you championed during the Balkans war?

Holbrooke: Well, I've been called a liberal interventionist by some people, and I think there's some accuracy to that. I supported intervention in Bosnia and Kosovo, I would support it in Darfur. But we can't intervene everywhere all the time. But above all, if we intervene, there are two absolutely critical criteria. It should be a collective action with our allies and secondly it should succeed.

SPIEGEL ONLINE: What is your assessment of the current situation in Afghanistan?

Holbrooke: I support very strongly the initiative in Afghanistan, but it is not going well right now. We have to do better. The drug program has been a failure and a colossal waste of money. The Karzai government is not as strongly supported as it used to be. The Taliban is using Pakistan to regroup and that problem has not been addressed successfully. So these issues have to be dealt with very aggressively. But we can't walk away from Afghanistan.

SPIEGEL ONLINE: What role do you think German troops should play in Afghanistan and other crisis regions?

Holbrooke: Germany has a vital role to play in international peacekeeping under the authority of the United Nations in Afghanistan, Lebanon and Darfur. And I hope Germany will accept that as a responsibility of a great nation. World War II is more than 60 years behind us. No person in public leadership today was involved in that war and the new generation of Germans are among the most democratic, humane and forward-looking people in the world. Are they going to turn their back on the rest of the world? I hope not.

SPIEGEL ONLINE: What changes do you think Europeans should expect to see in US foreign policy if a Democrat is elected as the next president?

Holbrooke: The Democrats are more or less united on disengaging from Iraq, on pursuing the war in Afghanistan and conducting a diplomatic policy which puts more stress in strengthening our relationship with our allies. America has lost a lot of respect in many parts of the world and the next president, whoever it is -- Republican or Democrat -- has to try to restore that. In addition, we must also repair our ruptured relations with Turkey.

SPIEGEL ONLINE: You recently visited Turkey. Are you concerned about the state of democracy there?

Holbrooke: Turkey is at a historic moment in its determination of its future. On July 22 there will be an election. That election's outcome and how the military reacts to it will have a great deal of impact on the future of Turkey's application to join the European Union and on Turkey's own view of itself. The government of Prime Minister Recep Tayyip Erdogan has done an extremely good job in most areas. It has improved the economy, it has reached out and opened negotiations with the European Union, but it has created some controversy over the headscarf issue. Turkey is the only country I know in the world where the major issue is a piece of cloth that women wear over their heads.

SPIEGEL ONLINE: Do you think that Turkey should be allowed to join the European Union?

Holbrooke: Europe needs Turkey, and it should not push it away toward the more extreme Islamic states such as Iran and perhaps Iraq. It would take 8 or 10 years, but EU negotiations can bring Turkey to implement more reforms. It has already happened. I know a lot of Europeans, particularly here in Germany, say, 'Oh, we'll be flooded by Turks if we open up membership.' First of all, you've already got millions of Turks in Germany and the country hasn't suffered from it. The more the Turks are integrated into German society, the stronger your country will be. Secondly, the Turks are willing to put limits on the amount of immigration from Turkey to the EU, so that problem can be dealt with.

SPIEGEL ONLINE reporter Sebastian Fischer interviewed Holbrooke in Munich, where the former ambassador attended a ceremony to present the first-ever American Academy Henry Kissinger Prize. The award was presented to former German chancellor Helmut Schmidt for his contributions to the trans-Atlantic dialogue.