SPIEGEL: Mr. President, right now the soccer World Cup is taking place and the world is looking to Africa in a way seldom seen before. Why is it that 50 years after independence, many African countries are still lagging so far behind?

Kagame: It is true, we are lagging behind. Unfortunately. There are a number of reasons for it -- historical, cultural, and not least, reasons that we ourselves have caused. We are far from exhausting our potential and resources.

SPIEGEL: Why is it that statesmen who are not corrupt and do not line their own pockets are still the exception in Africa?

Kagame: I admit, this is a problem. But I can not absolve the West completely of guilt. There were corrupt leaders, and the West not only stood firmly behind them, but also sometimes encouraged even more corruption.

SPIEGEL: China, which has since become an industrial power, now appears to be growing into a role in Africa formerly held by the West. Do the Chinese have a more honest interest in Africa?

Kagame: To me it is not a question of whether China or the West has more honest intentions with us. It is about something else. Why don't we talk about how we can get on our feet on our own? We do not always want to be the victims and to serve as a battleground for foreign interests.

SPIEGEL: Your continent has long been comfortable in the role of the dependent.

Kagame: That is true. We complain about the Chinese, who take our natural resources, pollute the environment and leave nothing behind. Or about the West which, although it does not pollute the environment, also leaves nothing behind. We must take stock of our potential and resources and consider how we want to use them ourselves -- and also how we can do business with China or the West without getting exploited.

SPIEGEL: Most of your presidential colleagues in Africa are pleased with the billions of euros from the West that are flowing to the continent. In Rwanda, you impose tight restrictions on Western donors. What do you have against aid from abroad?

Kagame: The instances of aid that we have criticized were always those which created dependencies. Aid makes itself superfluous if it is working well. Good aid takes care to provide functioning structures and good training that enables the recipient country to later get by without foreign aid. Otherwise, it is bad aid

SPIEGEL:  which has become the unfortunate norm in Africa.

Kagame: Yes, because the West is anything but altruistic. I often wonder why the West is much more interested in aid deliveries than in fair trade, for example. The fair exchange of goods would place far more money into the hands of the affected people than relief operations. I do not want to be cynical, but if developing nations are kept backward by being told, again and again, you belong to the poor and you are there, where you actually belong, then nothing will change.

SPIEGEL: Do any countries serve as role models for you on the path to becoming a modern state?

Kagame: There are things I admire, for example, about South Korea or Singapore. I admire their history, their development and how intensively they have invested in their people and in technology. It was not so long ago that they were at the same level of development as we are. Today, they are far ahead of us.

SPIEGEL: There are fair elections in South Korea. In your case, however, opposition leader Victoire Ingabire is under house arrest, newspapers are forbidden and parties are not permitted. That is not what democracy looks like.

Kagame: The Rwandan Media High Council is responsible for the banning of the two newspapers. And it is an independent institution. One of the newspapers compared me with Adolf Hitler, and another spread false gossip stories. To be honest, I would have banned the papers long ago. Incidentally, editors are also fired in Europe if they write nonsense.

SPIEGEL: But no unpopular newspapers are banned. And in Rwanda, leading opposition politicians are imprisoned.

Kagame: Victoire Ingabire's deputy, who returned to Rwanda from exile in January, was actively involved in the genocide of the Tutsi

Kagame: He was traveling under an assumed name, he has since admitted his involvement in the genocide, and a court convicted him. And yet the international media is nevertheless still writing, as before, that opposition leaders are being arrested in Rwanda.

SPIEGEL: You placed your most dangerous challenger, Victoire Ingabire, under house arrest.

Kagame: We now know that she has supported the Rwandan Hutu militias, who are now fighting in East Congo and are designated by the UN as terrorists. We have evidence that she was there and that she transferred money to them.

SPIEGEL: You are expected to be safely re-elected in early August. You no longer have any serious challengers.

Kagame: I am not responsible for a strong opposition. After all, we have a special past: almost 1 million victims in a hundred days of genocide. We want to put the country back on its feet. And we have a different way of dealing with that than others.

SPIEGEL: How much progress have you made with reconstruction?

Kagame: Today's Rwanda is a different country than it was 16 years ago -- in almost every respect. The people have enough to eat, there is health insurance and schools. Earlier, we had 800,000 school pupils, but today 2.3 million children are learning in primary schools, free of charge. The private sector is growing. A lot has happened. We give the people jobs and food, which also gives them a sense of dignity. If they have nothing to eat, then democracy is meaningless to them. Democracy holds little appeal for people who are struggling to survive.

SPIEGEL: With those arguments, you open the door to abuse of power. Many African potentates have used the same lines to justify their dictatorships.

Kagame: Why does the Western notion of democracy also have to be the right one for us? The difference is that the West has institutions that can punish the misconduct of individuals. What drove Rwanda and Africa into decline was the fact that certain people weren't held accountable. When we move to make corrupt mayors or officers answer to the courts, people always immediately say that we are repressive. But should we allow these people to continue to get away with it?

SPIEGEL: Even today, your country still doesn't appear to have completely reconciled following the tragedy of 1994.

Kagame: Reconciliation takes time. Sometimes many decades, as the example of Europe shows. It is hard work. How do you deal, for example, with people who are still moving freely despite the fact that they should actually be punished? Of the four categories of offenders that we introduced in 1994, from supporters to the instigators and masterminds of the genocide, we have already eliminated the two most harmless categories -- we do not want to pursue these people any further. Of course, it is difficult for the families of the victims of the genocide to accept that.

SPIEGEL: Are you also dealing with your own personal history through your policies?

Kagame: My story is one of suffering and endurance. I was three and a half when we had to flee because of pogroms against the Tutsi from Rwanda. I grew up in a refugee camp in Uganda, and I lived there for 30 years. That shapes one's character. I constantly asked myself: Why is this misery and hunger returning to us in the camp? And why does the rest of the world remain quiet? I had to fight hard for everything. I wanted to get out. I want to take my destiny into my own hands and escape the vicious cycle of retaliatory violence. This struggle has shaped who I am to this day. 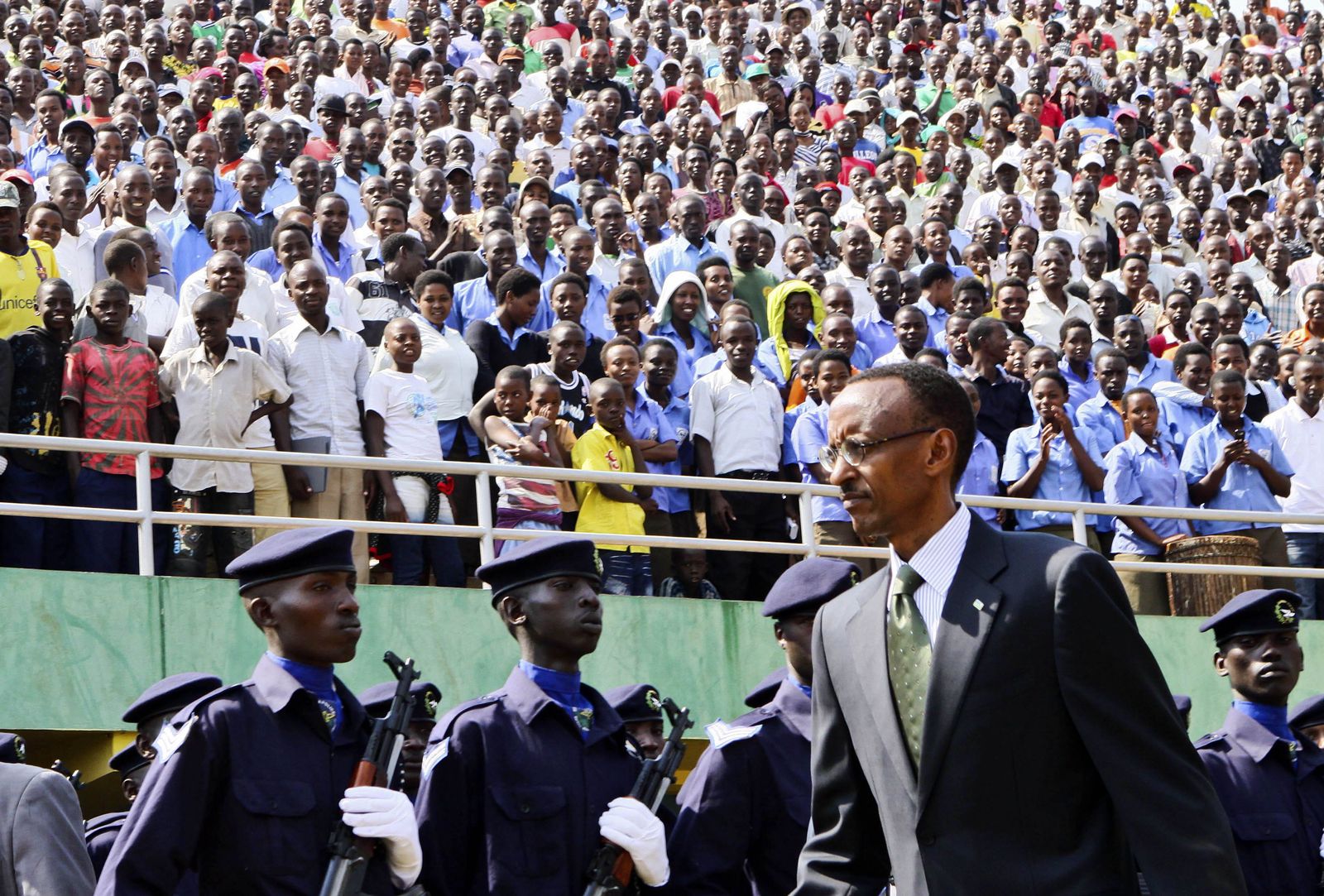 Rwandan President Paul Kagame reviews troops at Amahoro Stadium in Kigali during the Liberation Day ceremonies marking the 16th anniversary of the end of the 1994 genocide.