SPIEGEL ONLINE: Professor Dawkins, your book "The Greatest Show on Earth: The Evidence for Evolution" has just been published in Germany. The German title, though, is "The Creation Lie: Why Darwin Is Right." Are you happy with that?

Dawkins: Not entirely, because it seems to be steering into the direction of negativity. The English title is a positive one. It's uplifting, it's supposed to be exulting, extolling the beauty of life and the beauty of understanding life, whereas the German title is critical and sort of attacking. This is in the book, you can find it there. But the title creates a different emphasis.

SPIEGEL ONLINE: What emphasis did you have in mind for the book?

Dawkins: A positive, almost romantic view of life as something that is beautiful and explicable and beautiful because it is explicable. But there is the negative side, as well. It is an attempt to disabuse people, especially in America, but also in other parts of the world, who have become influenced by fundamentalist religion into thinking that life can be and should be explained as all designed. I regard that as a lazy and unhelpful explanation as well as an untrue one.

SPIEGEL ONLINE: You never experienced a religious phase in your life?

Dawkins: Of course. I was a child, wasn't I?

SPIEGEL ONLINE: You think religion is something we should move beyond as we enter adulthood?

Dawkins: You know what St. Paul said: When I was I child, I spoke as a child. But when I became a man, I put away childish things.

SPIEGEL ONLINE: Has religion not been very successful in an evolutionary sense?

Dawkins: The thought that human societies gained strength from religious memes in their competition with others is true to a certain extent. But it is more like an ecological struggle: It reminds me of the replacement of the red by the gray squirrel in Britain. That is not a natural selection process at all, it is an ecological succession. So when a tribe has a war-like god, when the young men are brought up with the thought that their destiny is to go out and fight as warriors and that a martyr's death brings you straight to heaven, you see a set of powerful, mutually reinforcing memes at work. If the rival tribe has a peaceful god who believes in turning the other cheek, that might not prevail.

SPIEGEL ONLINE: But following a religion that does not promote the chances for survival seems to contradict evolutionary logic…

Dawkins: Oh yes, clearly there is a conflict between meme and gene survival. We are familiar with such conflicts. They sometimes work out one way, sometimes the other.

SPIEGEL ONLINE: But religion is not always aggressive, it has a soft side as well. It offers comfort and consolation. At one point in your book, you even quote a bishop to make your case.

SPIEGEL ONLINE: It seems unlikely that a true creationist would even read your new book, let alone be converted into an evolutionist. Plus, your usual readership hardly needs to be convinced that evolution is a fact. For whom did you write "The Greatest Show on Earth?"

Dawkins: Mostly for people sitting on the fence. It's supposed to be about the evidence for evolution. I didn't seriously think that I could change the minds of rabid fundamentalists. They wouldn't read it anyway. But I suspect there may be many thousands of people who would be genuinely interested. People who don't need their minds changed so much as just tipped over the fence one way or the other because they haven't really thought about it much.

SPIEGEL ONLINE: Aren't you afraid that some of these people might be alienated by the sometimes strong language in the book?

Dawkins: What strong language do you mean?

SPIEGEL ONLINE: You call your opponents "Holocaust-deniers," "ignorant," "ridiculous" and "deluded to the point of perversity."

Dawkins: My suspicion is that more people will find it amusing. If I read an author who is ridiculing some idiot, I myself am rather amused. There may be some who will be turned off and I will have lost them in those passages. But I suspect they'll be outnumbered by those who are amused.

SPIEGEL ONLINE: In your book, you argue that the theory of evolution is on the same level as a mathematical theorem. Are you not just as dogmatic as the religious fundamentalists among your opponents, as some of your critics claim?

Dawkins: There was a time when people thought the world was flat. Then it became a hypothesis that the sun was the center of the universe, and then there was the hypothesis that even the sun was not the center of the universe. In the ordinary language sense of the word "fact," is it a fact that the earth orbits the sun and the sun is part of the Milky Way galaxy. There's never a hard and fast line when something ceases to be a hypothesis and becomes a fact. You realize with hindsight, that something has become a fact. Philosophers of science, of course, will say that nothing ever becomes a true fact, that everything is just a hypothesis that can never be adequately proven and that we could all wake up one day and discover that everything was just a dream. But in so far as the general public ever uses the word fact, evolution is one.

SPIEGEL ONLINE: Without any question marks? Isn't the theory of evolution still open to modification?

Dawkins: Yes, of course! Certainly it is genuinely disputed for example, how much of evolution is driven by natural selection and how much is driven by random chance. That is a genuinely open discussion, open to new evidence.

SPIEGEL ONLINE: Do you see a possibility that the theory of evolution, as we now see it, could become an element in a broader system of thought if, for example, we discover life on exoplanets?

Dawkins: There is, of course, precedence for well established ideas in science becoming enveloped in a larger scheme. I am very interested in the possibility of extraterrestrial life. There are a lot of questions we should think about more: How much of what we know about life on this planet had to be true, because there is no other way for life to be? And how much of it is just a local, parochial fact about life on this planet?

SPIEGEL ONLINE: How do you mean?

Dawkins: Would it not be very bold to claim, that all life has to be based on DNA? But perhaps we could say that every life form has to be based on something sufficiently like DNA. On this planet the replication function is occupied by DNA, the executive function by proteins, they are strictly separated. Did that have to be true, is it universal? Or could there be other forms of life, in which one molecule does both? All these are really open questions, because as of now we only have one sample of life.

SPIEGEL ONLINE: Mr. Dawkins, how would you like to be remembered 60 years from now? As the scientist who left his impact with books like "The selfish Gene?" Or as an outspoken, zealous critic of religion?

Dawkins: Both really. I don't see them as that separate from each other. But I would be sorry if the attack on religion eclipsed what I hope I contributed to science. I think that would be a genuine pity. But I don't see any contradiction between the two aspects. I think they belong together.

SPIEGEL ONLINE: What are we going to see from you next?

Dawkins: I am halfway through writing a children's book which is called "The Magic of Reality." Each chapter is a question like: What is an earthquake? What is a rainbow? What is the sun? Each chapter begins with a series of myths seemingly answering those questions, and then I counter that with explanations about the true nature of things. There is something very cheap about magic in the supernatural sense, like turning a frog into a prince with a magic wand. Reality has a grander, poetic magic of its own, which I hope I can get across. 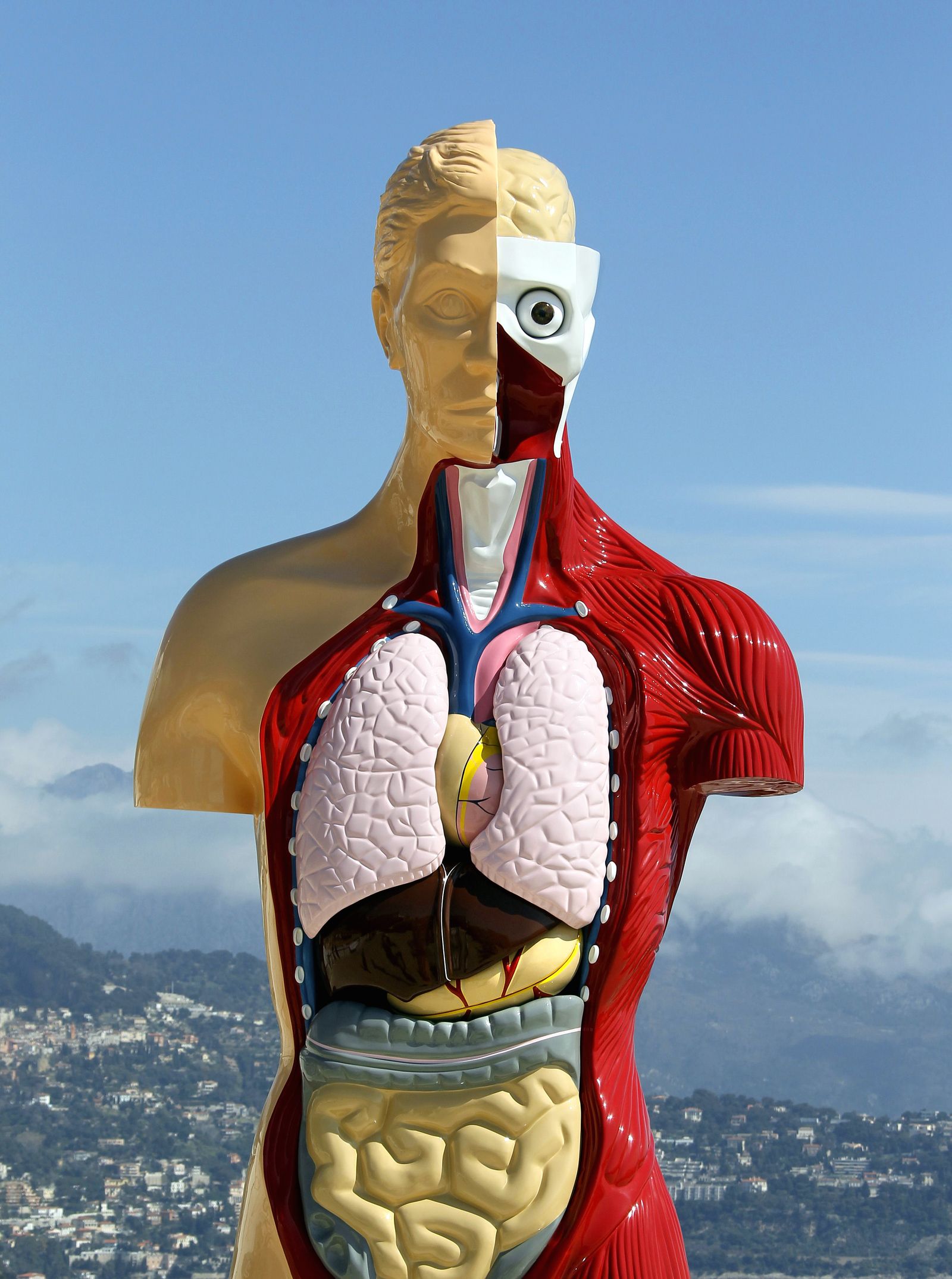 A sculpture by the British artist Damien Hirst. Is evolution a fact?