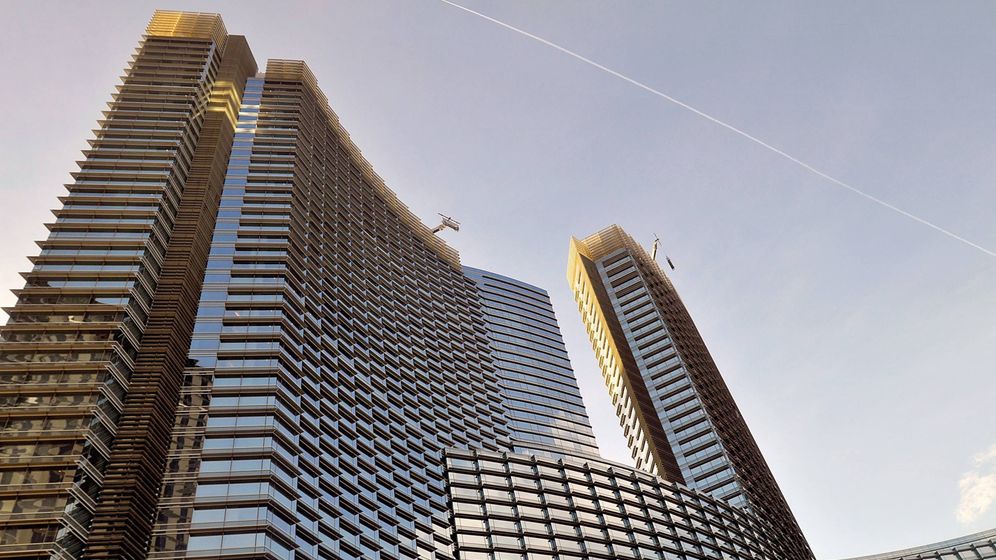 SPIEGEL ONLINE: Mr. Libeskind, you are the designer of "Crystals", a gigantic shopping center that is part of the $8.5 million CityCenter complex in Las Vegas, the largest privately financed building complex in the history of the US. You designed the retail centerpiece complete with luxury stores such as Tiffany, Gucci and Prada. Isn't all that a little anachronistic in these times of economic crisis?

Daniel Libeskind: On the contrary. Projects that are very bold and have a financial value that lasts are really important, especially in times when people don't have money. This is not the time for mediocre projects. Only in crisis times like these do people go out and do extraordinary things. This is how the Empire State Building or the Rockefeller Center got built.

SPIEGEL ONLINE: The Empire State Building was built during the Great Depression but was not profitable for 20 years.

Libeskind: True, we won't see any more projects like CityCenter in the next few years. But the vision of my clients was extraordinary. It's a vision of the future. It's clear that this kind of architecture is ahead of its time in many, many ways.

SPIEGEL ONLINE: You don't agree with critics like Christopher Hawthorne of the Los Angeles Times, who called CityCenter "one final echo of the boom years"?

Libeskind: Great visions that transform cities are not going to disappear. We won't lose heart and start building smaller houses now. Of course this is a difficult time for many. But it's also a good time to rethink architecture, to rethink what it is we're doing here.

SPIEGEL ONLINE: So what is it you're doing in Las Vegas?

Libeskind: My idea was to erase the separation between commerce, culture and entertainment. We're so used to having museums here, housing there, and so on. I wanted to create a bold architectural space that is transgressive. So "Crystals" is more like a spectacular museum where you can buy a Gucci bag.

Libeskind: It's kind of ironic: Whenever I built a cultural project -- and I've built many museums -- the client always wants to make sure that it is commercially viable, that the museum shop would make money too. But the same is true for commercial clients. They want to make money, yet their interest lies in raising the cultural value, too.

Libeskind: It always has been. Look at the lively streets in cities that we love and appreciate. My idea here was to expand the urban space of the Vegas Strip and make it a magnet for people to walk around.

SPIEGEL ONLINE: But Las Vegas doesn't really have an urban space. It's all hotels and casinos and fantasies played out in concrete.

Libeskind: Absolutely. The streets are the only urban space here. What I did with "Crystals" was a very radical redefinition of the space of Las Vegas. Usually its very illusionist, very kitschy, it's all about nostalgic dreams of other places. "Crystals" is unashamedly contemporary. Other places in this city have no daylight. We invited the daylight in. It's also the largest building in the world that's gold-certified (editor's note: the second-highest certification within the Leadership in Energy and Environmental Design Green Building Rating System).

SPIEGEL ONLINE: Still, this must have been extremely hard to build. One half of the money comes from MGM Mirage, the other half from Dubai World, which is in the midst of its own financial struggles. How did they pull this off?

Libeskind: You'll have to ask MGM Mirage that question. For me, it's mind-boggling that this project happened in such a short time, and all at once. And then you look out of the window and the rest of Las Vegas seems to be in a different time zone.

SPIEGEL ONLINE: Speaking of which, your project -- the rebuilding of the World Trade Center in New York City -- has been struggling for years. Your original vision has been radically altered. Are you still involved at all?

Libeskind: It's a highly complicated project. You don't just have one client, not just one investor. You have the 9/11 families, the two governors of New York and New Jersey, the behemoth that is the Port Authority with 7,000 or so engineers, the Metropolitan Transit Authority, the Path Authority.

SPIEGEL ONLINE: In regard to the Ground Zero project, the New York Times has described you as "the incredible shrinking Daniel Libeskind". Aren't you frustrated?

Libeskind: Sure. A project like this costs money, it relies on the economy, and that can be frustrating. But the consensus is still very much based on my master plan from 2003. Of course it's a tough project to work on. But I live and work next door to Ground Zero and there's a lot happening. The memorial is growing, the streets are being connected, the Freedom Tower is under construction, a couple of the other towers have been started. But how quickly this will be built depends on money.

SPIEGEL ONLINE: That project has been dragging on for seven years now.

Libeskind: Look at how long it took to build the original World Trade Center towers (editor's note: almost eight years from development to completion). Don't forget, this is a 6.5 hectare (16 acre) site, with 10 million square feet of office space. It's not just a memorial or one tower. It's like a whole American city.

SPIEGEL ONLINE: Many projects by your famous colleagues in Manhattan -- Norman Foster, Frank Gehry, David Childs -- have been scaled down, put on hold or completely scratched because of the recession. How's the mood in your business?

Libeskind: This is a difficult time, no doubt about it. But people are beginning to see some glimmers of hope. I'm lucky, I'm very, very busy. I work all over the world and that probably helps.

SPIEGEL ONLINE: You also work in Germany. But one of your projects here, a university annex in Lüneburg, has caused controversy, with critics saying it is too large and pompous and that there are doubts about its financial feasibility. What's happening there?

Libeskind: We hope that it's going to happen soon. It's a work in progress. I don't know a date but this has to get through many different hoops, before it is approved.

SPIEGEL ONLINE: Wouldn't it be easier to build without involving politicians?

Libeskind: That's such an abstract question. Architecture is a public art. It is not about some sort of genius sitting by himself in his studio. You need a lot of money, even for smaller projects. I'm finishing a house in Connecticut right now and even a small house needs an effort. And you'll always have a public frame around it. Those are the limitations -- but also the core -- of architecture. It's highly civic. I actually believe that it's becoming even more so, that people want to be more and more involved today. The best thing for Ground Zero was the early phase when the public was involved. That's the very nature of democracy.

SPIEGEL ONLINE: How's the public reaction been in Las Vegas? People there aren't really used to open spaces with windows and glass and daylight.

Libeskind: Everyone I talk to is very enthusiastic. We created 12,000 jobs here. That's not a small achievement.

SPIEGEL ONLINE: So bigger and grander is the way to go, even today?

Libeskind: When the clients first came to me, even I thought they were a little crazy. But you have to be.