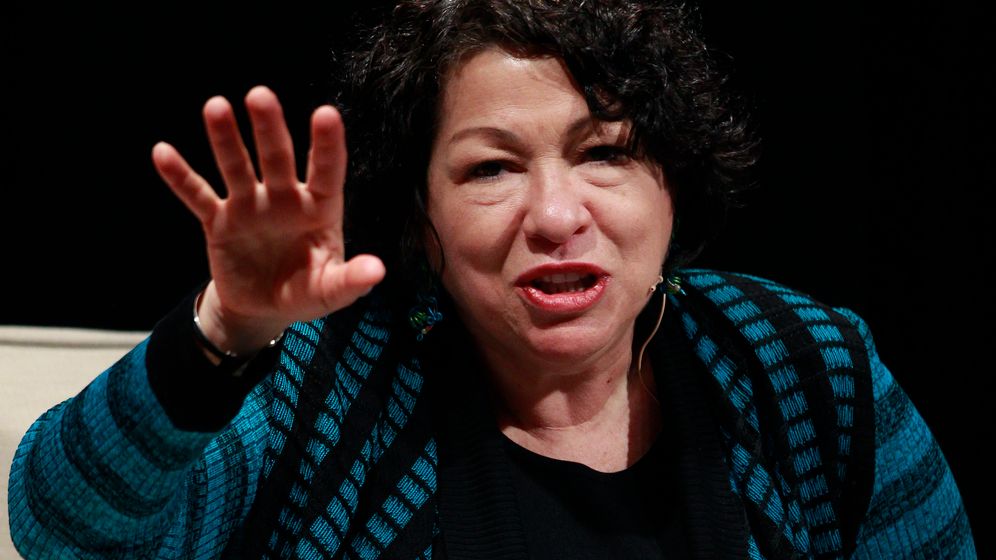 In nominating Sonia Sotomayor to the United States Supreme Court in 2009, President Barack Obama said he was deeply impressed with her "extraordinary journey." And his decision was almost as historic as his own election. Sotomayor, who grew up in a New York housing project as the daughter of Puerto Rican immigrants, became the first Latin American justice in the 225-year history of the court, and only the third woman to serve on the high court.

Sotomayor describes her path to the top in her memoirs, "My Beloved World," which will appear in German bookstores later this month ("Meine Geliebte Welt"; C.H. Beck, München; 334 pages; €19.95). With disarming openness, she writes of her father, who died of alcoholism, of her mother who worked long hours in a hospital and of the strict nuns at her school who suggested that she limit her aspirations to that of being a mother and housewife. And she describes how she was later able to conquer one male bastion after the other, first at Ivy League universities Princeton and Yale and later as a lawyer and judge in New York.

SPIEGEL: I just noticed the little sign hanging from your door handle: "Well-behaved women rarely make history." Is this your life's motto?

Sotomayor : You know, it's almost a life motto. If you read the book, you know I'm very law abiding. But I make it very clear that, like all people, there are exceptions. I like driving fast. I'm a pure New Yorker and I jaywalk. None of us is perfect. Sometimes you have to do the unexpected.

SPIEGEL: You have done many things in your life that no one would have expected from you. The little girl whose parents hardly spoke English now has the final say in all legal issues in the country. How did you come so far?

Sotomayor : I think adversity. That determination that I have in myself, both to work hard and to succeed, came from adversity, from managing it, from maybe not overcoming it because I still manage my diabetes. I couldn't overcome my father's alcoholism. But I was able to find ways to escape the sadness in our house that were positive -- for example, I found books. And that was not only a wonderful escape, but also the launching pad for my future. It helped me imagine a world bigger than the one I was in.

SPIEGEL: Your story sounds like the cliché of the American dream: Even when all the odds are against you, if you work really hard, if you persist and don't give up, you can make it to the very top. Do you believe this is true?

Sotomayor : (Laughs): Well, I'm living proof of it. No, seriously, as I say in my book, not everyone can make it to the top. The top doesn't have many people. And so if you think that working hard is going to make you reach all your dreams, you might live your life disappointed. But if you work hard and you have a dream, you're going to arrive further than you started. You're going to learn something in the process.

SPIEGEL: You had role models in your own family. Your mother worked all day as a nurse to support you and your brother. Then there was your grandmother, whom you call the matriarch of the clan. How did these women influence you?

Sotomayor : I never doubted, unlike some of my female friends when I was growing up, that I had to have an occupation. My mother was more worried about my going to college than she was about my brother. She just assumed he would go to college, which was a good assumption because boys went to college and a lot of girls didn't. But after my father died, she said to me: I did not expect to be alone. But I'm glad that I have a profession where I can support you. I want you always to be able to support yourself. Watching my mother raise us gave me a sense of independence that makes me equally comfortable being married, as I was, or being engaged. But when I don't have a partner, like now, I don't feel incomplete. I hope that I will meet someone again, but I think there is some comfort in liking yourself enough to be comfortable in your own world.

SPIEGEL: In your book, you address the end of your marriage. When you separated after seven years, your husband told you that he was always proud of your success, but that it was difficult for him to keep up with you and that he felt that you didn't really need him.

Sotomayor : When he first said that to me, I thought he meant "need" in the sense of dependency.

SPIEGEL: In the sense of him being the provider?

Sotomayor : Exactly. If he meant that, I knew that he was right, that was not the role I wanted for him. But now that I'm older and thinking about it more, there is something in a relationship where you have to make the other person feel important. You have to make sure that they understand that they serve an important part of your own identity.

SPIEGEL: Could it be that many men are just not ready for women like you?

Sotomayor : I think they're growing that way. There are more men these days who have found a way to let their wives shine. I know of many couples now where the woman is pursuing her career and the man is raising their children.

SPIEGEL: As a student at Princeton, you told your family that the role of women was nothing but a cultural construct. Do you still believe that?

Sotomayor : Oh, that's a philosophical question with no answer. My colleague, Justice Stephen Breyer, told us about a lecture that he attended or an article he read where someone said that discrimination on the basis of gender will take longer to correct than discrimination based on race because there is a physical difference between men and women that you cannot deny, and that that difference will in itself always create an inequality. I can't say that it's all cultural. I think it's more complex than I thought back then.

SPIEGEL: When you arrived at Princeton, they had only recently begun admitting women and there were not many Latin American students. Princeton had a reputation for being a northern bastion for white men from the South. What was it like to study in that environment?

Sotomayor : I was the only woman in a Roman law class. And the professor was a more senior professor. He must have been teaching the course for 20 or 30 years, and he taught the course (from) notes that he must have had for years. As he went through his lecture, he would reach a point where he would suddenly stop, look at me, and then skip the joke he was about to tell, which was clearly, he recognized, a sexist joke. I will never forget that. There were still all-male clubs at Princeton, and there were clearly men who preferred to belong to those all-male clubs rather than to the co-ed clubs. And there were professors who had taught all males, like this one, who were just more comfortable with teaching men. But as with the beginning of any social experiment, there were people who were trying very hard to make it work, who supported me.

SPIEGEL: Affirmative action also helped you back then. In Germany, there is a heated debate right now over a comparable instrument: that of mandating quotas for women in management. What do you think of that idea?

Sotomayor : In the United States, certain segments of society played with quotas for a number of years. What ended up happening is that the larger population got angry. And the Supreme Court ultimately said that quotas were not acceptable under the US Constitution. I think that some of it is driven by the American concept that success should always be based on merit. The problem with that concept, I think, as most people know, is that success is not always about merit.

SPIEGEL: Being a woman of Latin American descent, you were an exception not only at Princeton, but also at the law firms and the courts where you worked later on. You had a reputation of being a "tough cookie" and of arguing like a man. Did you consciously try to adopt male behavior?

Sotomayor : No, that's just who I am. I have a style that is Sonia, and it is more assertive than many women are, or even some men. And it's a style that has held me generally in good stead. There's nothing wrong with being a little bit quieter than me or more timid than me, but if you're doing it all of the time and not waiting for the moments where you need to be more assertive and take greater control, then you won't be successful. And I don't think I would have been successful if I didn't know how to soften myself and tone it down at important moments.

SPIEGEL: What role do you think your life experiences play in your decision-making at the Supreme Court?

Sotomayor : Life experiences play a role in every judge's judging because we are creatures of our experience. Forget about race, gender or poverty; think about legal experience. Prosecutors have a view of the criminal justice system. Defense attorneys have another. We're known as a very pro-prosecution court on many issues. Well, there are no defense attorneys on our court. So how does this influence us? I think your experience makes you more sensitive to certain arguments people are making and perhaps a little less receptive to arguments the other side is making. That's why we have nine judges and not one making these decisions in the hope that pooling our experiences help us find a better balance.

SPIEGEL: You have achieved everything there is professionally; you will be a Supreme Court justice for the rest of your life. Do you love the work you're doing as much as you thought you would?

Sotomayor : I enjoy it, but I had not anticipated how difficult it would be. When the Supreme Court takes a case, it's because there is a disagreement among the courts below. It means that the issues are not clear under existing law. All of that lack of clarity is usually around issues that are important to the society -- like Obamacare, same-sex marriage -- and every decision we make is final. Every time we decide, even when I'm in the majority and I think we're right, you know that there's a loser. There is another side who is going to feel something negative about what has happened. And that makes this job harder. Once we decide, there is no more hope.