SPIEGEL ONLINE: Mr. Minister, what do you think of the vote that America has cast?

Moallem: I am happy about the result of the American election and I congratulate President-elect Barack Obama. I hope that he will help us make a dream come true: a Middle East of peace, of stability and prosperity. There is no way around it: To achieve this, Americas role is central.

SPIEGEL ONLINE: Syria is a neighbor of Iraq, Israel, the Palestinian territories -- and it is Iran's best friend. Which Middle East conflict would you like to see Obama tackle first?

Moallem: The Arab-Israeli one because this conflict aggravates and fuels all others. This truly is the time to come to a comprehensive peace between Syria, Lebanon, Israel and the Palestinians.

SPIEGEL ONLINE: Obama is hardly in a position to solve this alone. What can Syria offer him?

Moallem: Our readiness for dialogue, our moderation.

SPIEGEL ONLINE: The new US president would probably even be happier if you stated that you are fundamentally opposed to a nuclear-armed Iran.

Moallem: I am even advocating a whole Middle East without weapons of mass destruction. Israel has nuclear weapons

SPIEGEL ONLINE:  but you have particularly close ties to Iran. How do you want to counter the concerns of the world and the incoming US administration about Iran's nuclear program?

Moallem: The Iranians have assured us that their program is peaceful and that they need nuclear energy. We trust them.

SPIEGEL ONLINE: Do you have have any first indications as to how Iran's leadership feels about Obama's election?

Moallem: We have not discussed this with our friends directly but I think that they understand quite well what this change in America means -- and how to deal with it. I am sure that the result of this election will improve dialogue.

SPIEGEL ONLINE: The US isn't the only country that will soon have new leadership; Israel also faces new elections. Could you imagine reaching a peace treaty with Benjamin Netanyahu if he were to become prime minister again?

Moallem: If it is based on (United Nations) Security Council resolutions and on the land-for-peace concept we will sign a deal with any prime minister of Israel.

SPIEGEL ONLINE: You are currently engaged in indirect negotiations with Israel in Turkey. Will these hold through the 10-week transition period until the new US administration enters office? 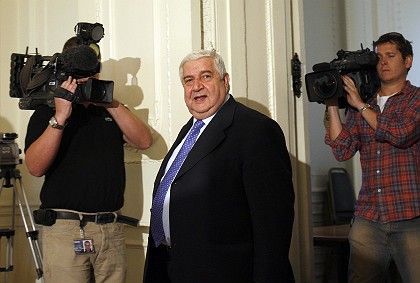 Syrian Foreign Minister Walid al-Moallem: "The Iranians have assured us that their program is peaceful and that they need nuclear energy. We trust them."

Moallem: These negotiations are now in the hands of the Turks. We hope that they can bring them back on track as they promised. Israel had asked the Turks to interrupt these talks because of the political situation in Israel.

SPIEGEL ONLINE: What do you see as the main sticking points in those talks, and where do you see room to maneuver?

Moallem: There is no room for maneuver. The Golan Heights, the territories occupied by Israel, are Syrian and it is our right to bring the line back to where it was on June 4, 1967.

SPIEGEL ONLINE: What about the question of the refugees?

Moallem: The right of return, as laid down in Resolution 194, does not mean that the 4 million Palestinians will return at once. Their right is clear, but they have to decide.

SPIEGEL ONLINE: Wouldn't this be a good time for Syria to get rid of the Hamas leaders whom you still harbor in Damascus?

Moallem: The Hamas leaders in Damascus are refugees. We are hosting them just as we are hosting a half-million other Palestinians. All of them, no doubt, are seeking to return to their homeland, but for that to happen they need to have their own state back.

SPIEGEL ONLINE: The new American president would likely welcome any move by Syria to cut its support for Hezbollah.

SPIEGEL ONLINE: What happened in the US last week and what will probably happen in Israel soon are democratic decisions. When will Syria become democratic? When will the Syrian government change as routinely as in the US, according to a democratic vote?

Moallem: God gave it that Syria is in the center of three major crises: Iraq with the Americans, Palestine (with its neighbor) Israel -- and Lebanon. This imposes on us the necessity to reform our country gradually and according to the challenges of our neighborhood.

SPIEGEL ONLINE: Will Syria stick with its plan to open embassies in Baghdad and Beirut?

SPIEGEL ONLINE: Even though US commandos started an air raid on a Syrian target from Iraqi territory two weeks ago?

Moallem: Yes. We know that Iraq is under occupation. It was American troops who violated our sovereignty. I hope that our good, neighborly relations with the Iraqis will not suffer.

'We Don't Want Syria to Experience What Iraq Has'

SPIEGEL ONLINE: American sources say that Syria knew in advance of the commando operation. Is that true?

Moallem: This is a fabricated story by the Americans. It has nothing of truth to it. They were confused, and they were late with their own statement from Washington. And then they leaked this story to the media. It is totally untrue.

SPIEGEL ONLINE: If it is untrue, then why didn't the Syrian army respond? Why didn't you protect your citizens?

Moallem: Frankly, we did not expect such an aggression. We don't understand why (it happened) -- especially now that Syria is exerting enormous efforts to tighten its side of the border. Anyway, we are not Georgia. We were seeking wisdom not to escalate the situation.

SPIEGEL ONLINE: The situation would improve even further if Damascus gave the International Atomic Energy Agency (IAEA) access to all the facilities in Syria it wants to inspect.

Moallem: Seven months after an aggression against a Syrian military position near Deir al-Zor, Israel went to the IAEA and claimed that Syria intended to build a nuclear reactor. This is totally untrue. We have allowed inspectors to visit the site. They spent three days there, they took samples and analyzed them. I assure you: They did not find the materials needed to build a reactor -- graphite, for example. They came to Damascus fulfilling a memorandum of understanding between Syria and the agency in which we allowed them to visit the site once.

SPIEGEL ONLINE: The IAEA would like to see three other sites as well.

Moallem: We do not want Syria to experience what Iraq has experienced. You remember the big American lies before the war in Iraq. Now they want to see this location, then they want to see three other locations and then, maybe, another four. We are not ready to repeat this. This will harm our national security.

SPIEGEL ONLINE: Part of Iraq's tragedy was that Saddam Hussein failed to clear up any doubts.

Moallem: We assure the world that we do not have any nuclear intention, no intention to build a nuclear military capability. It costs a lot of money, it is useless -- and the only country in the world that ever dared to use nuclear weapons was the United States.

SPIEGEL ONLINE: Do you think the changing of the guard in Washington will present greater opportunities?

Moallem: We have always been ready for dialogue with the Americans. Just six weeks ago I sat with Secretary of State Condoleezza Rice in New York. It was a very positive discussion and we agreed to follow up. But certain people in this administration disliked this opening and they wanted to block it -- with this air raid on Syrian territory.

SPIEGEL ONLINE: Do you think it is possible that the outgoing administration could repeat such a strike?

Moallem: With this Bush administration all possibilities are open. But this administration has a moral duty to pave the way for the new government in a positive manner. And the European leaders have a double responsibility to encourage stability in the Middle East and to inform the new administration about the need for cooperation between the US, Europe and the regional powers.

Moallem: We appreciate Minister Steinmeier highly because he was the first who opened up to Syria. I myself negotiated with him. We admit that we have gaps in our positions but we were determined to continue this dialogue.

Moallem: I don't know why she is skeptical. If I knew why, I would address her concern.

SPIEGEL ONLINE: She has repeatedly criticized Syria for its role in Lebanon.

Moallem: After the agreement of Doha, which Syria supports, after electing a new president and composing a government of national unity in Lebanon, after our determination to establish diplomatic relations with Lebanon -- after all this, I think, Madam Merkel would serve Lebanon better by opening up to Syria.

SPIEGEL ONLINE: In a best-case scenario, how do you see the Middle East in four years, when the US next goes to the polls?

Moallem: This will depend on America's new vision of the Middle East -- it cannot be a black-and-white one -- and it will depend on Israels political will to come to a comprehensive peace agreement. It will also depend on whether we regional powers act accordingly.

SPIEGEL ONLINE: Do you have a last word for the outgoing Bush administration?