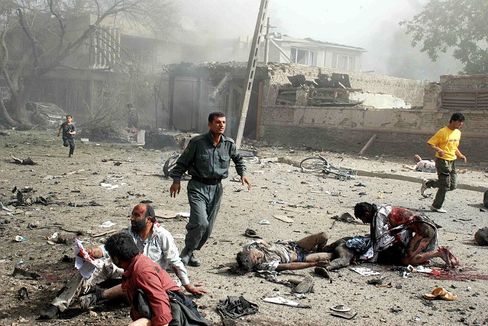 An attack on the Indian embassy in Kabul on July 7: Is the Pakistani army behind the insurgency in Afghanistan?

SPIEGEL: Mr. Saleh, is it possible the Taliban could win with its insurgency in Afghanistan?

Saleh: We have a lot of security problems, there is a lot of violence. But this is a violence unleashed with the help of Pakistan. They want to pull the brakes on us in order to hinder the coming elections. Afghanistan itself is not the source of the problem.

SPIEGEL: Who are these fighters who are not only killing Afghan and Western security forces, but also predominantly innocent civilians? And who is deploying them?

Saleh: The tribal agencies of Pakistan, like Bajaur and North and South Waziristan, are kept by the government as a strategic pool of fighters. From there, fundamentalist warriors are sent to fight in Afghanistan or elsewhere.

SPIEGEL: So you're saying the government in Islamabad has absolutely no intention of putting a stop to this militant movement?

Saleh: The international community has often asked them to stop allowing fighters to infiltrate into (Afghanistan) from the tribal areas. The answer from Pakistan is that they do not control the situation. When the Americans offered to fight the fighters themselves, the Pakistanis rejected them, saying you cant go in, we are a sovereign state. The true reason behind this is that Islamabad is providing the militant groups with ammunition and training.

SPIEGEL: What is Pakistan seeking to achieve?

Saleh: It has always tried to make sure that Afghanistan remain on the level of a backward country, as well as to isolate us and hinder any kind of contact with the West. In the 1980s, when the mujahedeen were fighting against the Soviet occupiers, Pakistan had considerable influence over large parts of Afghan politics and Islamic Pakistan sought to establish its hegemony in the region. But now we are back, we are building up our country, we are unified and we are working to strengthen our sense of national pride. That makes our neighbors nervous.

SPIEGEL: Pakistan has feared its ability to hold itself together as a nation since its very founding. And even today, Afghanistan refuses to recognize the disputed border, the Durand Line. Wouldnt that step move Afghanistan closer to peace with Pakistan?

Saleh: We have never crossed that line.

SPIEGEL: What proof do you have that the government in Pakistan is behind the attacks in Afghanistan?

Saleh: In 2008 alone, according to our very conservative estimate, the Taliban have probably fired 1 million rounds from their Kalashnikovs. Where did they get their weapons and munitions? Can you go to Russia or China today and say, "Hey, I'm a member of the Taliban, please send hundreds of AK-47s and weapons to my village." Is that possible? No. It's the Pakistani army that is providing them.

SPIEGEL: Those are serious accusations.

Saleh: It is a fact. The Pakistani army is a very disciplined force, and I respect that. And there are no rogue elements in the army as is often claimed.

SPIEGEL: Who are the masterminds behind the scenes?

Saleh: The army leadership and the Pakistani establishment. We have piles and piles of evidence to support this. How much patience do you have?

SPIEGEL: Do you have details?

Saleh: For years we discretely passed intelligence information about training camps, addresses, telephone numbers and names of terrorists groups on to Pakistan. But they didnt act. There was no meaningful response. We have arrested many suicide bombers shortly before they could kill themselves and others. They frankly told us how they have been trained in Pakistsan and by whom.

SPIEGEL: Can you cite some examples?

Saleh: In Khost we arrested a man just a few minutes before he was able complete his mission. He was trained by a commander named Nazir in Wana in the tribal areas. Just before, the Pakistani government had signed peace deal with the same commander and only short time later he sent a truckload of suicide bombers to kill international forces. The Pakistanis have always claimed they couldn't find Commander Nazir. But how did he sign the peace deal then? Did they e-mail him?

SPIEGEL: But thats not proof that Islamabad is commanding the insurgency. Is it possible that Pakistan perhaps long ago lost control over the border areas?

Saleh: Nobody lost control. Pakistan is staging controlled chaos in order to undermine Afghanistan's development. The Pakistani army is very strong and when the government has achieved its aim, it will immediately take control again of the tribal areas.

SPIEGEL: In northern Afghanistan German soldiers are getting attacked increasingly often. Last week a suicide bomber blew himself up in an attack that took place between Kunduz and Pul-i-Khumri. How are these attacks that are taking place far from the border to Pakistan organized?

Saleh: Terrorist elements are ordering Afghans to attack our army units and ISAF convoys or to burn schools. The perpetrators make videos to prove what they have done and once they provide this proof, they are rewarded with money from Pakistan. In the Kunduz area, the plotters of these acts are the Taliban commanders Mullah Rustam and Mullah Salam. Both are Afghans, but they live with their families in Pakistan. If the two would be permanently in Afghanistan, we would have caught or killed them or brought them to justice. Heres another example: Why is the Taliban commander of Ghormach ...

SPIEGEL: ... a hard-fought district on the edge of the area under German command in the north ...

Saleh: ... whose name is Abdul Rahman Haqqani, currently being given medical treatment at a hospital in Peshawar after he was heavily wounded in recent fighting? Why? It's because Pakistan is his base.

SPIEGEL: Despite the many battles taking place in the country, the election campaign is starting to heat up in Afghanistan. In 2009, the next president will be elected. Which candidate has the greatest prospects, and will he be able to deliver greater security?

Saleh: It's too early to say. I only know that this government with Hamid Karzai has succeeded in achieving the country's reunification. But now we are intermixing modern institutions with traditional structures and we face a number of problems moving forward. But a consolidation is possible, even if the West sometimes doubts that.

SPIEGEL: And you, as the head of the intelligence service are still optimistic despite all these worries?

Saleh: Despite all the counter-attacks, we are experiencing the ressurrection of Afghanistan, and that is something magnificent.