The bloodshed continues in Syria, despite international appeals and stronger sanctions from the West. United Nations envoy Kofi Annan also failed to persuade Syrian President Bashar Assad to end his brutal campaign against his own people. The UN estimates that some 8,000 people have already been killed in the conflict.

As the diplomatic gridlock continues, calls for decisive steps by the West are growing louder. Early on Tuesday morning, the Syrian opposition called for military intervention by the Arab states and the international community. However, the United States, France and others have refused, not least because Russia and China vehemently oppose an intervention in the country.

But they aren't the only nations with misgivings about military intervention. SPIEGEL ONLINE spoke with Tunisian Prime Minister Hamadi Jebali about staying out of Syria, the Arab Revolution and its possible failure, his country's progress and whether Syrian dictator Assad could be exiled to Tunisia.

SPIEGEL ONLINE: Mr. Prime Minister, about a year ago the Arab Spring began here in Tunisia. Following the celebrations after the fall of several dictators, the situation now looks grim. Libya threatens to drift apart, the democratic process has stalled in Egypt, and in Syria, Bashar Assad's regime still clings to power. Do you think this historic change will fail?

Jebali: You're painting a picture of the situation which is too dark. The upheaval in the Arab world was a historic moment and isn't yet over. We're in the middle of a difficult process. The most important thing, however, is that the revolution in North Africa isn't allowed to be turned back.

SPIEGEL ONLINE: Many people say that the revolutions just didn't go far enough. Instead of completely dissolving old power structures, only the top players in despotic systems were removed.

Jebali: That way of thinking assumes that revolutions must follow the same pattern -- more or less like the French or October Revolutions, with lots of bloodshed, endless rage and thousands of dead. I don't share this view. The world has developed past this and the dictators are different, as are the people who rise up against them.

SPIEGEL ONLINE: The Tunisian people have been protesting a lot lately; almost daily, groups protest unemployment and the poor economic situation. They are against your policies, not against a despot.

Jebali: I would be a fool if I denied the immense economic problems in our country. In addition to the political oppression and mismanagement, this was a main motivation for the revolution. We'll need many years to overcome the inequality between different regions and social strata. Until then, everyone has the right to hold us accountable for our failures.

SPIEGEL ONLINE: That sounds good in theory, but at some point you, too, will be driven out by the angry masses.

Jebali: Every government would have these problems. What's new is that every citizen can express their feelings on the street. At the political level, we have achieved a lot: free elections, pluralism and democracy. The point now is to use this political success to solve economic problems.

SPIEGEL ONLINE: A central factor in the Tunisian economy is tourism. Your main customers, vacationers from Europe, are still avoiding the country because it is not yet safe enough.

Jebali: This image of Tunisia is distorted. When you look at the Tunisian press, you get the feeling that we're living in the middle of a civil war. Of course I don't want to dispute that, every day, there are demonstrations, sit-ins and protests at the universities. But do you have the feeling that your life is in danger here?

SPIEGEL ONLINE: Our feeling is more that you are in danger. Your seat of government is guarded like a fortress, and every ministry is still surrounded by barbed wire. It's not particularly reassuring for tourists.

Jebali: There is a police presence, and it is still necessary. But even in the year of the revolution not a single incident involving tourists was registered. I assure every tourist from Germany that Tunisia is safer today that it was earlier.

SPIEGEL ONLINE: This week you are visiting Berlin to meet with the German government. What would you like to see from Berlin?

Jebali: Germany has already helped us a lot, and we are thankful for the support. Right at the beginning the government gave us a hand with debt relief. I will travel to Berlin to underscore how important the democratic process is for Tunisia, and that we need help.

SPIEGEL ONLINE: In Germany there is a sense, however, that an Islamization of society and intolerance is growing in Tunisia.

Jebali: I can understand that the Islamists' victory in the election must've been a shock for observers on the outside, but what happened afterwards? We in the Ennahda Party sought out the middle ground and built a broad coalition. I am certain that Tunisian society will find its way to tolerance through this balance. This will also have a positive effect on developments in the neighboring countries.

'We Will Not Accept A Regime That Kills Its Own People'

SPIEGEL ONLINE: There is a growing Salafist movement in Tunisia. In the past year extremists attacked a movie theater and just in the past week Salafists hoisted a Caliphate flag on Manouba University. Secular Tunisians have the impression that the government is not doing enough to prevent or condemn such acts.

Jebali: There are two ways of confronting extremists. The first way is the path that (Zine El Abidine) Ben Ali took as dictator. He threw his entire opposition in prison. That is not the answer. The right solution for us is more freedom, more democracy. The Salafists want us to throw them in jail or kill them so that they can become martyrs. They live on those kinds of doctrines and visions.

SPIEGEL ONLINE: Let's talk about foreign policy. Syria is considered the biggest concern at the moment. Recently a conference of the so called Friends of Syria took place in Tunis. Why has Tunisia put itself at the head of the coalition against the Assad regime?

Jebali: We cannot and will not accept a regime that systematically murders its own people. That's why we organized this conference in Tunisia, in a country that a little more than a year ago was also not free.

SPIEGEL ONLINE: But then the conference produced little more than statements.

Jebali: It was important to take a fundamental position again this dictatorial and murderous regime. Now we pose a new question: "How can this regime be stripped of power?"

'We Want to See Ben Ali in a Tunisian Prison'

SPIEGEL ONLINE: Do you support a military intervention?

Jebali: Effectively such an intervention already exists. Anyone who supplies the Assad regime with weapons is helping to kill the Syrian people. That is why we in Tunisia are trying to find a way for a counter intervention without spilling more blood.

SPIEGEL ONLINE: So that means strong words instead of actions against the Assad regime?

Jebali: Currently a foreign military intervention would be pure madness, and would only throw more oil on the fire and give Bashar al-Assad a pretext that he is desperately looking for to unleash his military even further. We must carefully examine how we can help the Syrian people without causing more damage and making the situation more complicated.

SPIEGEL ONLINE: But your neighbor Libya would never have been able to bring down the Gadhafi regime without NATO Intervention.

Jebali: But also in Libya NATO almost tragically miscalculated, success was not a given and was only achieved through a considerable amount of luck. It was the right decision, but it cannot be used as a template for Syria.

SPIEGEL ONLINE: Your president, Moncef Marzouki, brought into the play the possibility that Assad could be exiled in Tunisia.

Jebali: I understand the goal of this invitation. If Assad were to leave Syria, a lot of bloodshed could be prevented. I respect our head of state, but I don't want to see Bashar Assad here. If I were to come across him, I would bring him before a court and hand him over to the Syrian people.

SPIEGEL ONLINE: In recent months Saudi Arabia has become one of your most important partners. At the same time the royal family is sheltering ousted dictator Ben Ali as a guest and thereby protecting him from a draconion jail sentence in Tunisia.

Jebali: It won't be possible to solve the issue of Ben Ali quickly. Ben Ali could also have gone into exile in Germany. Would we have severed our ties with Germany in that case? Hardly. It's a similar case with Saudi Arabia. At the same time, we do want to see Ben Ali in a Tunisian jail one day.

SPIEGEL ONLINE: Do you really think Ben Ali will even spend a single day in a Tunisian jail?

Jebali: That is not a matter of faith, it depends entirely on him. We would treat him well, fairly and purely in line with the law -- all the things he denied us for years. But he doesn't have the courage to look the Tunisians in the eyes and face up to them. 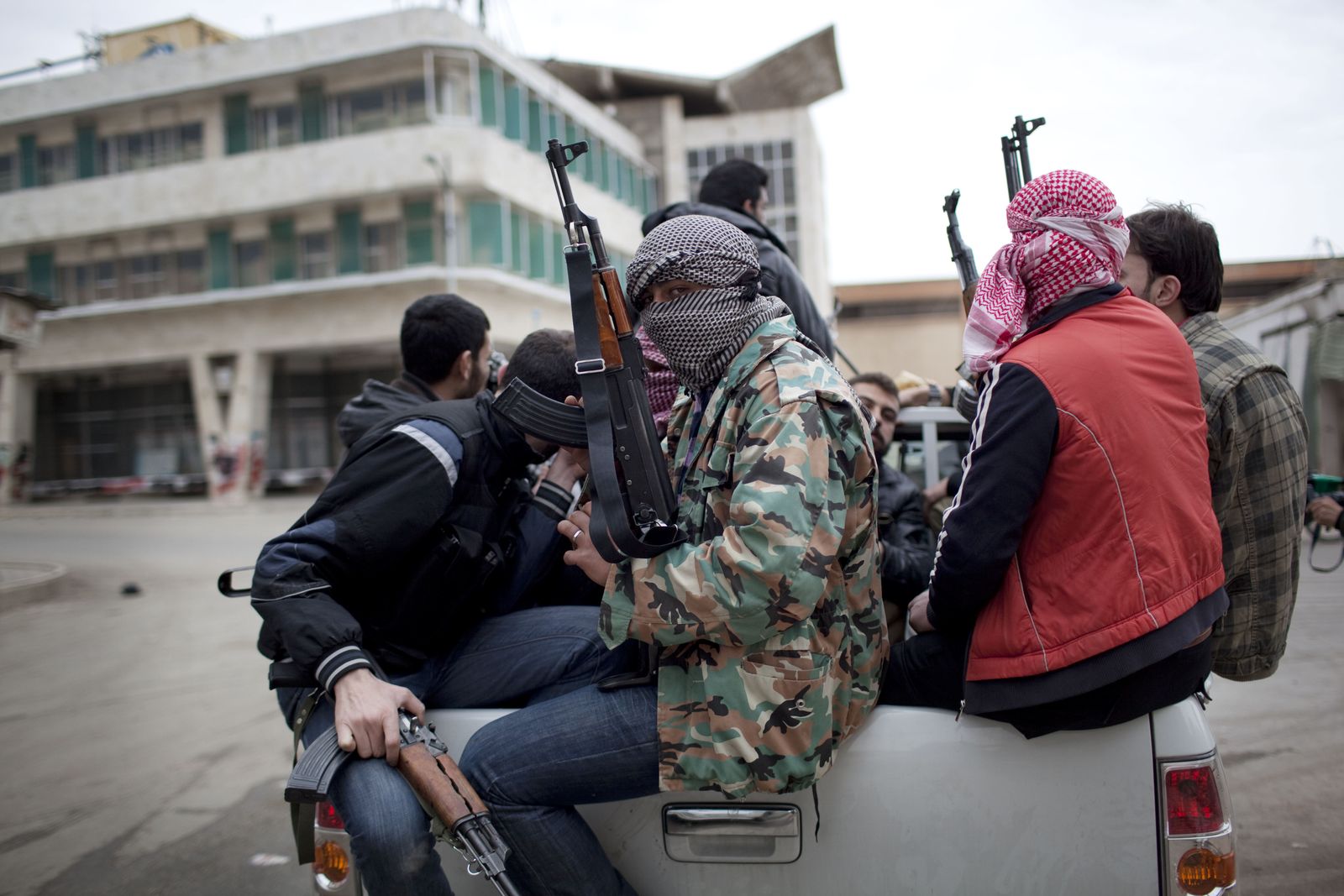 Rebels in northern Syria, where the situation continues to deteriorate this week: "We cannot and will not accept a regime that systematically murders its own people."