SPIEGEL: Mr. Kilicdaroglu, Turkey has now been led for over seven years by Prime Minister Recep Tayyip Erdogan. In the West, he has developed a reputation for his periodic fits of rage whereas in the Muslim world, he is seen as something of a superstar. Where is Erdogan taking Turkey?

Kilicdaroglu: Our prime minister's tantrums create problems for us. We are a modern country; our laws and ethical principles are Western. The government is in the process of gambling away this tradition. They are scaring away our partners. They are beginning to exert their power over the state, step by step.

SPIEGEL: What do you accuse Erdogan of doing? Are you worried that he wants to Islamicize the country?

Kilicdaroglu: I can't help but come to that conclusion. Those who do not adhere to the worldview of Erdogan's party, the AKP, are subject to great pressure.

SPIEGEL: Still, isn't the AKP in general pursuing pragmatic policies? Since Erdogan took office in 2003, the economy has grown by 40 percent and the country's influence in the world has increased.

Kilicdaroglu: It was not Erdogan who reformed the economy. Rather, it was the government of his predecessor Bülent Ecevit. The table was set by the time Erdogan came to power. Furthermore, even though the government has generated $30 billion (€24 billion) in revenues through privatizations, our national debt is higher now than at any time since the founding of the republic.

SPIEGEL: Internationally, though, Turkey can no longer be ignored. The country has become a respected regional power, a global player.

Kilicdaroglu: Of course Turkey is not a small country. Because of its geographic position, its history and its economic potential, Turkey has to be part of the global discussion. But that is not because of Erdogan.

SPIEGEL: It still seems clear that Turkey was never in as much demand as it is today. Ankara has become an important stop on the itineraries of heads of state and government from around the world.

Kilicdaroglu: I actually think that we currently have a prime minister who is strongly polarizing -- overseas as well as at home. Do you not agree that a less aggressive political style would suit our country better?

SPIEGEL: What would you do differently?

Kilicdaroglu: We are opposed to the brand of unregulated capitalism that Erdogan has imposed. We want a social market economy. Who is actually profiting from economic growth in Turkey? The differences in incomes here are enormous. At the same time, no new jobs are being created. I studied economics, but this was a new phenomenon for me: The economy is growing but so is unemployment.

SPIEGEL: Criticism of capitalism instead of criticism of Islam? That's a new message. Recently, your party turned heads by railing against Europe and by accusing Erdogan of trying to establish a theocracy.

Kilicdaroglu: He won't be successful; the foundations of our country have been in place since 1923. Nevertheless, we must be watchful. The social policies followed by the AKP, for example, are based on Islamic principles. Instead of establishing a state welfare program, alms are being distributed, just as the Koran calls for.

SPIEGEL: Why is your party opposed to reforming the Turkish constitution as the AKP strives to do? The current constitution comes from the time of the last military putsch. It was written by generals, not by lawmakers.

Kilicdaroglu: The government would like to see 14 of 17 justices on the constitutional court be named directly by the president, who at the moment is a member of the AKP. Do you consider that to be in accordance with the rule of law? All European Union reports on Turkey's progress criticize the fact that Turkey's judiciary is not independent. The government's draft proposal would essentially eliminate the balance of powers.

SPIEGEL: The AKP also seeks to reduce the power of the army.

Kilicdaroglu: One wonders how much influence the army is supposed to retain. The AKP is fighting an invisible enemy in order to win votes. We too are against the military exerting too great a political influence. Our society is preparing itself for European Union membership -- we don't want to experience any more military takeovers. But neither do we want to see a civilian putsch.

SPIEGEL: In other words, the military is no longer to play the watchdog role it was assigned by the founder of modern Turkey, Mustafa Kemal Atatürk?

Kilicdaroglu: The military plays a watchdog role everywhere in the world. But it must do its job within the legal framework and cannot act illegally. My party has never supported illegal actions. For example, we criticized the Turkish general staff when it published an online memorandum in an attempt to hinder the election of Abdullah Gül to the presidency.

SPIEGEL: Is it not damaging to your authority that you rose to your current position as party leader thanks to a sex video? Your predecessor Deniz Baykal was filmed while having an affair with a party ally and ultimately resigned as a result.

Kilicdaroglu: First of all, I wish that we didn't have to go through that. But I also would have liked to have seen the government make a sincere attempt to find those responsible for producing the video. Publicizing the private lives of others without their knowledge is a punishable offense.

SPIEGEL: Still, the incident doesn't seem to have harmed your party. Indeed, you have been called the "Turkish Gandhi" by the domestic media. It sounds like people have high expectations of you.

Kilicdaroglu: I know. The Turkish people have a great desire for change.

SPIEGEL: The newspaper Hürriyet, for its part, has described you as being a product of the student movement. Do you agree?

Kilicdaroglu: I don't have a problem with that description. I am from the 1968 generation and I'm proud of it.

SPIEGEL: The Socialist International, a worldwide organization of center-left and leftist political parties, has threatened to throw your CHP party out of the organization. Germany's center-left Social Democrats have also shown a recent preference for talking with the AKP because many consider some of your fellow party members to be nationalists.

Kilicdaroglu: In the coming weeks, I will be travelling to Brussels and to Berlin where I will meet with (leading Social Democrats). I believe that I can communicate to the Europeans a strong social democratic message from Turkey.

SPIEGEL: And you will be telling the SPD in Germany that you are social democrats and not nationalists?

Kilicdaroglu: Yes, but I will also explain that in Turkey we understand nationalism differently than it is understood in Germany. Our form of nationalism does not depend on ethnicity but rather on the concept of citizenship -- on a unified commitment to our country. Our country is the successor to the Ottoman Empire, which had many different ethnicities. What else could bring us together as a country?

SPIEGEL: Many Kurds in Turkey would dispute that. You yourself are a Kurd and an Alevi. How do you see it?

Kilicdaroglu: I don't want to exclude anybody. Everyone should be accepted as a citizen of Turkey regardless of his or her background. I think it is wrong to practice politics on the basis of ethnic or religious identity. Such a course has resulted in much bloodshed in our history.

SPIEGEL: The Turkish government has recently put forth several proposals in an effort to solve the Kurdish problem. They founded a Kurdish-language television station, they announced that more Kurdish courses will be made available and that Kurdish villages will get their old names back. Are those not reasonable steps?

Kilicdaroglu: I don't think that the Kurdish question can be solved solely through ethnic identity. The problem has social, economic, political and psychological dimensions. We would like to see, for example, direct investments in the Kurdish southwest of Turkey to reduce unemployment. We would also like to lower the 10 percent election hurdle as a way of assisting independent Kurdish candidates. We too are in favor of allowing everybody to speak their native language. It was the Ecevit administration that passed a law on the issue, not Erdogan.

SPIEGEL: Will you one day sit at the same table with the banned Kurdistan Workers' Party (PKK)?

Kilicdaroglu: No, I'm sorry. They are terrorists.

SPIEGEL: Even the British government sat down at the table with the IRA in order to solve the Northern Ireland problem.

Kilicdaroglu: The situation in Northern Ireland cannot be compared with that in Turkey. The PKK is not interested in constructive solutions. We know that, and the PKK knows it too. 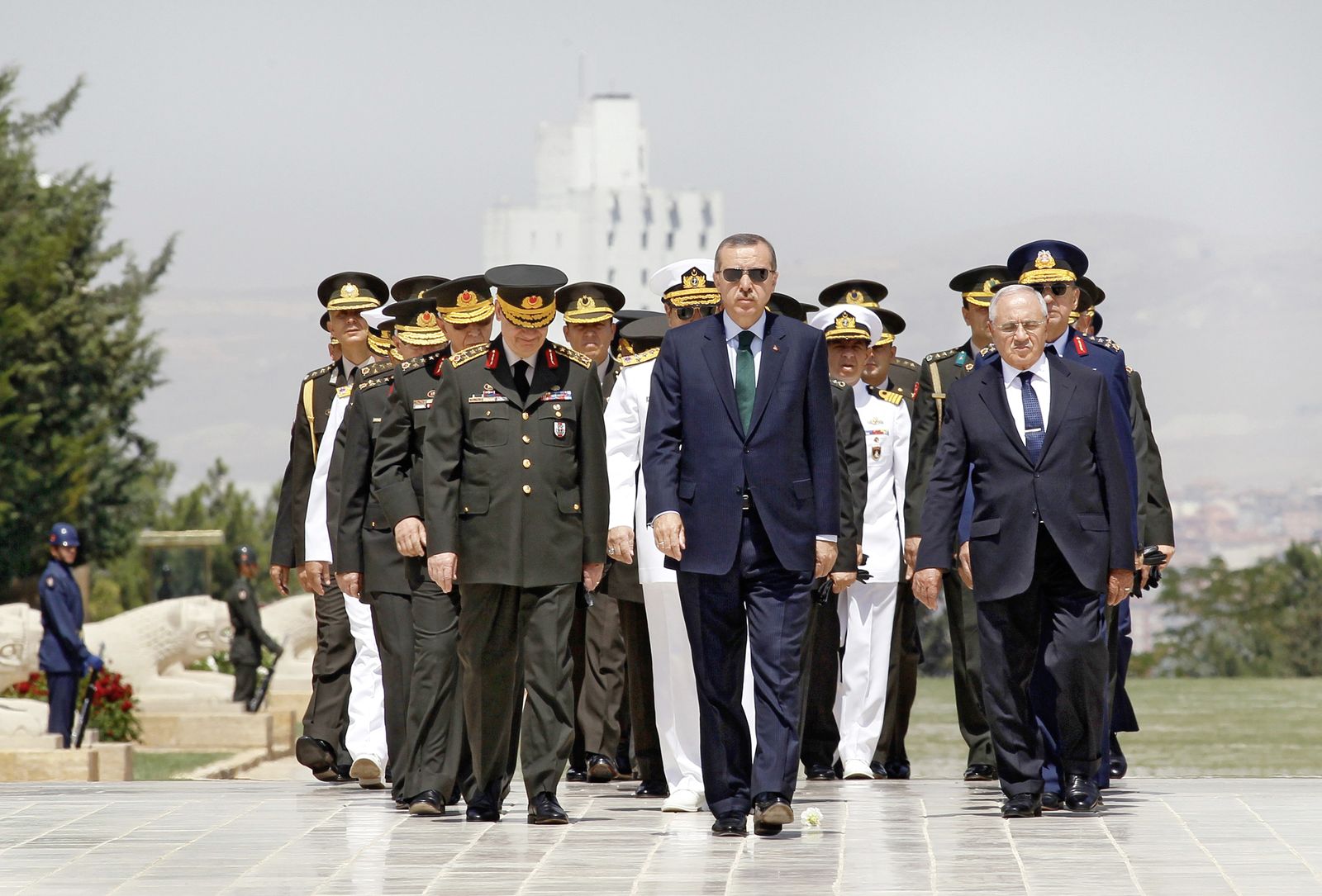