SPIEGEL: Mr. President, as a young politician you castigated autocratic African leaders who ruled for their entire lives. When you came to power, you changed the constitution so you could stay in office longer. It has been 30 years now. When will you leave?

Museveni: My critics always forget to mention that I was democratically elected, the others were not. Everyone in Uganda can challenge me, everyone can vote, the elections are free. Not many countries have achieved what we did. One third of the seats in parliament are reserved for women, five seats for youth, five for workers, five for the disabled and 10 for the army. How many democracies with such a record do you know?

SPIEGEL: So far, the political party system has yet to succeed in Uganda. Your only serious challenger, Kizza Besigye, has been arrested repeatedly. International observers certified the recent election as unfair, and on one day during the election campaign, you were on television for 12 hours while your opponent was only on for four minutes. Is this democracy?

Museveni: Our laws and institutions are excellent, but the population is not yet ready. They must develop their views and need to be provided with the right information. We now also have private broadcasters and many are very critical of me, hostile even, yet they operate freely.

SPIEGEL: Aren't you afraid of an African rebellion similar to the Arab Spring? Uganda's rapidly growing population is young, globally connected and its biggest problem is the lack of jobs and the feeling of not being able to breach the old leadership structures.

Museveni: Our population is growing rapidly because of our good health policy. When I came into office, there were 14 million Ugandans, today there are 38 million, despite the catastrophe of AIDS, which we have also tackled. The Ugandans know and appreciate this, especially the elderly. This makes it very unlikely that Uganda will face a chaotic scenario similar to that in Syria or other places. Incidentally, doctors, scientists, engineers and nurses are highly sought after and find jobs immediately.

SPIEGEL: Last year, 1.3 million refugees came to Germany, mainly from Syria, Iraq and Afghanistan, but also from Africa. Many believe this is only the beginning of an exodus to Europe. What do you suggest to stop this wave of migrants?

Museveni: Mistakes were made. But I would prefer to talk about these issues in detail with your political leaders.

SPIEGEL: Is this in reference to the wars in the Middle East or the uprisings in Libya and Tunisia?

Museveni: When the problems in Libya started, the African Union set up a committee to address the situation. We urgently advised the Europeans not to intervene. You have done so anyway. Now we are seeing absolute chaos there.

SPIEGEL: What should the Europeans do to stop the refugee crisis?

Museveni: Refugee problems can only be solved in the region (of origin) -- maybe with a little help from the UN. Governments must provide something for their countries. They need to deliver. Thirty years ago, Uganda was among the four countries that had the largest number of refugees abroad, along with Ethiopia, Afghanistan and Sudan. We have dealt with it. Today people stay because they find a better life here.

SPIEGEL: These days, it is Islamist fanatics that many people are fleeing from and not poverty. Your country already sent thousands of troops to Somalia to fight against the extremist Al-Shabab militia. Is Africa the battlefield of the future for the jihadists?

Museveni: We are helping our Somali brothers get rid of these narrow-minded attackers. The Somali people do not support the extremists, they are on the side of our soldiers.

SPIEGEL: How close to Kampala are the Islamist fighters?

Museveni: In 2010, they managed to plant a bomb at a club as people watched the World Cup finals. Since then we have taken tough measures. There has been no further attack and the culprits have just been brought to justice.

SPIEGEL: Some are already talking about a new "axis of Terror" that reaches from Mauritania in the west via Mali, Nigeria, Niger and Sudan to Somalia in the far east of the continent. How realistic is this threat?

Museveni: The chaotic situation in Libya is definitely creating a threat. Libya now connects the jihadists in Africa with those in the Middle East and in Afghanistan. This could have been avoided.

SPIEGEL: The European Union just cut back its funding of African Union troops in Somalia by 20 percent. Does Europe understand the emerging risks in Africa and does it take them seriously enough?

Museveni: We certainly would be happy for more help, but not at the price of condescension and arrogance. If the Europeans believe they can afford to be less committed in Somalia, please -- we can deal with it ourselves. The Islamists had control over territory that was about half the size of the Federal Republic of Germany. For years, we have been putting the lives of our troops on the line, we have taken huge losses and the Europeans cut the budget? If money is more important than the lives of our children, what else is this than the usual arrogance and superficiality? And where is all this terror coming from? It is a result of mistakes the West committed in Pakistan and Afghanistan in the 1980s, when they armed the Islamic rebels against the Soviet troops. Extremism in Somalia is causally associated with these events.

SPIEGEL: Today the Gulf countries and the United States again arm the so-called good rebels against the oppressive regime in Damascus and its supporters in Tehran and Moscow. Are we repeating the mistakes of the past?

Museveni: I cannot speak to this publicly, but with Mrs. Merkel and Mr. Obama I would love to discuss this.

SPIEGEL: The International Criminal Court in The Hague aims to end impunity for the criminals in these wars. In 2008 you supported the arrest warrant against Sudanese President Omar al-Bashir for crimes against humanity. A few days ago, he was in Kampala at your inauguration ceremony, where you warmly received him. You didn't show any interest in arresting him. How come the change of heart?

Museveni: I was one of the first to sign the Rome Statute, which established the International Criminal Court (ICC). I was against impunity when it comes to human rights violations. But many of us African leaders now want to leave the Rome Statute as soon as possible because of this Western arrogance.

SPIEGEL: African opposition to the ICC has been building up since Kenyan President Uhuru Kenyatta was to have been indicted. You seem to feel closer to Kenyatta than to your Sudanese counterpart. But a crime is a crime and the law is the law. Doesn't this apply to both friends and foes?

Museveni: When we asked the United Nations to suspend the trial for a year, which the statutes allow, so that Kenyan elections could be carried out, it was simply rejected. The preparation for the indictment proceeded. Now I've changed my mind, even against Omar al-Bashir. Whether he has to be charged or not, the Sudanese shall decide or the Africans. The ICC has lost all credibility. This is our continent, not yours. Who are you to ignore the voice of the Africans?

SPIEGEL: President Uhuru Kenyatta is accused of purposely inflaming tribal conflicts during the 2008 election campaign, which led to more than 1,100 deaths. Should this go unpunished?

Museveni: The problems of tribal conflicts in Kenya are much older, caused by the former colonial power. A former American ambassador there once wrote about how the CIA has contributed to the divisions between Kenyans. You reap what you sow.

SPIEGEL: But if the 34 African countries withdraw from the Rome Statute, the International Criminal Court will have failed.

Museveni: So what? Judge yourselves, not us.

SPIEGEL: In other cases, international justice was helpful to you, as in the prosecution of notorious Liberian President Charles Taylor or the international arrest warrant against Joseph Kony, the Christian fanatic militia leader of the Lord's Resistance Army, which for years terrorized Uganda.

Museveni: Kony is hiding somewhere in the Central African Republic. He is no longer a threat. We have already punished him. We provide our own safety. We do not depend on you.

SPIEGEL: Militarily, Uganda operates closely with the US and France. How does this cooperation fit in with security issues and your desire to be autonomous?

Museveni: Of course there are collaborations. But in official meetings with Western diplomats from the US and the European Union, the major issues of our relationships are simply not discussed. The topics are on climate change or any other issues they want us to agree with them on. But they never discuss how we could develop an equal relationship. They should stop using pompous orchestrated summits and begin a serious dialogue with small meetings.

SPIEGEL: Three decades ago, Uganda was the country where the most people died of AIDS. Your education and research program had a major impact in reducing the disease's spread, but now the number of new infections is rising again. Many say one reason is the rise of evangelical Christian movements, who praise faith as the most important measure in the fight against AIDS, rather than enlightenment and recommendations to use condoms.

Museveni: Today, hundreds of thousands of AIDS patients are under medical treatment, which is a great advancement. But it makes some people reckless.

SPIEGEL: Gays claim not to be harassed by the state, but by mob forces. Homosexuality is prohibited by law and this creates a criminalizing climate that promotes attacks.

Museveni: This is just another example of European arrogance. For us, heterosexuality is normal. Homosexuality is a deviation. Then Western diplomats come up to me and say: As long as you do not take our way of thinking, you are the evil. My answer is: Go to hell. Leave us with our option.

SPIEGEL: Why you don't just lift the law?

Museveni: We do not accept the Western way of thinking that there are two ways of life. At the same time, the police (here) are not chasing gays. In Africa, sexuality is something very private, even for heterosexuals. Heterosexuals are not parading! But gays want to behave like exhibitionists. If I kissed my wife in public, I'd lose the next election.

SPIEGEL: If you want to run for election again, the constitution will need to be changed to extend the age limit for presidents to 75 years. Will that happen?

Museveni: The Ugandans shall decide. 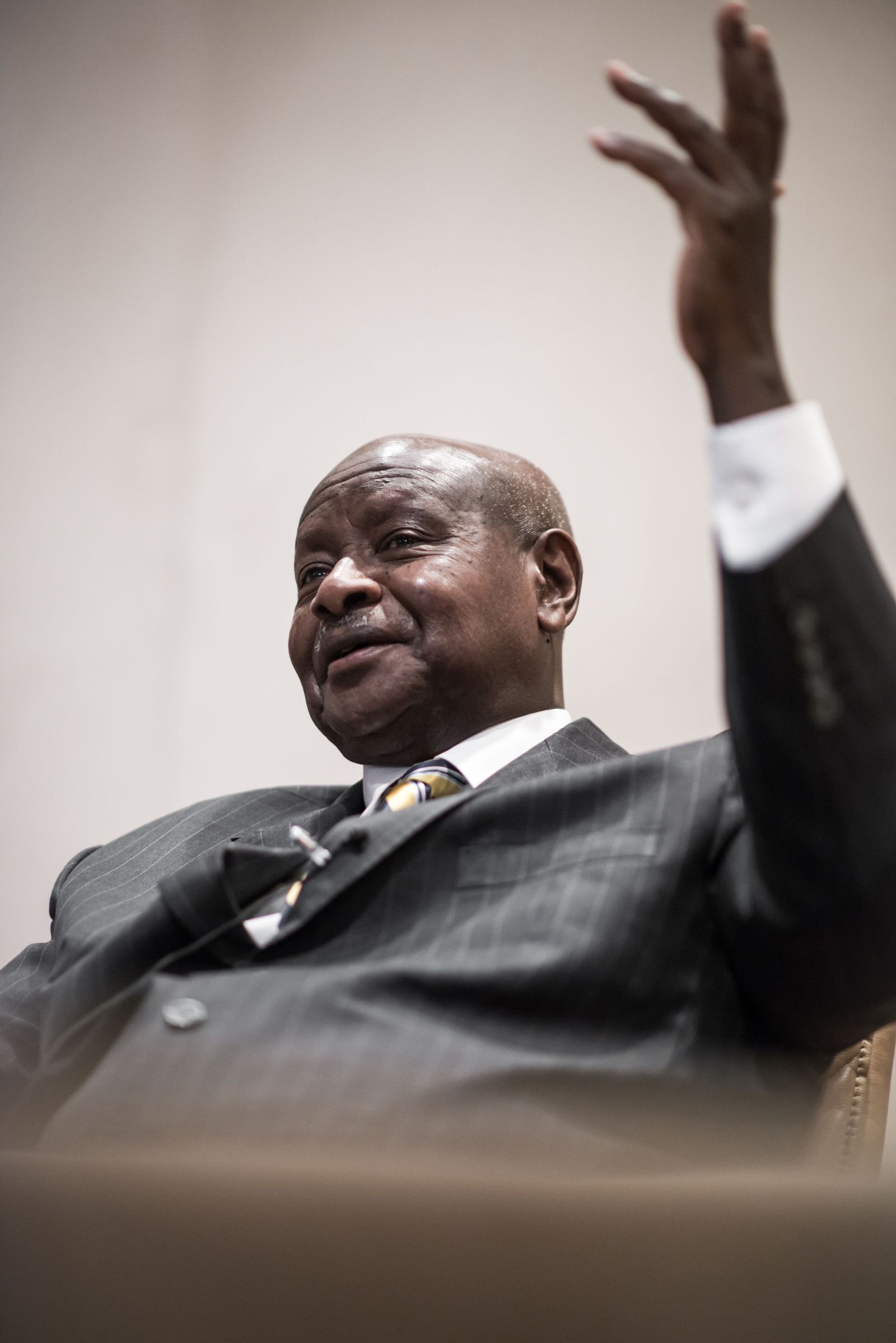