SPIEGEL: You were part of President Johnson's Vietnam team, you even wrote some parts of the Pentagon Papers, which uncovered the real history of the Vietnam War. What have you learnt from that experience and can you draw it in your current job?

Richard Holbrooke: I was a very young man when I worked on Vietnam between 1963 and 1969. I worked in the field and in the Johnson White House, as well as being a member of the negotiating team in Paris. I watched people confront great decisions, and from that close observation, I think I learned how to approach such difficult moments and try to analyze them.

SPIEGEL: With that experience in the back of your mind, do you think it really pays for the United States to fight wars in far-off and unstable lands, especially those that have acquired a reputation for being a "graveyard of empires?"

Holbrooke: Of course it's difficult to fight in Afghanistan. But it's necessary because of 9/11. That is the core difference between Afghanistan and Vietnam. We're not in Afghanistan to build a perfect democracy. We know these were not perfect elections. But we must go ahead, we must help the Afghans strengthen their own capabilities. We're not there to take over the country, we're there to help the Afghans build their own capacity so that their security forces can replace the international forces over an acceptable period of time.

SPIEGEL: Has the thought crossed your mind, even for a brief moment, that American troops might leave Afghanistan the way the Soviets left Afghanistan, namely defeated?

Holbrooke: No. I have talked to the former Russian ambassador in Kabul, who has the wonderful name of Zamir Kabulov. He is now my counterpart in Moscow. As a young Soviet diplomat he participated in the entire drama, and he saw it all.

SPIEGEL: And what was the most important thing you learned from speaking to him?

Holbrooke: Well, don't do what the Soviets did, which was to strafe and kill an incredible number of people with their strikes. The American forces and our allies in Afghanistan do not do that. General Stanley McChrystal has issued very careful guidelines on the use of force. And the civilian casualties issue is not remotely the same as it was then. The Soviets were hated. NATO is not.

SPIEGEL: How serious is the situation? McChrystal insists on 40,000 additional troops. He has even said that anything else would amount to a call for the "helicopter on the roof of the embassy" -- an analogy to Vietnam.

Holbrooke: I'm not going to comment on the internal discussions, but General McChrystal's public assessment of the situation is similar to my own assessment. 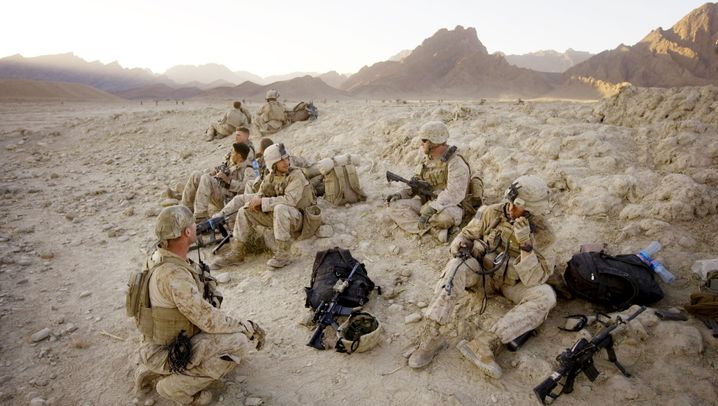 SPIEGEL: For weeks the president's security team has very openly thought and talked about the new strategy for Afghanistan. Why has it taken so long to reach a decision?

Holbrooke: I've been privileged to participate in most of these discussions. This is the most careful, methodical approach that I have ever seen.

SPIEGEL: Are there any right ways to move forward in this war? Many experts are already putting it into the category of "unwinnable" wars.

Holbrooke: We have to define what our goals are. We're not seeking to destroy every person who supports the Taliban, that's not a credible goal. Our goal is to destroy al-Qaida, a terrorist organization with global reach which attacked the United States, which conducted attacks in London, Madrid and Bali, and Mumbai and Islamabad, which supports attacks in Afghanistan through other groups.

SPIEGEL: So you want to distinguish between extremist Taliban and those who are merely hangers-on?

Holbrooke: Secretary of State Clinton laid out in July very clearly that the majority of the Taliban do not support Mullah Omar's extreme views and that there is room for them to rejoin the social and political fabric of Afghanistan if they renounce al-Qaida and reintegrate peacefully into Afghanistan. And that is a major part of our policies.

SPIEGEL: But there is still the question of the additional troops. National Security Adviser General James L. Jones has told SPIEGEL that even 200,000 troops would get "swallowed up" in that country. He drew the conclusion that there cannot be an exclusively military solution to the problem.

Holbrooke: I agree with General Jones. I just said the same thing. The whole goal here is to create enough time and space for the Afghans to take over their own security responsibility. That is the core of the strategy.

SPIEGEL: What is enough time and space?

Holbrooke: I'm not going to give you a specific timetable.

SPIEGEL: Is this the beginning of America's retreat?

Holbrooke: I don't understand that question. This administration has committed 21,000 additional troops and they are considering sending more. The president has said publicly that we are not going to abandon Afghanistan. Our allies, including Germany, Great Britain and France and others are increasing their commitments. Japan just announced a $5 billion aid program. So why would people think that we are retreating when, in fact, we are increasing our efforts to help the Afghans and resist the al-Qaida and keep the Taliban off-balance so that the government can now do its job?

SPIEGEL: Nonetheless, you hear a lot less about nation-building these days and more and more about exit strategies.

Holbrooke: Our concept includes that the United States and its allies will help the Afghans on the civilian side to build up their capacity. It's not nation-building, there is a nation in Afghanistan and it's been there for a long time.

Holbrooke: Can I guarantee it? I can't, but I hope they will be.

'Nobody Can Call the Training of the Police a Success'

SPIEGEL: When the US has talked about handing over the responsibility for a war to local forces in the past, it represented the final stage before a complete collapse.

Holbrooke: You keep going back to the wrong war and I would rather just focus on Afghanistan.

SPIEGEL: Giving responsibility to local forces sounds nice but can be difficult. Take police training. First, the Germans trained too few police officers well and then the Americans trained a lot of police officers, too quickly and too poorly. Is that really a success?

Holbrooke: Nobody can call the training of the police a success in the last five or six years. We are changing the entire approach to police training. American military units especially trained to train the police and the army are coming in now to work on that and we recognize that that is probably the weakest link in the chain.

SPIEGEL: You talked about the allies in this war. Some countries, among them the Germans, announced sending more troops. But others are withdrawing, for example Canada and the Netherlands. What will Obama demand from his allies in the future?

Holbrooke: The European contributions have been extremely important and I hope they will continue. I just talked about it with London, Paris and Berlin. Those were good talks, but each country has to make its own decisions.

SPIEGEL: In the past German forces in Afghanistan were sometimes ridiculed because of their strict rules of engagement.

Holbrooke: Germany has had over 30 soldiers killed, I don't think that's anything to laugh about. I used to serve as ambassador in Germany. I was there when the Karlsruhe decision of July 1994 opened the door for deploying Germans outside of Germany for the first time since the end of World War II and I saw how difficult it was. Then there was Kosovo and now you have Germans risking their lives in Afghanistan. Moreover, the Germans are giving a lot of economic aid. We should respect that.

Holbrooke:  but there is a war going on in Afghanistan.

SPIEGEL: Until now German politicians were very successful in avoiding that word.

Holbrooke: What does SPIEGEL say?

SPIEGEL: SPIEGEL says it is a war.

SPIEGEL: Is the Afghan President Hamid Karzai still America's partner in this war?

Holbrooke: Karzai is the re-elected president of Afghanistan. We respect that and we look forward to working with him very closely. Yes, he is our partner.

SPIEGEL: You are on your way to Kabul -- are you going to tell him who he can appoint as governors and ministers in his government?

Holbrooke: We are going to urge him to pick competent people who are up to the job, who are strong leaders. Afghanistan suffers from a tremendous lack of strong leadership talent after 30 years of continuous war. But there are some very good people in the country and we're going to encourage him to appoint strong province governors and good ministers.

SPIEGEL: Mr. Holbrooke, thank you very much for the interview.