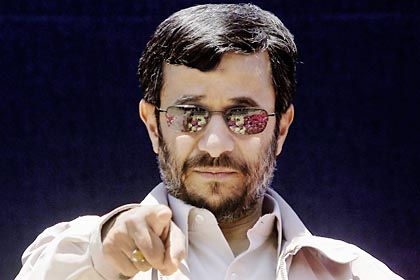 The president is doing well, in fact, he is doing very well indeed. Mohammed Ali Ramin leans back, sips his tea, pours in a little milk, and takes another little sip. Then he sets down his glass and folds his hands. The man with reddish-blond hair and a pious full beard enjoys his position as close advisor to Mahmoud Ahmadinejad.

Ramin, 54, who once studied engineering in the German town of Clausthal-Zellerfeld, has been a member of the presidents inner circle of friends and companions for years. The university lecturer is said to be an influential figure even among Irans religious zealots, and he is proud to have stood beside the late revolutionary leader Ayatollah Ruhollah Khomeini during his exile in Paris. Anyone who knows my thoughts, he says knowingly, also knows what motivates the president.

And what motivates Ahmadinejad?

Primarily his boundless love for the people, especially the disenfranchised and his commitment to the Islamic principles of truth and justice. And, of course, the welfare of the Iranian nation. Ramin: Ahmadinejad is the standard-bearer of our people and the entire Islamic world.

Ramins confidence in the government is as unshakable as his faith in the Prophet Mohammed -- and his views are shared by millions of Iranians. After nearly three years in office, the extremist Ahmadinejad still enjoys widespread support among the population -- despite tightened sanctions in the dispute over the mullahs nuclear program and international outrage over the presidents Holocaust denials. Following last weeks parliamentary elections, Ahmadinejads Principlists again emerged as the strongest faction in the Iranian parliament, the Majlis, in spite of fierce attacks from the ranks of the conservative camp. Before the elections, the mullah regime had effectively neutralized the reformist wing by preventing many of their politicians from running.

Nevertheless, a broad front is forming against the president. The leader of the critical Principlists, former nuclear negotiator Ali Larijani, is seeking support among opposition members of parliament to become the new parliamentary speaker. This important political position would boost his chances, should he challenge Ahmadinejad in the upcoming presidential elections during the summer of 2009.

Other members of the moderate conservative camp are also reportedly considering running for office, such as the mayor of Tehran, Mohammad-Bagher Ghalibaf, and the former commander of the Revolutionary Guards, Mohsen Rezai. Former Majlis speaker Mehdi Karroubi and ex-president Mohammad Khatami are the main contenders among the reformers vying for the best position against Ahmadinejad.

Both the reformers and the pragmatic conservatives agree that the government is ruining the country with its dilettantism, as former president Ali Akbar Hashemi Rafsanjani puts it. He himself doesnt intend to get involved in the presidential race, at least not officially. Rafsanjani -- probably the richest man in Iran -- is reportedly speculating over the successor to religious leader Ayatollah Ali Khamenei, who suffers from poor health.

In effect, Ahmadinejad has been steering the country deeper into crisis, especially economically. Experts such as former Khatami advisor Sajed Lailas estimate that inflation has risen to much more than 25 percent. To make matters worse, he says that half the countrys workforce is actually unemployed because state-owned enterprises and government agencies have many employees on the payrolls only as window dressing. Nevertheless, Ahmadinejad has added a few hundred thousand workers to Irans approximately four million government positions because he promised jobs for his constituents. Corruption also continues to drain the country. Lailas says that damage caused by pilfering and mismanagement amounts to over $20 billion (€13 billion) a year.

The sprawling city of Tehran reflects the deep rift that divides the country. While ever higher and more luxurious apartment buildings are built to accommodate the nouveaux riches in the affluent north, the southern part of the capital city continues to suffer from rampant urban decay, even under Ahmadinejad. The social gap, says Lailas, has become wider and wider.

To understand why the poor remain loyal to the president, you have to travel to Shush -- a district located halfway to the gigantic shrine of the revolutionary leader, a complex on the southern outskirts of Tehran. In Khomeinis last will and testament, he asked to be laid to rest near the Mostazafin -- the poorest of the poor.

Anyone who owns an old motorcycle in this area ranks among the more prosperous residents. Rahman Behnami, 60, is not one of them. The father of seven children repairs shoes for a living. Over the past 24 years, the glue has eaten into the tips of his fingers. He doesnt own a watch and he has no teeth, but has great faith in God. This also means that he lets his neighbor tell him who to vote for. We are too poor to take an interest in politics, says Mehrdad Shiri, 23, who runs two kebab joints with his father and wields a certain amount of influence in Shush.

He took care of us even when he was the mayor of Tehran, says Shiri, while he attends to his few customers. He talks about how Ahmadinejad came here personally -- to these filthy narrow streets, where a man like Larijani would never set foot. Thats why Shiri voted for him. And hell do it again. The president has a knack of appearing to be everywhere at once -- and thats one of the secrets of his success. As the former mayor, he knows that elections are not won in the intellectual north of Tehran but among the grassroots, particularly in rural areas. He doesnt seem to care that his spectacular appearances cost a fortune and actually hinder the work of the government, as the opposition contends. Ahmadinejad has already visited all 30 provinces with his cabinet.

Ahmadinejad began to present himself as a man of the people back when he was the mayor. Shortly after his election in March 2003, he opened a kind of public consultation office where people could air their grievances just a stones throw from his residence on 72nd Square, in a rather proper neighborhood in eastern Tehran. Today, less than 100 meters from the plain brick house of the Ahmadinejads, petitioners still submit letters to the current president.

Razai Said Hassan, 60, who has lived a few blocks away for quite some time, can name a handful of acquaintances who have been helped by the head of state: Widows received government grants worth 5 million tumans -- the equivalent of €3,500 -- and others were helped with loans. Hes really there for us, says Hassan with praise.

May God protect him, says Atife, 28, who has managed to make the jump from the poor south to the center of town. Back in the slums, she had to live in one room with her husband, her son and her mother-in-law. It was hell. Now her small family has two rooms in the better neighborhood of Bani Hashem.

In their humble flat, bare light bulbs hang from the ceiling. The sofa, the glass cabinet and virtually all of Atifes belongings are actually second-hand worn-out furnishings distributed by a private foundation. Out of gratitude, she now visits their Koran readings once a week. An acquaintance of Atifes owes her happiness directly to the president. A fund created by Ahmadinejad granted her a loan for her wedding.

No one can say how long the head of state can afford to be this generous. Many of the newly-elected members of parliament want to put an end to the populist good deeds and have already announced tough debates on the budget. But even harsh critics like former government advisor Lailas think that Ahmadinejad still has a good chance of being reelected.

According to his close aide Ramin, the president wants to stick to his approach of traveling and distributing to the needy.

The public coffers are full, very full, says the friend of the president -- and seeks a comparison with the Prophet: Didnt Mohammed distribute the state treasury to the poor before he lay down to sleep?