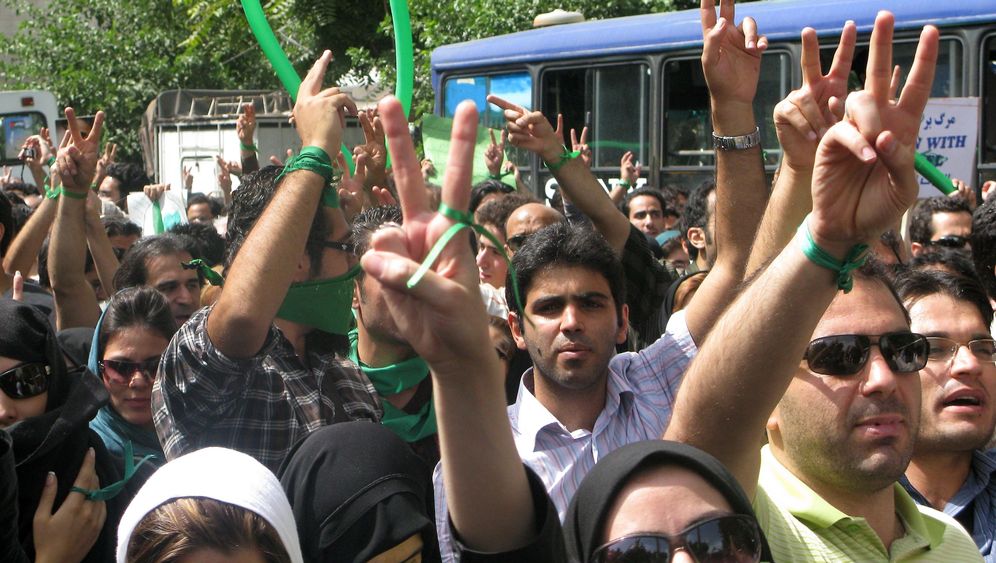 Ali Kantoori doesn't know what his tormentors look like. Instead, it is their voices that have been burned into his memory. He was blindfolded and stripped naked. "When we're finished with you," one of the voices said, "your hair will be as white as your teeth."

Kantoori, who was a student of physical education, was imprisoned in Tehran's notorious Evin Prison for five months, including 25 days in a completely darkened cell. During the interrogations, the torturers broke several of his ribs and whipped the soles of his feet with electric cables. Sometimes, the 29-year-old Iranian recalls, they forced him and other prisoners to crawl on the ground, lick up the dirt and make animal noises. His family was eventually able to secure his release from that particular hell by paying €120,000 ($152,000) in bail money.

Today Kantoori lives in Nigde, a city in the heart of Turkey. By fleeing Iran in early March, he escaped arrest under a new warrant for engaging in "propaganda against the Islamic Republic." Although his hair hasn't turned white, Kantoori now suffers from severe depression and asthma attacks.

Tania Ahmadi also fled to Turkey. The young doctor had sharply criticized the stoning of women in her blog and, in the summer of 2009, she joined the "green movement" protesting against the regime of Iranian President Mahmoud Ahmadinejad. Her activities made her a target for the country's security services. In January, they arrested the 28-year-old, who was born in Evin Prison and whose mother, a communist, was executed shortly after giving birth to Tania.

"They told me that I would have the same fate as my mother," says Ahmadi. "Then they almost beat me to death." When the torturers sent her home, she was bleeding internally and suffered from periods of deafness in both ears. Her trial was scheduled to begin soon afterwards. "I left the country as fast as I could," she says. She fled to central Anatolia in Turkey, and now she faces the prospect of being marooned there.

Supporters estimate that about 2,000 Iranian dissidents like Kantoori and Ahmadi are now stuck in Turkey. The heroes of the revolution have become helpless refugees who managed to save their own lives, but nothing else. For weeks, they protested against fraud during the presidential elections, giving the protest movement a color with their green banners and flags -- until the regime brutally crushed the resistance movement.

Those who survived and made it across the border to the north are now hoping to be accepted by a Western country. But Germany, in particular, appears to be dragging its feet. The Interior Ministry announced in early March that Germany would accept some of the dissidents, but last week, ministry officials became more specific in a report for the domestic affairs committee of the German parliament, the Bundestag.

The report stated that the announcement had applied to "journalists, photojournalists and other individuals who have made special contributions to human rights and democracy in Iran." The list also included people who had been imprisoned and subjected to the horrors of torture. To date, however, Germany has not allowed any of these people to enter the country. According to the announcement by the Interior Ministry, headed by Christian Democrat Thomas de Maizière, the country will not be ready to accept the refugees until June, almost one year after the Iranian government's brutal repression of the protest movement.

Firmly on Their Side

The deliberateness with which Berlin has approached the problem has opened it up to accusations of dragging its feet. On March 3, Foreign Minister Guido Westerwelle told the United Nations Human Rights Council in Geneva that Germany strongly supported the Green Revolution, including the journalists, the union members and all the citizens who were only claiming their constitutionally guaranteed rights. "They should all know that we are firmly on their side," Westerwelle said. Five days later the Interior Ministry announced that Germany, as a sign of solidarity, had agreed to accept Iranians in well-founded individual cases. The announcement made a general reference to Iranians abroad, but everyone knew what it meant: the dissidents who had fled to Turkey.

But now, nine weeks after this strong show of solidarity, German supporters of the refugees say that very little progress has been made. "I have a suspicion that Germany is waiting until other countries have accepted the refugees, both to save money and to avoid trouble with Iran," suspects Mehran Barati, an Iranian politician in exile, who now lives in Berlin. "It's just not possible that a German government that intends to accept refugees would need four months to do so."

Barati's timeline doesn't begin in March, but in January, when he sent the German foreign ministry a list of the names of 70 people, complete with their stories. It was a dossier on people who had been tortured, had then fled the country and have now been stranded in Turkey for months, living in constant fear of Iranian secret agents -- agents who can now travel freely, without visas, into Turkey. Just how dangerous their situation may be was illustrated this week when five "anti-revolutionary" prisoners in the Evin prison were executed.

Most of the refugees in Turkey have registered with UNHCR, the United Nations refugee agency, and therefore no longer have to fear deportation. But they are not wanted. Turkey's relations with the mullah-led government in Tehran are too strong, and the Turks are too interested in buying more natural gas from Iran. Many of the dissidents are now hoping for a future in the West. But those prospects seem slim, particularly when it comes to traveling to Germany.

At a meeting of state and federal interior ministry officials, there was talk of accepting 20 refugees. But that isn't enough, Barati says critically, noting that France is accepting 40 and Norway, a much smaller country, has agreed to take 140 of the Iranian refugees. But the federal Interior Ministry believes that Barati's criticism is unfair. "Any number seems too small when you consider the overall suffering. But it is hard to understand why precisely those who are helping are being criticized," says Ole Schröder, a state secretary at the Interior Ministry in Berlin. And what about the procedure? It's "the standard acceptance procedure," Schröder explains, and insists that no one is wasting time, and certainly not for political reasons.

His argument is supported by the fact that Germany has become more and more generous recently when it comes to Iranian refugees. In 2008, the Federal Office of Immigration and Refugees (BAMF) approved only 35 percent of Iranians' asylum applications. In 2009, that number had already gone up to 48 percent and, in the first quarter of 2010, 56 percent, and the numbers keep going up. It doesn't seem plausible that Berlin would now be stonewalling when it comes to the dissidents.

In fact, the government has chronological proof that it not willfully dragging its feet. Only three days after de Maizière's decision on March 2, his staff wrote a memo to all states instructing them to prepare for a refugee acceptance program.

On March 11, Interior Ministry officials met with their counterparts from the Foreign Ministry and the UNHCR to discuss responsibilities, on March 19, the Foreign Ministry sent the Interior Ministry a list of possible candidates, and on March 22, both ministries agreed on the names that would be approved. Then, the list was taken to the states, to ask how many they could take. On April 22, the interior minister instructed the BAMF to send representatives to Turkey to interview the applicants. Did they provide accurate information on their applications? How can they be integrated in Germany, and where is the best place to send them? The first of these interviews are set to begin next week. But then the officials will still need time to obtain visas, schedule travel dates and buy plane tickets.

It is, in fact, the standard procedure. But it also happens to be a very German way of going about things. The officials involved may have taken a two-week break around Easter, but they did nothing to suggest that they were ignoring or riding out the problem. "That sort of an accusation is utter nonsense," says Wolfgang Bosbach (CDU), the chairman of the domestic affairs committee in the Bundestag. Officials are merely being thorough -- and careful, so as not to provoke any diplomatic incidents. Germans are currently intent on handling Turkey with kid gloves.

While Malta was recently very grateful when Germany agreed to take 100 boat refugees off the island nation's hands, the Turks are determined not to create the impression that they are unable to cope with the refugee problem. "There will certainly not be a press conference when the first Iranians arrive," says a German government official.

One can see the Germans' efforts from two very different perspectives. The first is the perspective of the German officials, who are doing what they always do: playing by the book. And the second perspective is that of the refugees, who, according to Barati, ask themselves the same question every day: "When are we finally getting out of here?"

Mohammad A. and Zahra Z., at any rate, decided not to wait until the Germans were ready. They made their way to Germany on their own and are now staying at a refugee hostel in the state of Hesse. Mohammad proudly wears a green T-shirt, green as the movement for which he risked his life. The cost of his ticket to freedom was €22,000.

Traffickers took them to the Turkish border at night. From Izmir, they traveled to Athens and Milan, and finally ended up at a bus stop in downtown Frankfurt. By the end of their journey, they had been on the road for five months. Mohammad had to witness a 16-year-old refugee hiding next to him in a refrigerated truck freezing to death. But the fear of being arrested and sent back to Iran was even greater than the exertions of the trip.

The couple has now applied for asylum in Hesse. "We fled because we saw no other possibility to save our lives," says Mohammad. "And, like us, the Iranians who are still waiting in Turkey," Zahra adds, "did not become refugees voluntarily."