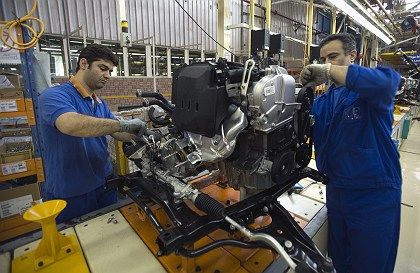 Employees work at Iran Khodro's joint venture assembly plant with France's Renault near Tehran. Germany is to accuse France and the US of hypocrisy over sanctions against Iran.

According to information obtained by SPIEGEL, the economics department of the German Foreign Ministry has collected revealing data which Steinmeier will use to back up his argument against EU sanctions.

Several French companies in the automobile, energy and financial sectors -- including Peugeot, Renault, Total, BNP Paribas and Societé Générale -- have hardly reduced the level of business they do with Iran, according to the Foreign Ministry data. German exports to Iran, in contrast, have dramatically declined.

Even more explosive is the data that reveals US hypocrisy over sanctions. The German Foreign Ministry accuses American firms of bypassing the boycott against Iran, which has been in place since 1979, by creating front companies in Dubai to carry out their business. German politicians have long internally accused the United States of knowingly tolerating the practice. Microsoft software is present in Iran, as is Caterpillar heavy equipment. And it's difficult to overlook the presence of brands like Pepsi and Coca-Cola in Tehran.

The differences in how strictly sanctions are applied by different countries has led to "German firms being pushed out of the Iranian market," a high-ranking source in the Foreign Ministry told SPIEGEL.

Steinmeier is due to meet with the foreign ministers of the five permanent members of the United Nations Security Council -- the United States, France, China, Russia and the United Kingdom -- on Friday on the sidelines of the UN General Assembly in New York. In what are expected to be heated discussions, the six countries will consider imposing additional sanctions on Iran over its nuclear program.

The US and France are pushing for a third Security Council sanctions resolution against Iran, to expand upon the existing two rounds of sanctions, which are mainly aimed at stopping the sale of nuclear-related technology to Iran and preventing dealings with the state bank and other organizations. Iran insists it is only interested in developing nuclear energy for civilian use, but the international community suspects it of pursuing nuclear weapons.

If this week's talks fail, French President Nicolas Sarkozy has proposed that the European Union impose additional sanctions of its own on Iran -- a move that the US supports but Berlin opposes.

Sarkozy repeated his calls for tougher sanctions against Iran in an interview with the Monday edition of the New York Times. He predicted that increased sanctions "eventually will produce results" in persuading Iran to curb its nuclear activities. He added that other punitive measures must be pursued together with other European countries.

Sarkozy also said that France was asking its own companies "to refrain from going to Iran." Paris has already urged French oil giant Total and gas firm Gaz de France not to bid for new projects in Iran and has also urged French banks to stop doing business there, he explained.

The new calls come one day before Iranian President Mahmoud Ahmadinejad is due to address the UN General Assembly. In an interview with the American television network CBS on Sunday, Ahmadinejad played down the fears of war which were recently stoked by hawkish comments by the French Foreign Minister Bernard Kouchner. "It's wrong to think that Iran and the US are walking towards war," he told the broadcaster. "Who says so? Why should we go to war? There is no war in the offing."