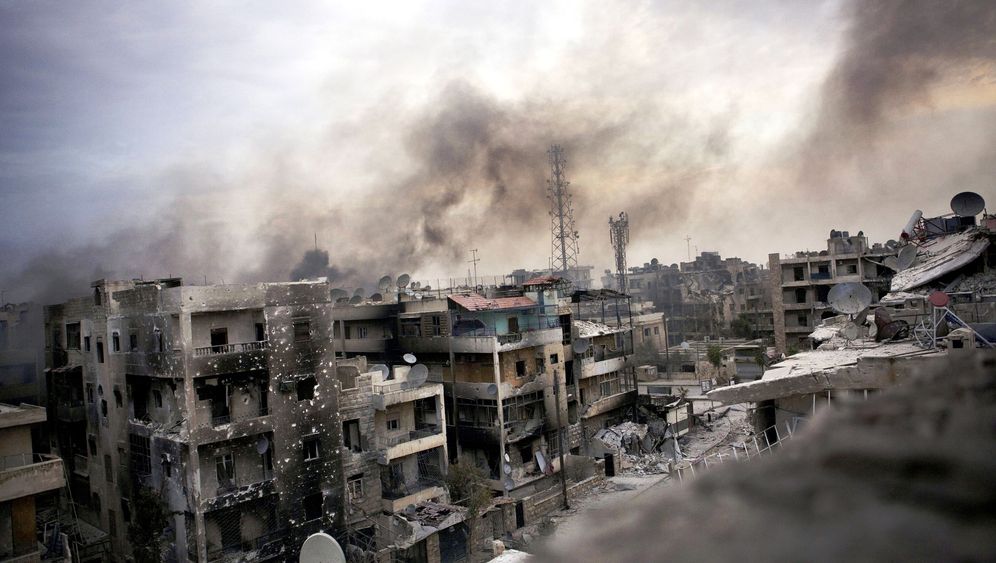 The Frankfurt residence of the Iranian consul general is a yellow villa in the posh neighborhood of Sachsenhausen, with artificial turf in front of the entrance and Persian carpets in the corridors and rooms. There are bowls of pistachios and figs on the table in the reception room, and the walls are adorned with pictures of Iran's late revolutionary leader Ayatollah Ruhollah Khomeini and his successor, Ali Khamenei.

For a few hours last Thursday, this building served as the headquarters for Iranian Foreign Minister Ali Akbar Salehi, 63, who had arrived from New York at noon and had a layover in Frankfurt on his return trip to Tehran. Salehi had just attended the United Nations General Assembly and subsequently met with his counterparts from Egypt, Turkey and Saudi Arabia to talk about the escalation in the Middle East. These four nations form the so-called Syria quartet, which is endeavoring to end the civil war in the country. Salehi is one of the few Iranian top politicians who is familiar with both the West and the East. He studied at the American University of Beirut and received a PhD in engineering from MIT in 1977. In 2009, he became the head of Iran's nuclear program. Now, he is also Iranian President Mahmoud Ahmadinejad's representative abroad.

One day before the interview, Syrian troops fired mortars on a Turkish border town, killing five people, and on Friday another mortar round flew over the border. At least 34 Syrian soldiers are believed to have died from Turkish retaliatory attacks. Turkey is a member of NATO while Syria is an ally of Iran. Salehi has assumed a key role in the conflict.

SPIEGEL: Mr. Foreign Minister, it is beginning to look as though a war could break out on NATO's border with Syria. How dangerous is the situation in the region?

Salehi: In the name of God, the compassionate and the merciful, we have to prevent catastrophes. I call on both sides to exercise restraint. In Syria, thousands are fighting against the government of Bashar al-Assad, and they are armed with state-of-the-art weaponry. If Turkey were to massively retaliate sometime in the coming weeks or months, they would have no objections. They want to render peace initiatives impossible. They are seeking an escalation.

SPIEGEL: Are you referring to the armed Syrian opposition? Or to terrorists from the international al-Qaida network?

Salehi: I don't intend to associate the perpetrators of violence with a specific country or a specific organization. But one thing is certain: Military forces infiltrating Syria are seeking to internationalize the conflict. If the region goes up in flames, then they have achieved their objective.

SPIEGEL: Yet it appears to have been the Syrian military that fired across the border, not the rebels or the perpetrators of violence that you are referring to. Do you condemn Turkey's retaliatory attacks?

Salehi: Every country has the right to protect itself if it is attacked. When the Syrians shot down a Turkish fighter jet in June, though, Ankara refrained from launching a counterattack. At the time, I expressed my recognition of this to Turkish Prime Minister Recep Tayyip Erdogan -- it was statesmanlike and wise. Now, a sense of proportionality must be retained, or we will fall into the trap of the extremists.

SPIEGEL: Since Turkey is a member of NATO, the organization is standing by its side and condemning the incident as an "aggressive act."

Salehi: It would not be appropriate for me to give advice to the Western military alliance. But NATO cannot afford to make a mistake and worsen the situation.

SPIEGEL: Such as the establishment of a buffer zone in northern Syria and a no-fly zone for Assad's air force?

Salehi: By doing so, the West would react just as wrongly as it did in 2011 in Libya. This was an improper interference in the internal affairs of a sovereign state ...

SPIEGEL: ... but it probably prevented a massacre in Benghazi and helped an entire people free itself from a dictator.

Salehi: We should proceed according to the rules of international law. Syria is in the midst of a crisis; four or five of its 14 provinces are facing difficulties. Bashar al-Assad's government largely has the situation under control.

SPIEGEL: You are downplaying the actions of a regime that is shelling its own people -- the civil war has already claimed the lives of 30,000 people.

Salehi: What is happening in Syria is tragic, and its not just government troops that are responsible. Assad poses no threat to the region, or to world peace, for that matter. We are not uncritical of him; the government has made mistakes. Originally there were only calls for more democracy and changes. But then the movement began to be increasingly controlled from abroad.

SPIEGEL: Are you thinking of the US and Israel? Or Qatar and Saudi Arabia, which are arming the resistance and are now calling for an Arab intervention force?

Salehi: Whatever the case, we are dealing with an external push for regime change. Our experiences in Iraq show that some powers are willing to resort to any means and any manipulation. In order to legitimize their war against Baghdad, the US accused Saddam Hussein of producing weapons of mass destruction. Something similar cannot be allowed to happen with Assad.

SPIEGEL: There are hardly any high-ranking international politicians who can still reach Assad. You spoke with the Syrian president over two weeks ago in Damascus, and it was a long and intensive discussion.

Salehi: I had just come from a meeting of our Syria group in Cairo, and I presented to the president what the four of us expect of him: reforms, concessions and sincere changes. He agreed with me and pointed out that he has already begun to introduce these changes. He said that he wanted to work together with a constructive opposition and cooperate with the United Nations.

SPIEGEL: And you actually believe him?

Salehi: In Damascus I met a president who is perfectly aware of the critical situation. He didn't seem to be out of touch, but rather self-confident and combative. The president appeared confident that he could win the conflict in Syria militarily.

SPIEGEL: Every day, there are new attacks. The opposition can now attack even key institutions such as the state television and the headquarters of the intelligence agency. The city of Aleppo, a major financial and commercial center, is in flames.

Salehi: The president is realistic. He does not believe that Syria can be pacified from one day to the next. He assumes that, like in Iraq, there will continue to be additional trouble spots and pockets of opposition.

SPIEGEL: With the exception of Iran, and perhaps Russia and China, practically every government in the world is urging Assad to resign.

Salehi: The president appeared to be open to any inner-Syrian solution, but he categorically rejected a resignation forced from the outside. Which is why he rejects the idea of seeking asylum elsewhere.

SPIEGEL: Egyptian President Mohammed Morsi is demanding that Tehran rethink its position. According to information from Western intelligence agencies, however, your government is continuing to send arms to Damascus and is supporting the regime with military advisers and even elite Revolutionary Guard forces.

Salehi: That is absurd. Syria has an army of 500,000 men; they don't need any forces from us. But of course we sold weapons to Damascus -- before the crisis. It is perfectly normal for us to send military advisers in this context: Every state sends such experts to allied governments. The international sanctions against Iran have forced us to build our own defense industry, which has been highly successful in selling its products. These are perfectly legal deals. We are not doing this any differently than the Germans.

SPIEGEL: Where, in your opinion, is the red line that Assad cannot be allowed to cross? Would it be the use of chemical weapons against the opposition?

Salehi: Any government that uses weapons of mass destruction against its own people has lost its legitimacy. This applies to Syria, and it also applies to us.

SPIEGEL: Another foreign power has just drawn a red line for your government. Speaking before the UN General Assembly, Israeli Prime Minister Benjamin Netanyahu held up a chart intended to illustrate when Iran will have enough enriched uranium to build a nuclear bomb -- and used this to argue that your country should be attacked.

Salehi: The presentation was bizarre; I found it childish to hold up a caricature of a bomb. If the Israelis had wanted to attack us, and if they could have done so, they would have done so long ago. In 1981, they destroyed an Iraqi reactor without warning. But they have been threatening us for years, on every occasion and publicly. They know what would happen if they attacked. We don't want war, but we will defend ourselves. Aggressors will pay a high price.

SPIEGEL: The International Atomic Energy Agency (IAEA) in Vienna has pages of evidence pointing toward the "possible military dimension" of your nuclear program.

Salehi: We insist on our right to enrich uranium for the peaceful use of nuclear energy. There is no proof that we are pursuing nuclear research for military purposes.

SPIEGEL: For months now, you have refused to give the IAEA access to the military complex at Parchin.

Salehi: We have to differentiate between two things here: First, we have our obligations under the non-proliferation treaty, which we are fulfilling ...

Salehi: ... second, there are demands that go beyond this, and that we are not obliged to meet, such as those relating to a military complex like Parchin.

SPIEGEL: The inspectors suspect that scientists there have secretly tested nuclear warheads, and Iran is now attempting to erase all traces of them.

Salehi: That is ridiculous. Nuclear research leaves fingerprints that can never be totally eliminated. I do not want to rule out that we may find a way to open Parchin -- on a voluntary basis, as we have done on other occasions in the past.

SPIEGEL: Concessions in the nuclear talks are urgently expected of you. Among diplomats, there is little optimism that the conflict over your disputed nuclear program can still be resolved peacefully.

Salehi: I am more optimistic here. If our right to enrichment is recognized, we are prepared to offer an exchange. We would voluntarily limit the extent of our enrichment program, but in return we would need a guaranteed supply of the relevant fuels from abroad.

SPIEGEL: Many Western politicians believe that you are just playing for time. After four rounds of UN sanctions, the European Union now intends to toughen its sanctions against Iran on Oct. 15.

Salehi: Not a big deal. The sanctions create inconveniences. For over 30 years now, we have been living with boycott measures that ultimately make us independent and strong.

SPIEGEL: Really? Last year alone, your currency lost over two-thirds of its value against the dollar. The official inflation rate is 25 percent. In Tehran, discontented retailers recently demonstrated and shouted: "Down with the government!"

Salehi: Iranian society is used to living with hardships -- perhaps more so than people in Spain and Greece. We can count on the patience of our people. What about you in Europe?

SPIEGEL: Mr. Foreign Minister, thank you for this interview.