SPIEGEL: Hojatoleslam Karroubi, you are supposed to have recognized Mahmoud Ahmadinejad as president in an interview with a pro-government news agency last week. Is that true?

Mahdi Karroubi: I also told the news agency that this government is not legitimate. And I stand by my opinion that the election was not conducted correctly. But this government is now taking care of the daily political business. Even if a government comes to power via a putsch, it has to bear responsibility for what happens. 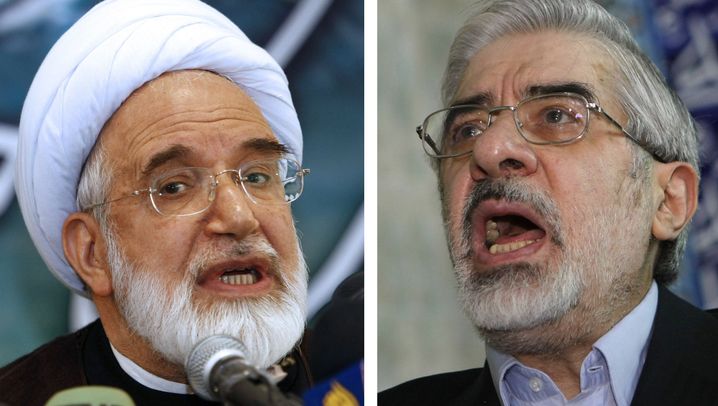 Photo Gallery: 'This Government Is Unworthy'

SPIEGEL: Your remark was interpreted as an offer of compromise.

Karroubi: My comments were not a step backward. There is no sign of a willingness to compromise from our side -- and also not from the other side either.

SPIEGEL: What concessions do you demand from the Tehran regime in order to resolve the crisis?

Karroubi: The political prisoners must be set free, we need freedom of the press and freedom of assembly, our electoral law must be changed and a free election must take place. But then the current government would hardly be able to hold on to power.

SPIEGEL: Will you be taking part if new demonstrations are held this Thursday, Feb.11, an important national holiday which will mark the 31st anniversary of the Islamic revolution?

Karroubi: Just as in every year since the revolution of 1979, I will participate again this time. I will join the sea of people somewhere.

SPIEGEL: Have you discussed it with your fellow opposition politician Mir Hossein Mousavi?

Karroubi: We do not make organizational arrangements, but we maintain friendly contact. He recently visited me here in my home. We talked about the recent executions and were deeply saddened by them.

SPIEGEL: The regime executed by hanging two members of the opposition who were alleged to be members of a monarchist group.

Karroubi: These executions are intended to spread fear and to intimidate people. However, they only serve to deepen the conflict.

SPIEGEL: The regime is demonstrating its iron fist. Are you still calling on your supporters to protest despite that?

Karroubi: We call on (our supporters) to take part in the official parades marking the 31st anniversary of the revolution. But we do not decide which approach the protesters take or what they do.

SPIEGEL: Members of the opposition have long been shouting the slogan "Down with Ahmadinejad," while others are demanding that Supreme Leader Ayatollah Ali Khamenei step down. Are those also your slogans?

Karroubi: When there is a large demonstration, people come together who have different points of view. Some are correct while some are misleading and wrong. Some people, like me, do not recognize the government. But we caution against slogans that call for a break with the system and give the regime a pretext to attack the people.

SPIEGEL: So you think the protesters should abandon their demand that Khamenei be deposed?

Karroubi: I do not want to lead this discussion. For us the important things are the presidential election and those freedoms that are anchored in our constitution. And the fact that this government is unworthy of running the country.

SPIEGEL: The protesters are now going much further than you and Mousavi.

Karroubi: The slogans are getting more and more radical on both sides. That is the result of the intransigent approach of the government and its security forces.

SPIEGEL: Has the protest movement distanced itself from its leaders?

Karroubi: Mousavi and I have served the people in a number of positions of responsibility. As a result we have a certain amount of influence. But Mousavi does not have an organization behind him. I have a political party, but its work is restricted. The protest is a popular movement that is comprised of people from a wide variety of social classes and which acts independently

SPIEGEL:  and which is now calling the entire system into question.

Karroubi: The Iranian people have a well-developed political consciousness. I place my trust in reason and people's experience.

SPIEGEL: The violence is escalating. Is the country in danger of descending into anarchy?

Karroubi: I fundamentally condemn any acts of violence. But naturally there are clashes when security forces take action against the people. Initially they (the protestors) allowed themselves to be beaten up. It was the other side who pushed them so far that they are now defending themselves. It is very possible that things will get out of control. But the government is responsible for that.

SPIEGEL: Do you think the government will last for the full four years of its term?

Karroubi: If Ahmadinejad loses his support, then the parliament will topple him. Many conservative groups oppose him. He is only able to hold on to power with the help of the militias.

SPIEGEL: How can the West support the opposition?

Karroubi: Every movement should be based on the support of its own people. Countries that provide assistance from the outside are doing this out of their own interests. It is enough if nothing false is reported about us abroad -- for example, that the movement is dead.

SPIEGEL: Do you believe that Iran can continue as a theocracy?

Karroubi: Yes, I continue to believe in a religious state. But not one in which people celebrate during Friday prayers the fact that the children of our own people are being murdered and even announce that they will kill even more of them.