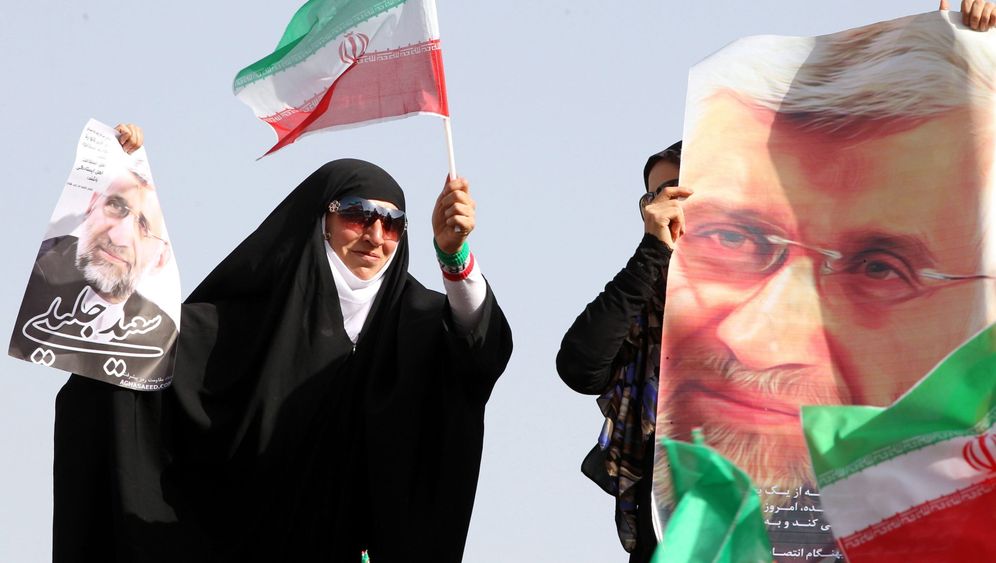 The people of Iran will choose from six candidates during this Friday's presidential election -- all are conservative. Not a single candidate has seriously criticized the system in the Islamic Republic. They belong to the establishment. But one stands out as being particularly extreme.

"Saeed Jalili stands for radical positions," says Walter Posch, an expert on Iran at the respected German Institute for International and Security Affairs (SWP) in Berlin. "The question with this election is: Will Jalili win or not?" If Jalili prevails, it means the radical wing within the Iranian establishment has won.

Elections in Iran are not free. There are no independent election observers monitoring the voting process, so tampering is possible. The outcome of the election is therefore nearly impossible to predict. Aside from Jalili, the candidates include Tehran Mayor Mohammad Bagher Ghalibaf, former Foreign Minister Ali Akbar Velayati, former Minister of Petroleum Mohammad Gharazi, Mohsen Rezai of the Revolutionary Guard and former nuclear negotiator Hassan Rowhani. If none of the candidates receives over 50 percent of the vote on June 14, the top two will compete in a run-off race scheduled for June 21.

The candidates are handpicked by the Guardian Council, whose members were all chosen directly or indirectly by the country's supreme leader, Ayatollah Ali Khamenei. So the results of the election are telling about the distribution of power within the establishment. "The infighting this time is more heated than it has been during other elections," says Posch.

Jalili is running under the slogan: "Resistance is the key to success." For the 48-year-old, these are not empty words. He is serious about the ideology of the Islamic Republic. The arch-conservative veteran of the Iran-Iraq War is a staunch supporter of the system. He accuses his rivals in the presidential race of being too lenient.

They also continue to believe that Iran has the right to its nuclear program. In dealing with the West, however, some of the candidates are in favor of moderation and have signaled a willingness to compromise on the details. The fact of the matter is that it is Ayatollah Khamenei who defines the basic aspects of Iran's nuclear policy. Still, the president does have influence over the tone of exchange with the West. Ultimately he represents Iran in the international arena. President Mahmoud Ahmadinejad, whom term limits prohibit from re-election, will likely be remembered above all for his verbal swipes at Israel.

In some ways Jalili and Ahmadinejad are similar. Both are relatively young nationalist radicals who from rather modest circumstances have managed to climb the ranks of the Islamic Republic.

But Jalili is considered a more faithful devotee of Khamenei. Ahmadinejad, on the other hand, is more of a populist than an ideologue. Unlike Jalili, he has charisma and support among parts of the population. He often challenged the establishment. Even Khamenei was personally opposed to Ahmadinejad's presidency -- and drew the short straw.

A victory for Jalili would mean not only a continuation of confrontational foreign policy, but also of domestic repression.

Under Ahmadinejad's presidency, the political freedoms of Iranians were scaled back, especially after the controversial election of 2009 and subsequent protests.

On the other hand, the populist was also willing to engage in confrontations with the clerical establishment -- such as when he granted certain women permission to watch soccer before Ayatollah Khamenei intervened and reinstated the ban.

Jalili the ideologue would scarcely try to expand the social rights of women. Were Jalili to become president, the political system could very well become even more authoritarian. The power would be even more densely concentrated around Khamenei. As a faithful devotee of the supreme leader, the president would be relegated to a minor role.

During the presidency of Ahmadinejad, Khamenei publicly considered abolishing the office -- the only halfway-democratic-looking element in Iran's political system. "If Jalili becomes president, Iran will undergo an internal conversion and move forward on its course of confrontational foreign policy," says Posch. "With this election, Iran stands at a crossroads."