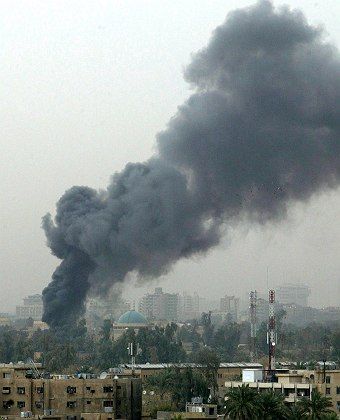 The Green Zone in Baghdad has been under attack.

The US troops housed in "Camp IV" are among the lucky few in Iraq. They enjoy many amenities that make an unpopular tour of duty easier to bear. The conditions surrounding the camp's white, container-like barracks are close to idyllic. Here, in the middle of Baghdad's high-security "Green Zone," the GIs can take their pick between swimming in the Palace Pool or the Liberty Pool, or they can attend performances by uniformed entertainers sent there to take the soldiers' minds off of being stationed in Iraq. They can take part in volleyball tournaments, go to public karaoke evenings or watch salsa performances.

But all such recreational programs have been cancelled until further notice. "All outdoor events cancelled due to heightened threat level," someone has written matter-of-factly on a bulletin board. This little paradise in the heart of Baghdad has closed its doors.

Since Easter weekend, the area surrounding the American Embassy, probably the most well guarded building in the world, has been under fire from Shiite insurgents in eastern Baghdad. Most of the soldiers in the Green Zone now wear bulletproof vests and steel helmets instead of hats to keep out the sun.

According to Reuters reports, mortar or rocket attacks continued on Monday, despite the fact that Shiite cleric Moqtada al-Sadr had ordered his a cease-fire of his Mahdi Army fighters the day before. Many of the attacks on the Green Zone have been launched from Sadr City, a Mahdi Army stronghold in eastern Baghdad.

The words "incoming, incoming" crackle repeatedly from the radios of security agents and the many loudspeakers in the camp. When this happens, residents have only a few seconds to seek cover from incoming rocket-propelled grenades or Katyusha rockets. And whenever the phrase "duck and cover" echoes across the grounds, those in buildings immediately throw themselves on the floor in their protective gear, while anyone still out on the streets slips into one the many concrete shelters marked in yellow and set up on every corner.

The huge building that overshadows Camp IV offers more comfortable protection: former dictator Saddam Hussein's "Palace of the Republic," which now serves both as administrative headquarters and cafeteria for the huge container village housing about 4,000 soldiers and diplomats. Until the overthrow of the Iraqi despot five years ago, the bulky sandstone and marble building housed the leadership of the feared Republican Guard. Now the palace is the official seat of US Ambassador Ryan Crocker and General David Petraeus, the Commanding General of US forces in Iraq -- and is considered bombproof.

Whenever the alarm sounds, employees whose desks are near windows hurry into one of the long hallways, where they line up with their backs to the wall, hoping that the ceiling won't collapse if a grenade scores a direct hit. Their mood isn't improved by the fact that as they stand there, they are typically staring at mosaics and inlays bearing Saddam Hussein's initials in flowery Arabic lettering. They have, however, come to value the fact that Saddam's workers "built a damned safe building."

But what is truly safe in Baghdad these days?

Traditionally the "Mantaka al-Qasr," or palace district, was seen as a well-protected spot in a country long plagued by violence and terror. Saddam had his palace-like fortresses built along a bend in the Tigris River. In those days, the hangers-on of his regime lived on the park-like grounds, to which only the despot's most trusted servants had access.

The country is still ruled from here today, and gaining access to the district is still just as difficult as it was under the old regime. In addition to soldiers and US diplomats, thousands of privileged Iraqis live behind tall concrete walls, sealed off by dozens of checkpoints. Prime Minister Nouri al-Maliki has his official residence here, the key ministries are here, and the parliament is temporarily housed in a former conference center. Because most views are of sandbags and walls, many Iraqis call it the "Gray Zone."

Baghdad proper, outside this high-security tract, is known as the Red Zone and has long been off-limits for most US citizens -- even for soldiers, with the exception of those on patrol. Although the number of attacks has nearly halved since last summer, Western news agencies still counted 119 threatening incidents in the Red Zone in the week before last.

Times have changed dramatically in Baghdad. In Saddam's day, visitors to Baghdad from the West would glance with curiosity at the closed society in the Green Zone. Today Westerners gaze out of the restricted zone into the unreachable city. Simple trips to Western embassies in the nearby Mansur neighborhood on the other side of the district's tall walls, for example, are considered perilous. When the Green Zone comes under fire, American security agents forbid anyone from leaving its confines.

Even for the shortest of trips within the secured zone, such as those to meet with Iraqi members of parliament, the American security agents order armored personnel carriers. Each trip becomes a small convoy, with one vehicle driving ahead and another following behind as "back-up." The entire convoy stops whenever there is an alarm. Passengers who try to get out are immediately pulled back into the vehicle.

Errant projectiles that land outside the restricted area, in the Red Zone, offer the only evidence of where the missiles strike and how much damage they cause. By late Friday evening, the Shiite attacks had already claimed the lives of close to 60 Iraqis. But when it comes to losses in the Green Zone, detailed information is rarely provided. So far the deaths of only two US citizens have been confirmed. Nevertheless, the heavy clouds of smoke above Baghdad's high-security tract suggest that there must have been more direct hits. It's as if the insurgents wanted to transform the district into a black zone.