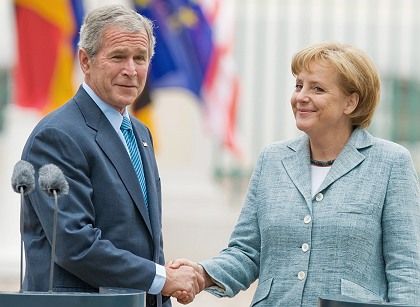 The dispute between Germans and Americans over Iraq and George W. Bush appears to be a thing of the past. Nearly one in two Americans has a very positive image of the European country. And more than one-third categorize German-American relations as excellent or very good, with only four percent perceiving them as bad. Indeed, Americans view Germany as their country's fourth most important ally -- trailing only Britain, Canada and Japan.

The image Americans now have of Germans has also become more modern. Stereotypes of blond-haired, blue-eyed, dirndl- and lederhosen-wearing Bavarians who tell the time of day by a cuckoo clock has given way to a view of a Germany that is a top exporter of high-tech products, a center for research and development as well as home to a lively musical and cultural scene.

A full 49 percent of Americans say they are very interested in modern life in Germany, according to a new poll conducted by the German Information Center at the German Embassy in Washington. The center surveyed about 1,000 US citizens about their views of Germany in September.

"The trend is positive. We are back to where we were before the war in Iraq. This is very encouraing," German Ambassador to Washington Klaus Scharioth said at the presentation of the poll on Thursday..The Iraq debate, in particular, led to a temporary cooling of relations between the two countries. At the peak of diplomatic tensions, only 17 percent of Americans polled expressed a positive image of Germany.

Nevertheless, the Americans' assessment of ties with Germany hasn't returned to previous levels.

Nevertheless, tensions related to the ISAF peacekeeping deployment in Afghanistan could create new burdens for the relationship.

Indeed, the Afghanistan deployment may test the strength of the trans-Atlantic relationship yet again. Both Republican presidential candidate John McCain and Barack Obama of the Democrats have called for increased European military engagement in Afghanistan.

Are Americans the Better Environmentalists?

The German-American relationship is largely defined by economic interests. Last year alone, the flow of trade between the two countries surpassed $140 billion.

However, US readiness to follow international guidelines has ebbed slightly in comparison to polls taken in previous years. It's a development that reflects the findings of other trans-Atlantic public opinion polls: Americans are showing more of a willingness to address climate change and environmental protection, but they are often skeptical about the approach to these issues taken by other countries.

The results of the poll come at a time when Germans are following the US presidential election with great interest. The German media is providing more comprehensive coverage of the election than ever before.

But that media attention is not reciprocated. The US media crisis has created a situation where American newspapers, magazines and radio and TV stations are shuttering their foreign bureaus. This hasn't escaped the attention of Americans, either.

The German Information Center poll found that 51 percent of Americans said the media did a poor job of informing them about Germany -- an increase of 17 percent since 2004.