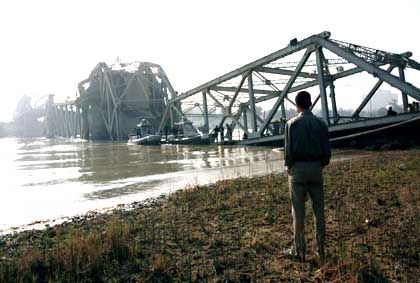 Iraqis are fleeing the bombs and destruction in their homeland. While most refugees are in the neighboring countries of Jordan and Syria, many of them are heading to Sweden.

Ridha Mohammed recently arrived at Stockholm's Arlanda International Airport. He handed his forged passport to an unknown companion and waited for a while in the arrivals hall. Then he told Swedish immigration agents where he was from. As an Iraqi refugee, he didn't have to worry about any potential problems.

Ridha, 40, wants to "start a new life" in Stockholm. He plans to bring his wife Tamathur, 36, and the couple's three children to Sweden as quickly as possible. "Anything is better than Baghdad," he says, even though every phone call with his family is "heart-breaking."

For a long time, life in Baghdad wasn't half bad for Ridha, who lived with his family in a decent apartment in Baghdad Jadida, a neighborhood in the east of the city. But the family's well-ordered life had begun to come apart recently. "Bombs every day," says Ridha, "morning, noon and night, and never any security."

Ridha, like thousands of his fellow Iraqis, has found a new life in northern Europe. Sweden, because of its liberal visa requirements, guarantees Iraqi expatriates the right of residence in the country. Last year Sweden welcomed more than 9,000 Iraqis, which was close to 50 percent of all Iraqi refugees arriving in Europe in 2006 and four times as many as in the previous year. Eight hundred Iraqis fled to Switzerland, and almost 2,000 Iraqis applied for asylum in Germany in 2006 (although only 1.1 percent of those applications were approved). The United States, which launched its crusade against the "Axis of Evil" by invading Iraq, accepted less than 600 refugees from Baghdad and other Iraqi cities.

According to estimates by the office of the United Nations High Commissioner for Refugees (UNHCR), about two million Iraqis have left their country since the war started in 2003, most going to neighboring Syria (1.2 million) and Jordan (750,000). Some return as soon conditions improve in their village or city.

At the same time, the flow of refugees to Europe is increasing. About 80,000 Iraqis already live in Sweden, where the government and municipalities provide generous financial support for language courses, job training, apartments and welfare benefits. Life is so good in Sweden that families are encouraging their relatives and friends to follow their example and move there.

Masin, 56, paid $70,000 to smugglers to bring him and his wife and their five grown children to Sweden. He worked as a construction engineer in the northern Iraqi city of Mosul, and comes from a Christian family. "We are caught between all fronts," he says. "Everyone is against us, the Shiites, the Sunnis and even the Kurds."

It began with daily threats. Soon his wife was forced to wear a headscarf on the street to attend church services. Neighbors avoided the family. Then the first threatening phone calls started. They wanted $150,000 -- or his life. "You are kuffar (infidels) and you must die," the caller said. That was enough for Masin. In early November a middleman drove the family to Amman, where they were given fake passports and tickets to freedom.

Masin now lives in Södertälje, a city southwest of Stockholm. Of the city's population of close to 82,000, more than 6,000 are from Iraq. Many of them live in low-rent housing in the city's Ronna neighborhood -- earning it the nickname "Little Baghdad."

The people smugglers are becoming increasingly professional and the refugees more numerous. Once they have set foot on Swedish soil, be it in the arrivals area at Arlanda or at the end of the Oresund Bridge near the southern Swedish city of Malmö, they are virtually assured a right of residence, as well as the right to travel within the borders of the European countries that are signatories to the Schengen Agreement. "We are still doing this gladly," says Tobias Billström, the immigration minister in Stockholm's new center-right government. But that could change quickly if the mood shifts, and not just in Sweden.

The European Union's interior and justice ministers are meeting on Friday in Luxembourg, and one of the topics on their agenda will be the issue of Iraqi refugees. The EU Commissioner for Justice Franco Frattini is expected to present a plan of action to the summit. On Wednesday, Frattini's spokesman said that Brussels was going to offer the 27 member states EU funding to help absorb the Iraqi refugees.

This follows an international donors' conference held by the UNHCR in Geneva on Tuesday and Wednesday. The meeting was aimed at collecting funds to improve the situation of the Iraqi refugees in the neighboring states. Addressing the meeting of 450 officials from 60 countries, UN Secretary-General Ban Ki-moon said that "all of us must recognize that this situation is a global responsibility with international repercussions." On Tuesday the US pledged $18 million toward UNHCR operations for Iraqi refugees. But Amnesty International and Human Rights Watch have called on both the US and the UK to do more to help Iraqis who have fled the country to resettle.

The alternative to the flight to Europe would be to keep as many Iraqis as possible in Syria and Jordan, the very countries that have already absorbed the bulk of refugees from neighboring Iraq. "The governments in Damascus and Amman are concerned and worried about the tense situation," says Billström. UN High Commissioner for Refugees Antonio Guterres agrees: "A very limited number of countries are paying a very heavy price."

Sweden is one of those countries. Stockholm's social welfare agencies fear that up to 40,000 Iraqi refugees will enter the country this year. For this reason, say critics, the EU Commission and individual member states should be sending more than just experts and translators to Stockholm to help the Swedes handle the bureaucratic challenges the flood of refugees poses. They should also assume more responsibility and "share the burden," says Billström. Even Washington has indicated that it will consider accepting 7,000 Iraqi refugees.