There is no longer any doubt: The pace of climate change is accelerating. Of the 20 hottest years measured since records began, 19 have occurred since 2000. The top five were the last five years.

Summer 2019 saw a new temperature record set in Germany of 42.6 degrees Celsius (108 degrees Fahrenheit) and 46 degrees in France. Preliminary findings indicate that the world experienced its warmest average temperatures ever during the months of June, July, September and October of this year.

Only the El Niño-fueled year of 2016 remains unsurpassed, with temperatures boosted by the natural weather phenomenon that heats up the eastern Pacific every few years. Indeed, 2019 could ultimately beat out 2015 for second place and will definitely exceed 2017, 2018 and, as has been clear for some time, each of the 1,000 years before that.

It is, of course, not possible to accurately predict where 2020 will fit in. It is clear, however, that the coming year will once again be marked by extreme weather events such as heat waves, excessive rainfall, thawing of permafrost, glacier melting, tropical storms, forest fires and droughts, even though it remains difficult to attribute a single weather event to climate change.

The new Greenhouse Age is dawning irrevocably, and the state of the world is becoming increasingly precarious. In October 2019, global sea levels were at their highest ever since the start of satellite measurements in 1993. The oceans are warmer than ever before, and the ice sheets of Greenland and the ice shelves of West Antarctica have thinned to an even greater extent than predicted.

The cause of the highest temperatures in a millennium can be found in the atmosphere. Never before in the past 3 million years has our atmosphere stored as much of the greenhouse gas carbon dioxide (CO2) as it does right now.

Before the Industrial Revolution, the concentration of CO2 in the atmosphere remained relatively constant for thousands of years at between 260 and 280 parts per million (ppm). But then, mankind began burning ever-increasing amounts of fossil fuels and the CO2 content of the atmosphere rose. The planet reached a value of 320 ppm in May 1960. On May 9, 2013, that figure crossed the 400-ppm threshold for the first time. And in 2019, the concentration reached its record level of 415.7 ppm.

The values decrease slightly from May to September owing to the abundance of plants growing in the Northern Hemisphere in summer that absorb CO2 through photosynthesis. Next spring, though, is sure to set a new record, because despite the Paris Climate Protection Agreement of 2015 and annual climate conferences like the one currently being held in Madrid, global CO2 emissions are still on the rise. After stagnating between 2014 and 2016, they have been growing ever since.

This is the shocking truth about the "climate crisis" that the European Parliament and many countries and cities declared in 2019. At least since the Rio de Janeiro Earth Summit in 1992, researchers have been warning that CO2 emissions need to be reduced. But that hasn't happened. On the contrary, annual global CO2 emissions have increased by 60 percent since then.

Four years ago in Paris, countries set the goal of limiting global warming to well below 2 degrees Celsius by 2100 or, if possible, even 1.5 degrees Celsius. The Intergovernmental Panel on Climate Change (IPCC) calculated one year ago that it is even still theoretically possible to meet the lower of the two targets, but doubts persist about whether it is still feasible politically, economically and in practical terms.

The world has already warmed by 1.1 degrees compared to pre-Industrial Revolution levels. The IPCC believes that meeting the 1.5-degree target would require an extremely ambitious effort, requiring that the world halve its CO2 to roughly the level of 1979. And we would have to do so by 2030, just 10 years from now. It would also require that CO2 emissions be further reduced to zero by 2040. For the more realistic 2-degree target, CO2 emissions would have to be reduced by a quarter by 2030.

If both targets are missed, the only other possibility for a future with a climate that is still bearable would be for humanity to find a way to artificially extract hundreds of billions of tons of CO2 from the atmosphere at extremely high costs, using large-scale technologies for which there are no guarantees that they will work.

'Nowhere Near on Track'

The prospects for reaching the 1.5-degree goal, though, are "on the brink of becoming impossible," researchers warned in the annual "Emissions Gap Report" compiled by the UN Environmental Program and released on Nov. 26. The report takes a look at the CO2 reductions countries should be undertaking with those that they are actually achieving.

Enormous discrepancies become apparent in the report. Even if the countries were to achieve all the climate change goals they have committed themselves to so far, global warming would still exceed 3 degrees Celsius by 2100, according to the report. This would cause a sea level rise of half a meter (1'8"), meaning cities like Miami or Shanghai might have to be abandoned.

In order to achieve the 1.5-degree target, though, the countries of the world would have to multiply their efforts -- and ensure that they emit 32 billion tons less CO2 by 2030. The UNEP report states that even just 2-degree target would require a rapid reduction of total CO2 emissions by around 15 billion tons.

It's not impossible, but it is extremely difficult. Researchers who worked on the UN report say achieving the 1.5 degree goal would require that each country reduce its CO2 emissions by 7.6 percent each year between 2020 and 2030. In order to achieve the 2-degree target, reductions of 2.7 percent per year are necessary. "We are nowhere near on track to meet the Paris Agreement target," said Petteri Taalas, secretary-general of the World Meteorological Organization, summing up the situation.

Meanwhile, UNEP head Inger Anderson has said that "radical transformations" of economies and societies toward increased sustainability are now needed. Otherwise, she says, we will find ourselves facing a "planet radically altered by climate change." There is no third option.

The UNEP report is critical of lack of action taken by countries around the world despite the promises they have made. When the first "Emissions Gap Report" was released in 2010, many countries promised to phase out subsidies for fossil fuels, but little has happened since then. Others promised to stop deforestation, but often enough, words weren't followed by deeds.

The new head of the European Commission, Ursula von der Leyen, announced a "European Green Deal" on Wednesday, which the commission said would likely require investments of over 1 trillion euros in additional climate protection measures by 2030. The aim is for the entire Continent to become carbon-neutral by 2050, at least according to the official plan. The measures that will ultimately be taken to achieve this, however, will likely fall short of UNEP's demands.

Are wildfires like this one in California the new normal? Scientists are describing an "existential threat to civilization."

The tone of the UNEP report is largely pessimistic, but it does contain passages that leave some room for optimism. The cost of producing renewable energy has fallen much faster than experts thought possible just a few years ago. The price of solar energy, for instance, has dropped by more than 75 percent since 2010, while the price of wind power has gone down by around 35 percent.

In many parts of the world, renewables are already the cheapest source of energy. A surprising number of coal-fired power plants are therefore being shut down sooner than expected, or are simply not built in the first place. The report's authors see enormous -- and realistic -- potential for reducing CO2 by 2030 in the areas of green power generation, reforestation, electromobility and more energy-efficient industry.

So, has the era of renewable energies finally dawned? Not entirely.

UNEP and its partners, including the Stockholm Environment Institute, have published another report. This one examines just how many fossil fuels will be extracted from the earth in the foreseeable future on the basis of decisions that have already been made, investment commitments or permits that have been granted.

At the moment, the global mean temperature is rising by 0.2 degrees Celsius per decade. From this, barring some radical about-face, it can be surmised that the earth will already be 1.5 degrees hotter in 2040 than in the pre-industrial era -- 60 years sooner than predicted by the Paris Climate Agreement.

Prospects like these make some climate researchers nervous, because as global temperatures rise, so does the risk that so-called tipping points in the climate system will be reached. If these thresholds are exceeded, self-reinforcing and perhaps irreversible processes could occur that might lead to even more warming.

This is already happening with sea ice in the Arctic. Because it's so bright, it reflects massive amounts of solar energy back into space. But if the ice melts due to global warming, like it is already doing in the summer months, that solar energy gets absorbed by the sea, which then heats up and melts even more ice.

A warmer Arctic also results in more permafrost thawing, which allows huge amounts of methane, a particularly potent greenhouse gas, to escape into the atmosphere. In turn, the temperature rises even further and more ice melts on, say, Greenland. This fresh water then pours into the Atlantic, which could cause sea levels around the world to rise and could also alter the Gulf Stream, the strong ocean current that warms Western and Northern Europe.

The Gulf Stream is primarily driven by the thick, heavy salt water that sinks along Greenland's coast. If this water is diluted by enough fresh water, the current could weaken, which would disrupt ocean circulation worldwide.

In the scientific journal Nature, researchers from the Potsdam Institute for Climate Impact Research (PIK) and other organizations have now expressly warned against these and other tipping points. It is conceivable that some of these could trigger others like dominoes; if a critical mass is reached, the earth's composition could be changed quite abruptly.

Our planet is already considerably warmer and it could be "dangerously close" to these tipping points. This possibility, though theoretical, constitutes "a planetary emergency" and "an existential threat to civilization," PIK founder Hans Joachim Schellnhuber and his colleagues write.

Does this count as alarmism? Absolutely. Other climate researchers have their doubts as to whether these tipping points are really that imminent. But what if they are? 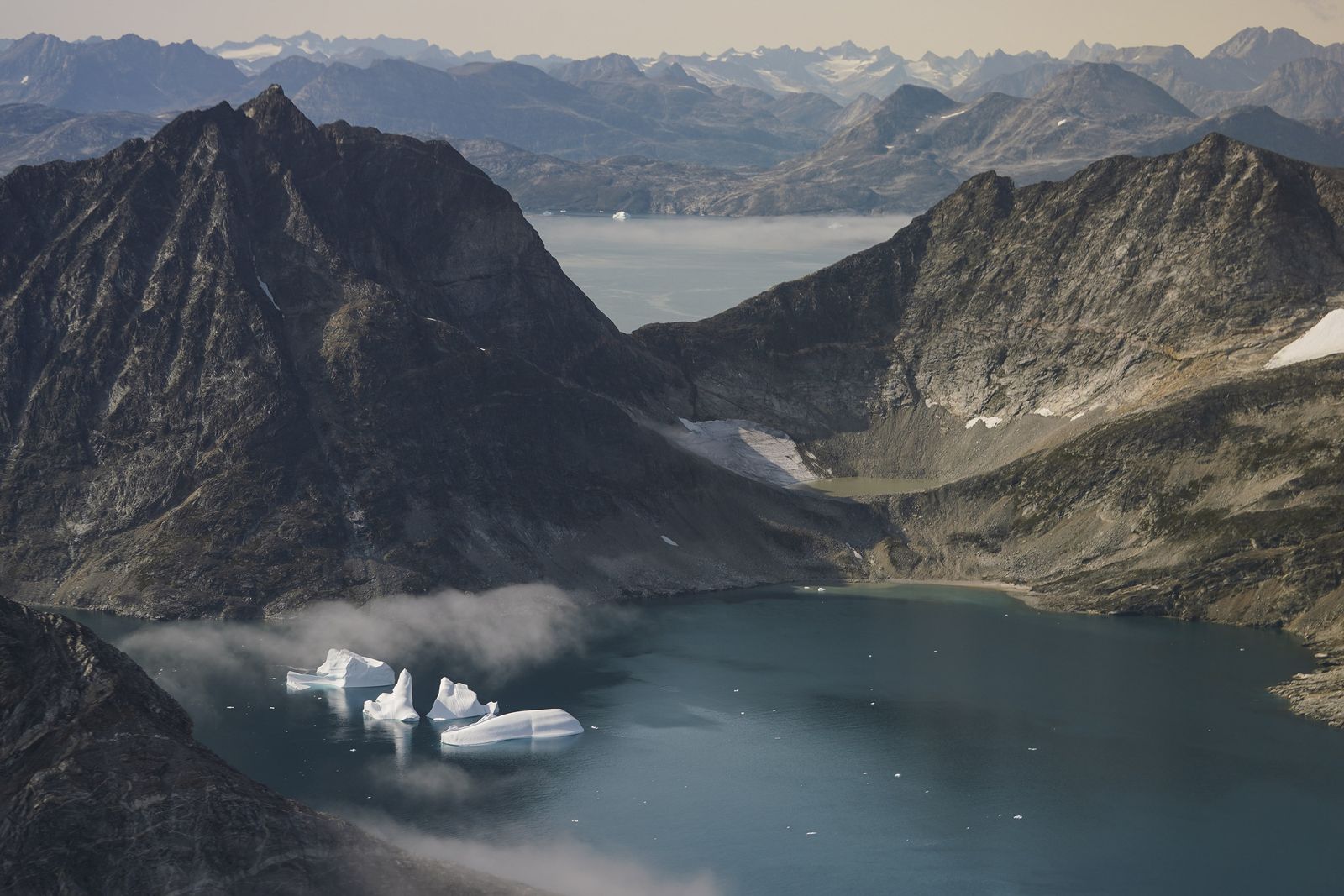 Melting ice in Greenland in August: The planet is warmer than it has been in over 1,000 years. 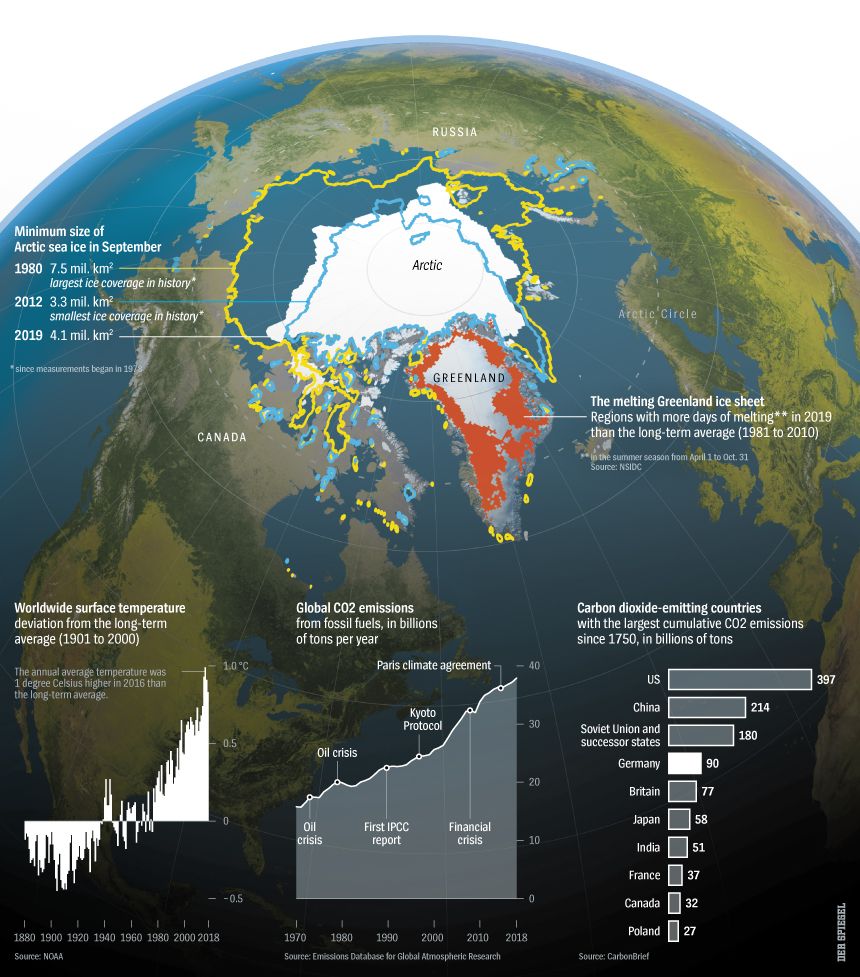 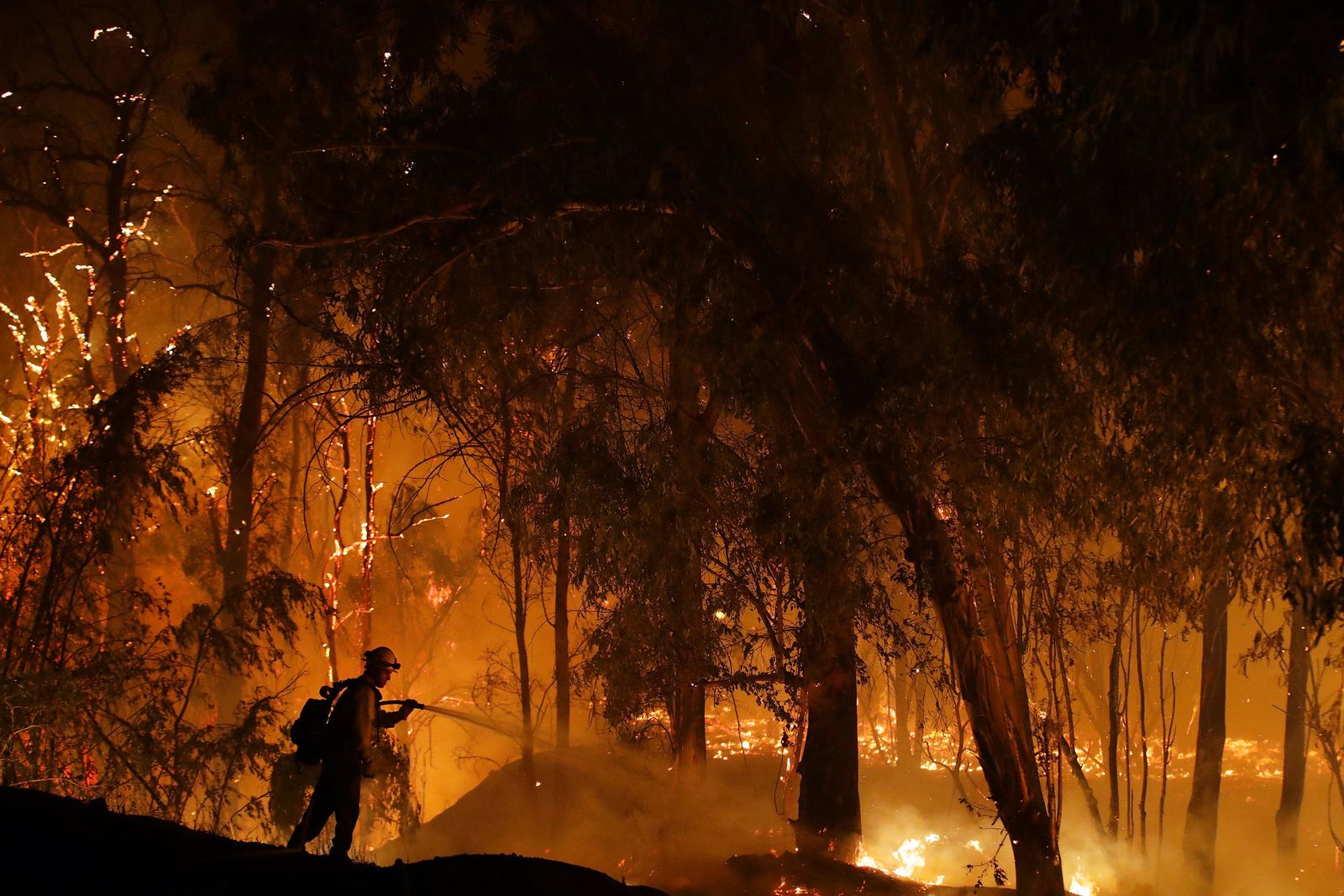 Are wildfires like this one in California the new normal? Scientists are describing an "existential threat to civilization."