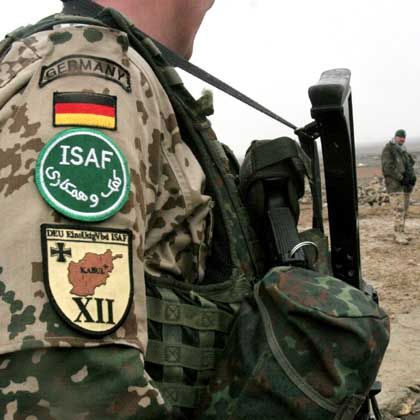 A German soldier in Afghanistan: The mission is getting more dangerous by the day.

It was a dark Wednesday for the Bundeswehr in Afghanistan. First, a car laden with explosives managed to wedge its way between an armoured Wolf jeep and a Mungo truck near Kunduz at 6:35 p.m. Then the driver detonated a bomb. It was only by chance that nothing terrible happened in Esakhail that evening. Other than suffering from fear and shock, the Germans escaped uninjured. The Germany army, the Bundeswehr, though, knew the area had become dangerous. Indeed, just days before, at the end of March, an explosive device was detonated near a military convoy.

Just two hours later, the next alarm bells began to ring. A reconnaissance patrol was driving a Fennek vehicle out of the camp at Kundus as the Germans were attacked with machine guns and rocket propelled grenades. The soldiers reacted to the attack, which set fire to a camouflage net on a vehicle, by firing back from their own cannon. The troops returned to the base after the incident and no German soldiers were injured.

"Neither Peaceful nor Stabile"

"It's happened again," said one German officer, adding that the men had had tremendous luck.

The incidents illustrate the degree to which the security situation in northern Afghanistan has deteriorated in recent weeks, as winter has come to an end. Despite official statements, the region is "neither peaceful nor stabile," Bundeswehr General Inspector Wolfgang Schneiderhan told a closed-door meeting of the German parliament's defense committee, describing the current reality on the ground in northern Afghanistan. Nor did he hold back with his warnings that summer could get pretty hot there.

Schneiderhan told the defense experts of Germany's main political parties that the three attacks on the Bundeswehr had been "alarming developments" in the army's area of deployment in Afghanistan. With increasing violence in the north, he said, the soldiers are facing "new challenges."

A Threat to Reconstruction

But it's more than just the direct attacks against German troops that is raising the alarm bells inside the Bundeswehr's leadership ranks. Schneiderhan also provided details about attacks on civilians helping with reconstruction projects in the area. During the last four weeks, the general said, seven aid workers have been killed in three targeted attacks.

Even if those actions aren't targeted at German soldiers, the still represent a threat to the success of their mission in the Hindu Kush -- after all, providing protection for those involved in efforts to rebuild the country is one of the concrete goals of the German deployment in Afghanistan.

The attacks against aid workers have been merciless. First, an unknown assailant shot and killed an Afghan employee of a Dutch NGO in his car in the Balgh province north of Mazar e Sharif. Six days later armed men pulled four Afghanis out of their cars before shooting them in cold blod. One day later, in the province of Kunduz, the area where the Bundeswehr is deployed, an attack was perpetrated on an organization responsible for mine sweeping, and two Afghan helpers were murdered.

The intensified atmosphere is making soldiers and leaders in Bundeswehr alike nervous. And officers were deeply angered recently when a trade publication for defense issues published an aerial photo of the German military base at Mazar e Sharif that showed details like residential areas for soldiers and where the tanks are kept.

The image, some felt, was little more than an invitation to the Taliban and other enemies to attack the base.