The men sitting in Café L'Aurora in Tripoli stare silently into the smartphone Najib Ali is holding in his hand. They're watching a horrific video depicting the decapitation of 21 Egyptian Christians, probably on the beach at Sirte. The victims are wearing orange overalls while their Islamic State (IS) killers are clad in black. The men in the café have already seen the video numerous times and yet they continue to watch it, looking for any details that might indicate the horrific acts didn't really happen.

"Have you ever seen a Libyan that tall?" one asks. And what about the professional camera work? "A major power has to be behind it." And how could Sirte, the hometown of former dictator Moammar Gadhafi, suddenly come under Islamic State rule? The release of the video on Sunday, Feb. 15, shortly before the fourth anniversary of the insurgency against Gadhafi, has led many Libyans to react reflexively with desperate denials of reality.

The truth is that Libya is well on its way to becoming a failed state -- making it the perfect prey for IS. Furthermore, Libya is close to Italy, has plenty of oil and offers a possible corridor to Boko Haram in Nigeria as well as to Islamists in Mali and in the Sahara. Indeed, if IS succeeds in solidifying its presence here, the terrorists could pose a threat to Southern Europe in addition to destabilizing all of North Africa.

The site of the executions appears to be a beach located near the Mahari Hotel in the center of Sirte. The prisoners were reportedly held in the hotel, where a number of foreign jihadists are thought to reside. Several cameras were used to make the professionally produced video. Indeed, it is highly possible that IS propagandists with technical expertise and training from Syria or Iraq produced the Sirte video.

A Show of Force to Libyans

It's no coincidence that the executions took place in Sirte, either. The city is the Islamic State's new center of power in Libya. A short time ago, the terrorists took over TV and radio stations here, which have since been broadcasting jihadist songs and speeches given by IS spokesman Abu Mohammed al-Adnani. In addition, offices of the authorities have been occupied, oil terminals attacked and foreign workers beheaded. Just recently, government employees were even forced to publicly apologize for having worked for the Libyan state. No one dares criticize the new rulers with one witness reported that many are just happy to still be alive. "The massacre is a warning to Europe, but also a show of force aimed at us Libyans."

Last autumn, the Libyan terror group Islamic Youth Shura Council in Derna joined forces with IS, but that port city is surrounded by government troops, limiting the group's movement. The terrorists in Sirte, on the other hand, are free to move to the west and into the Sahara. They've also gained supporters in Benghazi and Tripoli. Meanwhile, members of Islamist militias are also defecting to IS. Libya has in fact become the caliphate's most important colony in North Africa after Egypt. Fighters from around the world are trained here, with some getting deployed locally and others being sent to Syria or Iraq.

The Christian massacre has the potential give the country a final push into open civil war in which everyone is fighting against each other: enemy militias, their foreign supporters and the jihadists. But the dissolution of Libya started long before. In parliamentary elections last summer, Islamist parties associated with the militias in Misrata, an important trade city, fared miserably and have been unwilling to accept their defeat. Under the leadership of the Libyan Dawn, the militias captured the capital city of Tripoli. They deposed the newly elected and internationally recognized parliament and reinstated some members of the previous parliament, leading the elected members to flee to Tobruk.

'IS Has Been Waiting for this Kind of Chaos'

Since that split took place, the country has effectively become home to two parliaments, but also two governments and two armies. Both sides have been fighting each other since last autumn, attacking airports, oil terminals and cities. On the side of the official Libyan government, General Khalifa Haftar is waging war against the Islamists, with military support from Egypt and the United Arab Emirates. On the other side, the Islamists' Dawn alliance is backed by Turkey and Qatar.

The bloody power struggle is leading to Libya's collapse. Oil production has fallen dramatically, from over 1.6 million barrels a day to under 500,000. Revenues are still sufficient to cover the salaries of government workers and to subsidize gasoline, but there isn't enough left over to maintain hospitals or cover necessary infrastructure repairs.

"IS strategists have been waiting for precisely this kind of chaos for some time now," says Libyan security expert Mohamed Garbi. He says the conflict has weakened the state to such a degree that is easy to capture. IS, for its part, would like see this vulnerability persist. In the video, one of the militants stands with a knife in his hand and says, "We will conquer Rome, by the will of Allah." But the Christian massacre was more likely aimed at Geneva peace talks, where delegates of most of the factions in Libya managed to negotiate a ceasefire in January during discussions facilitated by UN special envoy Bernardino Léon. It appears that the beheadings represent an effort on the part of Islamic State to dismantle that success.

Should intense conflict erupt once again in Libya, the jihadists would benefit from the power struggle by constantly shifting its loyalties. It is a strategy that worked well in Syria, even allowing it to militarily outmaneuver stronger rebel groups such as the Nusra Front. IS, after all, had an advantage that the others did not: unity.

Such unity has been lacking in a Libyan society that has drifted apart since the victory over Gadhafi. One of the initial failings of the government after the revolution was that it attempted to reintegrate the fighters into civilian life by paying them good wages, but without providing them with prospects of training or jobs. By doing so, it unintentionally provided support for the militias. Just after Gadhafi's fall, Libya's Warriors Affairs Commission counted around 60,000 revolutionaries, a figure that had already grown to 200,000 a year later. There were 500 militias. Given the amount of distrust they had toward the new government, they didn't put down their arms. Instead they took up the hunt for criminals themselves -- or took up illicit activities. For two years, the militias have had the upper hand in the country, extorting parliament and even driving a prime minister out of the country.

Only days after the modest success attained in Geneva, an IS commando stormed the Corinthia Hotel in Tripoli, where foreign firms and the illegitimate government had hunkered down. The attack, which claimed nine lives, further stoked already considerable distrust between the parties in the conflict. In Tripoli, many believed the government in the east had been behind the attack. And now comes the video, a precisely calculated composition of horror in which even the ocean was colored blood red to augment the effect.

After the video's release, the Egyptian air force conducted air strikes on jihadist positions. Six of 12 IS bases in Derna were reportedly been hit. It's the kind of response IS might even have desired in the hope that it could draw Egypt into the civil war and further heat up fighting between the factions.

A military intervention in Libya could have disastrous repercussions for Egypt. Already, the policies of President Abdel Fattah el-Sisi, who has denounced virtually all opponents as terrorists, are driving the opposition underground -- possibly even into the hands of Islamic State. Meanwhile, the fact that IS in Sirte released kidnapped foreign workers of the Sunni faith and chose to only murder Christians could further exacerbate conflict between Egyptian religious groups. But there are other factors at play, too, like the 200,000 Egyptian workers still believed to be in Libya and whose return home could spark domestic tensions. Or the fact that other Egyptians are also believed to have been kidnapped.

Islamic State is already expanding its reach to the south. In the city of Sabha, a first meeting took place the week before last between commanders with several Islamist militias to discuss the possible establishment of the Fezzan Province of the Islamic State. If that happened, it would place the smuggling routes for refugees, weapons and drugs in IS hands and create a corridor for the group to other Islamist groups south of Libya.

The group reportedly receives its financing from Abdul Wahhab al-Gayed, a former member of Libya's parliament. As the head of the Border Guard, he received around €250 million from the government in mid-2013. However, the money never went where it was supposed to. It is believed that al-Gayed used it to procure weapons for his militia, which could now be on the verge of joining forces with IS.

Islamists in the coastal regions have also armed themselves. "There are thousands of Kalashnikovs, rocket-propelled grenades and tons of munitions ready for deployment in Derna and Sirte," says one former anti-Gadhafi activist who is well-connected there. The source says the extremists obtained money for the purchases through kidnappings of business people.

There have been other criminal efforts to raise money as well. In October 2013, members of the Ansar al-Sharia terrorist group robbed a central bank money van in Sirte that was reportedly carrying €39 million. Now it appears that Ansa al-Sharia is merging with IS. Last Wednesday night, residents in Sirte observed a long IS motorcade in the city. "Nobody knows where so many fighters and weapons suddenly came from," says one journalist living in Misrata who asked not to be identified. He worries his home city may become the terrorists' next target.

If that happens, IS would make good on the announcement it made in December that it would establish three provinces in Libya -- one in the east, another in the west and a stronghold in the south. 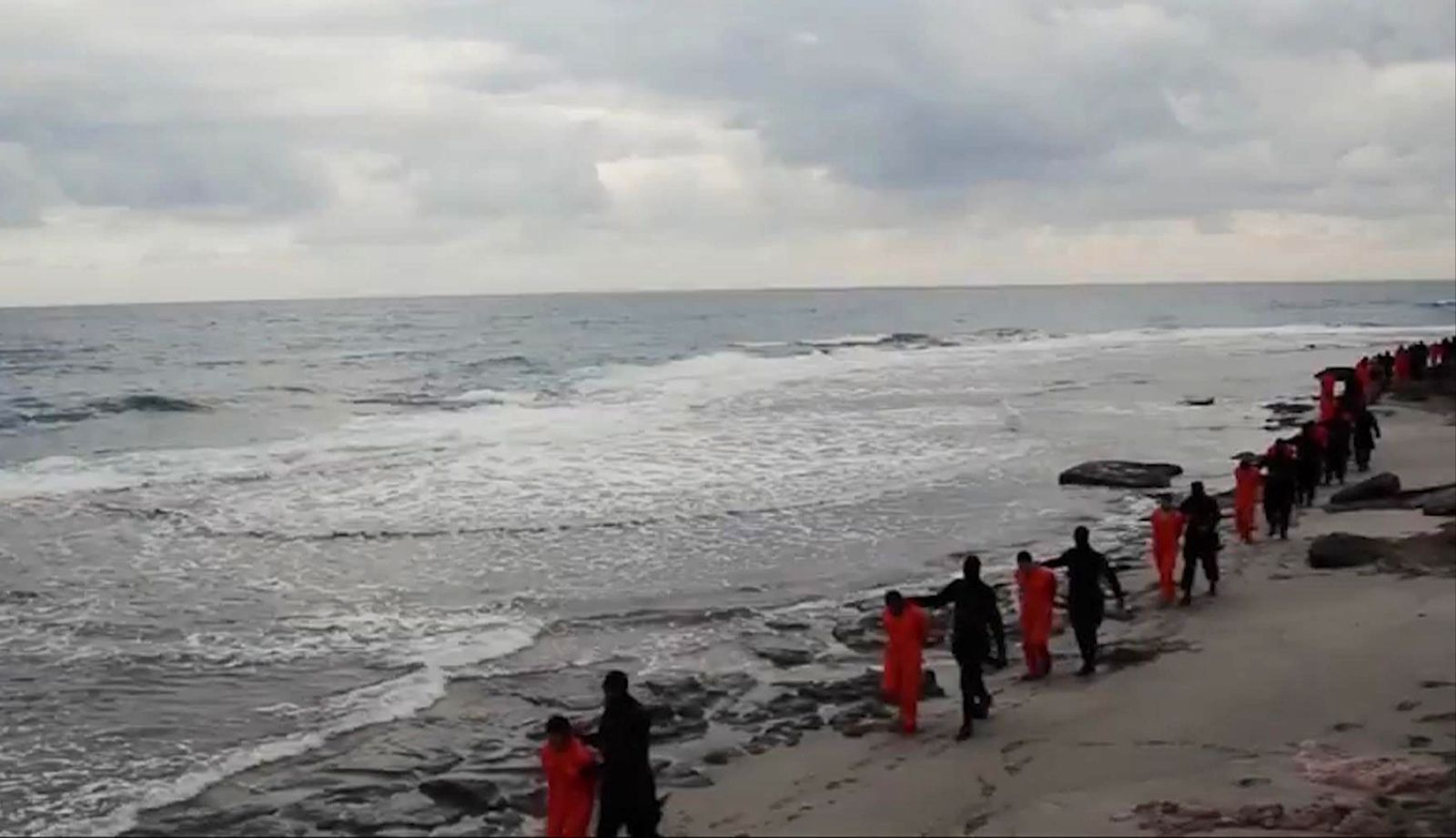 A video grab shows militants loyal to the Islamic State marching Egyptian Coptic Christians to their deaths by beheading in Libya.