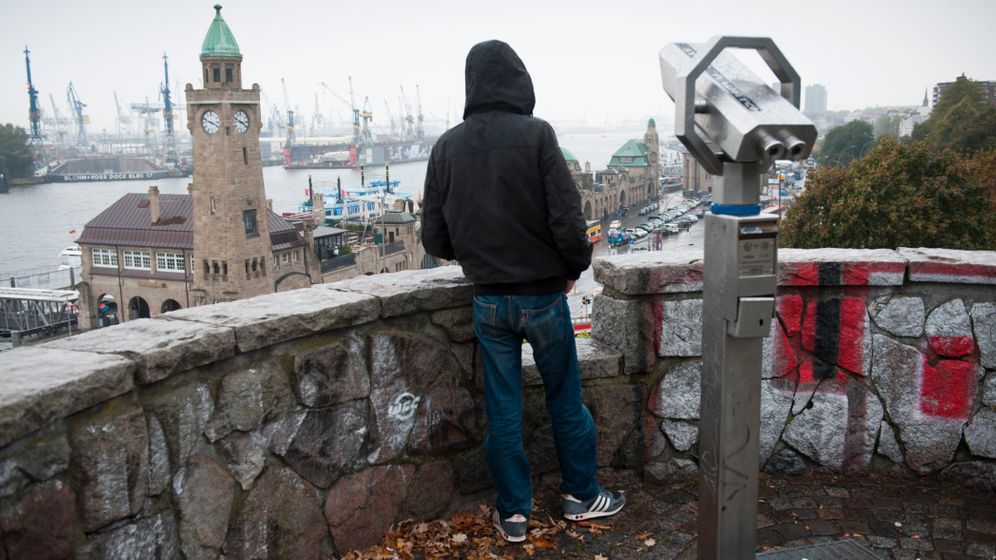 A few months before Sedat Aras set off to join the jihad, the young man took down the Kurdish flag which had been hanging on the wall of his bedroom in his family's home in Hamburg, Germany. "I'm a mujahedeen now," he said.

Aras' family reacted with indifference at the time, his older sister Elif (*) recalls. "I thought this was just my brother's usual nonsense," she says. "Sedat had been on an Islamist trip for quite a while." Elif Aras shakes her head, her eyes dry and empty. "I had no idea what havoc this idiocy would wreak," she says.

In July, her brother took off for Syria together with others holding similar beliefs. German domestic intelligence sources believe the group included around a dozen young jihadists from Hamburg. Sedat's family are Alevi Kurds and yet he is now fighting on the side of Islamic State (IS), even though it is attacking Kobani, the Kurdish city in Syria that has become the symbol of the war against the Sunni terrorist organization. In his sister's eyes, Sedat is waging war against his own people.

After her brother disappeared, Elif also left Germany and flew to Istanbul. The 33-year-old says she could no longer take the gossiping of her neighbors in Hamburg or the calls from worried friends. "I blame myself for not having noticed Sedat's transformation earlier and for not having kept him from leaving," she says.

The Magnetic Force of Radical Islam

The trip to Syria by German-Kurd Sedat Aras, 23, follows a rapid period of radicalization. His story combines the identity crisis experienced by some children born into immigrant families with the seemingly magnetic force exerted by radical Islam.

Many immigrants have had to work very hard to establish themselves and eke out a living for their families in Germany. But suddenly a conflict raging thousands of kilometers away in Syria and Iraq began intruding on their lives. Salafists began recruiting young Muslims in Germany to join the jihad. And so it was that the war in the Middle East also reached immigrants in Germany, driving a wedge between family members here.

The developments have shed light on a little understood generational conflict that has erupted among the families currently losing their sons to the jihad. It is a conflict that affects Turkish and Arab immigrants as well as people of ethnic German origin who have converted to Islam. Now, it is also dividing the Kurdish community in Germany -- a community that has recently taken to the streets to protest the tragedy unfolding in Kobani. The demonstrations have largely been peaceful, but there have been isolated cases of violence.

Researchers like Mouhanad Khorchide, an Austrian of Palestinian origin and Islamic theologian at Germany's University of Münster, have been trying to find an explanation. He believes that many Islamic State supporters in Germany have limited interest in Islamic issues. Instead, he argues, they view Salafism, a particularly reactionary movement within Sunni Islam, as a kind of counterculture. "Salafism is a product of modernity," Khorchide says. He describes it as being similar to radical youth movements seen in many other societies. Salafists, Khorchide explains, divide the world into good and evil, pious and non-believers. They offer orientation and cohesion to young people struggling to find a direction in life.

Those are exactly the kind of messages that seem to have lured Sedat Aras. During the 1970s, his father emigrated from Istanbul to Hamburg to take a job as a factory worker. Later, he founded his own construction firm. Sedat played football and also liked to party in the city's raucous St. Pauli district. He completed a vocational high school degree and had planned to study nutritional science. It seemed he had made all the right choices in life.

His sister Elif believes the death of their mother five years ago somehow threw Sedat off course. He had adored his mother and fell into a state of depression after she died of lung cancer. Then his relationship started to sour with his dad, who regularly lost large amounts of money on sports betting and became a problem drinker.

A Channel for Rebellion

Sedat sought refuge in religion. He grew a beard and swapped his brand-name clothing for the simple robes favored by Islamists. During dinner he would cite suras from the Koran. His father's lack of understanding and anger just further alienated him. Elif Aras believes radical Islam became a channel her brother could use to rebel against the family.

Sedat lived with his father, but he increasingly spent the night at the homes of acquaintances from Hamburg's Taqwa mosque, which the domestic intelligence agency considers to be a "central contact point" for Salafist jihadists.

During the summer of 2013, Elif made an attempt to draw her brother away from the Islamists' influence. She booked a flight for the two of them to Istanbul. A visit to friends in Turkey, she thought, might lead him to re-evaluate. The siblings stayed with relatives, took the ferry across the Bosporus and drank beer at bars on Taksim Square. After three weeks in Istanbul, Elif thought her brother had left Islamism behind.

Once back in Hamburg though, Sedat soon resumed contact with his friends at the Taqwa mosque. He even asked his sister to wear a headscarf. He retreated to his bedroom and spent days and nights surfing the web for photos and videos of jihadists in Syria and Iraq.

The Power of IS Propaganda

Islamic State celebrates its horrors on the Internet. IS fighters pose in front of mutilated bodies, they crucify their opponents and behead prisoners in front of video cameras. In Islamic State, admirers see a caliphate that is ferocious in its strength, a movement capable of challenging a global power like the United States.

Elif Aras is convinced it was Islamic State's digital propaganda that further radicalized her brother. At home, her father had often tried to emphasize the family's belonging to the Kurdish people. But Sedat didn't want to hear it. He saw himself as a true believer, a member of Allah's avant garde. At some point during the past year, he must have become convinced that, in the holy war against infidels, prayer alone wasn't enough.

At the Taqwa mosque, Sedat came into contact with other young men frustrated by their everyday lives in Germany who yearned for an adventure and admired Islamic State fighters. Relatives and friends of the Hamburg jihadists claim that a man with connections to the Taqwa mosque arranged their trip to Syria. The group traveled by bus to Vienna, where they caught a flight to Turkey.

For many European Islamic State fighters, Turkey is the gateway to Syria or Iraq. Traffickers pick them up at airports in Turkish cities like Gaziantep or Hatay and then sneak them across the border.

Sedat Aras kept his travel plans secret from his family. His sister first learned from acquaintances that her brother had joined Islamic State. The last message known to have been sent by Sedat was a text to a friend in which he wrote, "I'm going to paradise. I'm going to IS."

Distraught family members, like those of the young Kurd Sedat, often feel abandoned in their time of need or, worse, that people suspect that they share their relatives' ideologies.

Cansu Özdemir, a politician with the Left Party in the German port city of Hamburg, provides counseling to parents whose sons and daughters have veered into the Salafist scene. "Hamburg has ignored the problem for far too long," she says. Özdemir also argues that efforts by the German government to impose travel restrictions on young German Muslims suspected of trying to leave the country to join the jihad will do little to stop them. The real solution, she believes, is to provide early preventative support to vulnerable families.

Özdemir, the daughter of Kurdish immigrants from Turkey, has viewed with horror how Salafists have also successfully recruited Islamic State supporters among German Kurds. Barely a week goes by in which Özdemir doesn't receive calls from distressed parents who don't know what they can do to prevent their children's radicalization. But little is being done to help them. Currently, Bremen is the only city in northern Germany that has set up a counseling center for family members of religious extremists.

Thus far, the lion's share of the preventative work has been done by individuals -- activists like Özdemir or a man like Ismail Özen, a Kurdish-German boxer from Hamburg who is Germany's super middleweight champion.

Özen has a rap sheet, with a conviction for committing bodily harm. But now he has turned his energies toward fighting religious fanaticism. "I can't just look on as Islamists in my community recruit murderers," he says. In his effort to fight back, Özen invites young men to train at a boxing hall in Hamburg's Altona neighborhood. "Do you really want to sacrifice your life for a bearded caliph?" he asks them.

Over the summer Özen organized a trip for relatives of several Hamburg jihadists to Turkey. Despite Özen being a Kurd, Turkish families like the Güls joined him.

Murat Gül, 20, completed secondary school and had been searching for a position as a mechanic's apprentice. His bother Hasan says that Murat is religious but that he hadn't been radical. "He wasn't a fanatic," he says.

In Ankara, the families met with members of Turkish parliament and police officials. Murat's father even drove to Gaziantep on the Turkish-Syrian border to ask the mayor and the governor for help. Unfortunately, there's often little these officials can do other than to say that it is nearly impossible to get the young men back out once they have entered Syria or Iraq.

On a recent afternoon in late summer, Elif Aras was sitting in a cafe in Istanbul. She hasn't returned to Hamburg since her brother's disappearance. She was wearing black sunglasses to cover the dark rings under her eyes, an iPhone was sitting in front of her on the table. Aras says she hasn't given up hope that Sedat might still call her one day. "Every second, I keep thinking that he'll call and say, 'Elif, I made a terrible mistake. I'm sorry. I'm coming back.'"

Back in Hamburg, Hasan Gül is struggling with inner turmoil. On the one hand, he worries about his brother Murat and fears he might lose him. On the other, he doesn't know if he even wants him back. Hasan has watched violent Islamic State videos on the Internet. He starts to cry. He wonders if his brother has killed people andwhether he will continue killing if he comes back to Hamburg.

Hasan's voice falters and his hands begin to shake. He starts sobbing and asks, "Is my brother a monster?"

(*) The names of the jihadists and their relatives in this story have been changed in order to protect their identities.