Things have grown quiet in the largest city of the "caliphate," the man from Mosul says. He had spent some time on the outskirts of the city, at times traveling only by foot, in order to pass along details from inside the Islamic State (IS), as he had often done. "When the fighting in Fallujah was still going on, there were calls from the mosque loudspeakers at least five times a day for people to join the battle. The state would triumph, the men claimed. They said they had thousands of fighters there, tons of munitions and weapons and that Fallujah couldn't possibly fall. Ever since Fallujah did fall, there have been no more appeals."

At the end of June, the Iraqi army, together with Sunni tribal fighters and Shiite militia members, liberated the city near Baghdad from the Islamists. It was the greatest defeat yet for IS, which has been losing on all fronts for months.

In recent weeks, people have been attacked in Istanbul, Dhaka, Baghdad, Beirut, Nice, Ansbach and even in a regional train near Würzburg by perpetrators using bombs, automatic rifles and an ax. Indeed, this has made Islamic State appear to be stronger and more dangerous than ever before to people in the West, but the wave of terror has simply overlapped with events in the IS' core terrain.

The truth is that the pressure is mounting for the "caliphate," both in Syria and Iraq. An offensive against Mosul is imminent as Kurdish-led forces approach the IS' second stronghold, Raqqa. And in Libya, government troops are advancing in the direction of IS-held Sirte with air support from the United States. These could all be contributing factors behind the dramatic surge in the number of IS attacks recently.

The image that emerges from sources, who risk their lives to provide information from these regions, is one of a force in decline, wavering between retreat and delusion. People in various IS-held areas in Syria and Iraq uniformly report that the terror group still has a hold on the people living there. But given that control and fear are really the only instruments of dominance it has at its disposal, each subsequent military defeat represents an even tougher blow.

Graphic: Losing on all fronts

"The fighters appear frustrated and for the first time they look afraid," reports one man located in an area near the city of Hawija, which is located south of Kirkuk, Iraq. "Some are already sending their families to Mosul. Among locals who joined IS earlier, many are now saying they regret it, that they were deceived or forced to join. If only the government in Baghdad would promise them amnesty, they could find a way to the army's positions and avoid falling into the clutches of the murderous Shiite militias."

The very people who used their power as IS members during the time of the advance in 2014 to plunder the refrigerators and microwaves from the homes of neighbors who had fled have now become refugees themselves. "In Hawija, a Daeshi" -- as IS supporters are called in Arabic -- "offered a whole set of furniture on the market for $20, but it was surely worth $700," the local man explains. Some are trying to leave the "caliphate" entirely, he says, making their way north to the Kurdish regions. No one, though, is heading south. According to the man, the Shiite troops there will kill anyone who was with the Islamic State.

As the motley assortment of alliances between Kurdish and Shiite militias, the Iraqi army and the US Air Force recaptures one IS-held area after another, Islamic State's omnipresent Hisba religious police are growing increasingly delusional in their efforts to maintain control. Smoking and music had long been forbidden, and woman had only been able to leave home wearing a niqab, or full face veil, and accompanied by their husband or a male relative. Now the Islamists have even prohibited people from wearing red clothing.

"Red is a celebratory color, they say, and thus forbidden," the Mosul resident says. "And in math class at schools, the plus sign is no longer allowed to be used. It's the Christian cross, they say. Now they have to write: '1 added to 1, God willing, equals 2.' Those using the old character risk punishment. T-shirts or flags that bear a cross anywhere -- the FC Barcelona emblem, for example -- are now strictly prohibited."

These measures appear to be bizarre attempts to maintain control within IS-ruled territory, even as that control dwindles due to military pressure from without. The fact is, Islamic State's power is waning and overzealous regulations won't help -- at most they can give the impression that the group remains strong.

Blanket, uninterrupted surveillance has long been a central source of IS' power, helping it to conquer and maintain control of vast territory. In the beginning, its fighters would extensively surveil every area that IS wanted to capture. Then they would deceive the people there about their identity and true intentions. Finally, they would crush any resistance with demonstrative, merciless cruelty.

Religion has always served the Islamic State as a propagandistic means to an end. IS leaders used Islam to attract jihadists from Chechnya or Tunisia as well as to justify its tyranny inside the areas it controls. But the system, largely copied from Saddam Hussein, only works if those with power are able to continue exercising it.

But the Islamists' power is eroding at the moment, and it's plain for anyone to see. As soon as IS loses control of an area, residents no longer have to remain loyal to the group. If they were truly convinced, if they actually believed in the "caliphate," then the Islamic State could continue to exist there as a kind of phantom power.

In Afghanistan, for example, the Taliban's resurgence is attributable to the fact that its ideology outlasted its period of rule. Once conditions became favorable for the Taliban again -- in this case through a corrupt government that was defended by foreign troops -- they were able to return. For the same reason, al-Qaida in Yemen has always made sure not to turn the local population against it. This may have hindered swift conquests, but it also prevented the conquered from being disappointed later on.

Fighters with the Islamic State in Deir al-Zor, Syria: The terrorist organization has few supporters remaining of their own volition.

Islamic State, on the other hand, has never waited for the approval of locals. If it had tried to win hearts and minds rather than just overrun villages, it wouldn't have grown as rapidly as it did in the early stages until fall 2014. But that brutal strategy is now coming back to roost.

There is no city or village in Syria or Iraq where a majority of the population is enthusiastic about the Islamic State, according to some who have fled as well as informants on the ground. Blood donations for injured fighters, for example, had to be collected by force.

Most normal residents are simply trying to stay out of the way and survive. They are afraid, plus they assume IS will disappear in the long run anyway. Local leaders and presumably many foreign jihadists remain loyal to IS leader Abu Bakr al-Baghdadi, but there are otherwise few who continue to support the Islamic State of their own volition. Winning over local populations was never part of IS' plan.

Against that backdrop, liberated areas in northern Syria have seen women in particular celebrate their newly won freedom in more radical ways than one might expect in their conservative surroundings. The image of 19-year-old Souad Hamidi, who beamed as she tore off her niqab, went around the world. "Look at what we're wearing," one woman shouts in a video. "Thank you for liberating us. Thank you that I can wear red! I will always wear red!"

Hairdressers with nothing to do for the past year or two were euphoric about the sudden flood of customers. The men wished to shave off their beards. They wanted trendy haircuts, cropped short and gelled; away with the obligatory shag of IS times. Men could be seen playing cards and backgammon on the streets again, demonstratively smoking.

Still, Islamic State has by no means disappeared. As long as the murderous air strikes by Syrian and Russian jets continue, and Sunnis continue to live in mortal fear of Shiites, IS could still return even after a total loss of its "caliphate."

The terrorist organization had been almost entirely defeated in Iraq once already. It went underground in 2008 and had been forgotten almost entirely by the time it suddenly resurrected itself in 2012, more dangerous than ever before. For the IS propaganda apparatus, this now serves as proof of its own invincibility. "Were we defeated when we lost the cities in Iraq and were in the desert without any city or land?" Islamic State spokesman Abu Mohammed al-Adnani recently asked in an incendiary speech. "And would we be defeated, and you victorious, if you took Mosul or Sirte or Raqqa? Certainly not!"

The Islamic State was able to regain its strength four years ago because Saddam Hussein's former intelligence officers had joined forces with the Islamists -- war professionals who rose quickly, developed a long-term strategy and shaped its tactics. IS also exploited the circumstances, including a war in Syria and politics of sectarian discrimination in Iraq that excluded Sunnis from power and public offices.

The tragedy of the Washington-led battle against IS now is the fact that it is so shortsighted in its focus on military strikes. The coalition is ignoring the underlying conditions that could make a return of the Islamic State possible later.

Only days before diplomats from dozens of countries pledged to intensify the fight against IS at a meeting in Washington in early July, US Secretary of State John Kerry flew to Moscow. His suitcase was full of concessions the US was prepared to make to Russia that would allow the regime of Syrian dictator Bashar Assad to remain in power, at least for now.

The problem is that as long as Assad continues to rule, the rebellion against him will not end. Assad's presence will hinder any true agreement with the various opposition factions in the country -- and that's the kind of unity necessary to banish the Islamic State.

Instead, the US allows itself to be taken advantage of, time and again, by groups that are also using the fight against the Islamists for their own purposes. On July 19, American bombs killed more than 50 civilians in the northern Syrian city of Manbij, which is under IS control. The Americans had obtained the target coordinates from the Kurdish-led SDF militia, which in addition to fighting IS, is trying to drive Arabs out of the areas located between its Kurdish strongholds.

Even today, Washington's anti-terror strategists still haven't come to understand the inner-workings of the Islamic State. Indeed, many still consider it to be strong even at its weakest points. "Where al-Qaida was hierarchical and somewhat controlled, these guys are not," former CIA chief Michael Hayden recently told the Washington Post. "They have all the energy and unpredictability of a populist movement." That, however, is precisely what they do not have. Iraqi special forces in liberated Fallujah at the end of June 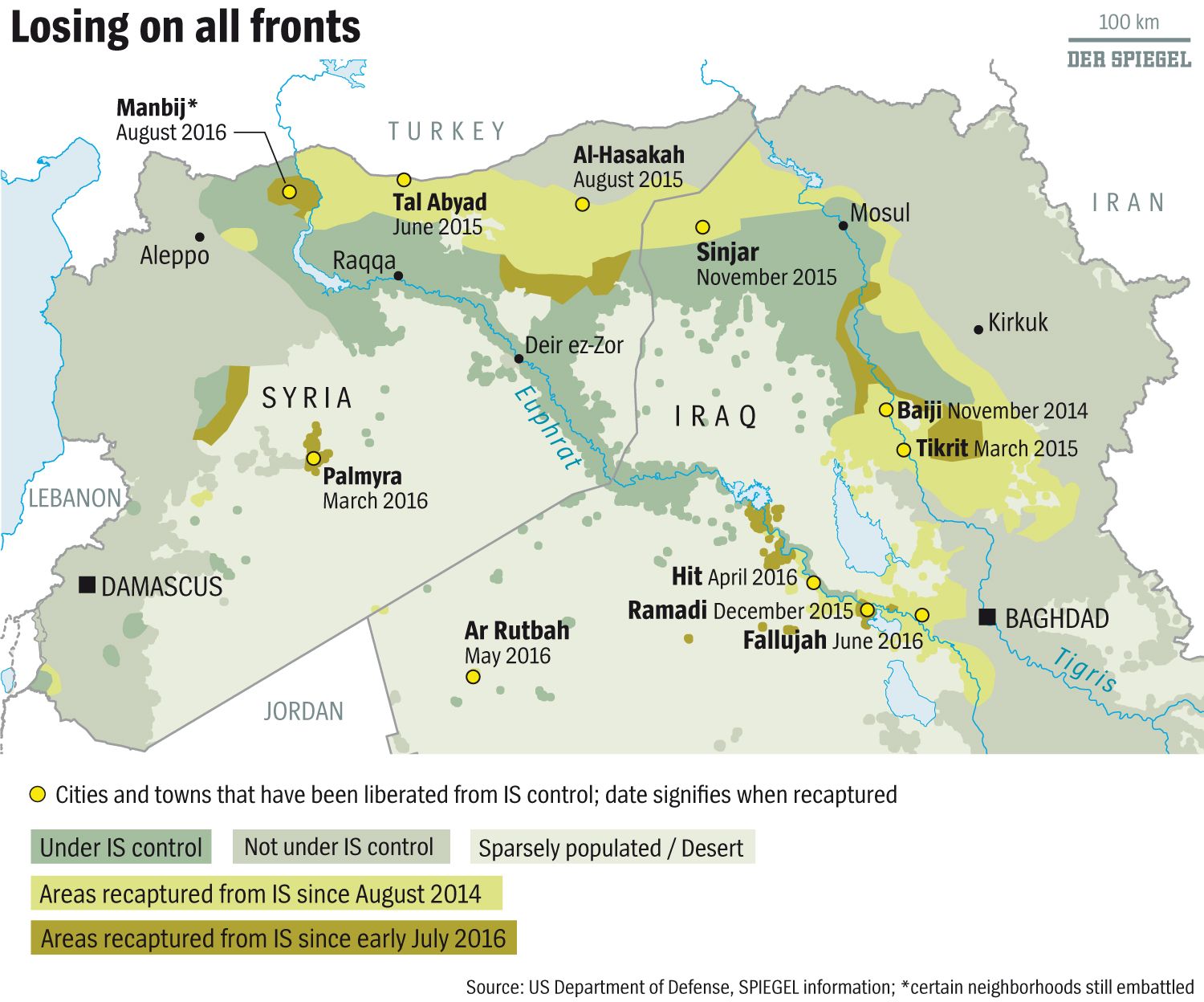 Graphic: Losing on all fronts 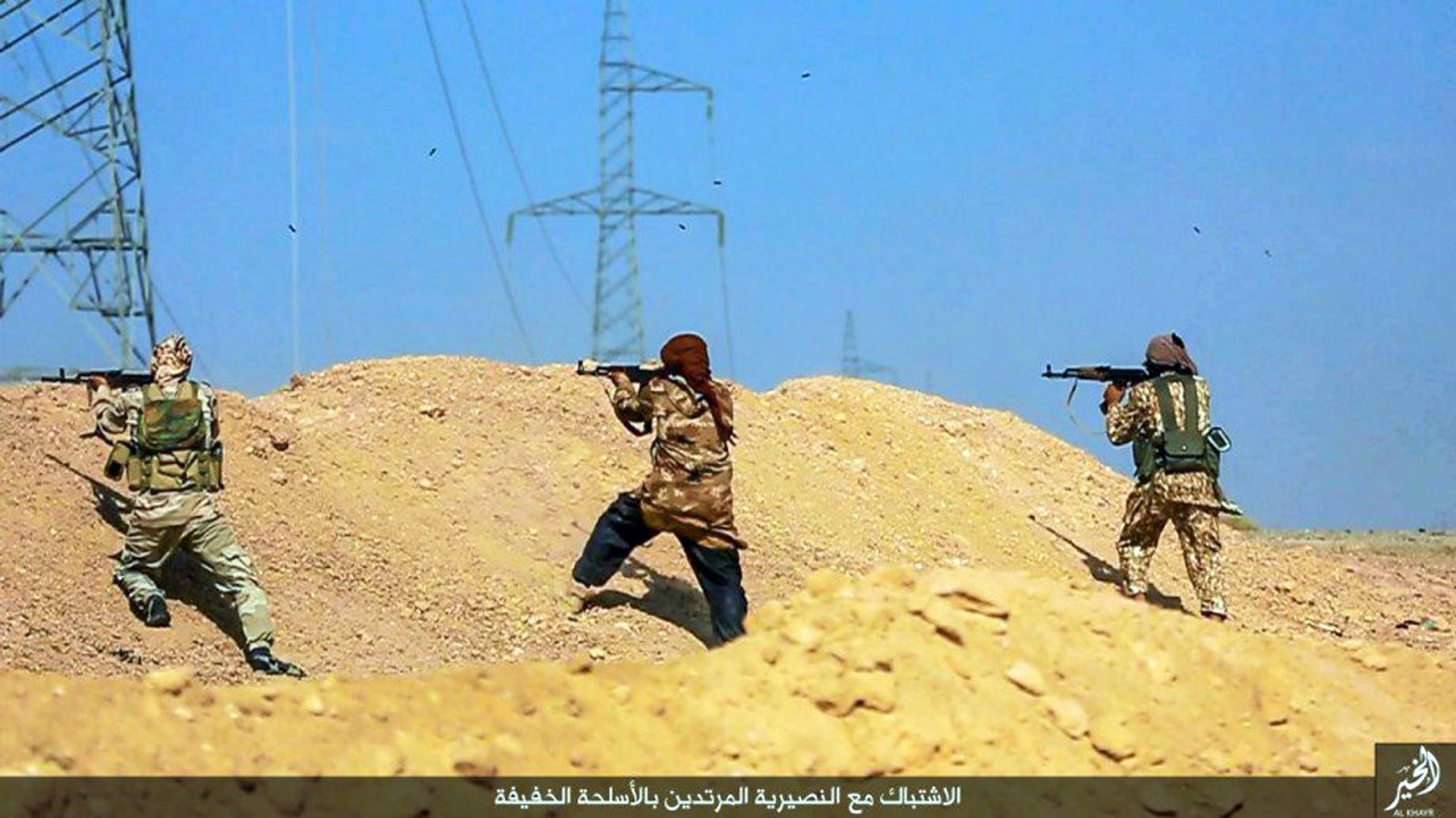 Fighters with the Islamic State in Deir al-Zor, Syria: The terrorist organization has few supporters remaining of their own volition.