No terror organization uses the Internet as successfully when it comes to marketing itself and recruiting supporters as Islamic State (IS) does. But how is it able to do so given that the group operates in a region where telecommunications infrastructure has been largely destroyed?

The answer to this question is an extremely problematic one for Europe, for it is European companies that provide the terrorists with access to the platforms they use to spread their propaganda. It remains unclear whether the companies knowingly do so, but documents obtained by SPIEGEL ONLINE show that they may very well know what's going on. And the documents show that the companies could immediately cut off Islamic State's Internet access without much effort.

If you need to get online in Syria or Iraq, the technology needed to do so can be purchased in the Hatay province -- a corner of Turkey located between the Mediterranean Sea and the Syrian border. In the bazaar quarter of the regional capital of Antakya, peddlers hawk everything from brooms and spices to pomegranates, wedding dresses, ovens, beds and all kinds of electronics. Antakya has served as a crossroads for numerous trade routes for thousands of years. Wares continue to flow through the region's relatively porous borders even today.

Thousands of dishes have been installed in the region allowing users to access the Internet by satellite. There has been a huge surge in recent years in the satellite Internet business. Instead of the usual landline cable connection, all one needs is a satellite dish with a transmission and reception antenna and a modem. The result is top-speed Internet access, with downloads at a rate of 22 Megabits per second and uploads of 6 Megabits.

Accessing the Internet by satellite is easy, but it isn't cheap. The equipment needed costs around $500 in Syria right now. On top of that are the fees charged by Internet service providers, which run at about $500 for six months for a small data package and customer service provided by email.

The technology is a blessing for people who live in rural areas lacking infrastructure. It enables them to maintain contact with friends, family and the rest of the world using email, Facebook or Instagram. It also provides them with access to all the entertainment and information services. For members of the political opposition and activists in non-democratic countries, the Internet is the most important means of communication. Aid organizations also use satellite-based Internet access to coordinate their work.

The problem is that terrorist organizations also rely on the technology, which allows them to connect from even the most remote, infrastructure-barren regions, providing them with the means they need to upload their propaganda, exchange information and possibly even plan attacks.

In Antakya, the demand for satellite technology on the other side of the border has fueled a boom in business. Two of the numerous dealers based here say independently of each other that they each have about 2,500 users in Syria and that they have monthly revenues of around $100,000. When asked who, specifically, they are selling their equipment and services to, they cautiously answer that they provide them only to commercial partners. They say they don't know who the end customers are.

That's not implausible. In theory, anyone with the money can buy and install a satellite dish for Internet access. But in regions ruled by Islamic State, IS exerts extensive control over Internet access. Syrian media activists with Aleppo24 and Deirezzor24 tell SPIEGEL ONLINE that in cities with stronger IS presences, like Raqqa or Deir-al-Zor, only technicians affiliated with the terrorist militia are permitted to install satellite dishes.

Local IS leaders, known as emirs, decide whether private individuals are allowed to have Internet access. In some regions, they have cut the area off entirely, whereas in others, access is given to currency-exchange stands, at Internet cafés or even in the form of neighborhood Wi-Fi networks. But no Internet access is possible without the Islamic State's permission.

Syrian activists claim that satellite dishes are located all over the place -- on the rooftops of IS media centers and on top of the private homes of members of the terrorist militia. Without them, IS would be cut off from the outside world.

Most of the satellite dishes going to the Middle East make their way through Rotterdam, the world's third-largest port. It's here, among the 12 million containers processed annually, that the satellite technology and modems arrive in Europe. Most of the manufacturers are located in the Far East, with their customers based in Paris, London or Luxembourg.

A number of distribution firms are involved in the sales chain of the technologies required to obtain satellite Internet access. At the beginning of this chain are the major European satellite operators, led by France's Eutelsat, Great Britain's Avanti Communications and Luxembourg's SES. Among the most popular brands are Hughes by Avanti and, especially, Tooway by Eutelsat. The French company has been in business for years and offers almost complete global coverage with its satellites.

Distribution firms then buy facilities and satellite capacity from the big companies and resell it to corporate or private customers. They also work together with additional companies like the German firm Sat Internet Services based in the northern city of Neustadt am Rübenberge.

It's a lucrative business for company CEO Victor Kühne, who expanded distribution to Turkey a few years ago. His problem is: the market for satellite Internet technology is limited in the European Union because of near blanket coverage of standard broadband Internet connections on the continent. Sales in Turkey are fairly slow too, because satellite connections are more expensive than classic DSL access.

The satellite operators don't provide data on the number of customers they have, but there is anecdotal evidence. In Turkey, for example, those seeking to access the Internet using a satellite dish are required to register with the government's BTK telecommunications authority. According to the most recent data available from the agency, there were 11,000 registered satellite Internet users in Turkey during the first quarter of 2015, only 500 more than the previous year.

But during 2013 and 2014, alone, Neustadt-based Sat Internet Services exported more than 6,000 dishes to Turkey, customs agency documents obtained by SPIEGEL ONLINE show. It is likely that most of those satellite dishes did not remain in Turkey, and there's a strong chance a good deal of them ended up in Syria. The Syrian market has a decisive advantage in that there is no alternative Internet access available, meaning prices can be set very high.

It's unlikely that any of these companies are deliberately trying to help or support the Islamic State, and it is also unclear if they really know who their equipment is ultimately delivered to. One source who has observed sales in Antakya describes some of the transactions, saying that bearded men often visit the stores in the city, wearing only flip-flops. They pull bundles of cash from their pant pockets and order dozens of satellite dishes at a time -- often also buying radio communication devices with a range of several Kilometers.

Is this evidence that the Islamic State uses middlemen to purchase satellite equipment in Turkey?

SPIEGEL ONLINE solicited comment from all the companies concerned, with only SES and Eutelsat providing responses. Officials with Luxembourg-based SES said they only sell their services to major dealers who have been reviewed and that they do not sell to end customers. SES officials say they have no knowledge of users in areas of Syria controlled by Islamic State. The company says that if it were to find this to be the case, it would use all means at its disposal to immediately stop access.

Officials at France's Eutelsat offered more reserved comments, saying that modern satellite terminals are very small, compact and mobile and that they could thus not rule out any possible illicit use. Eutelsat officials say the company has none of its own service providers in Syria and that it has no direct contact with end customers. Avanti's German lawyers issued vague warnings but said little about the content of the story and said they could not be quoted. But it doesn't appear that their practices are different from SES and Eutelsat.

Surely some information gets lost in the long distribution chain. When a dealer in Antakya or in a Syrian city like Aleppo makes a sale, it's not possible to determine which company exported the goods from Europe to Turkey, the companies say.

But is that true? Satellite operators and their distribution partners generally can determine the location of the equipment they are supplying. When they install satellite dishes and configure Internet access, their customers are required to provide their GPS coordinates. If the wrong information is provided, then customers are either unable to access the Internet or they end up with poor connections, the documents show. GPS data obtained by SPIEGEL ONLINE from 2014 and 2015 clearly indicate that satellite dishes were in fact located in precisely the places that are under Islamic State control.

Many of the satellite dishes are located in Aleppo, Syria's second city, which isn't completely under the control of the terror regime, but other locations of the dishes include Raqqa, the unofficial IS headquarters, al-Bab, Deir al-Zor and along the Euphrates River into Iraq and the IS-occupied city of Mosul.

Why Don't Companies Take Action to Stop It?

Given the high investments costs of the required infrastructure, the general business practice of the satellite operators is to gain as many customers as quickly as possible. Although most satellite operators do not publish their internal figures, industry analysts say it costs between €300 million and €400 million to build a satellite and to launch it into orbit. Costs associated with operating a satellite must also be factored in. There's an additional aspect as well: The average operating life of a satellite is only 15 years, meaning that the investment must be recouped as quickly as possible.

Does that explain why satellite operators might be willing to accept the fact that they provide the infrastructure needed by a terrorist group to communicate, disseminate their propaganda and possibly plan attacks? For the satellite operators, it's technically relatively easy to cut access to networks. Using the web portal OSS, it only takes one click to eliminate access. In cases where they harbor suspicions, operators would also have the technical ability to see what kind of data is be transmitted or received by the satellite dishes.

It may be true that the companies simply want to used their technology to increase the reach of television stations -- in the way recently described by Eutelsat CEO Michel de Rosen as he presented an award sponsored by his company to SPIEGEL TV (ironically enough for a documentary film about the Islamic State). Or perhaps the companies simply want to pursue their business goals without checking precisely to see who is profiting from the services they provide.

That would mean that intelligence services have been listening in for years, even as IS continued growing in strength. It wouldn't be difficult for intelligence services to tap the connections either, given that the ground stations used to feed the satellite signals into the cable networks are also located in European countries, including Cyprus (Avanti) and Italy (Eutelsat).

Possible connections linking Eutelsat with Syria could be particularly uncomfortable for the French government, which indirectly holds a 26-percent share in the satellite operator through the state-owned Bank Caisse des Dépôts. 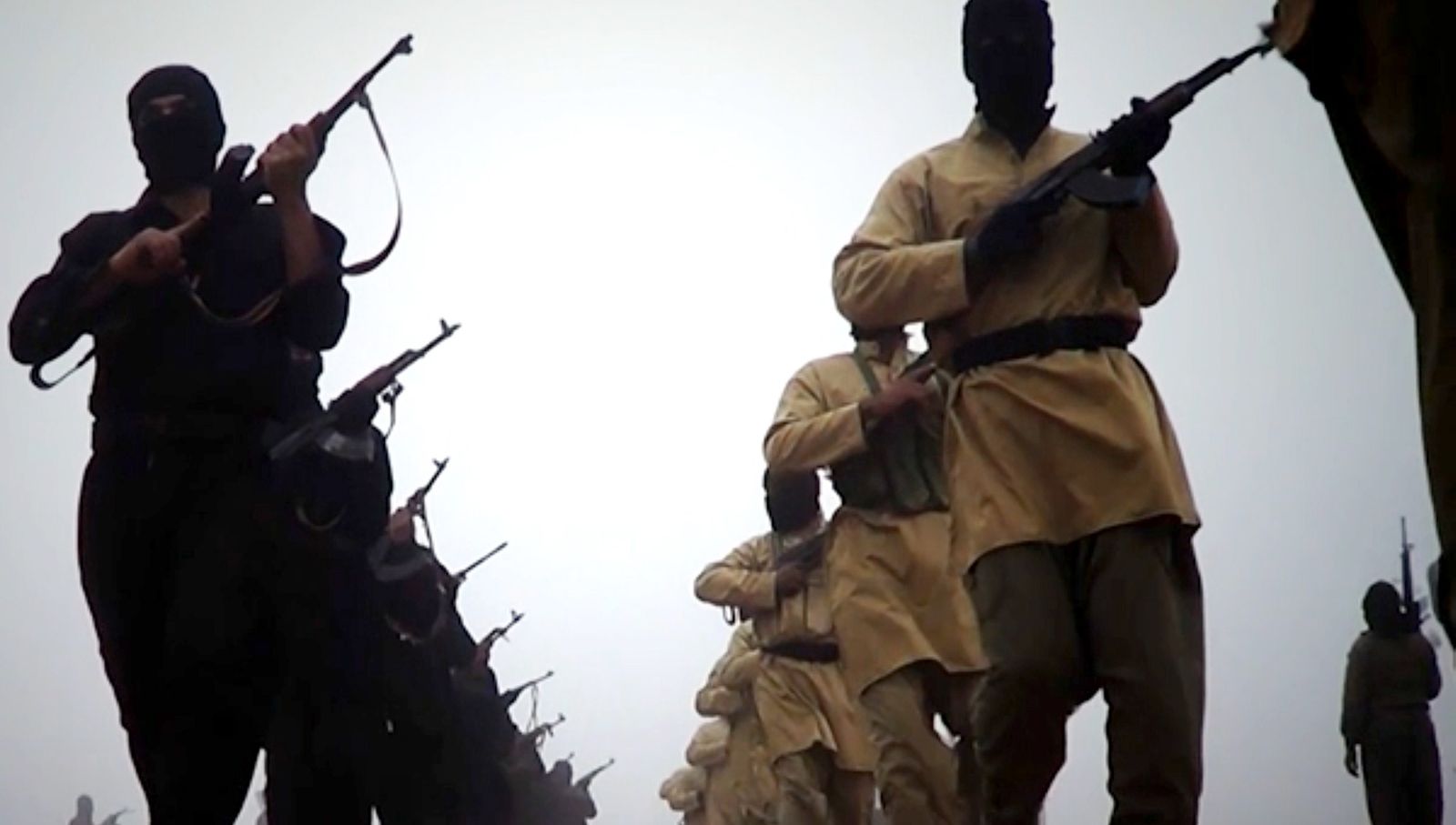