The message was clear: Every Muslim must aid the uprising against the Syrian government "with everything that he has -- his life, money, views and information." The current leader of the terror network al-Qaida, Ayman al-Zawahiri, called on believers to bear arms and go to Syria in an eight-minute video that was posted over the weekend on extremist websites. Rebellion against the "anti-Islamic regime" in Damascus is a religious obligation, he declared.

For their campaign against Bashar Assad's "pernicious, cancerous regime," the brothers in God should build on their willingness to make sacrifices and on their steadfastness. The al-Qaida leader especially called on Sunni Muslims in Lebanon, Turkey, Jordan and Iraq to rush to the aid of the opposition in their neighboring country.

The fiery call to action from Zawahiri, who succeeded Osama bin Laden at the top of al-Qaida, has fueled the ongoing speculation over the presence of foreign, or even al-Qaida fighters in Syria. The regime in Damascus has long maintained that the 11-month-old uprising in the country was being waged by "foreigners," "terrorists" and "armed bands." The Syrian National Council, an opposition coalition, and the Free Syrian Army (FSA), the umbrella organization of the armed resistance, spurn that notion, and argue that the rebellion in Syria is a popular uprising of Syrian citizens who are fighting for their freedom and for democracy.

But, despite the protestations from the Syrian opposition, rumors are growing over the deployment of foreign jihadists in Syria. One source in Beirut, who was outside of Homs in recent weeks with the opposition FSA, reported seeing "hundreds of foreign fighters," who have attached themselves to the FSA, which is made up largely of deserters from the Syrian military. The Sunni volunteers came primarily from Iraq and Lebanon, with a few from Saudi Arabia, the source said.

Some observers viewed the two bombings in the Syrian city of Aleppo last Friday as proof that extremist terrorist groups are operating in the country. Twenty-eight people were killed in the attacks on the Military Intelligence building and on a police headquarters building. In American news reports over the weekend, US officials speculated that al-Qaida was behind the attacks.

The news website McClatchy referred to several officials in the US government who consider al-Qaida in Iraq responsible for the car bombs. And two suicide bombings, which on Dec. 23 and Jan. 6, killed up to 70 people, are also thought to have been organized by the Iraqi al-Qaida cell.

Experts believe that it may very well be in al-Qaida's interest to involve itself in the conflict in Syria. "Al-Qaida has a PR problem," says Wolfgang Mühlberger, of the National Defense Academy in Vienna. "It could be good for them if they tried, through an engagement in Syria, to make themselves attractive again to certain target groups." But one has to be careful, he says, because not every jihadist is part of al-Qaida. "In the case of Aleppo, there was no claim of responsibility, and the organization usually does that," he said.

Iraq's Deputy Interior Minister Adnan al-Assadi confirmed over the weekend that weapons are being smuggled from Iraq into Syria. "The weapons are being brought from Mosul through the Rabia crossing to Syria, because members of the same families live on both sides of the border," he told the news agency Agence France Presse (AFP).

Should evidence mount in the coming weeks that foreign fighters are taking part in the Syrian uprising, or are even monopolizing it, it would be catastrophic for the true opposition in the country. They have pinned all of their hopes on help from outside, on diplomatic pressure that the world community can put on the regime, and on financial aid and maybe even weapons transfers, with which Arab supporters might be able to help them.

But should the suspicions be confirmed that the Syrian uprising has been infiltrated by unknown, uncontrollable extremists, the willingness of the world to help would surely dramatically decrease. The volunteers from other countries could therefore unwittingly deal a death blow to the Syrian revolution. 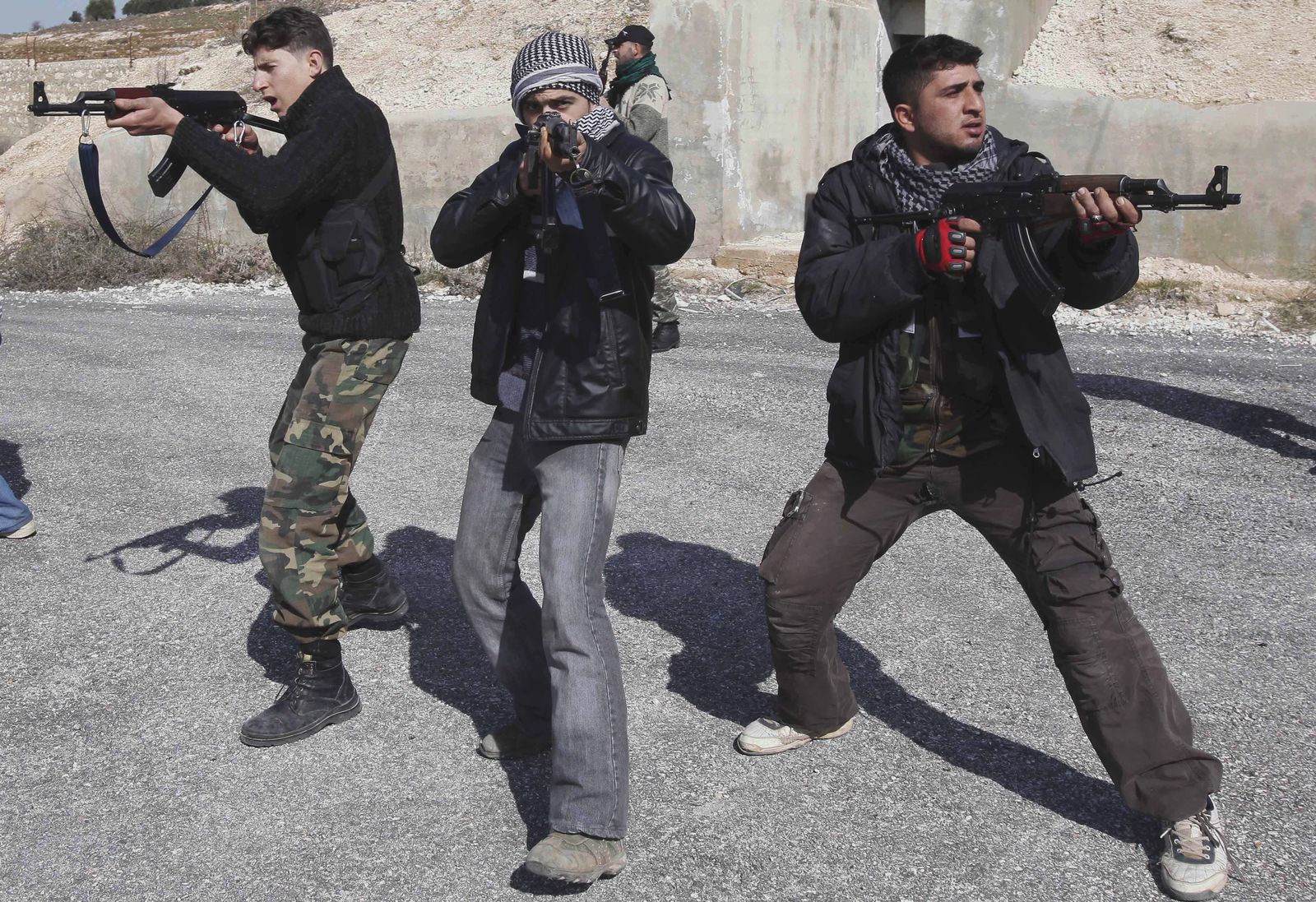 Syrian rebels train outside of Idlib. How significant is the danger of infiltration?