The defeat was celebrated as if it had been a victory. The chief minister of the North-West Frontier Province greeted a delegation from the local Taliban. The Taliban officials, with their long beards and turbans, had come to the chief minister's house to sign a treaty. After arriving in pickups and large limousines, the men were seated on velvet armchairs and served food on silver trays.

Then the pious foes of the government in Islamabad were given a coveted piece of Pakistan as a gift.

Under the agreement, which the men and the governor signed with much ceremony, the Taliban will be permitted to implement their interpretation of Islamic law, or Sharia, in the Swat Valley and other adjacent districts at the foot of the Hindu Kush mountain range. "Today is a historic day," said Amir Haider Khan Hoti, the chief minister of the provincial government, clearly straining to put a positive spin on the Taliban's assumption of power. "An old demand of the people has been met. The new regulation will provide a more efficient legal system."

It was a blatant lie. Most Pakistanis are shocked by the prospect that, in the Swat Valley, thieves could have their hands cut off and adulterers could face stoning in the future. Such punishments were in fact already possible under Pakistani law, but have never been carried out in the past.

The Swat Valley in the Malakand region, with its sunny ski slopes and elegant resort hotels, was once one of Pakistan's biggest tourist attractions. The vast sky is almost always a clear blue, and the icy slopes seem close enough to touch. Swat, only about 250 kilometers (156 miles) north of the capital Islamabad, was a haven for wealthy city residents, who came here to enjoy the fresh, clean air or hike along mountain brooks and through apricot groves.

The valley's residents have little in common with the bigoted Taliban. Only last year, local citizens voted the Islamists out of office and gave the overwhelming majority of their votes to the semi-secular, liberal Awami National Party. But then they were again left with the Taliban, with the consent of the army and Pakistani President Asif Ali Zardari.

The news of the radical Islamists' takeover of the Swat Valley was just as alarming to the rest of the world as it was to many in Pakistan. Richard Holbrooke, the US's new special envoy for the region, was in India, having just left Pakistan after completing his first official visit to the country, when he received the "horrifying" news. According to Holbrooke, the Taliban victory shows that India, Pakistan and the United States face a common enemy "that poses direct threats to our leaderships, our capitals and our people." In the wake of its growing successes in putting pressure on American and NATO troops in Afghanistan, the Taliban must now feel that repression and terror against ordinary people and army personnel in Pakistan will lead to further gains.

This week, the chief of Pakistan's army, Ashfaq Parvez Kayani, and Pakistani Foreign Minister Shah Mehmood Qureshi are meeting with US officials in Washington as part of talks which will inform a review of US policy in Afghanistan, in which the situation in Pakistan plays a key role.

In Islamabad, President Zardari sought to downplay the defeat, noting that the agreement with the radicals requires them to lay down their weapons. But hardly anyone believes this. Even government officials in the affected region admit that "the Taliban are using the truce to rearm." Taliban militants announced Tuesday they had indefinitely extended the cease-fire in the Swat Valley which was due to expire on Wednesday, allowing more time for peace talks with the government. But a Mingora resident suspects that this is only in order to avoid their troops being disarmed.

In effect, Pakistan, a nuclear power, has relinquished its sovereignty over an important part of the country.

The once-idyllic Swat Valley has been in a state of war since 2007. The military sent a total of 12,000 troops to the region in an attempt to curb the influence of the extremists, who have beheaded 70 policemen, banned girls' education and destroyed hundred of schools in the valley.

The clashes resulted in a great deal of bloodshed, including the deaths of at least 1,200 civilians and 180 Pakistani soldiers. But the outcome of these military operations was fatal for the government. Today, the Taliban control more than 80 percent of the Malakand region, compared with only a handful of villages a year ago.

Civilians found themselves caught between the combatants. "The army ordered us to leave the village ahead of the fighting, but the Taliban forced us to stay there," a frantic hotel owner reports by telephone from a village near Malam Jabba, once a popular ski resort. Like the region's 10,000 other refugees, he has found temporary shelter with relatives, but plans to leave the area as soon as possible. According to the hotel owner, more and more Swat residents are submitting to the Taliban in an effort to survive.

Many even claim that the military has deliberately spared the Taliban leadership to avoid provoking further Taliban animosity against itself and the government. Others believe that the security forces were just too weak to defeat the 3,000 armed extremists. Both views are probably correct. The militants installed their regime in the mountainous tribal areas after being ousted from Afghanistan in 2001. Now their power is starting to spill over into Pakistan's heartland, which includes the Swat Valley.

After the sun has set in the Swat Valley, small groups of men furtively enter the house of Khalil Mullah. The visitors are Taliban spies, and they have come to report to Khalil -- whose name means "friend" in Arabic -- about who has broken the laws of Allah in the region they control. They will report who has been seen dancing exuberantly, had his beard shaved, committed adultery or expressed sympathy for the government in Islamabad -- in short, who is a traitor.

Khalil Mullah begins his daily radio show on FM 91, a Taliban radio station, at about 8 p.m. The residents of the snow-covered plateau listen to Khalil's religious broadcast to hear the names he reads at the end. Acting as both judge and prosecutor, he announces the names of those required to appear before the Taliban's Sharia count -- and of those who have already been sentenced. 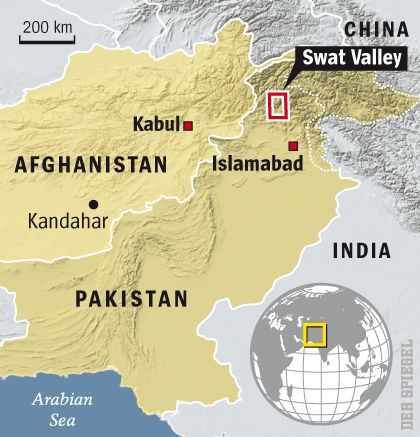 The bodies of these unfortunate residents can be found the next morning on the market square in Mingora. The corpses are hanging by their legs, their heads cut off and placed onto the soles of their feet as a final form of disgrace for the dead. A note under each body reads: "The same penalty will await those who dare to remove or bury these spies and traitors."

The extremists are led by Maulana Fazlullah, 33, a self-proclaimed cleric who once worked as a laborer on a ski lift. The people of Malakand call him simply the "radio mullah." It was Fazlullah who first took his terrorist network to the airwaves.

In his broadcasts, he promised more efficiency and justice to citizens disappointed by the corrupt and lethargic Pakistani authorities. But the station quickly turned into a parallel government of sorts. In each day's broadcast, Fazlullah's holy warriors issue new rules that reflect their own interpretation of Sharia. Women are already banned from visiting markets, under penalty of death, and girls prohibited from attending school. Police officers who obey orders from Islamabad risk having their ears cut off or being killed. Some 800 policemen have already deserted their posts to join the Taliban.

The death lists draw no class distinctions and include people from all walks of life. The Taliban's victims range from barbers and teachers to tribal elders, ministers and more liberal clerics who oppose Fazlullah.

Politicians in Islamabad had long deluded themselves over how much power the Pakistani Taliban had already attained. In a recent interview with the American CBS television network, Zardari admitted that he had been misled about the scope of the problems in the north. "Everybody was in denial that they're weak and they won't be able to take over -- that they won't be able to give us a challenge," he told the station.

Zardari's bitter realization is consistent with the picture that Mike McConnell, the former director of the US National Security Agency (NSA), formed when he visited Pakistan. He met several times with the military leadership in Islamabad last year. During one of these meetings, a Pakistani two-star general told him why the army, which has always been the dominant political power in Pakistan, complies with the politicians' demands to fight the Taliban while at the same time secretly supporting the group.

The officers do not expect the United States to remain in Afghanistan in the long term. They fear that India will advance into the power vacuum that will be left behind when American troops withdraw. For this reason, the Pakistanis are unwilling to give up their ties to the Afghan opposition, the Taliban. In a recently published book on the foreign policy challenges President Barack Obama has inherited, New York Times author David Sanger quotes the Pakistani two-star general as saying: "We must support the Taliban."

Pakistan's military remains more concerned about a conflict with India than about Islamist terror at home. As a result, it accepts Talibanization as a necessary evil, allowing, for example, such changes as women no longer being accepted as customers in restaurants or tailors' shops -- even in Lahore, a liberal major city home to many intellectuals. "The influence of the extremists is being ignored and it's spreading like a virus," observes Gregor Enste, director of the Heinrich Boell Foundation in Lahore.

Despite the imposition of Sharia law, many citizens of the Swat Valley town of Mingora celebrated in the streets and gave each other gifts of sweets. After the bloodshed of recent months, they were pleased to see peace restored to the region, under almost any circumstances.

The Taliban's chief negotiator, 77-year-old Islamist Sufi Mohammed, is the father-in-law of Maulana Fazlullah, Swat's brutal new ruler. Sufi Mohammed has now begun traveling through the villages with his so-called peace caravan to celebrate the triumph of Sharia over secular law. The government in Islamabad hopes that the somewhat more restrained father-in-law will exert a moderating influence on the power-hungry Fazlullah.

But there is little reason to be too hopeful. Like all Islamists, Sufi Mohammed is also an unbending enemy of democracy, which he has always seen as a system "that was forced upon us by the infidels." During his tour through the Swat Valley, he explains again and again: "True Islam permits neither elections nor democracy."

With reporting by Zulfiqar Ali in Peshawar and Sayed Irfan Raza in Islamabad.