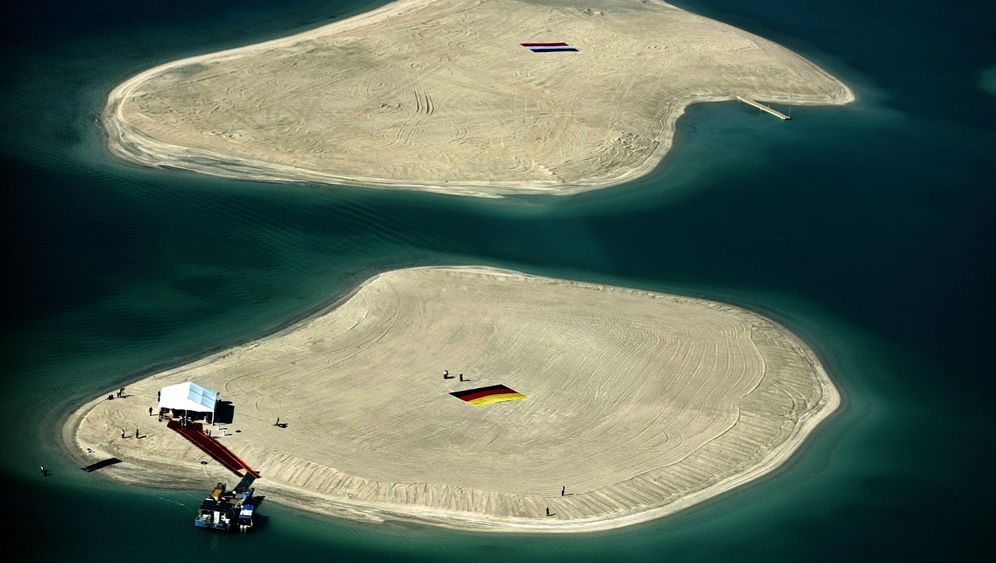 When Josef Kleindienst was still a farmer's boy at home in Schrattenberg in Lower Austria, he read Goethe's Faust. And when he left the farm and became a police officer in the city, he still loved Faust. He even loved the sequel, the dense verse play with the "clash of the spades" and the "free ground to build on."

Josef Kleindienst says: "What fascinated me with Faust was the notion that things have to always go on, otherwise they get rusty."

Today, Josef Kleindienst is €200 million richer and far from Schrattenberg, on his own building plot covered in grey, shell-flecked sand. It's a deserted piece of property in the steaming water of the Persian Gulf, and Kleindienst calls it "Germany." Now a real estate broker, he bought the island outside Dubai together with "Austria," "St. Petersburg," "Sweden," "Switzerland," and "the Netherlands," which is destined to become a party island.

"It will be connected with Germany by a floating bridge. In Austria we will build a Sisi-themed hotel for romantic weddings," Kleindienst says. "Sisi" is the nickname for Elisabeth of Bavaria, an Austro-Hungarian ruler from the 19th century.

Germany, the island, is 1,400 meters (or less than a mile) long, and 800 meters wide. It has no vegetation. But it's covered in tire marks and inhabited by bulldozers, cranes and other construction equipment.

The Clash of Spades

The islands belong to a larger project called "The World," a world map comprised of 300 small islands organized by the real estate firm Nakheel. Filling up the Gulf with these islands contributed in no small part to the financial difficulties of the development firm last year -- and it helped extinguish the fairy tale of Dubai as the city of the future.

"The speculation bubble burst," Kleindienst admits. "Today, rents are regulated and fixed. No one now will get rich in the Gulf from real estate alone. A developer has to make sure his buildings don't sit empty."

Therefore, "Germany." The island is meant to be the vanguard -- proof that even in Dubai, one can still earn money building on sand. Never mind if the rest of "The World" sits fallow. Isolationism is possible here -- Kleindienst's "Heart of Europe" needs no international community. "We can live without the neighbors," he says.

Kleindienst is a tall, 46-year-old man whose heritage is more obvious than the money he made during the Dubai boom. As a police man at home, he wrote a book which caused some trouble for his onetime political colleague, Jörg Haider. But that was a long time ago.

Now Kleindienst has an Austria of his own. Germany lies in the Gulf like a mirage; but Kleindienst can see it clearly. Over the next few days the first native settlers of Germany will move in -- construction workers from the south of India who will live in containers planting palm trees, laying down the foundations for future houses and building walls.

"The clash of the spades: how it delights my heart!" read the relevant lines in Faust II. "These are my many workmen; here they toil, / The alienated earth to reconcile, / To keep the ocean and the land apart, / to rule the unruly waves once more."

Due to the heat, construction will occur at night.

"Most of the 18 minimalist villas will have their own beach and footbridge," says a flier for The World. "All will have a pool. The building ground is now dense enough and approved by the authorities."

The first 12 are already sold, Kleindienst says, for about €3 million each. Well, what do people want? The sea, of course, and they prefer to enjoy it in peace and quiet.

Kleindienst says a businessman from Hamburg has invested in "Germany" because he finds it an improvement, as a winter residence, over the American state of Florida. "Nice temperatures but a shorter flight time, no security problems upon entering the country, no drugs or clubs for the teenage daughters," Kleindienst explains. And no BP crude in the azure water.

Except that future colonizers will have to request a new residency permit every six months. The permits aren't included in the price of a villa.

Nonetheless Kleindienst expects home prices to double. "The World is limited, after all," he jokes. A ring of breakwaters gives protection against tsunamis. Pirates and other criminal hazards will be deterred by 24-hour security.

An entire coral reef was cut off with a laser and anchored in the waters of The World. There's room in the same water for a casino ship. A temperature-controlled "rainy road" on the island of Sweden brings atmosphere; there will be art galleries; and on the party island -- also known as Monte Carlo -- a district inspired by Amsterdam, with lounges and clubs, will offer nightlife.

Kleindienst leans on a bulldozer and squints against the sun. The pumps of a neighboring island create a constant, dull buzzing sound.

The 80 cubic meters of fresh water needed daily for residents, pools and plants will be brought in by tanker ship. But Germany wouldn't be Germany if the project had not been analyzed by a German research organization -- the Fraunhofer Institute -- to ensure it is environmentally friendly.

"No other country has such a good reputation in Dubai. Germany stands for precision, diligence, engineering, ecology," says Kleindienst. "In short: advantage through technology."

The island of Germany will bloom in the glow of its own happiness, Josef Kleindienst believes. The first villa is meant to be finished next year. He's serious about this -- he invested his own money in these islands, which may be the difference between his own private Germany and the original. This one, at least, is debt-free.