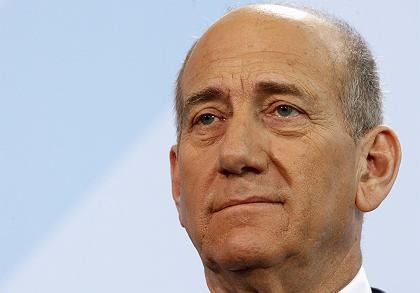 Olmert was speaking after a meeting with German Chancellor Angela Merkel.

"We are certain that the Iranians are engaged in a serious ... clandestine operation to build up a non-conventional capacity," Olmert said at a joint news conference with German Chancellor Angela Merkel after a meeting between the two leaders.

"Tell me, why does Iran need enriched uranium at a time when they are supplied by (the) Russians (with) the nuclear fuel for the civilian projects?," he asked. "What else do they plan for which they need the most sophisticated ballistic missiles?"

Olmert said he was sharing information with other countries about Iran's nuclear program, and that no options should be forgotten in trying to prevent Iran from developing atomic weapons. "As (US) President (George W.) Bush once said: no option is ruled out," he said.

Israeli officials have said Olmert planned to press Merkel for stronger international pressure on Iran at the United Nations, where a new sanctions resolution has been drafted, Reuters reported.

"This issue is mainly a challenge for the great powers," Olmert said, speaking through a translator. "We are very interested in coming to a solution that prevents the Iranians from continuing this program," he said, adding all diplomatic efforts to find a solution were welcome.

Germany has been among those leading efforts to allay concerns over Iran's nuclear ambitions. Merkel said: "I have always said that I believe strongly in a solution via diplomatic channels and that I'm counting on a diplomatic solution and nothing else."

Iran says it wants only to use nuclear power to generate electricity so that it can export more oil and gas.