DER SPIEGEL: Mr. Di Maio, all attempts to end the conflict in Libya so far have failed. The German government is now organizing an international peace conference in Berlin on Sunday. What's new this time around that might make a difference?

Di Maio: Germany very carefully waited for the right moment for the conference. This wasn't simply about creating a nice photo opp. Germany also had the foresight to look beyond the European partners. The meeting between German Chancellor Angela Merkel and Russian President Vladimir Putin was fundamental for defusing the situation. I am also pleased that United States Secretary of State Mike Pompeo is coming.

DER SPIEGEL: You also traveled to Morocco, Algeria, Turkey and Tunisia as part of the preparations. Prime Minister Giuseppe Conte also spoke with Egyptian President Abdel-Fattah el-Sissi and Turkish President Recep Tayyip Erdogan, as well as Fayez Sarraj, the head of Libya's United Nations-recognized government in Tripoli, and commander Khalifa Hifter, his rival in the east. How do you assess the situation on the eve of the Berlin conference?

Di Maio: Italy has tried to convince all actors to participate in the conference. This took months of work. And we briefed German Foreign Minister Heiko Maas immediately after each trip. I am very pleased that government representatives from so many countries are coming to Berlin. All in all, we in Europe have succeeded in putting the EU back into a central role.

DER SPIEGEL: Why has it been so difficult to reach an agreement?

Di Maio: This long-running conflict exploded in April and that changed everything. Both sides asked the Europeans for ammunition, weapons, soldiers and drones. We didn't want to be a part of that. And as Moscow has shown, no country can solve the complex situation in Libya by itself. That only happens in the movies. The reality is that everyone must sit down at the negotiating table.

DER SPIEGEL: Why is the problem so complex?

Di Maio: In Libya, there are not only two sides to the conflict, but many. These include tribes with origins in Tunisia and Algeria. That's why it is so important to also work with these countries.

DER SPIEGEL: In the past, Europe was divided on this issue. Is that the reason why the Russians and Turks have such big influence in Libya today?

Di Maio: Europe and Italy lost ground in Libya for one simple reason: We were not willing to supply weapons to the belligerents.

DER SPIEGEL: Others had fewer scruples.

Di Maio: War only ever begets more war. We're experiencing a major drone war right now. But even the non-EU countries that have provided support to the opposing factions understand that the problem is bigger than the conflict in Libya. The tensions between some Mediterranean countries are cause for even greater concern than the civil war between Benghazi and Tripoli. In light of this escalation, many countries understand that at this historical moment a diplomatic solution with a Europe that speaks with a single voice is best.

"We Are Experiencing a Proxy War"

DER SPIEGEL: How do you interpret the interests of the non-European participants at the conference?

Di Maio: There are many open questions. The United Arab Emirates are concerned about their battle against the Muslim Brotherhood. The Turks want to prevent Hifter from taking Tripoli. Egypt is worried the threat of terrorism is growing at its borders, a concern shared by Algeria and Tunisia. Given that Libya is full of actors who want to position themselves, the Berlin conference will be decisive for creating order.

Di Maio: I have served as foreign minister for four months now, and during this time, there has never been a problem with the French over Libya.

DER SPIEGEL: Italy needs Tripoli to prevent more refugee boats from departing for Sicily. And France is counting on Hifter to repel terrorists from the Sahel zone. In addition, there is also competition between Italy's and France's most important energy companies, Eni and Total. Does none of this play a role?

Di Maio: The real problem is that we in the EU have allowed so many other countries to get involved in Libya. But now the time has come for actors with different interests to work together. And Europe stands to lose the most in the Libya conflict. Just think of the 700,000 migrants in the country. If the war escalates, the humanitarian plight will also worsen, and many will come to Europe.

DER SPIEGEL: Who is it that needs to come to an agreement in Berlin -- the warring parties or their international backers?

Di Maio: Given that we are experiencing a proxy war, the point is to bring everyone involved to the negotiating table to ensure there is no further interference. In other words: Weapons deliveries need to stop. And more mercenaries need to be prevented from entering the country.

DER SPIEGEL: How will things proceed if an agreement actually takes shape in Berlin, if the participants agree to a cease-fire and a stop to arms shipments?

Di Maio: After that, the European Union will have the considerable task of guaranteeing all this. We will then need a European peace mission, in agreement of course with the Libyan parties and the United Nations.

"Libya Is and Must Remain a Single Entity"

DER SPIEGEL: What does that mean in concrete terms?

Di Maio: Weapons in Libya don't just arrive over the country's borders. They are also delivered by air and sea. That's why we need European peacekeepers with a mission that covers water, land and air in order to monitor compliance with the agreement.

DER SPIEGEL: Would Italy send its own soldiers under that scenario?

Di Maio: I believe it is the European Union -- and not individual EU members alone -- that can be a neutral and credible actor for such a mission. We are prepared to make our contingents available if, as I said, the Libyan parties and the UN agree.

DER SPIEGEL: Why would Hifter support a cease-fire at a time when he is already close to Tripoli and could soon win?

Di Maio: Even after months of fighting, he hasn't been able to capture Tripoli. And even if he does get to Tripoli, the war will be far from over.

Di Maio: The civil war would then become an urban war, fought street by street, house to house. It would be a bloodbath. You can't just raise a flag over Tripoli and claim you've captured the city. It's not that easy. Hifter can't control a city of 3 million with just 1,000 men. He knows this himself. And that's what all the international actors with whom I have spoken have told me, including those who support him.

Di Maio: We have always supported the United Nations-recognized government in Tripoli. But we have also always spoken with Hifter because we understand the complexity of Libya. Italy has known Libya for ages. We have also told the Libyans one thing: No matter what happens, there's one thing that can't be changed -- the geography. You will always be adjacent to Italy. It is therefore better to work together in a climate of dialogue.

DER SPIEGEL: Will we ultimately wind up with one Libya or two?

Di Maio: Libya is and must remain a single entity that we recognize as a sovereign state. But the country is comprised of several parts: Tripoli, Benghazi, Tobruk and Fezzan. We need to start a process that will enable peaceful coexistence between all the actors. 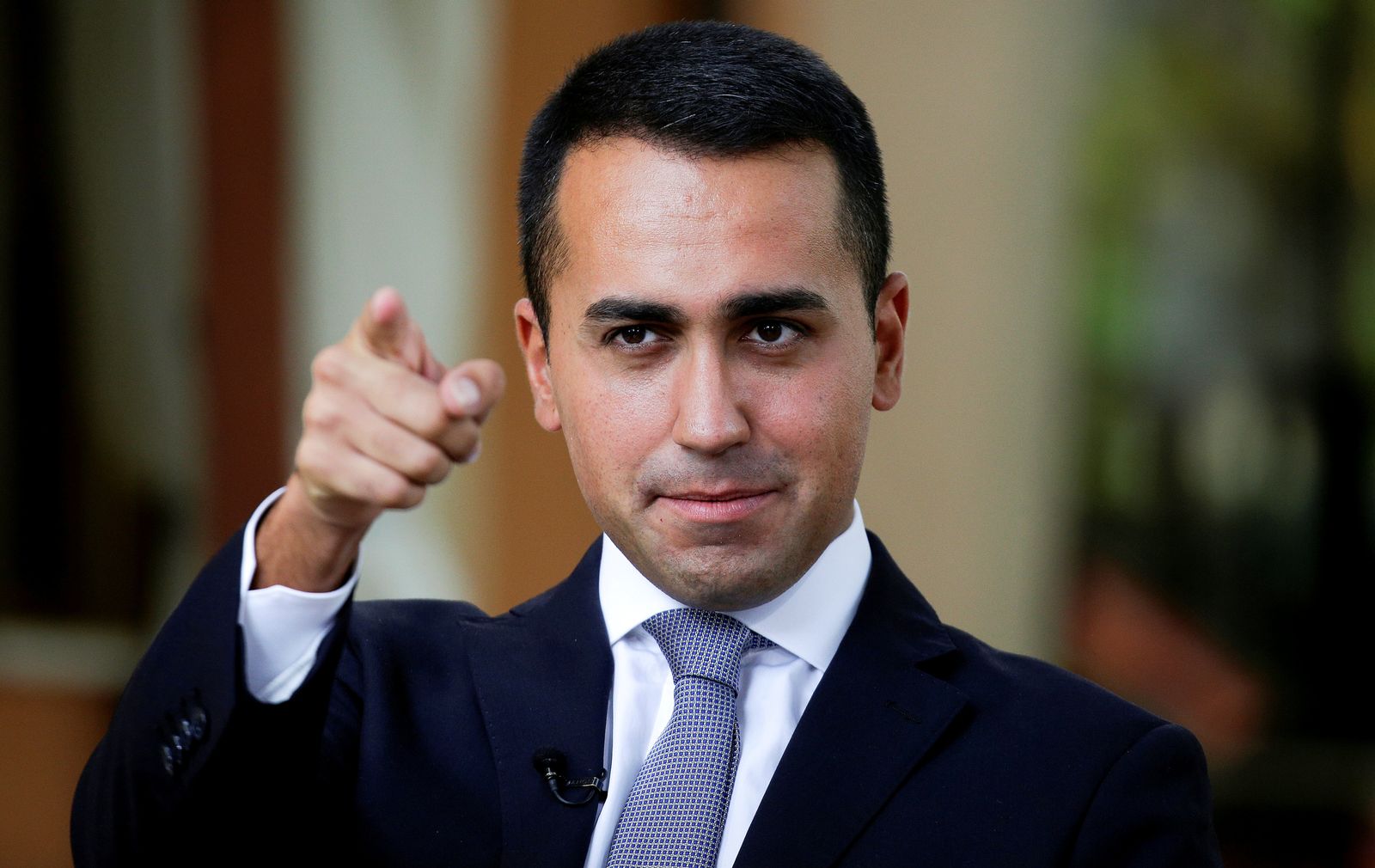 Italian Foreign Minister Di Maio: "It would be a bloodbath." 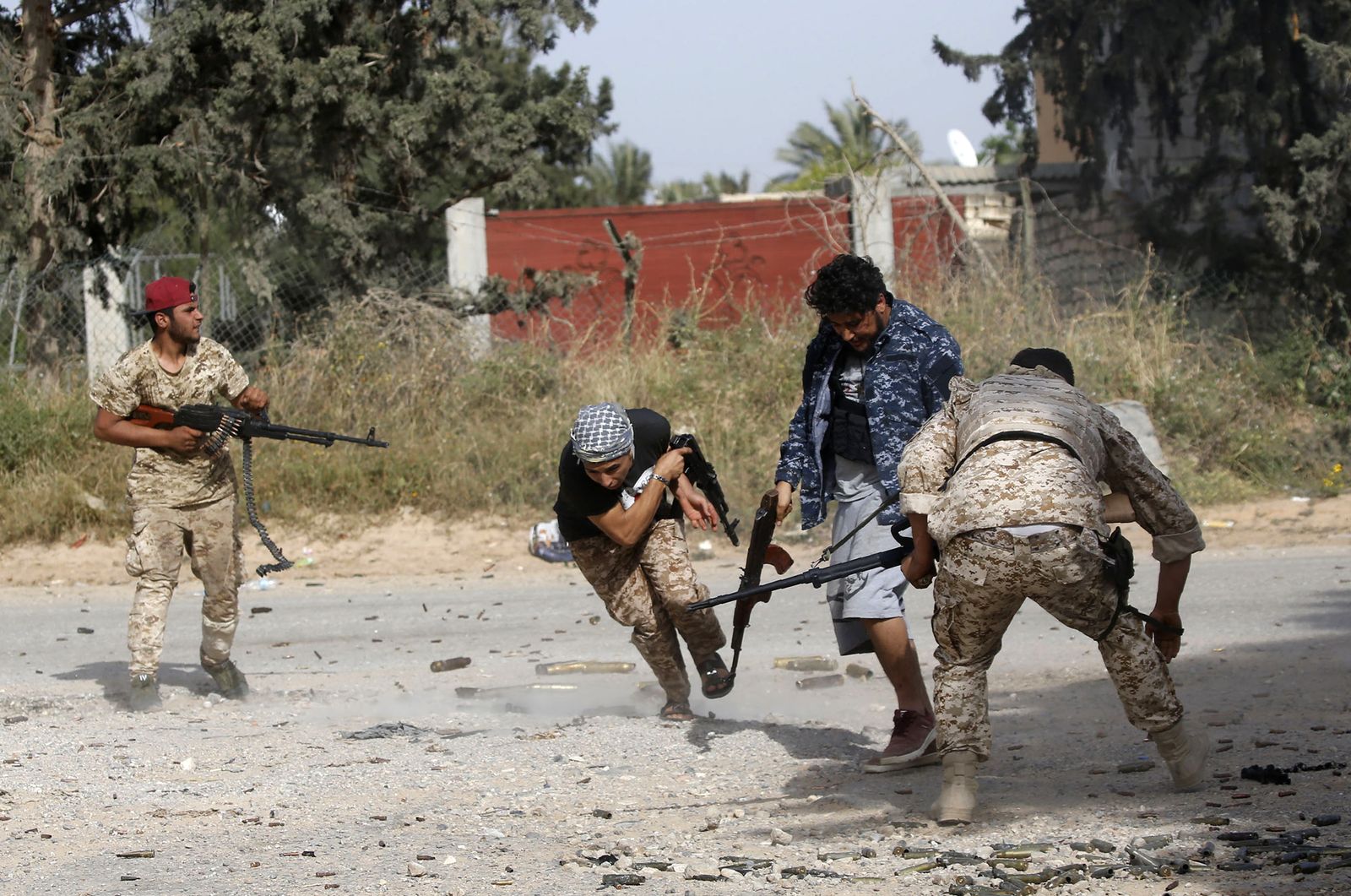 Fighting in Libya between fighters loyal to the Government of National Accord and forces loyal to strongman Khalifa Hifter: "War only ever begets more war."