SPIEGEL: Secretary Baker, 20 years ago the Berlin Wall fell and the unification of the two postwar German states happened a year later. Who deserves the credit for this great service?

Baker: A lot of people deserve the credit for it. The former leader of the Soviet Union, Michael Gorbachev, certainly must be named, who together with my former counterpart and friend Eduard Shevardnadze made the fundamental decision not to keep the Soviet empire together by the use of force. It had been built by force. It had been maintained by force. So that was a remarkable commitment. 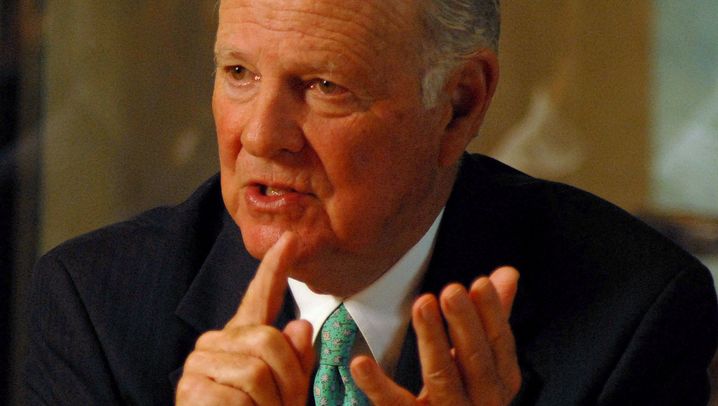 SPIEGEL: Why, in your opinion, did Gorbachev make this fundamental decision?

Baker: I believe that the Soviet leadership had concluded that they could no longer compete with the West, not economically and not militarily. The steadfast leadership of former President Ronald Reagan had begun to pay off.

SPIEGEL: In early 1989, a strategic paper from a State Department led by you saw Gorbachev engaged in a "public diplomacy blitzkrieg." Had the United States temporarily lost its leadership role in Europe?

Baker: Without American leadership there would have been no unification. Do not forget that Gorbachev wanted many things but not unification. France and Great Britain were also highly skeptical. They were very concerned that history would repeat itself. But we didn't feel that way here.

Baker: It wasn't just Adolf Hitler. Germany had twice within a very short time invaded its neighbors. They had in the back of their minds the first world war as well. My father was a soldier in World War I. I was not even 10 years old when Germany already instigated World War II.

SPIEGEL: What was the role of Helmut Kohl, who now has himself celebrated as the chancellor of Unification?

SPIEGEL: Kohl believes that his 10-point plan -- which he created in Oggersheim together with two friends from the clergy and his foreign policy adviser Horst Teltschik -- was the roadmap to unity. Is it true that he did not inform the Americans of this plan?

Baker: Kohl called Bush, but only after the plan had been publicly introduced in parliament. So, for us it was a surprising move.

SPIEGEL: Were you annoyed?

Baker: I would have preferred to have heard of the plan before it was announced, but we were not angry. In any case, the plan was not the central instrument on the path of unification. This plan had a rather vague concept of "confederative structures" between the two German states. Various forms of cooperation were suggested to get closer to this goal.

SPIEGEL: Did Kohl exaggerate the significance of his plan?

Baker: More important than the 10-point plan was a conversation between Kohl, Bush and myself in February 1990 at Camp David. In this conversation, we discussed two fundamental issues: German unification -- and what it meant for NATO. Kohl assured us: "Germany doesn't want neutrality in any way. A united Germany will be a member of NATO." He gave us this binding commitment.

SPIEGEL: So you trusted him?

Baker: He gave us his word. We gave him ours. We had a really strong and seamless relationship.

SPIEGEL: Did you have an alternative, a Plan B?

Baker: Not for the United States. We all had been talking about unification for 40 years and when the chance came, the opportunity came to do it, we should have done it. And we did it. It would not have been feasible to walk away. We admired the fact that Kohl, like Bush and me, was a practitioner of realpolitik. This may end up as a matter of cash for the Russians, he told us at Camp David. "You've got deep pockets," President Bush observed, not altogether kiddingly.

SPIEGEL: The French and the British were not nearly as sympathetic.

Baker: They were both unenthusiastic. But with Kohl's promise of a united NATO Germany, we also succeeded in convincing the skeptical French and the reluctant British. They had doubts but were unable to present an alternative.

SPIEGEL: How close was the relationship between Margaret Thatcher and George Bush at that time?

Baker: We were close to Margaret, but not as close as she was to Reagan. President Reagan occasionally allowed her to speak for the United States. When Bush, who was vice president under Reagan, came into office, one of the first things he had to demonstrate was that he was the leader of the alliance. However, the Soviets were the problem, not the British.

SPIEGEL: Did Gorbachev make a mistake in your eyes, as someone who practices realpolitik, when he didn't push for German neutrality, even though Germany and America profited from it?

Baker: Under his premise of no use of military force Gorbachev had no other choice. Americans, British, French and the German Federal Government said no to neutrality. On the other hand, the population of East Germany would no longer have accepted the survival of the GDR. Unification was a vote expressed by walking away. Gorbachev could only have stopped the course of events by the force of arms.

SPIEGEL: And yet this retreat of the Soviets, who had for decades tried to hold the West in check with proxy wars and sharp rhetoric, even now seems like a miracle.

Baker: I recall when Gorbachev visited us at the White House. We were in the Cabinet Room when he acknowledged that any country should have the right to choose any alliance it wanted to join. When he did that, it was done. I was sitting there and thought: Wow!

SPIEGEL: "We Americans never danced on the Wall," you once said. Why such modesty?

Baker: The scope of our negotiations with the Russians was not over on the day the Wall came down. We needed them for the soon to follow "Two-Plus-Four" negotiations (between the two Germanys and the four powers that occupied Germany after World War II -- Russia, the United States, Britain and France), we needed them later on for the disarmament talks. We did not want to do anything that could have caused unnecessary embarrassment for Gorbachev.

SPIEGEL: The Reagan administration, where you served as secretary of the treasury, was more of a stranger to this kind of restraint. "Tear down this Wall, Mr. Gorbachev," Ronald Reagan called out at the Brandenburg Gate.

Baker: That was correct at the time. Reagan's determination, part of which was the decision to start SDI, the ballistic missile defense system, formed the basis for the events that led to reunification. But as events happened in rapid succession and history sped up dramatically, any triumphalism would have been misplaced. You could not do business with Gorbachev and simultaneously stab him in the eyes.

SPIEGEL: And that clearly was not the nature of the 41st President. "I am not an emotional kind of guy," he once famously said about himself.

Baker: George Bush was a wise president. History will duly respect him for his restraint.

SPIEGEL: Were you ever in the GDR?

Baker: I was the first and the last US Secretary of State who visited that state. Shortly after the Wall opened, at Christmas time 1989, I drove across the Glienicker Bridge to the Potsdam Inter-Hotel to meet Hans Modrow, the hope of the Socialist Unity Party of Germany. That was a surreal experience for me.

Baker: It was as if someone had switched the world from color to black and white. Everything was gray, the clothes, the houses, the people, the atmosphere. On the streets these small Trabbies could be seen, but not even many of them.

SPIEGEL: What was your impression of Modrow?

Baker: The only thing I can recall is that we spoke about free elections, which then were not actually guaranteed, when suddenly a man entered the room. He looked like Egon Krenz, the former head of the Party. Now we are going to have problems, I thought. Only when he asked me if I wanted a mineral water I realized that he was not Krenz, but the waiter.

SPIEGEL: Hans Modrow lost the first free elections and from then on you had to deal with the Christian Democrat Lothar DeMaiziere.

Baker: I remember he was the GDR representative facing us at the Two-Plus-Four talks. I am proud of that format of negotiations -- where both German states and the four World War II victory powers met to discuss a path to German unity. We accomplished it despite all sorts if resistance and it brought the desired goal: Unification of the two German states, NATO membership for Germany and the withdrawal of the Red Army from the former GDR.

SPIEGEL: Not everybody supported your diplomatic approach. Prior to this interview, you granted SPIEGEL access to your personal papers. It emerged that just at the moment of a great diplomatic triumph there was still some debate inside the US government about which direction to take. What exactly had happened?

Baker: It happened in Ottawa in February 1990 at the joint conference of the NATO and Warsaw Pact states. I had just won agreement from the British, the French, the Russians and the Germans for the Two-Plus-Four process. But when I called President Bush and gave him the good news in the presence of his national security adviser, Brent Scowcroft, there was hesitation. "I am not sure if that is a good idea," Scowcroft said. "We are moving too fast." I replied that everybody had agreed. Not everybody, Scowcroft insisted: "Not Kohl." Now the President said: "We really need to make sure Kohl agrees with this."

SPIEGEL: Why these doubts about the Two-Plus-Four format?

Baker: For one, in every administration there are tensions between the national security advisor sitting at the White House and the secretary of state. Secondly, some of Scowcroft's staff members had reservations about the Two-Plus-Four process. We had had many discussions earlier as to whether this format was the right one. And the president had agreed that it was. But for some, everything was going too fast. Let me add that Bush's national security apparatus acted like it should. There was no back-biting.

SPIEGEL: Had Kohl actually questioned his participation in the Two-Plus-Four negotiations?

Baker: There was absolutely no indication of that. Kohl was on board. I said to Bush: "Look. I have got this thing negotiated. It's done. We cannot walk away from it now. Nonetheless, I had to speak to (then German Foreign Minister) Hans-Dietrich Genscher again and enquire about Kohl's position. I convinced the president to call the German chancellor and Kohl affirmed his full support for the Two-Plus-Four discussions. Finally, Bush said to me: "He is okay with Two-Plus-Four, go ahead."

SPIEGEL: How was your relationship with the president?

SPIEGEL: What have you learned about the Germans in all your negotiations over the years?

Baker: Germany can be relied upon. While I understood the fears of the French and the British, I did not share them. When the unifications papers were signed, I jokingly said to Hans-Dietrich Genscher: The next time we will negotiate about the German-Chinese border. But Germany did not become expansive. The joke remained a joke. History does not repeat itself.

SPIEGEL: Secretary Baker, we thank you for this interview.