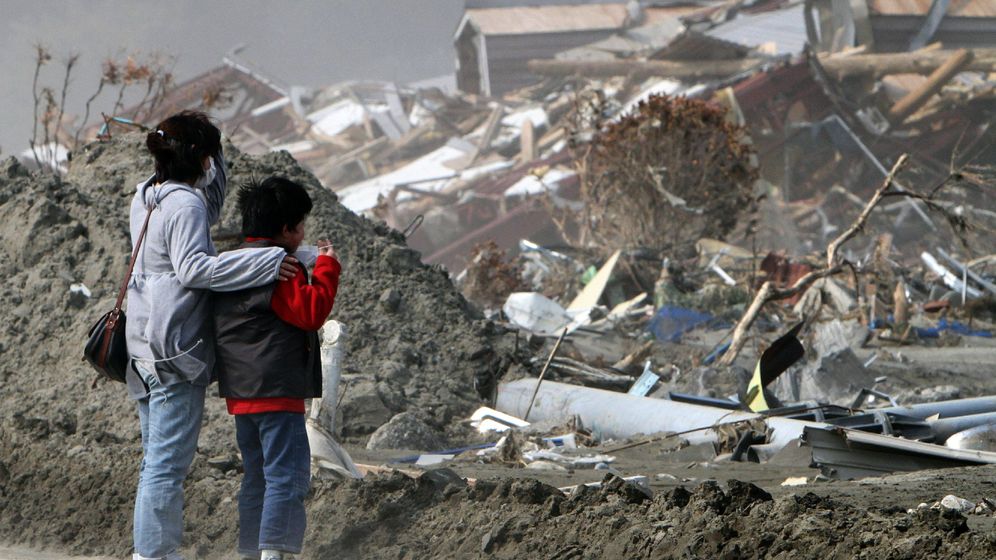 The Kumagai family's silver Nissan Sunny was headed uphill when the wave arrived. After weeks of searching, Keiji Kumagai found the car and took a picture of it with his mobile phone. His father, mother and one of his brothers died in the vehicle, while another brother, Seiji, managed to escape. Keiji was not in the car when the tsunami struck.

"Tsunami, tendenko," or rules of conduct in extreme emergencies, are drilled into the Japanese from their first days in school. The rules dictate that when a tsunami happens, a person should run away, preferably uphill, and not pay any attention to anyone else, not even family members. Seiji Kumagai stuck to the rules, which saved his life.

Now he and his brother Keiji are standing together on a baseball field-turned cemetery in the coastal city of Kesennuma, gazing at the three simple pine coffins that contain the bodies of their dead parents and brother. Ten people are being buried this morning. The two crematoriums in Kesennuma are unable to keep up with demand, and cremations based on Buddhist rituals must be postponed as a result. The first graves were dug here a few days ago. The graves assigned to the Kumagai family are numbered 63 to 65.

Keiji says a few words, and then the mourners bend over the coffins one last time and open a small window that offers a view of the dead through a pane of glass. The father saw the wave coming with an almost child-like expression of astonishment on his face -- his eyes and mouth were wide open.

They had, of course, heard the tsunami warnings, says Seiji. Then they quickly jumped into the Nissan, not wanting to force their elderly parents to walk up the hill. It was a fatal mistake, as Seiji knows today. A panic erupted among the residents living near the fishing port, where the Kumagais' house stood, as everyone tried to get out at the same time. A traffic jam ensued, and in the end the wave inundated everyone and everything in its path.

A few steps from the spot where the Kumagai family's house stood near the fishing port, an old woman is still searching for her husband in the wreckage, while her son digs family photos out of the sand. They don't allow themselves to cry.

Anyone who travels north along the coast from Fukushima, through a rural area that many in the highly developed south regard as backward, will encounter a swath of destruction in almost every bay along hundreds of kilometers of coastline.

Set against a backdrop of foothills, the towns in the region are spread out on flat coastal strips of land. When the tsunami came, it descended on these towns like a hurricane, flattening them as if they consisted of houses of cards. The foothills acted as a buffer, preventing the deadly wave from going farther inland. Some 24,000 hectares (about 59,000 acres) of agricultural land were flushed away. Rice fields gave been obliterated, and even 100 kilometers (62 miles) from the stricken Fukushima nuclear power plant, cabbages and spinach are rotting in warehouses. Few are willing to buy vegetables from the region these days.

The latest casualty figures are published in the morning newspaper every day. Close to 30,000 people have now been reported dead or missing along the entire devastated northeast coast. The number of people officially declared dead is still rising by 100 to 150 every day, while the number of the missing is declining, albeit at a much slower rate. The full scope of the tragedy is still unclear.

It took Japanese Prime Minister Naoto Kan three weeks before he finally flew by helicopter to one of the coastal cities devastated by the tsunami. When asked by a survivor where her new house would be, the prime minister offered an exceedingly ambiguous answer: "The government will do everything to support you until the end."

In Minamisanriku, farther down along the Pacific coast, the Japanese satellite navigation system in our car indicates streets and buildings of a city that no longer exists. Plumes of smoke waft over a vast, sea-level wasteland covered with tree trunks stacked like Mikado sticks, houses that were pushed inland like toy blocks, and upended ships that look like whales stranded on a pile of debris stretching to the Pacific.

Until March 11, 2011, Minamisanriku had a population of 18,000 people. About 1,000 residents have already been reported dead or missing. Two-thirds of the survivors are homeless. The full scope and reality of the disaster only emerges bit by bit. By destroying paper records and computer files, and the registers of births and deaths, the tsunami also wiped out the memory of this city.

Kenji Endo, the deputy mayor, is sitting in a container, his temporary office, up on a hill near the Bayside Arena.. From here, he organizes the search for the missing and attends to the needs of survivors. The more than 1,000 evacuees being housed in the nearby arena need food, clothing and medical care. The only privacy they have consists of 30-centimeter (10-inch) cardboard dividers surrounding the four to five square meters (43-54 square feet) of floor space each family is allotted.

Kenji Endo was 12 when he witnessed the 1960 tsunami. Everything was far worse this time, he says, and it was almost a miracle that he survived. He takes his jacket from a hook on the wall and says: "Let's take a drive down there."

A rusted brown, three-story steel frame in the middle of the field of debris is all that remains of the building where Endo survived by climbing up to the roof. Immediately after the earthquake warning was issued, about three dozen people fled to the building, which housed the local emergency management office. They included Endo, the mayor and a young woman named Miki, who died trying to save others.

"Miki was using the public address system on the third floor to issue the tsunami warning," says Endo. Amateur videos show the 24-year-old, recently married employee, speaking steadfastly and forcefully, as she urged her fellow citizens to run uphill -- and continuing to do so as the wave of grayish-black water was already rushing over houses and cars and the mayor and deputy mayor were running up the stairs to the roof.

To this day, there is no trace of Miki. Endo survived by holding onto a banister when the wave came. He tried "not to breathe underwater for one to two minutes," says the deputy mayor. The wave returned 10 times, he adds. Only ten out of the forty people who were with him on the roof survived. Endo was rescued 23 hours later.

Anyone who walks through Minamisanriku today sees a Pompeii on the Pacific, with the evidence of a lost era appearing in every nook and corner. A wall clock that stopped at 3:31 p.m. -- apparently the time when the tsunami struck this part of the coast -- lies on a hill high above the sea. At the hospital, furniture and household goods bulge from the windows up to the third floor, looking like the entrails of the building. In front of the entrance, a boy searching for his missing father climbs carelessly over a dead sea turtle.

"Although it is my job to say something different," says the deputy mayor, "I don't think we should rebuild here. Our retaining wall in the harbor was five-and-a-half meters tall. The wave was apparently up to 30 meters high in some places. Houses will have to be built higher up the hill in the future."

There are already rumors that the government intends to buy the devastated areas to prevent new development. The region has long suffered from depopulation, with young people moving away to the cities to find work, leaving the older generations behind. Tokyo has tried to fight the impending demise of the local farming and fishing industries with subsidies, and with the construction of nuclear power plants to create jobs in the underdeveloped region.

But what if the heavily indebted country had to pay up to €220 billion ($317 billion) to rebuild the coastal cities? Most of the survivors in Minamisanriku say they want to return to where their houses once stood. And there is one man in the city who firmly believes that this will happen: auto dealer Takahiro Horiuchi, whose business on the edge of the disaster zone was only slightly damaged.

Horiuchi reopened the dealership a week ago. From the parking lot outside his door, he can still see, stretching down to the coastal strip, about 10,000 cars that the tsunami turned to scrap metal. The wave carried them onto roofs, pushed them off bridges, shoved them together and whirled them around the city like toys. But now the auto dealer is seeing the first signs of normality, and of a new reality. "I've already received 20 pre-orders in the first five days of the week," says Horiuchi.

In the harbor district of Kesennuma, the debris is still piled high along both sides of cleared streets and paths, but at least it has been neatly pushed to the side. Rescue forces are working nonstop, and yet the task they face is Herculean. Working in ankle-deep, gray mud, surrounded by dead fish and metal wreckage, they can only proceed one meter at a time.

Soldiers with the United States Army based in Japan are also helping out, as part of the "Operation Tomodachi" ("Operation Friend"). They have brought in drinking water on the USS Ronald Reagan, an aircraft carrier, and have distributed 77,000 frozen hot dogs to hungry Japanese. Helicopter crews and divers are help in the search for the missing.

The Germans were there as well, at least nearby. Forty-one men and women from the Federal Agency for Technical Relief (THW) arrived with three dogs and 15 tons of equipment, including concrete saws and cutting devices. But they only made it to Tome, a half hour's drive from the disaster zone. Three attempts to reach the coast failed. Exactly "100 hours after the incident occurred," says a THW spokesman, "the rescue phase was discontinued." Disappointed but happy not to have been exposed to radiation, the Germans returned home soon afterwards. "Their most important contribution was the PR effect," Tome city officials explain politely. "The media came with the THW. As a result, it became clear to everyone here that now we all have to help out."

In addition to old fishermen's houses, part of Japan's postwar world came unhinged along the Pacific coast. As they saw the living environment of hundreds of thousands of people destroyed, the Japanese felt their faith in the blessings of technology and continuous prosperity being shaken.

In the port of Kesennuma, they were secretly proud of being the city responsible for processing 90 percent of the shark fins in Japan. They had faced criticism from abroad after reports described the giant buildings in which the predators' most valuable body parts were cut off. There were also warnings that the dramatic decline in shark populations off Japan's coasts could jeopardize the natural equilibrium.

The tourists who used to come to Kesennuma for its famous shark fin soup will not be coming anymore. The factory is in ruins, just like everything around it that was of value to the people living on the coast here. Houses, cars, television sets and Playstations are now all wildly tangled, compressed and reduced to small pieces -- to form a contemporary symbol of impermanence. 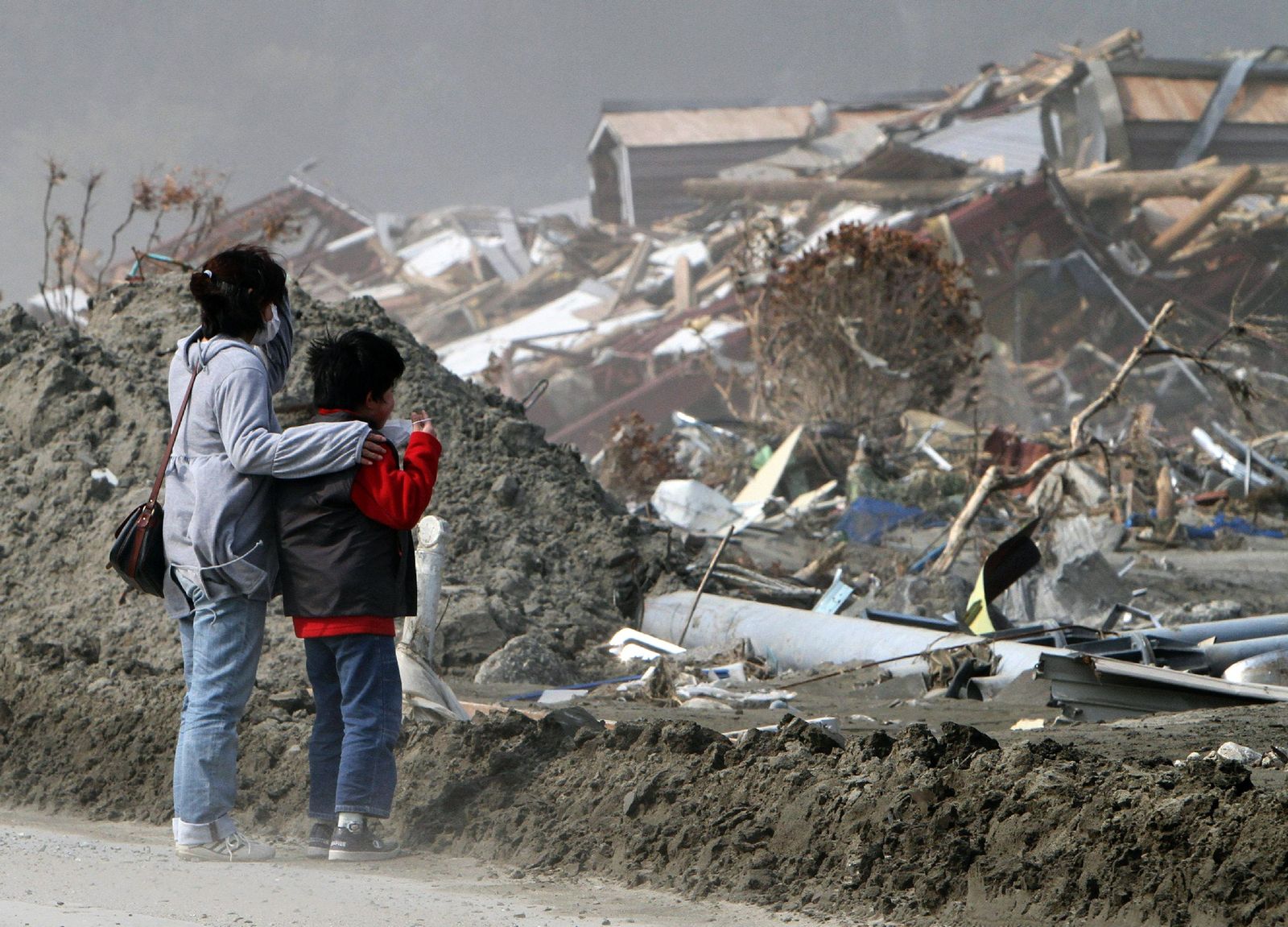 Survivors survey the devastation in Rikuzentakata, Iwate prefecture. There are already rumors that the government intends to buy the devastated areas to prevent new development. The region has long suffered from depopulation, with young people moving away to the cities to find work, leaving the older generations behind. Tokyo has tried to fight the impending demise of the local farming and fishing industries with subsidies, and with the construction of nuclear power plants to create jobs in the underdeveloped region.