SPIEGEL: When was the last time you spoke to President Barack Obama?

Jackson: It has been a while.

SPIEGEL: But you were one of his early mentors in Chicago and the picture of your public tears in Chicago's Grant Park after his election victory in 2008 went around the globe. How would you describe your current feelings about his presidency?

Jackson: At that moment in Grant Park, we were finally winning, but I was reflecting on the long journey, the many years of struggle for civil rights. Obama ran the last lap of a 60-year campaign. I thought of all the bruises we endured during this campaign and I thought of Dr. Martin Luther King and wished he had been there just for 20 seconds to see how 60 years of struggle suddenly paid off. Sure, some layer of the excitement of that night is gone.

SPIEGEL: Is it true that even among African-Americans Obama's standing has suffered?

Jackson: We blacks were the first people embracing Obama, long before the people at expensive fundraisers were supporting him. We gave him his first love, 96 percent of blacks voted for him in 2008. Yet today we are the number one in unemployment, with 16 percent of American blacks out of work. We are number one in foreclosure, number one in short life expectancy, in loan default. Big banks steered their toxic products toward minorities and Congress did not oversee them properly because it is basically corrupted by all the money it is raising on Wall Street. So there is a lot of pain here in our community and this pain must be addressed.

SPIEGEL: And you don't feel the President is doing that?

Jackson: I would not use that kind of language. But we have some incredibly powerful forces for Wall Street in Congress. The laws are stacked for the wealthy.

SPIEGEL: In Obama's White House too?

Jackson: Just as he has an economics advisor, I wish there was a labor leader to balance that too. The poor and unemployed currently have no voice in Washington.

SPIEGEL: During the recent negotiations on the debt ceiling Obama agreed to billion dollar cuts in public spending and received no tax increases in return from the Republicans. Is he too willing to compromise?

Jackson: I think he sometimes underestimates the force of the other side, how tenacious they are in their ideology. A few weeks ago, during the debt ceiling negotiations, Obama went golfing with John Boehner, the Republican speaker of the House. Afterwards, they said their differences are not ideological, not philosophical. Really? If Republicans say they want to cut public spending drastically, they want to cut social security and Medicare and the social safety net for poor and working families, and cater to the wealthiest Americans, then that is a different philosophy. If the Tea Party is determined to kill the New Deal and Great Society programs we won in the past, that is a different ideology. And if the right wing of the Republican party is determined to shield themselves from tax obligations or to fight the Civil War again by pushing voter suppression legislation to take away minority voting rights across the country, that is also a very different ideology.

Jackson: He underestimates how ideological the other side is, and how determined they are to destroy him, even when their actions harm the nation's economy and millions of people. I think reconciliation is Obama's goal -- but the fight with the Republicans is like a fight with pit bulls, they never let go. Even worse, now the Republicans feel they can keep pushing and he will keep giving. They have not seen a stiff resistance on his part. The American people on the ground need a clearer, stronger, Lyndon B. Johnson-type voice from their president. Obama has that voice. It has to be used. For instance, I hear he will be taking a bus tour around the country now. I think that should have happened before the debt ceiling negotiations, so that people in every state know what they have to lose if the federal budget is cut even further.

SPIEGEL: Do you think Obama is more reluctant to address such issues because he does not want to be stereotyped as a 'black president?'

Jackson: In some way… Bill Clinton had certain freedoms to address blacks and their issues because he was a white president. Obama, to the contrary, has to endure insults like no other previous president. Look at the coded language the Right is using against President Barack Obama. Openly calling him a liar in Congress, saying he is 'not a Christian, he was not born here, he is not one of us.' That makes addressing such issues trickier for the first African-American in the White House.

SPIEGEL: You yourself had doubts about Obama's take on race relations, though. During the 2008 campaign, you said he was 'talking down' to black people.

Jackson: I regret a statement I made on tape that was insulting. But Obama's focus on talking about black responsibility gave the impression that our problems are based primarily on a lack of responsibility and less on a lack of resources. It gives the impression that somehow we are unemployed because we are not working as hard. And there is no evidence of that. The gap between black and white has widened in America. There is a growing health gap, a housing gap, an income gap. But this gap is not an effort gap, it is structural and institutional - the continued legacy of centuries of slavery and legal segregation. And don't forget: The black community was essential for Obama's victory. He must nurture that base if he wants to be re-elected. 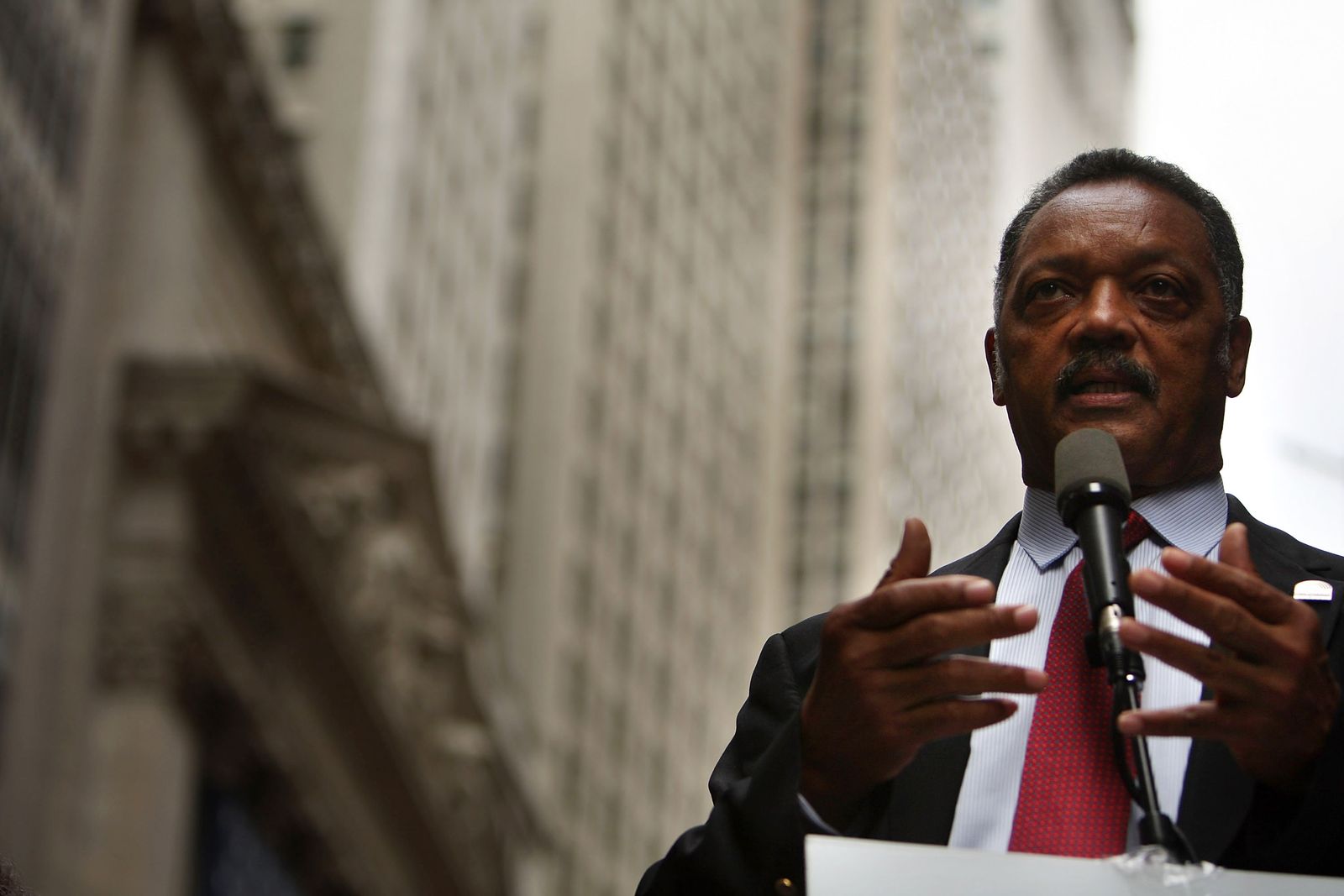 Rev. Jesse Jackson, a Democrat, speaks near Wall Street in a file photo.