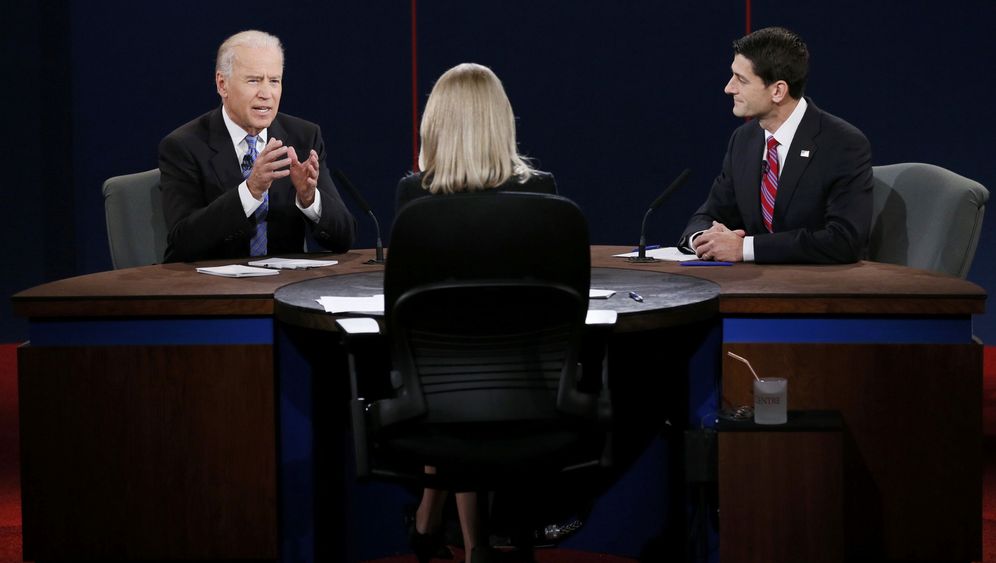 If there were no Joseph Robinette Biden Jr., we journalists would just have to make one up. The American vice president's verbal slipups simply can't be beat. For example, he once praised Barack Obama, his future boss, as "the first mainstream African-American (presidential candidate) who is articulate and bright and clean and a nice-looking guy." Speaking before a largely African-American crowd in August, Biden warned that Republicans are "going to put y'all back in chains." And, more recently, while heaping praise on Obama's performance as president so far, Biden said that the middle class has been "buried" under the president's leadership.

In fact, some Obama aides have so little trust in Biden that he hasn't been allowed to conduct any major interviews with journalists in months. Meanwhile, Republicans joke that they would like to see more Biden appearances because he can help the campaign of Mitt Romney and Paul Ryan like no other.

Still, following Thursday night's TV debate in Kentucky between the current vice president and the man who wants his job, only one man should be laughing: Joseph Robinette Biden Jr.

With his debate performance, Biden has almost single-handedly revived the Obama campaign, which was in danger of being put on life support after the president's disastrous debate performance in Denver. Granted, at times, Biden seemed so aggressive and wound-up that a Twitter site devoted to his ostentatious guffawing was promptly set up during the debate and quickly attracted almost 8,000 followers. The verdict on the social networks was unanimous: Biden had probably drunk a few too many Red Bulls before the debate.

Still, the high-octane vice president easily accomplished his most important goal: He showed that he is absolutely dead-set on keeping his job, whereas Obama only rarely gave off that impression during his own debate.

Biden was already on the attack with the first question. Moderator Martha Raddatz, a senior correspondent for ABC News, asked Biden about the tragic death of the US ambassador to Libya and three other Americans during a Sept. 11 attack on the US Consulate in Benghazi, Libya, which has led to questions about whether the facility was sufficiently protected. When Raddatz asked whether this was "a massive intelligence failure," Biden's response left no doubt that he was determined to talk tough. "I can make absolutely two commitments to you and all the American people tonight," Biden said. "One, we will find and bring to justice the men who did this. And, secondly, we will get to the bottom of it ... because whatever mistakes were made will not be made again."

Moments later, he reprimanded Ryan for his creative arguments about how America should confront Iran and its nuclear program. "Facts matter," he said. "Facts matter."

Most importantly, Biden showed that he didn't have any qualms about reminding people about Romney's secretly recorded statements on the "47 percent" of Americans who supposedly see themselves as "victims," don't take personal responsibility for their lives and are dependent on state assistance.

"These people are my mom and dad -- the people I grew up with, my neighbors," Biden said. "They pay more effective tax than Governor Romney … They are elderly people who in fact are living off Social Security. They are veterans and people fighting in Afghanistan right now who are, quote, 'not paying any tax.' I've had it up to here with this notion (about) 47 percent -- it's about time they take some responsibility here."

The Opposite of the 'Listless President'

In short, Biden was the exact opposite of the "listless president" that Barack Obama showed the world last Thursday. "Biden was direct, folksy and a little rude -- but it worked," said Larry Sabato, an election expert at the University of Virginia. "He made more and better comebacks in five minutes than Obama made in 90 last week."

But is that really important? Shouldn't this be about substance and not just catchphrases? TV debates are the game shows of American presidential elections. More than 50 million people tuned in for this debate alone. They're like some kind of TV campfire hour that attracts the very Americans who will ultimately determine this election.

And we're not talking about political junkies who have been following Twitter feeds for the past 18 months. Many US voters have only just tuned in to the election. And while they can't be described as uneducated, they often aren't well informed -- and they make decisions based on gut feelings rather than on policy proposals. What matters most to them is decisiveness. What they want in a candidate who can't wait to get to work in the Oval Office.

During the first television debate between the candidates, Romney illustrated precisely this desire. But Obama looked uncomfortable debating on stage -- as if he dreaded the idea of another four years in the White House.

His odd appearance may have done more to frighten off voters at the base of the Democratic Party than undecided centrist voters. But it is precisely the left-leaning party base that Obama needs to attract to the ballot box in order to defeat Romney.

Despite all the spin (or perhaps because of it), Biden succeeded in energizing precisely this group of voters. In that sense, he gave Obama a boost. Obama's next opportunity to take on Mitt Romney will come during the town-hall-style debate on Tuesday. If it is Biden's laughter that America is talking about between now and then, then perhaps Obama's own debate debacle will be forgotten by then.

Ultimately, Biden proved to be Obama's best man. And that's no joke.