SPIEGEL: Mr. Assange, after WikiLeaks published emails and documents from the Democratic Party during last year's presidential campaign, Donald Trump said: "I love WikiLeaks." But in April, CIA Director Mike Pompeo called the organization "a non-state, hostile intelligence service." Is the U.S. government stepping up the pursuit of WikiLeaks?

Assange: People love WikiLeaks when it is exposing corruption in their opponents. People oppose WikiLeaks when it is exposing corruption or dangerous behavior in themselves. We have exposed extremely dangerous incompetence in the CIA, with their giant hacking program and the group of hackers they have installed at the U.S. Consulate in Frankfurt. Now, Trump's CIA director Pompeo has started the counterattack.

SPIEGEL: He said: "This," meaning WikiLeaks, "ends now." That sounds rather threatening.

Assange: I think it is very serious that he chose to make WikiLeaks the dominant theme of his first speech as head of the CIA. Particularly when combined with the statement of the US attorney general that my arrest is a priority.

SPIEGEL: What WikiLeaks members are under investigation by the grand jury in Virginia, aside from yourself?

Assange: As far as I know, the grand jury is investigating WikiLeaks journalists Sarah Harrison, Joseph Farrell and Kristinn Hrafnsson. It is investigating me and Jacob Appelbaum, who is a supporter of WikiLeaks. And U.S. officials also recently said that they are going after the staff of WikiLeaks.

SPIEGEL: The most important WikiLeaks source, former U.S. soldier Chelsea Manning, was released from military prison on Wednesday, the result of a pardon from Barack Obama after she served seven years behind bars. Did she reveal details of a possible cooperation with WikiLeaks?

Assange: First of all, her release is an amazing victory for which we and many others have fought very hard. We are proud of that, though she should have been pardoned and compensated, not simply given clemency by Barack Obama. You must remember that the UN special rapporteur on torture, Juan Mendes, found Manning had been subject to cruel, inhumane and degrading treatment. In her trial, she produced a statement that she had communicated with someone from WikiLeaks but, contrary to what CIA director Pompeo claimed, WikiLeaks had not instructed her.

SPIEGEL: Recently, you have been the focus of fierce criticism from a growing number of politicians and journalists who are linking WikiLeaks to Russian propaganda and disinformation.

Assange: That is all spin. After Hillary Clinton lost the election, she and her campaign manager John Podesta decided to blame it on FBI director James Comey, on Russia and on WikiLeaks.

SPIEGEL: The credibility of Wikileaks depends on it being non-partisan, on not having a hidden political agenda.

Assange: WikiLeaks' credibility with the public depends on our proven record of accuracy. In 10 years, we have published over 10 million documents. Not a single one of them had been proven to be forged. But of course, every source has its own interest. That's a basic law of journalism.

SPIEGEL: Do you know your sources?

Assange: We usually have very good insight into our material to authenticate it. In some cases, that means that we also develop insight into a source.

SPIEGEL: If the U.S. government were able to prove that the CIA documents WikiLeaks has published were submitted by Russian sources, that would damage the credibility of WikiLeaks severely, don't you think?

Assange: That is a media fantasy. The official position of the U.S. government, as expressed by Barack Obama in his last press conference as president, is that the it has no evidence whatsoever of collusion between WikiLeaks and Russia. U.S. officials have said they believe that the CIA documents don't come from a state party, but from an American private contractor.

SPIEGEL: But you can't deny that WikiLeaks lost a lot of its popularity since it published documents about Hillary Clinton and her campaign.

Assange: What are you saying? If we hadn't published Hillary Clinton's Goldman Sachs speeches, she would have won? Or should we have censured information to favor one candidate? WikiLeaks will never do that.

SPIEGEL: Increasingly, though, secret services seem to be trying to influence the outcome of elections in foreign countries.

Assange: That may well be.

SPIEGEL: If these secret services are using WikiLeaks as a useful weapon, you can't just lean back and say: "That may well be."

Assange: Secret services are planting things in the media every day. And if WikiLeaks is logistically able to publish documents before an election, we will do that - and that's also exactly what the public expects.

SPIEGEL: You don't care if WikiLeaks influences the outcome of elections?

Assange: WikiLeaks is made up of human beings who have different political views. But we cannot undermine our publicly given commitments, our publicly stated principles.

SPIEGEL: And these principles require that you publish authentic documents as quickly as possible, regardless of who benefits or is damaged?

SPIEGEL: What sort of circumstances?

Assange: If we were on the brink of a nuclear war and a WikiLeaks publication could be misinterpreted, then it would make sense to delay the publication.

SPIEGEL: You didn't delay the publication of the material which harmed Clinton.

Assange: We are not in this business for likes. WikiLeaks publishes documents about powerful organizations. WikiLeaks always will always be the bad boy.

SPIEGEL: What do you have to say to people who accuse WikiLeaks, among others, of being responsible for Donald Trump's election as U.S. president?

Assange: WikiLeaks revealed the dirty tactics of the Clinton campaign. Some voters took it in. It was their free choice to do so. That's their right. That's democracy.

SPIEGEL: As secretary of state, Clinton sought to take action against WikiLeaks. Was the publication of Democratic Party documents a kind of vendetta?

Assange: That is U.S. East Coast psychobabble. The reason that WikiLeaks follows its principles is because one man has a problem? No! But here is some historic irony behind it. Clinton was involved in putting our alleged source Chelsea Manning in prison. There seems to be some natural justice.

SPIEGEL: You derived satisfaction from her loss?

SPIEGEL: You are smiling.

Assange: On a personal level I would probably get along with her quite well. She is a charismatic person. She is a bit of wonk - like me. A little bit awkward - like me. However, there has to be a line drawn. She decided to destroy the Libyan state. As a result, she fueled the European refugee crisis. We published a lot of her emails on how this unfolded. It seems an inescapable conclusion that she is a war criminal.

SPIEGEL: Are we heading for an era in which the party with the better hackers wins the election?

Assange: Not necessarily. If we have a look at the Macron leaks, it is clear they came too late to have an impact on the elections. The documents have a very conspicuous insertion of metadata, which point to a guy who is a contractor for the Russian secret service FSB. But why should Russia signal it is behind it? That would be a rather stupid mind game.

SPIEGEL: The initial WikiLeaks mission statement from 2006 said: "Our primary targets are those highly oppressive regimes in China, Russia and Central Eurasia." But we haven't learned much about these countries from your organization.

Assange: That's absolutely false. This wrong impression is the result of navel gazing in the West and the United States. When we publish in languages other than English, in New Nork they don't care.

SPIEGEL: But your biggest scoops, like documents about the wars in Afghanistan and Iraq, the Clinton emails or the recent CIA documents, have all targeted the United States.

Assange: Because the U.S. is an empire with 700 military bases spread across the world. That which exposes American power is of interest worldwide. When we published 2.3 million Syrian documents, including emails from Bashar al- Assad, it wasn't seen as a scoop.

SPIEGEL: After Russia's annexation of Crimea, you wrote on Twitter that the U.S. had annexed the entire world with mass surveillance. Is it wise to excuse one crime with another?

Assange: Come on. That's typical journalistic cherry picking. I have been very critical of Russia's actions in Ukraine. At a strategic level it was a disaster, for Ukraine and for Russia.

SPIEGEL: If you had the chance to bring down Russian President Vladimir Putin with leaked documents, would you do it?

Assange: We don't publish documents to bring people down. If the documents were authentic, we would publish them. We do not accept censorship. We think freedom of information is what human civilization needs in order to be just and equitable.

SPIEGEL: You don't believe there are any limits to transparency?

Assange: That's not a question for WikiLeaks. That's a question for society. Each organization has its own role. Police have a role in stopping the mafia. Media has the duty to tell people the truth. That's our primary role. Not censorship.

SPIEGEL: Do you not think there is a danger that an anonymous source could instrumentalize WikiLeaks?

Assange: Certain media groups have tried to say that in order to excuse themselves for their lack of success and their relatively poor output. Meanwhile many newspapers and magazines have copied WikiLeaks and are offering the possibility of delivering documents anonymously. WikiLeaks publishes harder than anyone else. WikiLeaks is successful through its commitment to its values and through its robustness in the defense of its sources. That attracts sources.

SPIEGEL: What do you make of the global "WannaCry" attack?

Assange: The American National Security Agency, the NSA, built a giant stockpile of digital weapons, but lost control of it in 2013. The NSA, though, did not inform Microsoft and other companies so that they could fix their programs, for which the NSA had attacking tools.

SPIEGEL: Do you think worse is yet to come?

Assange: There are serious questions to be asked: Did the NSA and CIA conceal the fact that they lost control over most of their cyber weapons or did they inform president Obama and his administration? Following the Edward Snowden revelations, the U.S. government promised they would not hoard these vulnerabilities but inform IT corporations so they could fix vulnerable software. It turns out that that was a lie. Another important question is: What liabilities does the NSA bear for the damage the "WannaCry" attack has caused around the world?

SPIEGEL: Mr. Assange, we thank you very much for this interview. 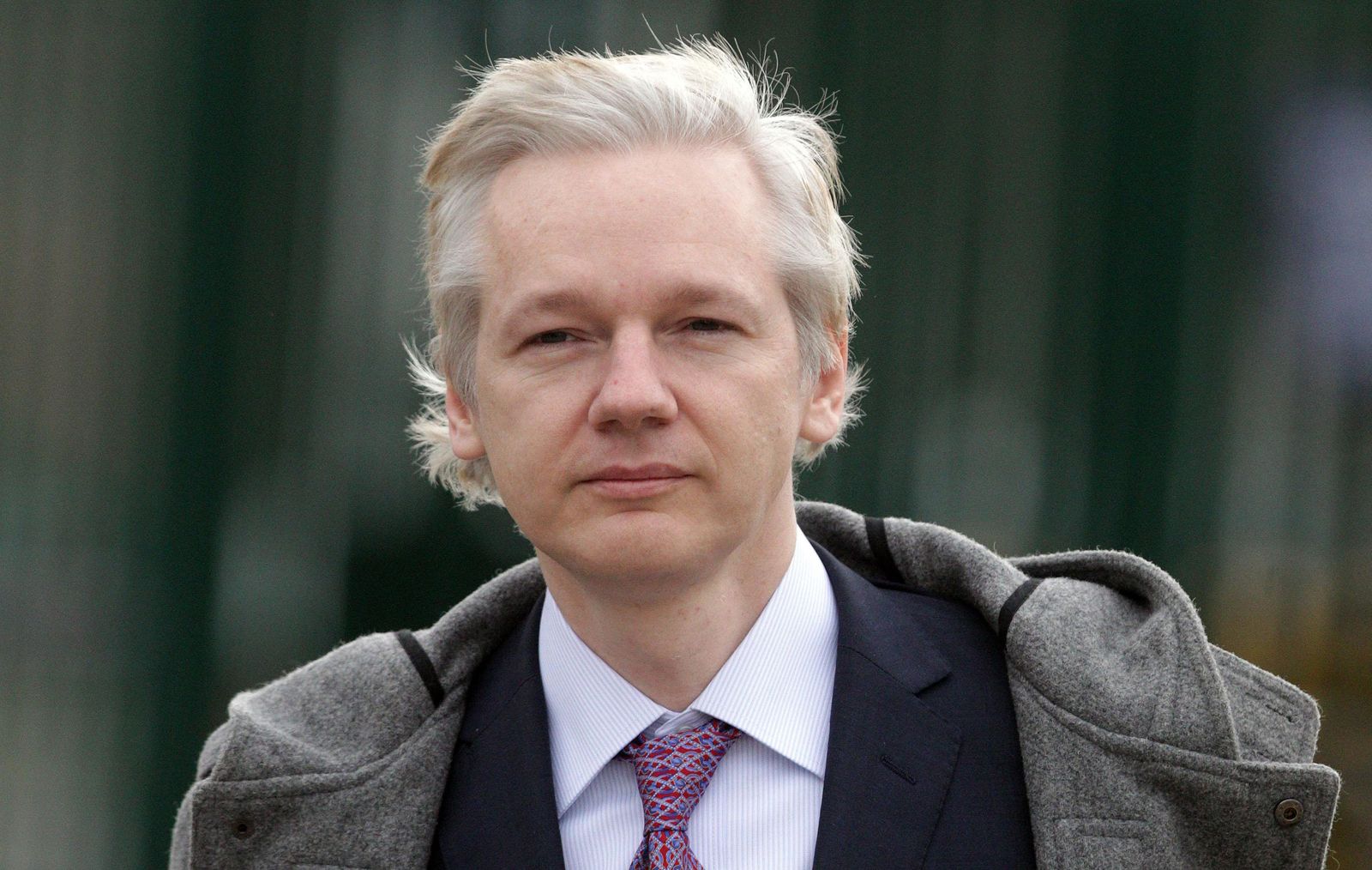