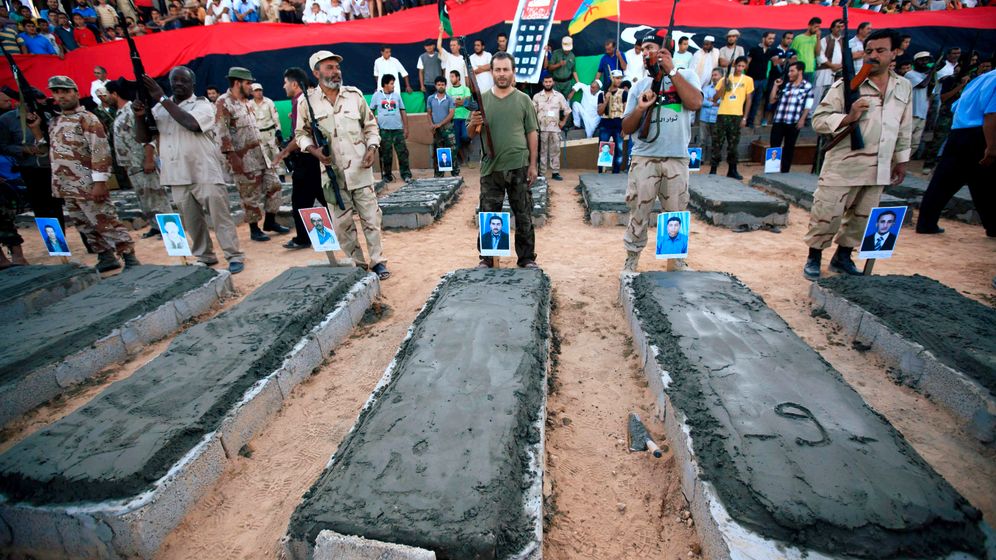 He spent six days trying to find the man who had shot and killed his brother. On the seventh day, he tracked him down, dragged him into his car and pressed a Kalashnikov against his forehead. "I would have pulled the trigger," says Taha al-Tahib, 26. "Luckily," he says, his friends pulled him away.

Taha al-Tahib dropped off his prisoner at one of the many makeshift prisons, where thousands of former Libyan leader Moammar Gadhafi's soldiers, torturers and alleged mercenaries from Niger, Algeria and Chad are now being held. But first he beat the man and extracted names from him, names of other thugs who had worked for the Gadhafi regime, of military commanders and arms suppliers. Now he regularly patrols the city, searching for the men.

"Many have gone into hiding or have joined the rebels," he says. "But I want to get them. All of them!"

Taha al-Tahib, a broad-shouldered man with a fresh scar on his back, is sitting in his parents' living room, his Kalashnikov leaning next to him. His mother has laid out what is left behind from his brother Faruk, who was nicknamed Fuka: a bloody pair of jeans, sneakers and sunglasses. Fuka ran a small butcher shop and had just completed a computer course. He believed that the revolution marked the beginning of a new life.

The family still has big plans, even after Fuka's death. Taha hopes to start a construction company, and his mother Leila wants to design clothes. She once owned a tailor shop with 25 seamstresses, but she had to shut down the business. "As soon as you made money," she says, "they would try to extort as much of it from you as possible."

On August 23, Fuka and Taha watched on television as the rebels captured Bab al-Azizia, Gadhafi's military compound in Tripoli. They grabbed their assault rifle and the rebel flag and got into their blue VW Golf. A few hundred meters from the house they were stopped at a checkpoint, one of the last remaining holdouts of Gadhafi's troops in a liberated Tripoli. Most of the other soldiers had already surrendered, but these men were still fighting. The soldiers saw the rebel flag and opened fire.

Taha jumped out of the car and hid behind a fence. A bullet grazed his head and another his neck, and then he was hit in the back. His brother, though wounded and still lying in the car, was shooting at the soldiers. When Fuka ran out of ammunition, a soldier shot and killed him.

Taha, from his vantage point behind the fence, took a good look at the soldier's face.

He later recognized it when he was passing through another checkpoint, not far from the spot where his brother had been killed. This time the soldier was helping the rebels check vehicles. Like thousands of others in Libya, he had switched sides.

They include police officers in white uniforms who are now trying to direct traffic again, and bureaucrats who are back behind their desks. Even generals and some members of the intelligence agencies have reportedly joined the rebels. Many of them are welcomed because there is no one who could replace them anytime soon.

Abdul Majid al-Doursi, a former director of state television who was, until recently, in charge of handling and monitoring foreign journalists, is thinking about starting a media company. Mohammed Layas, the former head of the corrupt Libyan Investment Authority, which is worth more than $60 billion (€43 billion), is now the chairman of its supervisory board. And Khalid Kaim, the former regime's deputy foreign minister, now goes on television to announce, with a smile, how sorry he is that he ever said anything disparaging about the rebels, and that he now wants to be part of the revolution.

When Mahmoud Jibril, the head of the transitional government, appeared in Tripoli last Thursday, he said: "Our greatest challenges still lie ahead. The first is that we must prevail against ourselves. The second is the ability to forgive and reconcile, and to look to the future."

Fear of Becoming Another Iraq

Everyone is talking about reconciliation now. Many fear that the country could break apart like Iraq, where thousands of members of Saddam Hussein's Baath Party were thrown out of office and joined the insurgency.

But how can a country come to terms with 42 years of a dictatorship to which almost everyone who wasn't put in prison contributed? Who should be convicted and who should be spared? Where does evil reside in a dictatorship, in the mind of a civil servant sitting at a desk, or in the hands of a soldier wielding a gun? While some argue over these questions, others are taking the law into their own hands.

Revenge killings are being committed -- not as many as in Baghdad eight years ago, but even in Tripoli the rebels are patrolling the streets at night, searching apartments and arresting people. They write reports and gather evidence, but the concept of presumed innocence is foreign to them. They are angry, and their anger is directed at those they suspect worked as soldiers and informants for the Gadhafi regime. But can someone like Taha al-Tahib be certain that he beat up the right man and took him to prison?

The man's name is Walid al-Khair. He is 29 and was a soldier in the Khamis Brigade, the most feared unit in Gadhafi's army. He fought in Misrata, but then he was wounded and sent back to Tripoli. Today, he is locked in a cell in the Sarraj neighborhood. The rebels are not allowing him to see anyone.

Tracking the story of Walid al-Khair leads one to a rough-looking apartment block in the Akwakh neighborhood in Tripoli. Khair's building is only a few hundred meters from that in which Taha al-Tahib lives, and yet it is worlds away. Piles of garbage are on fire, and construction workers from Bangladesh are living in containers set up between the apartment houses.

"You're rats!" a woman hisses from a window on the ground floor. It is a word Gadhafi has used to describe the rebels, even as recently as last Thursday during a broadcast audio message.

Walid didn't kill anyone, says his brother Adil, 31. Sitting in the stairwell in front of his apartment, he sums up Walid's life in a few words: nine years of school; training with the Khamis Brigade; €230 in pay a month. "What else could my brother have done?" he says. "His only choice was to join the army."

His mother, her headscarf tied under her chin, holds a photo of Walid: a serious and shy-looking man in a sweater, holding his nephew on his knee. When asked about the future, she says: "We want to live in peace with the rebels."

But the family still supports Gadhafi. "I love our leader," says Adil. "I hope he will stay in power forever." But now he is afraid, not knowing what to think of the sudden shift in circumstances. "It used to be safe," he says. "We could go anywhere. I could do as I pleased. That was freedom."

Breaking Down Past Barriers

His neighbor, Mustafa al-Jareed, 25, is sitting on the stairs next to him.

"But listen," says Jareed, "under Gadhafi we had people who were above the law. They could do as they pleased, and they got rich. And you? You're still poor. Now you can do something about it. You can vote. That's freedom!"

Then he looks at his neighbor and says: "If I had said that before, you would have reported me. We never talked like this. And we've been neighbors for more than 20 years."

Adil al-Khair says nothing. He still believes Gadhafi's promises, even though he earns only €350 a month as a driver and his family has remained poor.

When Khair has left to join his mother in the apartment, the neighbor says: "He's lying. His brother had been patrolling and fighting for the Khamis Brigade in Tripoli since early August. I saw him with his weapon. He stole TV sets." Walid was a pothead, says the neighbor, and perhaps he was simply too stupid to recognize that his world was lost. "The others in his brigade all fled to Tunisia."

'He Wanted Us to Need Him'

Taha al-Tahib says that when he was beating Wahid al-Khair, and he was lying on the ground in front of him, he apologized. "He said that he was forced to do it," says Tahib. "But others deserted, and some deliberately shot themselves in the foot to avoid having to fight. He didn't."

"Why did you keep fighting?" Taha al-Tahib asked the soldier, but he only shrugged his shoulders. Tahib says that he feels sorry for the man. "He is uneducated, almost illiterate," he says. "Gadhafi made sure that we all remained uneducated. He wanted us to need him."

Taha al-Tahib doesn't know what will happen to Khair now. Justice, he says, by which he means a fair trial, judges, witnesses and a prison where he will have rights. But is it possible to learn about justice in such a short time?

A prison similar to the one where Walid al-Khair is being held has been established in the Souq al-Juma neighborhood. Some 60 men sit on the floor in two small rooms in the building, a former school. Half of them are non-Libyan Africans. The rebels call them "mercenaries," but their evidence often consists of nothing but a video taken with a mobile phone, a weapon one of the men was carrying, or a passport entry stamp dated June or July. Many of them are probably ordinary guest workers. Visitors are allowed to talk to them, but not alone.

And when we do start talking to the prisoners, a rebel named Fathi Misbah immediately appears with his Kalashnikov and tries to control the conversation.

"Are we treating you well?" he shouts.

"Yes, very well!" they shout back.

"Do you get dinner?"

"Do you have your rights?"

What happens next? That's easy, says Fathi Misbah: "The guilty go on trial, and we let the innocent go free."