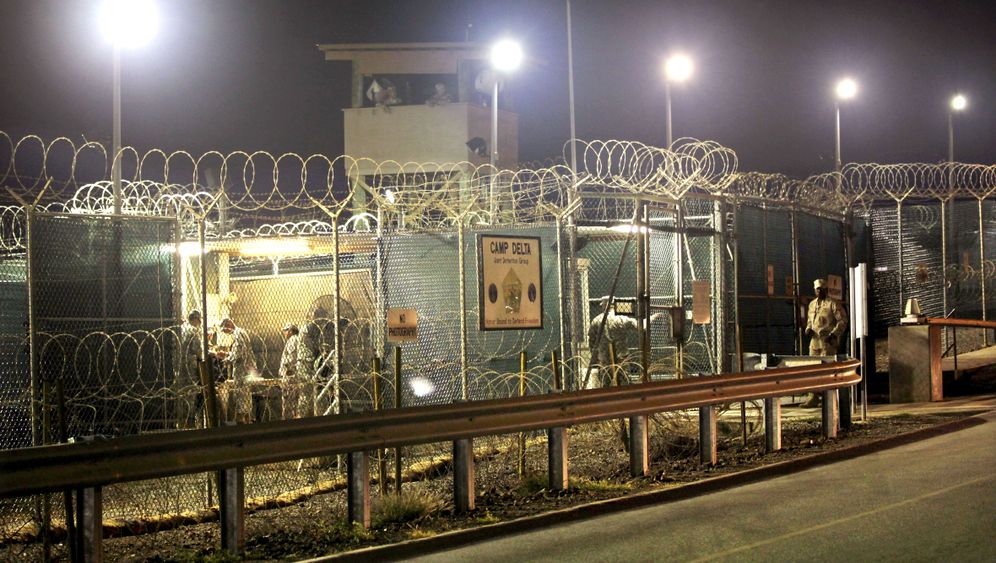 Photo Gallery: The Shortcomings of Guantanamo

There was a champagne brunch at the US military's Bayview Restaurant in Guantanamo on Easter Sunday -- $14.95 a person, with a view of the bay included. Before the brunch, the soldiers' families met for an Easter egg hunt on the golf course, near the white officers' houses with their manicured front lawns. Inflatable castles were set up for the children.

On weekends like this, Guantanamo looks relatively normal. Residents can take snorkeling lessons or attend a picnic on Windmill Beach, which, like the 10 other beaches on the base, is equipped with volleyball nets, showers and barbecue stations.

It is a place that has become a symbol worldwide for the failure of a modern constitutional state -- and its weekend activities are reminiscent of a Mediterranean resort hotel. The military base has one of the best funded programs for "Morale, Recreation and the Common Good," including a range of activities more commonly found at a Club Med, like Pilates and belly-dancing lessons, angling, paintball and Ironman competitions.

According to the Joint Task Force Guantanamo's Facebook page, "it's never hard for Guantanamo residents to have fun while keeping in shape." The Guantanamo Triathlon, in which contestants swim 180 meters (200 yards), bike 16 kilometers (10 miles) and run five kilometers, was held in April. The winner was Tom Fisher of the Coast Guard Running Club, with an outstanding time of less than an hour.

Better Staffing than a Five-Star Hotel

There are precisely 172 detainees still being held at the prison camp in the Caribbean, down from a one-time high of 779. About 30 of them are likely to be put on trial, and there are an estimated 49 that the Americans would prefer to lock up for life without trials. The rest could be released -- if there were countries willing to accept them.

The Joint Task Force has 1,300 soldiers working at Guantanamo, a staffing level that exceeds that of any five-star hotel. The trial of Khalid Sheikh Mohammed and Ramzi Binalshibh, the two masterminds of the Sept. 11 attacks, along with three other prisoners is set to begin this year. The date hasn't been scheduled yet.

In early April, US Attorney General Eric Holder announced that the 9/11 trials would take place before the controversial military tribunals in Guantanamo after all, and not before a US federal court in New York, as had previously been planned. The change came at the behest of Congress, which refused to allow the trials in New York.

That, though, was the last that was heard from Guantanamo -- until last week, when 765 classified documents from the prison camp were published. The whistleblower website WikiLeaks had made the documents available to the international media, including SPIEGEL.

The documents, so-called "Detainee Assessments" from the years 2001 to 2009, encompass several thousand pages and disclose countless new details on the whereabouts of the al-Qaida leadership since Sept. 11, 2001, as well as information about plans for further attacks.

Most of all, however, they draw a devastating picture of the treatment of evidence and witness statements at Guantanamo. The documents show that suppositions and statements from anonymous sources are repeatedly treated as incontrovertible facts. There is nothing to indicate that there was any effort to separate facts and rumors. "The documents are evidence of ignorance, incompetence and arbitrariness. Guantanamo comes across as the Kafkaesque machinery of suspicion," says Bernhard Docke, the attorney of former Guantanamo detainee Murat Kurnaz.

The problem at Guantanamo was the mingling of intelligence activities and prosecutors' investigations, says military prosecutor Stuart Couch. "Prosecutors need historical facts as evidence to prove who did what and when," Couch said at a speech at Berlin's Humboldt University. "If that 'evidence' is obtained by coercion applied during the intelligence-gathering process, there is a huge risk that, at best, the prosecution's case falls apart or, at worst, an unjust conviction can occur."

The documents clearly show that the Guantanamo system could only sustain itself with continuous overstatement. How else is it possible that prisoner number US9CD-000269, Salih al-Qarani, is described in his file as an active member of a London al-Qaida cell, even though, as his attorney has demonstrated, he was only 11 at the time of his suspected terrorist activities?

And how is it possible that another document refers to a "Bremen cell," something German authorities have never heard of? The interrogators also failed to protect the detainees against false statements by other prisoners. In fact, they willingly included them in their dossiers. "There were several cases in which incriminating statements were made by inmates known to be unreliable," says the former chief prosecutor at Guantanamo, Morris Davis, who has since resigned.

As the detainee assessments show, the allegations against 255 prisoners are based solely on the statements of eight fellow prisoners. The credibility of these "turncoats" was apparently never questioned.

The interrogators also did not protect the detainees against themselves, as in case of Ahmed Rachidi, a Moroccan who once lived in London. When asked whether he knew al-Qaida leader Osama bin Laden, Rachidi, who is manic-depressive, replied that he had worked for Osama and that he, Rachidi, had been the "general." Rachidi, who was treated at London mental institutions in the past, also said that a snowball would soon swallow the Earth.

The documents indicate that the investigators knew about the man's condition since 2002 and that he had even received treatment for it -- and yet they kept him in Guantanamo for another five years. According to the 2004 risk assessment, he was classified as a "high-risk" threat. The Guantanamo interrogators apparently ignored the fact that throughout the time he was supposedly in Afghanistan, learning how to make bombs, Rachidi had actually worked as a cook in London restaurants, including the Hard Rock Café.

Cooking for the Jihad

Statements by the architect of the 9/11 attacks, Khalid Sheikh Mohammed, who proudly told his interrogators about many other attack plans, seem much more credible. One of his plans was to attack London's Heathrow Airport with an airliner, while another aircraft, with two "shoe bombers" on board, was to be flown into the tallest building in California. Mohammed also had plans to strike the White House and the headquarters of both the CIA and the FBI. Other plans involved cutting the steel cables that support the Brooklyn Bridge in New York, crashing an aircraft into a US warship in the port of Dubai and unleashing a "nuclear inferno" in the United States.

In late 2001, Mohammed appeared to be intoxicated by his own success. In November 2001, the entire al-Qaida leadership met in Zormat, an Afghan region bordering Pakistan. Binalshibh, the 9/11 coordinator, was also at the meeting, as were a few of the fighters, who were apparently waiting for the documents they needed to flee the region. The terrorists discussed attack plans, the division of tasks and attacks on US facilities in Saudi Arabia.

After the meeting Binalshibh traveled to Kandahar, where he met senior al-Qaida member Saif al-Adl, who was partly responsible for the 1998 attacks on US embassies in West Africa. Adl drafted the 9/11 coordinator into kitchen duty, and for the next two weeks Binalshibh helped out in a field kitchen to supply food for al-Qaida fighters on the front.

Apparently even the life of a successful jihad fighter isn't always easy.