Even before the official election results were announced, supporters of Rwandan President Paul Kagame were already cheering his victory. For two nights they celebrated the triumph of their idol in Monday's presidential election, a win that had never been in question.

On Wednesday the official results were finally announced: Kagame had attracted 93 percent of the Rwandans' votes. It was an impressive victory in an election which, in reality, provided little choice.

Kagame had faced three relatively unknown candidates, all more or less linked to the president. The real challengers were either dead, in prison or sitting at home watching the election from their sofas.

One possible challenger might have been André Kagwa Rwisereka, the deputy leader of the Green Party, but he was found murdered in the middle of July. His party had already been excluded from the election, as had the UDF (United Democratic Forces), the party of 46-year-old Victoire Ingabire. She was one of Kagame's most dangerous opponents, but shortly after returning from exile in Holland she was detained and placed under house arrest. Kagame had publicly called her a "hooligan" and claimed she was backed by foreign critics of Rwanda.

'We Are a Country in Motion'

The 52-year-old Kagame will now lead the country for another seven years. He will hope to build on the successes of his previous term which included: rapid economic growth; a booming capital in Kigali; an agricultural system that produces goods for export; a population in which 90 percent have health insurance; and a markedly improved school system.

"We want to establish Rwanda as a service platform," says Deputy Finance Minister Pichette Kampeta Sayinzoga, who dreams of seeing her country compete with the Kenyan capital Nairobi as the region's conference and service provision hub.

Sayinzoga is one of the many women that give Rwanda its strength. The clever and ambitious 29-year-old studied in South Africa, Belgium and England, and was supported by a government that seeks to promote talent. Like many of her compatriots, Sayinzoga decided to return from abroad, despite promising career prospects in Europe or America. "We are a country in motion," she says. "Rwanda is a brand and we are moving forward."

Her success story is the product of a government that has clearly defined goals. It wants to get away from development aid, from donations and gifts. Many African countries have become geared to a cozy global system of give and take. The regular arrival of aid from abroad has become a matter of course. Yet, Rwanda yearns for something different. "We want to get people out of poverty and get them paying taxes," she says.

Word of such dynamism spreads fast. African neighbors like Kenya also regard Rwanda as a "model state," while the World Bank declared it to be the "top reformer country" of 2009. Kagame even received the Energy Globe Award recently for his environmental work. Hardly any other African nation receives as much aid per inhabitant as Rwanda.

And the president, a man who has been known to get out of his car to pick up litter, continues stubbornly on his course. He has set agreed targets with 30 district leaders on the construction of schools, hospitals and roads, and the results are reviewed annually. Anyone who has not delivered has to have a good reason for the delays -- or they are out of a job.

Such stringent oversight has made the job a difficult one. Of those original 30 district bosses, 26 have already been replaced and it has become difficult to find new applicants for a position that was once so coveted.

Another huge challenge is the issue of over population. Seven million people lived in Rwanda before the genocide reduced the population by almost one million. Today the country has close to 11 million inhabitants, and the challenge of curbing this population growth is one of Kagame's most pressing tasks.

For all that this former officer and intelligence agent works hard at pushing his country forward, he has little interest in freedom of opinion or democratic rights. He has no problem banning newspapers, journalists occasionally disappear and even critics living abroad can no longer feel completely safe.

'We Have a Particular History'

Kagame does not dispute the fact that there has been a heavy price to pay for his success and that Rwanda is still far from a functioning democracy. "Of course we are operating under a principle of 'trial and error'" he says in his presidential palace in Kigali. He speaks quietly, with concentration and self confidence. "But we have a particular history. Perpetrators and victims live close together. And reconciliation takes time."

He rejects those abroad who try to tell him what to do. "Where was the West, where was the United Nations, when the genocide began in 1994?" As rhetorical as that question may seem, the message is clear: Rwanda does not need the West and donor countries lecturing it. Instead, he defends his restrictive policies by pointing to his country's past. He believes that the continued differences and animosities between the Hutu and Tutsi people can only be overcome through growth and prosperity. While democracy, human rights or freedom of opinion are important, Kagame has other priorities: First peace and growth, then freedom of expression and human rights.

Hutus and Tutsis Have Not Forgotten

And there are indeed still deep rifts in Rwanda. The state-ordered reconciliation, a term neither the Hutus nor the Tutsis use, has not really worked almost a generation after the mass killings led by Hutu militias of over 800,000 Tutsis and moderate Hutus in 1994.

Neither the victims nor the killers have forgotten. During commemoration events in April to mark the anniversary of the start of the genocide, a film was shown in a packed stadium in Kigali, showing the killing of youths who had opposed the selection of Hutus and Tutsis. Dozens of hysterical screams could be heard from the crowd. Meanwhile, not so long ago an anonymous caller to a radio station commented that: "It is a pity that we did not finish our work." There was widespread outrage across the country and the caller was later identified and arrested.

The Tutsis still remember how marginalized they had been before 1994. It was difficult for them to attend schools and they were forbidden from going to university or working for the state. They remember the first wave of violence against the Tutsis in 1959 and the subsequent discrimination they suffered.

The Hutus, for their part, have not forgotten how Kagame's rebel group the FPR (Rwanda Patriotic Front) displaced hundreds of thousands of Hutus during the civil war of 1990 to 1994, or that the FPR also committed massacres, which were neither punished nor even described as such. And, of course, moderate Hutus are not pleased when the "genocide against the Tutsis and moderate Hutus," as it was long known was renamed "genocide against the Tutsis" around a year and half ago by the government. There is seldom any mention by officialdom of Hutus as victims, despite the fact that tens of thousands were also killed.

There are other ways that the government has eroded its popularity. It replaced French with English as the country's official language. A lot of teachers are not able to educate their students properly because they are not used to speak the new language. And a great number of cities and districts were renamed, in particular those with large Hutu populations. Farmers have been forced into collectives in order to increase production. And while the harvests have improved, this has not gone down well with the rural population, which is predominantly Hutu. Nor are they impressed by being told how to use their own land. For example, an order not to plant bananas in some districts enraged small farmers who had been able to earn quite a bit of extra income by brewing banana beer.

Tensions Within the Army

"The strict regulations are of no use to the people," says Faustin Nyombayire, the rector of the Catholic University in Byumba. "People mostly live from what they grow themselves," he says. Now while there is more production and more exports, "hunger has increased."

There are also tensions within the army. For many years the military was Kagame's main backer. But the president now senses danger and treachery within its ranks. He demoted several generals shortly before the election, while others have fled abroad. One Rwandan general, who is also head of the country's football association, was arrested as he was about to travel to South Africa to attend the World Cup. He was accused of having failed to give notice of his departure. Another two former military officials were accused of masterminding a string of grenade attacks in Kigali earlier this year. One of them was shot and seriously wounded in Johannesburg in June.

Kagame may have won the election convincingly but he is still not completely certain of the loyalty of his people. The fact that a bomb blast killed six people in Kigali on Wednesday night during election victory celebrations points to just how unstable Rwanda's future might be. 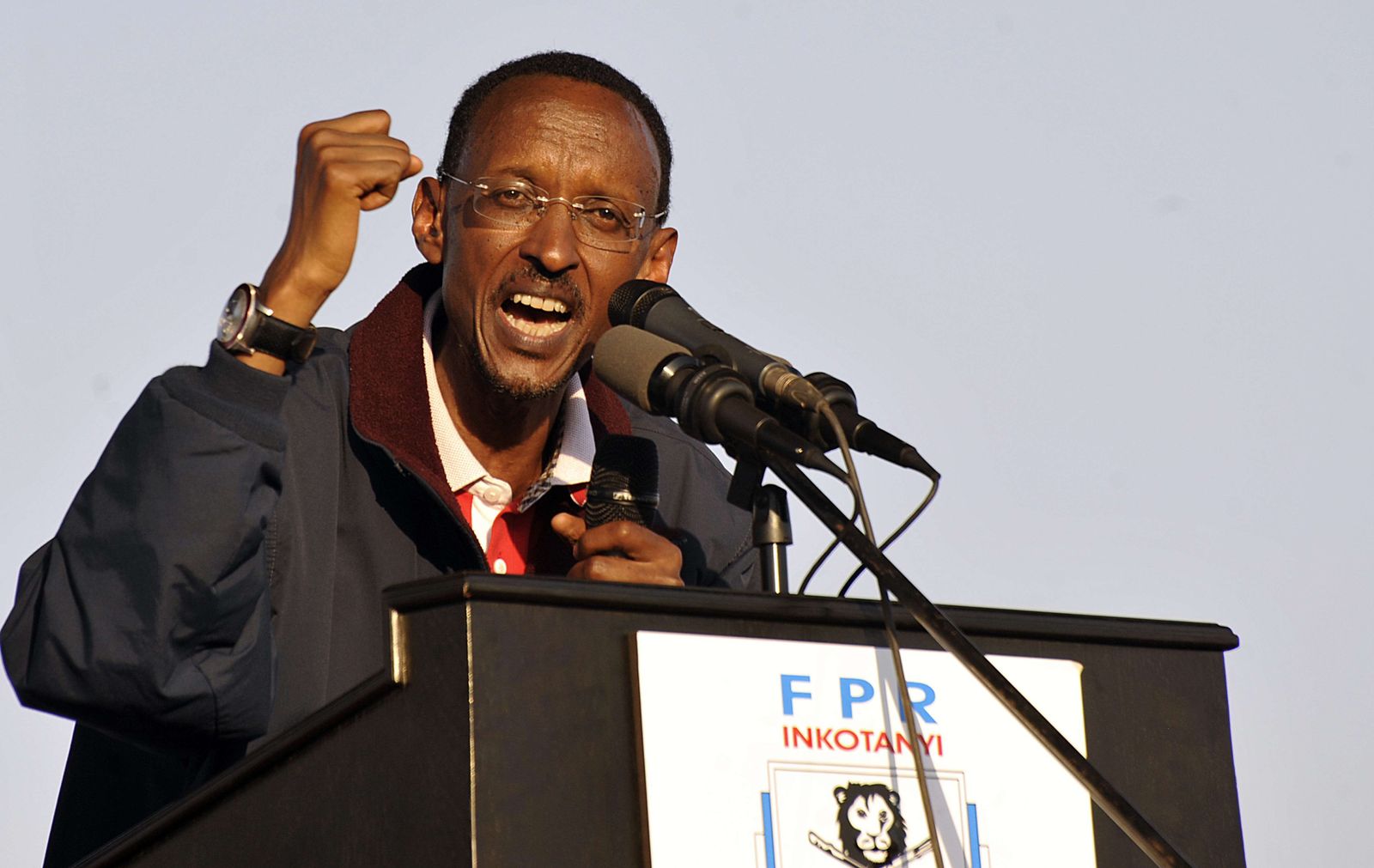