DER SPIEGEL: Mr. Rove, you wrote a book about William McKinley, the 25th president of the United States. In it, you describe him as a politician who modernized the Republican Party at the beginning of the 20th century. McKinley welcomed the influx of new immigrants and tried to unite the U.S. after the Civil War. Is it fair to say that McKinley is the opposite of Donald Trump?

Rove: Well, I'll leave that up to people to figure out. McKinley was a man of enormous character and integrity, which won him bipartisan respect. He demonstrated a willingness to buck his party on the issue of immigration, particularly in supporting the entrance of Catholics from Italy and Eastern Europe. The largest pressure group at the time was an anti-Catholic group called the American Protective Association. In 1896, they declared that McKinley was the only Republican candidate for president who was unacceptable to them. It was because when he ran for re-election as governor of Ohio, they had found out that there were prison guards at a state prison who were Catholics. The APA demanded that McKinley fire them, and he refused. So, they took him on in the 1896 election, but he overcame their opposition and won the nomination. He retaliated in a way by having the opening prayer at the Republican National Convention in St. Louis issued by a rabbi. The second day, it was an African-American preacher who gave the prayer.

DER SPIEGEL: Why did he do that?

Rove: McKinley was a reformer, and he recognized that the country was changing. It was becoming more urban. America was accepting more immigrants. It was almost scandalous because the Republican Party in the North was the white Anglo-Saxon Protestant party, and here's a guy who's the first Republican presidential candidate to be endorsed by figures in the Catholic hierarchy.

Karl Rove (pictured here in 2007 with then-President George W. Bush) was long regarded one of the most successful and controversial strategic advisers in American politics. He helped George W. Bush rise first to become governor of Texas and later the 43rd president of the United States. Under Bush, Rove served as deputy chief of staff in the White House. Today, he writes books and serves as a columnist for the conservative Wall Street Journal.

DER SPIEGEL: In your book on McKinley, you write that politics is based on creating the broadest voter base possible. You call it the "play of addition." But in the 2016 election, Donald Trump played, if you like, the game of subtraction. He focused on white working-class voters. Nevertheless, he won. Why?

Rove: Because he added blue-collar, non-college graduates to the Republican coalition, winning Pennsylvania, Michigan, and Wisconsin. He got people who live in Kenosha and Allentown and the suburbs of Detroit who are nominal Democrats but could not bring themselves in 2016 to vote for Hillary Clinton to vote for him. Now, the other part of that equation is that, in those three states, Clinton turned off parts of the Democratic coalition. Trump was given his moment when people said, "If I'm a blue-collar, working-class person who lives between the coasts, I don't think I'm being respected. Hillary thinks I'm deplorable, and then the guy before her (Obama) talked about me clinging to my religion and my guns."

DER SPIEGEL: After Barack Obama defeated Mitt Romney in the 2012 presidential election, the consensus among Republicans had been that party had to focus harder on attracting non-white voters. Given the outcome of the 2016 election, was this analysis wrong?

Rove: No, not over the long haul.

DER SPIEGEL: Then why is the Trump campaign once again focusing on white voters?

Rove: Look, I'm not their spokesman. But they will make the argument that they can do marginally better in the African American and Latino communities because of the good state of the American economy. We have the lowest unemployment rates among African Americans and Latinos since we began breaking those statistics out by race in 1948.

DER SPIEGEL: One parallel between the age of McKinley and today is that a deep divide runs through the U.S. What, in your view, are the reasons for that?

Rove: It's interesting. We were going through a moment of populism back then, and we're going through a moment of populism now -- and both had their roots in the divide between the have-nots and the wealthy. The crisis of the 1870s and '80s was marked by the conflict between debtors and savers. People who had money and saved it were better off than people who had mortgages and borrowed money. In that era, it led to the creation of the Populist Party, but inside the Democratic Party. This time, the 2008 financial crisis led to a populist impulse inside the Republican Party, as well.

DER SPIEGEL: You have spent your whole life in the mainstream of the Republican Party. Given all the scandals surrounding Donald Trump, how can someone who truly believes in values like family and integrity support him?

Rove: Well, I run into this a lot. People will come up to me in airports and say, "I see you on Fox News. I read you in the Wall Street Journal. I really like what Trump is doing. I like the (conservative) judges (he appoints). I like the tax cuts, the strong defense." And I say: And what about the tweets? The answer is: "Oh God, I wish he'd stop tweeting." We are at a tribal moment. If you attacked Obama when he was in office, Democrats would leap to his defense. Today, you'll notice there's a lot of disquietude being expressed about his years in the White House. He wasn't liberal enough. He didn't press far enough. But the Democrats weren't saying those things when he was in office, because, by God, if you're attacking my leader, I'm going to stand with him firmly. Same with Trump.

DER SPIEGEL: Is Trump's crude language on Twitter a means for keeping his base happy?

Rove: Yeah, it is, but American elections are won by the voters who swing from side to side. Now granted, there aren't a lot of them today. When you're talking about the Nixon and Reagan elections, you're talking about a time when a third of the electorate was up for grabs. This election, it will be 8 or 10 percent. But therein lies the difference between winning and losing.

DER SPIEGEL: What will the Republican Party look like after Donald Trump?

Rove: You know, we had Reaganism -- an optimistic, sunny, conservative philosophy that a lot of Republicans today still identify themselves with. What's going to be interesting to see in the decades ahead, is whether Trump has made the Republican Party into a populist party tinged with nationalism and occasional alt-right sympathies, and anti-immigrant and anti-Muslim attitudes? Or whether people turn not back to the old conservatism but design something new that looks a little bit like today and a little bit like Reagan, but it's something new.

Rove: I think that happens, because populism is not sustainable over the long haul. We saw the populism of President Andrew Jackson, but it receded quickly. And then we have the populism of Trump today, but I don't see a ready heir. Is it Vice President Mike Pence?

DER SPIEGEL: Your analysis of the situation among the Republicans has been the same for years: The party will need to widen its voter base if it wants to assert itself in a country where whites are increasingly in the minority. But doesn't that also mean that the Republicans are doomed if they continue to follow Donald Trump's path?

Rove: Well, I don't know. We won't die. We'll lose and then we'll change. That's one of the strengths of our two-party system. These two parties (the Democrats and the Republicans) are broad coalitions, and if they start to lose, they wake up and say, "We've got to do something different."

DER SPIEGEL: Who is the Democrat with the best chances of defeating Donald Trump?

Rove: My personal view is that Joe Biden is the most dangerous of the Democrats if he could win the nomination. He's a little goofy, a little weird. He can't put two sentences together, but he's sort of a normal Democrat. He could stand up and take back that 8 to 12 percent of the vote that will decide the election. The voters could look at him and say, "Look, our country will be OK with him as president. Uncle Joe can do that."

DER SPIEGEL: Can a moderate conservative like you seriously vote for Donald Trump in 2020?

Rove: There are conservatives in Britain who don't like what Boris Johnson is doing, but when they look at a socialist like Jeremy Corbyn, they know it will be worse. Same here. The Republican base will be strongly with Trump. And some voters who are up for grabs in 2020 can bring themselves reluctantly to vote for him because they think that Elizabeth Warren or Bernie Sanders are worse. And they are. 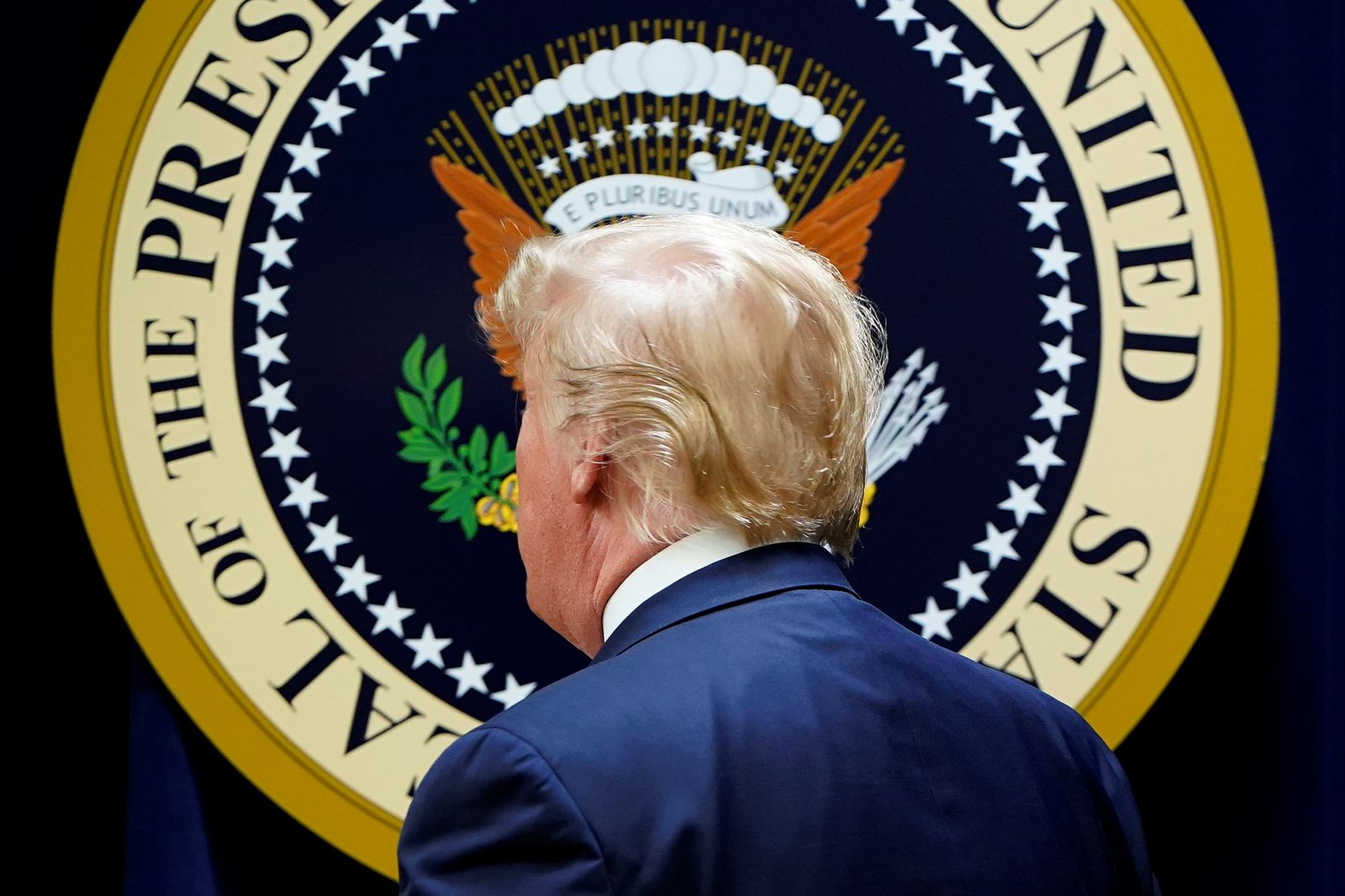 Karl Rove: "The Republican base will be strongly with Trump."