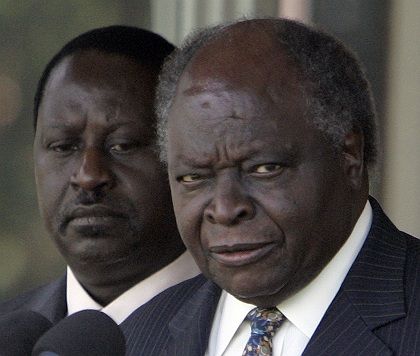 Kenya finally has a new government, three and a half months after disputed elections led to fierce riots and violence that claimed the lives of up to 1,500 people.

On Sunday, President Mwai Kibaki appointed his rival Raila Odinga to the newly created post of prime minister. Kibaki also announced the new cabinet with 40 ministries split evenly between his own Party of National Unity and Odinga's Orange Democratic Movement.

The power-sharing deal, which gives Kenya both a president and prime minister for the first time, was brokered over a month ago by former United Nations Secretary-General Kofi Annan. However, tough negotiations over the makeup of the cabinet delayed its implementation. Last week, Odinga threatened to withdraw from the process, while unrest broke out in Kenya's largest slum, Kibera, scene of some of the worst violence in January and February.

Legally the new coalition should last until either the term of the current parliament ends in 2012 or a new constitution is enacted. However, either side can end the partnership at any time, and there will be intense scrutiny of the relationship between Kibaki and Odinga, particularly on how much power the new prime minister can wrest from the traditionally powerful president. The huge size of the cabinet has led to criticism that it will suck up vital resources and make the government unwieldy. "It's laughable that a country like ours, that needs to move forward yesterday, will spend so much money on the cabinet," Koki Muli of the Institute for Education in Democracy told Reuters.

On Monday, it became clear just how fragile political stability in Kenya is when members of the Mungiki gang, an outlawed quasi-religous sect, clashed with police and blocked roads in both the capital Nairobi and the Central province. At least seven people were killed in the violence that broke out after the gang accused police of being behind the murder of the gang leader's wife last week.

Riots and ethnically motivated killings erupted in the aftermath of the Dec. 27 vote, when Odinga accused Kibaki of rigging his re-election as president. The ensuing violence uprooted more than 300,000 people and undermined the economy, and Kenya's image as a stable tourist destination and trade hub was shattered.

The United States welcomed Kenya's new government on Sunday, calling it an "important first step" toward solving the country's political crisis. State Department spokesman Sean McCormack praised the two leaders for "making the courageous decisions necessary to move the nation forward." He called on them to "maintain momentum by moving quickly to carry out institutional reforms, particularly with respect to revision of the constitution, reform of the electoral process and land issues."

In a televised speech on Sunday, Kibaki urged his new ministers to put their differences behind them. "Let us build a new Kenya where justice is our shield and defender and where peace and liberty and plenty will be found throughout the country."