They had already started furnishing their apartment, a four-room, 160-square-meter (1,700-square-foot) flat in Istanbul. The bed had been purchased, along with the black, leather easy chair that Jamal Khashoggi had wanted. Khashoggi and his fiancée had wanted to pick out a washing machine and a stove on an afternoon in October 2018. But first, Khashoggi had an appointment.

"Where?" Hatice Cengiz asked her future husband. "At the consulate," Khashoggi responded. The couple wanted to marry as quickly as possible, but in order to do so, they needed a document -- a certificate that Khashoggi was unmarried. And only an agency from his homeland could issue such a paper. Khashoggi was born in Saudi Arabia, while his fiancée is from Turkey.

At 10 a.m., Khashoggi called the Saudi Arabian consulate to tell them he was on his way and he was told to come in three hours. "They had enough time to prepare everything," says Cengiz. "And then they killed him."

Cengiz, 37, is sitting on the terrace of a café in London, where she now lives. She presses her lips together, her arms crossed in front of her chest. Her body is tense, as if preparing to fend off an attack. Cengiz doesn't want to talk about the day when Jamal Khashoggi was murdered. She wants to forget what happened and start a new life. But she can't.

"If I stop talking about Jamal, his death will disappear from the agenda," Cengiz says. So she is talking -- over the course of several days. She trembles from the exertion and sometimes tears start streaming down her face. But she refuses to break off the conversation. "I am doing this for Jamal," Cengiz says.

Jamal Khashoggi was one of the best-known journalists in the Middle East. On Oct. 2, 2018, he entered the Saudi Arabian consulate in Istanbul to pick up the document he needed to marry Cengiz. He didn't come back out alive. Investigators believe he was suffocated by a Saudi Arabian hit team before being dismembered.

The death of the journalist was so brutal that hardly any country could ignore it. The U.S. imposed sanctions against 18 Saudi citizens, while Germany, France and Britain slapped travel bans on the murder suspects. Berlin stopped authorizing arms deliveries to Riyadh. Crown Prince Mohammed bin Salman seemed isolated.

Since then, a year has passed and so far, nobody has been brought to justice for the murder. It's not even clear where Khashoggi's body might be. And Saudi Arabia's erstwhile isolation seems to have ended.

Cengiz refuses to accept this state of affairs, which is why she is waging a battle that she has no chance of winning: She wants justice for her dead fiancé. She has spoken before the United Nations in Geneva and also made an appearance in the European Parliament.

It is a warm, July day in London and men in suits are rushing to work as women pull children along behind them. Cengiz is also in a hurry. Her class is beginning soon.

Cengiz has a bachelor's degree in religious studies and a master's in Middle Eastern studies and speaks fluent Arabic. Now, she is studying English 15 hours a week in small class with nine other students. Cengiz had long wanted to improve her English -- but more than anything, she wanted to escape. "Nobody here knows who I am," she says.

Lost Her Will to Live

In Istanbul, everyone recognizes her and even people who don't know her know that she was Khashoggi's fiancée. But in her English class in London, she is just Hatice, a student who sometimes struggles with pronunciation.

But Cengiz can't just erase the events of last year. The hours she waited in front of the building for Khashoggi to come back out. The days afterward in which she lay in bed following social media, still hoping that her fiancé would show up after all. The weeks after Saudi Arabia had admitted that Khashoggi had died and Cengiz fell into despair and lost her will to live.

Sometimes, Cengiz meets with journalists and talks about her life with Khashoggi and his death. But each interview is a challenge, she says, and she can't sleep the night before nor can she easily calm down once they are over. "I want to talk about Jamal, I see it as my responsibility," Cengiz says. "But this responsibility overwhelms me sometimes."

Cengiz knew Jamal Khashoggi before he knew her. She has been interested in the Arab world for a long time, having taken a language course in Cairo in her early 20s. Ever since then, she has followed developments in the region. When the Arab Spring began in late 2010, Cengiz put a television in her room so as not to miss a single news story.

"At some point, I saw Jamal on the screen," she says. Khashoggi still lived in Saudi Arabia at the time and he often commented on current developments for the broadcaster Al Jazeera. "The things he said had vision and depth," Cengiz says. She set up a Twitter account just so she could read what Khashoggi wrote there.

Cengiz spent several years monitoring Khashoggi's work and she continued even after he left Saudi Arabia following a warning and moved to the U.S. At the time, Crown Prince Mohammed bin Salman was consolidating his power. On the one hand, MbS, as he is called, introduced reforms and allowed women to drive. On the other, however, he allowed no criticism from those who thought differently. Khashoggi, who demanded that democratic reforms be introduced in Saudi Arabia, feared arrest.

"From that point on, I was even more interested in reading what he wrote," Cengiz says.

Khashoggi wrote a column for the Washington Post and was highly sought after both as a speaker and commentator. In May 2018, he and Cengiz met for the first time at a conference in Istanbul. "We were standing at the buffet and I suddenly saw him out of the corner of my eye," Cengiz recalls. "The man who I had been following for so long."

Cengiz asked Khashoggi for a brief interview, and she insists that her interest was purely academic in nature. "I found his views intelligent, but there wasn't anything personal about it," she says. They spoke for 27 minutes, and Cengiz was so reserved that she didn't even ask Khashoggi for his card.

But that same day, she received a message from him: "I am going to be back in Turkey soon and would like to see you again."

The exchange turned into a friendship, and soon, they were talking on the phone every evening, with Khashoggi calling her when he returned to his apartment after work every day. Cengiz was 36 at the time and Khashoggi was almost 60. "He was an old man!" she says. "I thought: How should I ever tell my parents?"

But they had a connection, despite the age difference. Cengiz, who had read Tolstoy and Dostoevsky as a teenager, loved books and was deeply interested in international politics. Khashoggi, meanwhile, was looking for a partner who was his equal. "If he had only focused on my age, he would have found a different woman," Cengiz says.

In early August, just a few weeks after their first meeting, Khashoggi asked Cengiz to marry him. "My father just stared at me when I told him," she recalls. "He wasn't supportive of this marriage, but he also didn't want to stand in the way. " The only condition was that Cengiz not live full-time in the U.S.

When Cengiz speaks about the weeks during which she first got to know Khashoggi, she gets calmer, smiling like a lovestruck teenager and showing pictures of Khashoggi she has saved on her phone. But suddenly, her expression changes. Cengiz freezes up and stops talking in the middle of a sentence: "Can we please go inside?" she asks.

Two men have sat down at the next table. "From Saudi Arabia," Cengiz whispers. Startled, she flees into the café.

After Khashoggi's death, pro-Saudi media outlets began spreading rumors about Cengiz that she was a Turkish agent and had connections to Islamists or that she had a relationship with an Iranian. Iran is seen as Saudi Arabia's archenemy. Cengiz was put under protection. "I used to just study the conflict in the Middle East," she says. "Now, I'm right in the middle of it."

In the night of Oct. 20, more than three weeks after Khashoggi's disappearance, Riyadh announced that the journalist had been killed inside the consulate. Cengiz read the news the next morning when she got up for prayers. She remembers just staring at her phone and then throwing herself onto her bed, overcome with grief.

Cengiz started going to therapy and a psychiatrist prescribed an anti-depressant. As the weight slowly lifted, Cengiz began trying to remember who she had been before Khashoggi's death. "A young woman who had wanted to continue her studies."

She matriculated in the University of Istanbul, but she only lasted a week. "It was like the walls were closing in on me," Cengiz says.

The entire city seemed to be folding in on her. Istanbul was full of memories: the waterfront where she walked with Khashoggi, the restaurants they ate at together, the hotel where they had wanted to wed.

Cengiz couldn't take it anymore. In April 2019, she moved to London.

She now lives her life inside a radius that stretches from her three-room apartment to her language school and to a Palestinian-Lebanese restaurant where Cengiz sometimes eats lunch and where she can speak Arabic with the waitstaff.

She could, of course, decide that this one life in London is enough for her, the life as Hatice, the student about whom no one knows why she decided to move to England. She could reject the journalist inquiries and replace the photo of Khashoggi that she still uses as wallpaper on her mobile phone screen. "But being with somebody also means standing up for him," Cengiz says.

It is a Wednesday in September and Cengiz is on the way to an interview with the British broadcaster Channel 4. Cengiz is so tired that she missed her English class that morning. Nevertheless, a short time later she sits in front of three television cameras and answers questions about her dead fiancé. Cengiz has already met with the reporter interviewing her on several occasions. "I don't know if we are tormenting her or helping her," he says before the interview.

If the murder of her fiancé was being investigated, Cengiz wouldn't be exposing herself to all the media attention. Saudi Arabia has prosecuted 11 men for Khashoggi's murder and five of them may be sentenced to death. "But those truly responsible will get away with it," she says.

The United Nations also performed an investigation into Khashoggi's murder. The report, which appeared in June 2019, doesn't explicitly say who ordered the murder of Khashoggi, but it recommends investigations into high-ranking Saudi officials -- including Crown Prince Mohammed bin Salman.

MbS is famous for his short temper, and it could be that he wanted to take revenge for Khashoggi's criticism. Cengiz, though, says: "Even if Jamal's column was bad for Saudi Arabia's reputation, his death was even worse."

Ultimately, though, the outcry didn't last. Because of its oil, Saudi Arabia is too important to be shunned for long.

In order to call attention to this injustice, Cengiz intends to return to the Saudi Arabian consulate in Istanbul on Oct. 2, where she will hold a speech at the site where she waited in vain for her fiancé to reappear one year ago. "I will say: Back then, I was a woman who wanted to marry. Today, I stand here as part of a world that hasn't managed to bring those responsible to justice."

Recently, Cengiz took a small step back toward normal life. For the first time since Khashoggi's death, she ordered a new pair of shoes: pink and orange sneakers. She also wrote herself a card. "Happy anniversary, Hatice," it said. 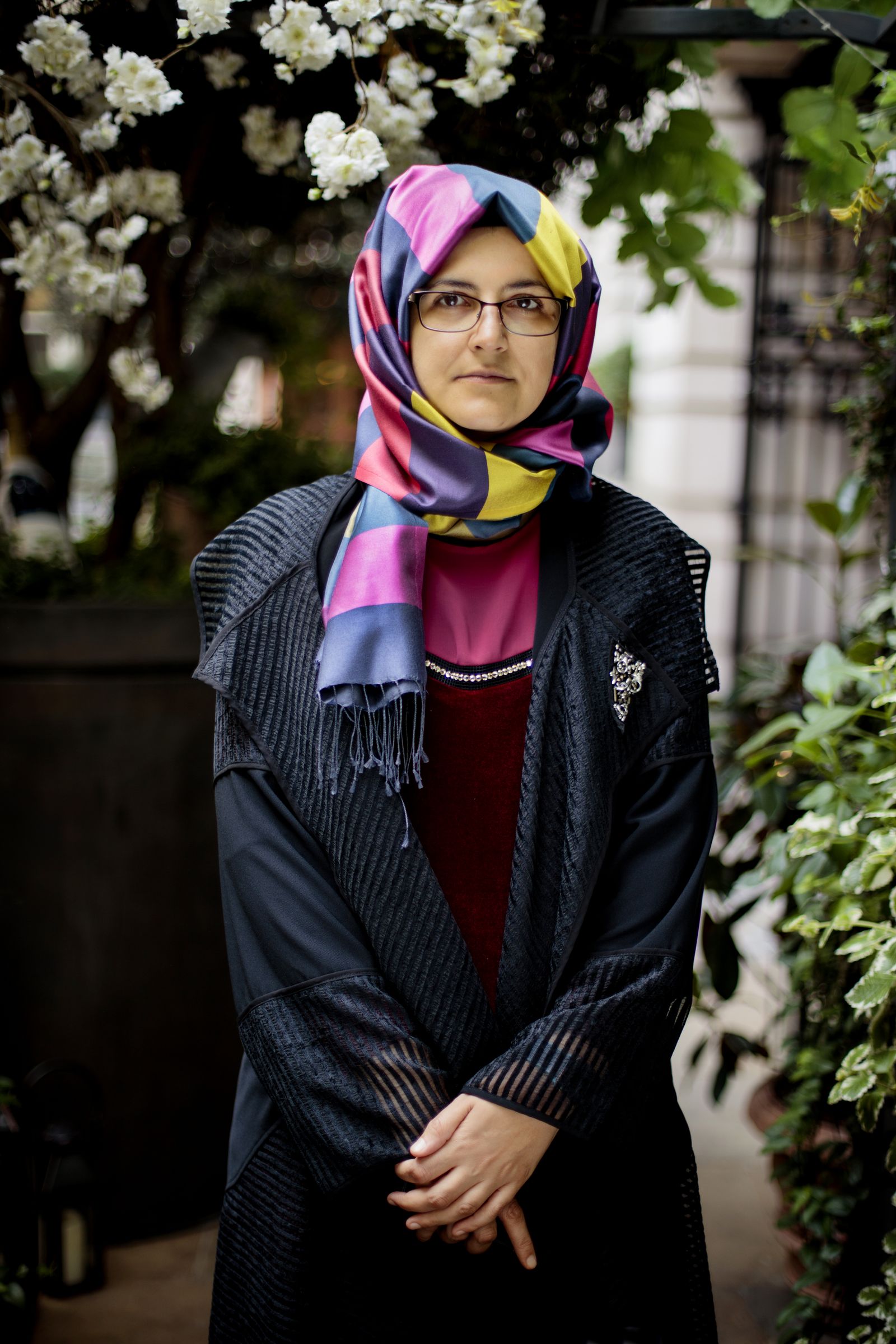 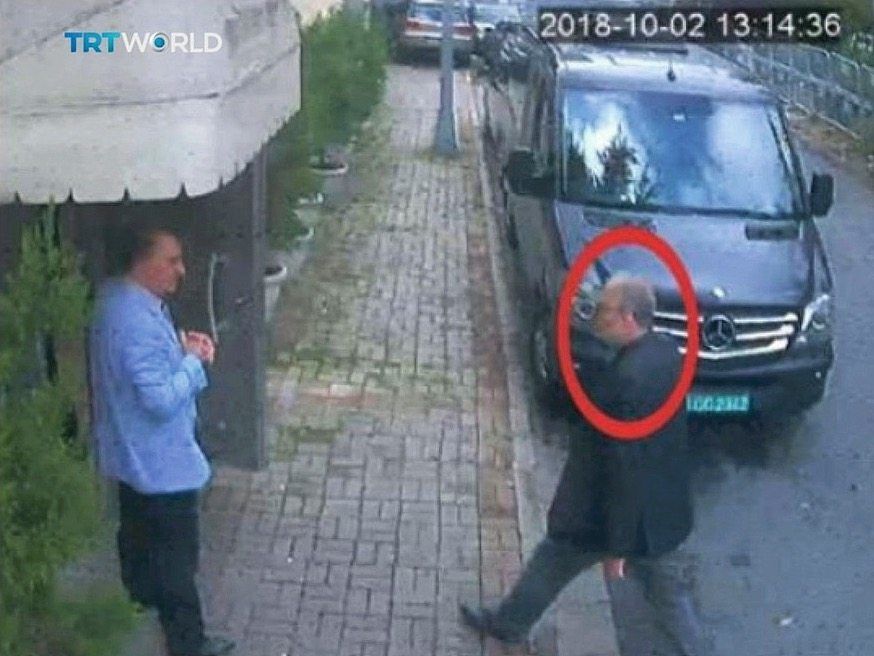 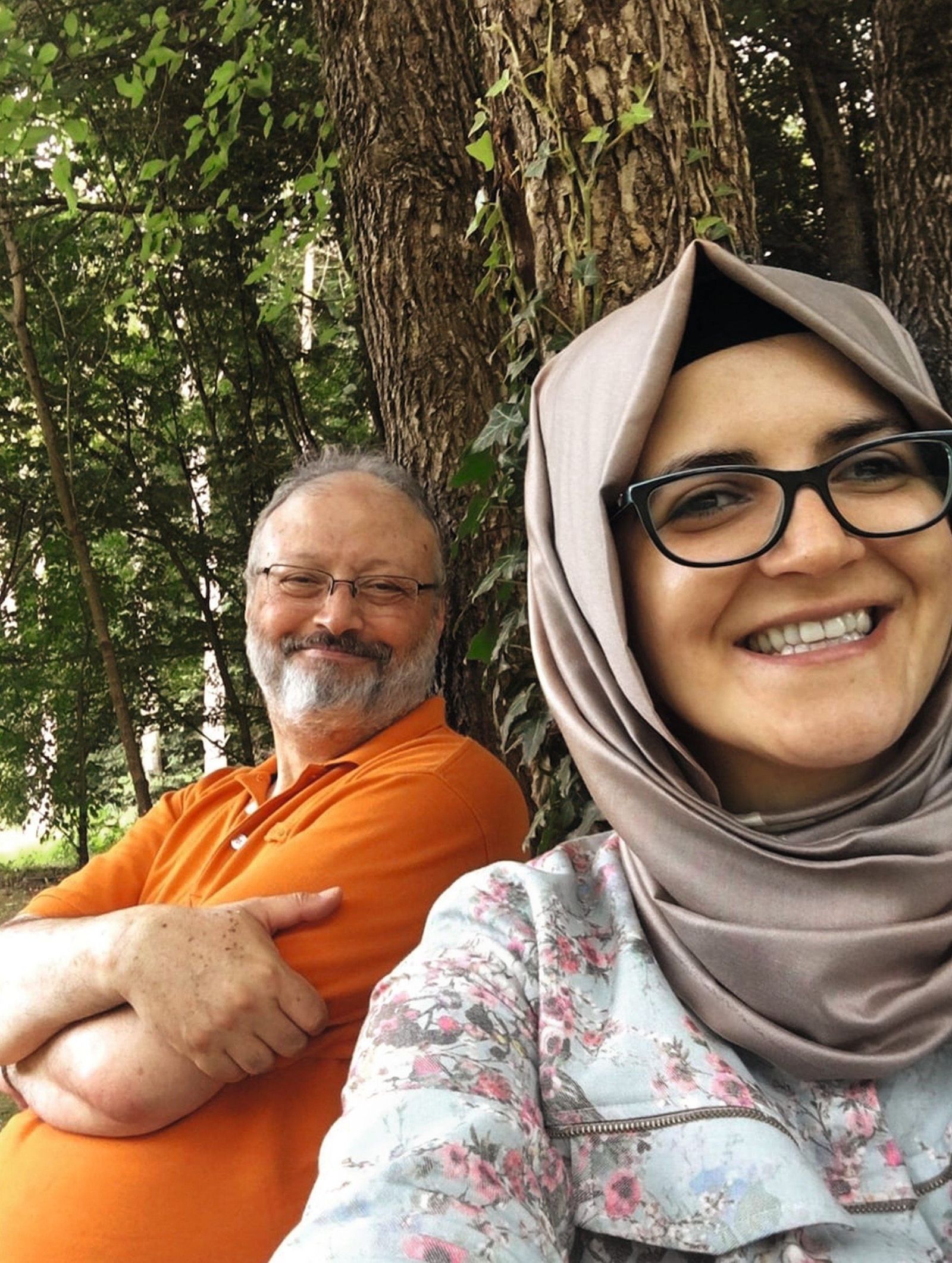