Shortly after the midday prayer, a nervous tension settles over the city of Djibouti. Men anxiously check their mobile phones and call their acquaintances. Anything new? Where are the trucks?

Then the news comes: The khat has just crossed the border from Ethiopia – and the shipment should arrive in Djibouti’s capital, also called Djibouti, in about an hour and a half.

The trade in khat has long since became an important part of the economy in Djibouti, the small desert nation located on the Horn of Africa. Around 15 tons of the amphetamine-packed leaves are imported each day. It is estimated that trade in the stimulant is responsible for around 5 percent of gross domestic product. And since the beginning of the corona crisis, the economic importance of the khat trade has risen.

Djibouti - one of Africa's smallest countries, with just 1 million inhabitants - depends on trade, and on its strategically important location. In recent years, the coastal nation has managed to develop one of the most modern ports in the region. It's land-bound neighbor Ethiopia, in particular, with a population of around 110 million people, is dependent on imports and exports through the Port of Djibouti.

But trade has slowed considerably as a result of the corona crisis. It has now become even more difficult to get a job at the port, in transport or in industry in the country. Data from the African Development Bank shows that unemployment was already close to 40 percent before the crisis began.

Khat seller Zainaba A. says that her husband has also been affected. He works at the port doing odd jobs, she says. When asked who earns more money – she or her husband – Zainaba sighs and looks a little sheepishly at other sellers in the neighboring stands. She says she can’t say. It’s well, you know … Does that mean he makes more? She glances shyly at her girlfriends one more time and then bursts out with pride: "Of course! Much more! And it has been that way for years!”

She says she doesn’t want her husband to feel bad about it. But without the income from the khat business, her family would no longer be able to make ends meet. The other women nod. For many of them, what was meant to be a little extra money has become the bulk of the family income. Now, the roles have flipped for the men and they’re the ones bringing a little extra.

The crisis has only served to reinforce this dynamic because, unlike the rest of the economy, the khat trade has largely been unaffected by the pandemic. Instead, prices, just like consumption, are rising, says Zainaba.

Indeed, the khat trade in the region has proven its resilience, having survived crises that were worse. Even during the height of the civil wars in Yemen and Somalia, supplies almost always arrived on time in the country. And timely arrival is critical: The small, leathery green leaves start losing their effect around 24 hours after harvesting. That’s also why people start getting jittery around midday in Djibouti.

Zainaba is also keyed up. One of the trucks has apparently had a problem on the way. She’s on the phone, trying to find out what happened. The first customers are already dropping by, asking if the khat has arrived. Where exactly is the transport stuck? The agitation is contagious, and soon the whole neighborhood knows that the khat is running late.

To everyone’s relief, all four trucks turn into a dusty parking lot about an hour later at the central transshipment point in Djibouti. Now the sacks are unloaded and packed into smaller cars. Some rush to the port where the khat is loaded onto speedboats and taken to coastal towns in the north. Others drive to different neighborhoods in the capital.

Journalists aren’t welcome observers to the process. The parking lot belongs to the Société Générale d’Importation de Khat (SOGIK), says Monsieur Ouarabi, the tall head of the company’s security team. "Anyone who snoops around here is messing with the devil,” he says.

A senior manager at the company turned down a request for an interview. The reason the company doesn’t want to talk is that SOGIK is operating in a legal gray area. "But isn’t khat perfectly legal in Djibouti?” – "Yes, it is – but drug trafficking is still drug trafficking.”

Meanwhile, the courier has also arrived at the street where Zainaba sells khat. The goods are distributed to the women from a small storage room. In total, it is believed there are around 2,000 street vendors like Zainaba. The vast majority are women.

"Dealer” is such a harsh word, says Zainaba. But it’s not entirely wrong, she adds, given that khat is a drug. She also says she would never touch the stuff herself. Zainaba knows the damage the drug causes.

For many women like Zainaba, khat is both the solution to and the root of their financial problems, given how the money they earn from khat is often lost again through their husband's consumption of the drug. The World Bank estimates that an average household in Djibouti spends between 20 and 30 percent of its budget on khat. That’s more than is spent on rent, education and health. The only thing families spend more money on is food.

But what at first glance might look like a zero-sum game could actually not only massively strengthen the role of many women in Djibouti, but also contribute to the country’s development. Past experience with developing nations shows that the greater share of a family's budget is managed by women, the more of that money goes to education and health.

However, the price paid by society is high. The World Bank estimates that the average "khatter” spends about seven hours a day chewing the narcotic leaves. That’s almost the equivalent to a full day’s work. The economic losses are enormous, not to mention the social and health consequences.

There are no current plans to ban the drug. Import company SOGIK is officially registered and pays taxes, with the government reportedly earning the equivalent of around 6 euros per kilo. Neither the authorities nor the company would provide precise information about the state-tolerated drug. However, estimates suggest that at least 15 percent of Djibouti’s tax revenues come from the khat trade.

On the whole, though, the drug is probably bad for the country, says vendor Zainaba. But it’s not the kind of question she can afford to spend too much time thinking about. "I'm just thankful for the freedom this business provides me." 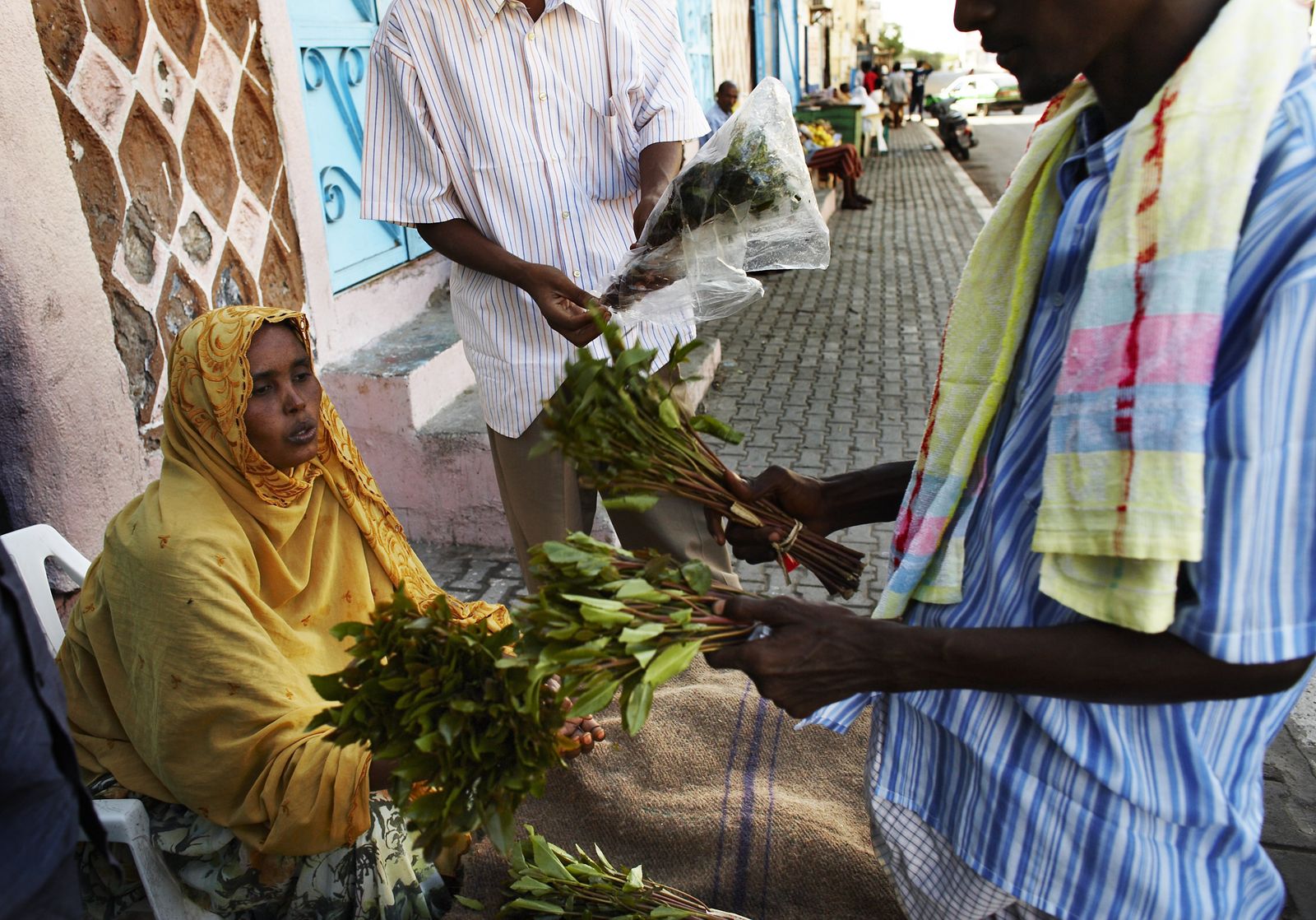 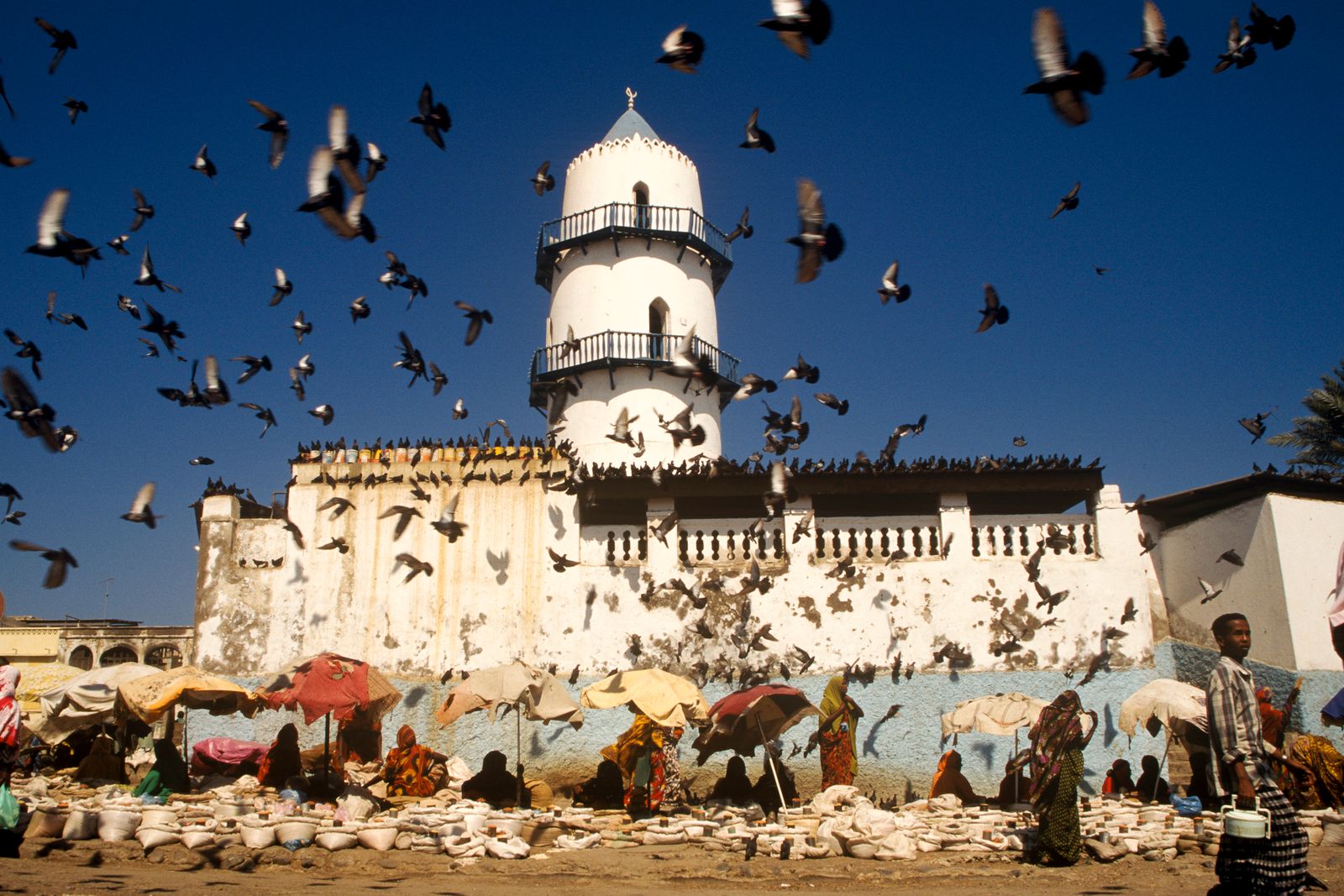 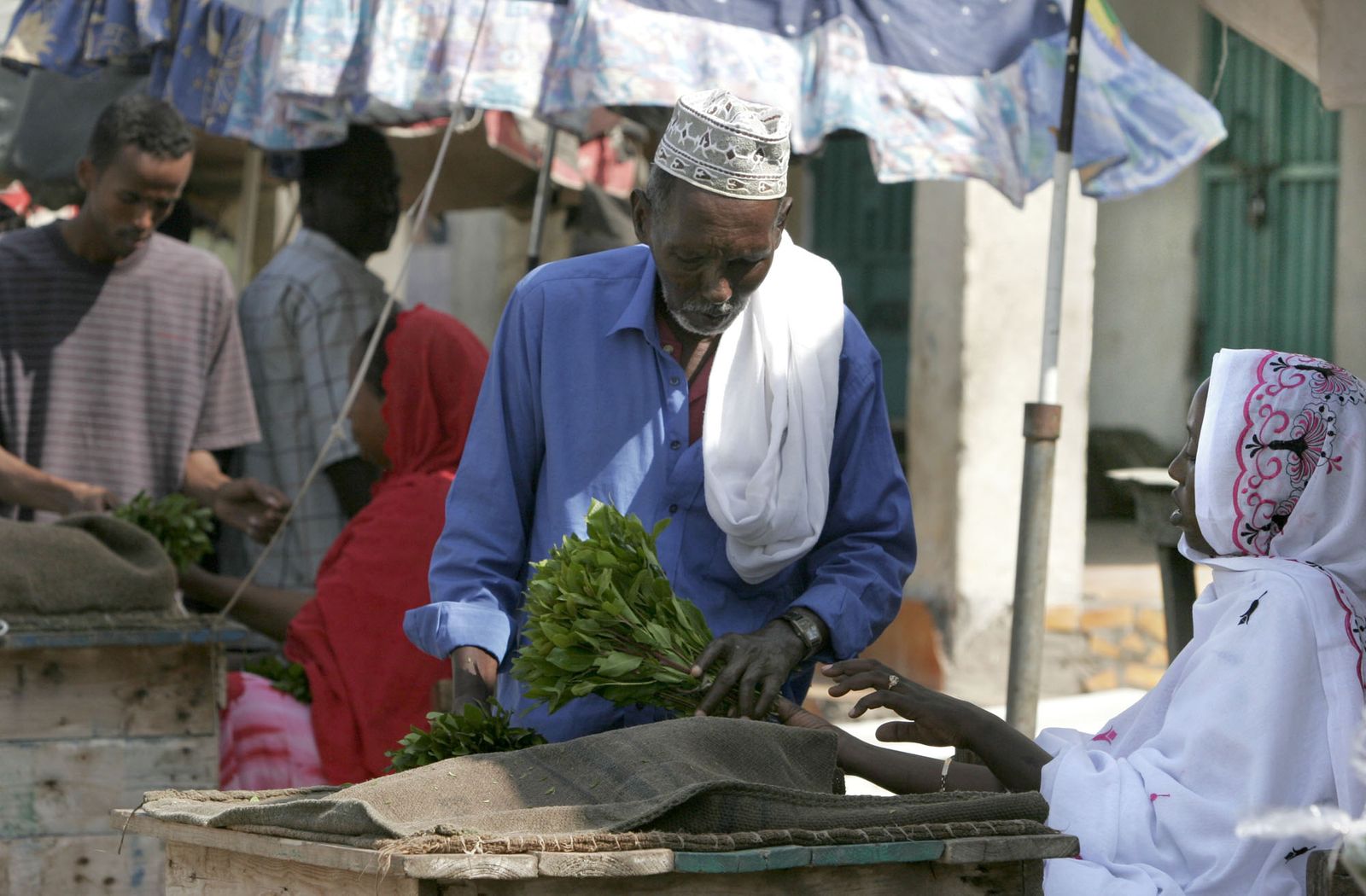 Khat sales in Djibouti City: Trade in the drug, which is legal here, has been largely unaffected by the coronavirus pandemic. 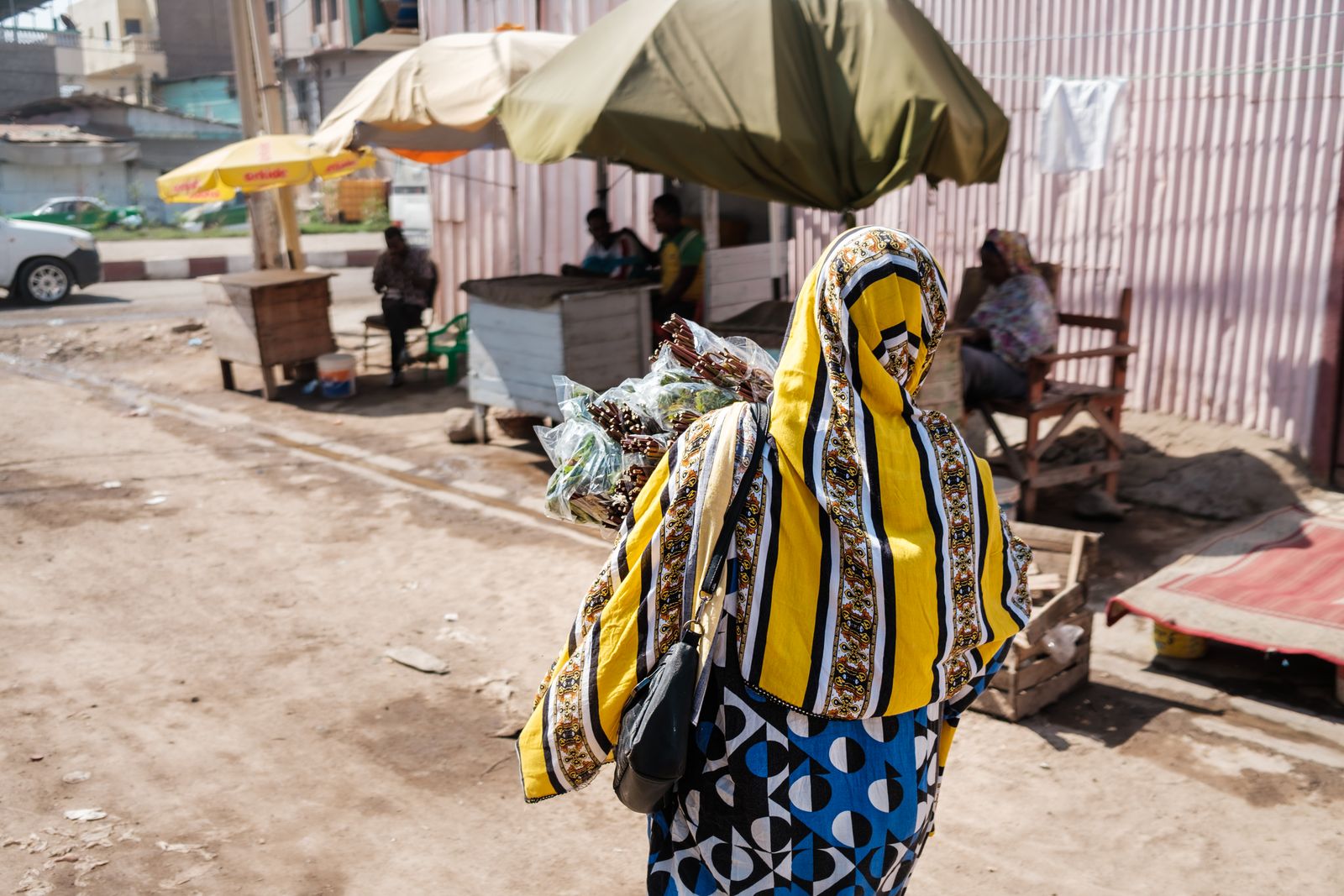 Vendor Zainaba A. on the way to her stand, arms full of khat. 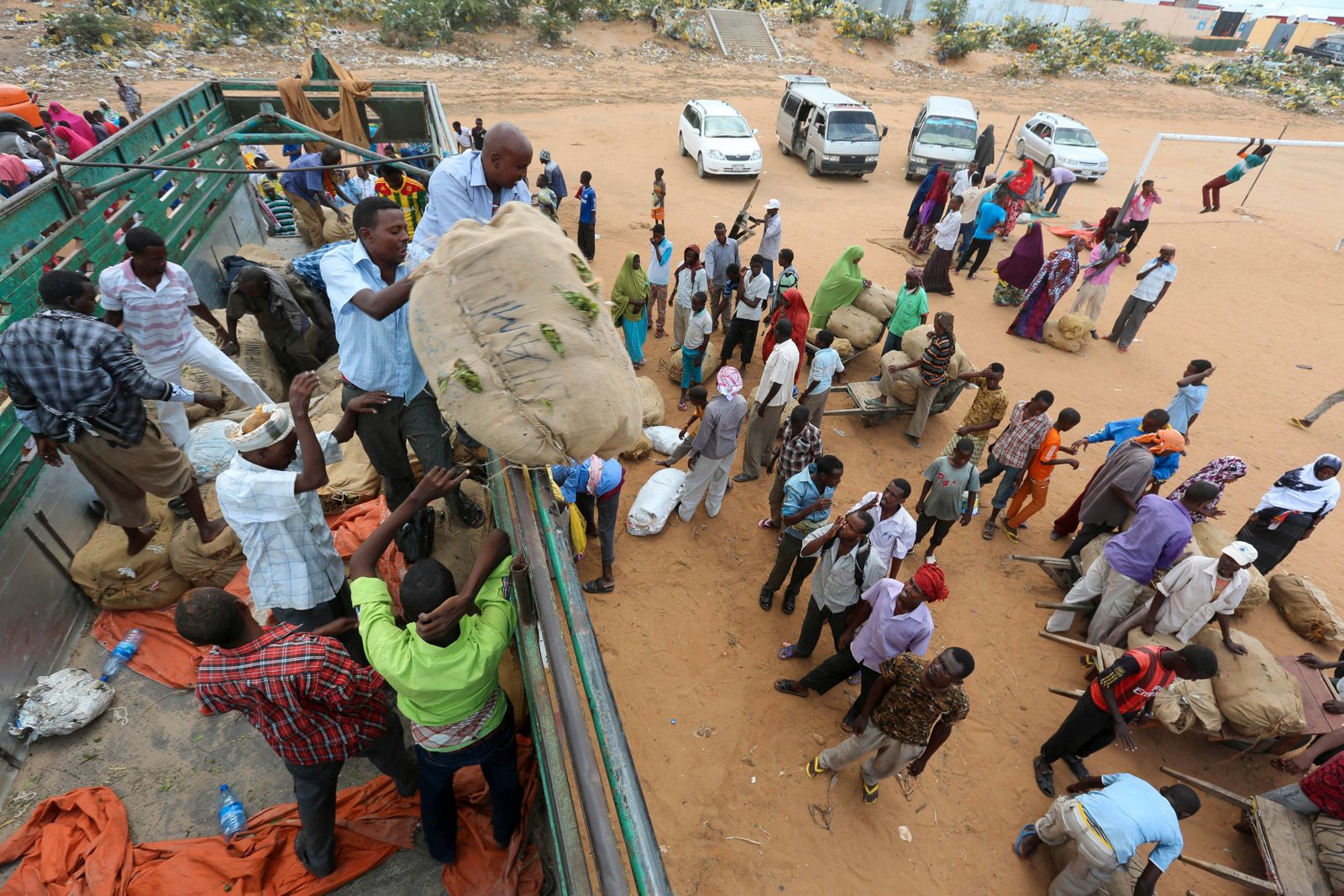 Porters gather around a truck carrying khat in Mogadishu (in this archive photo from 2014). 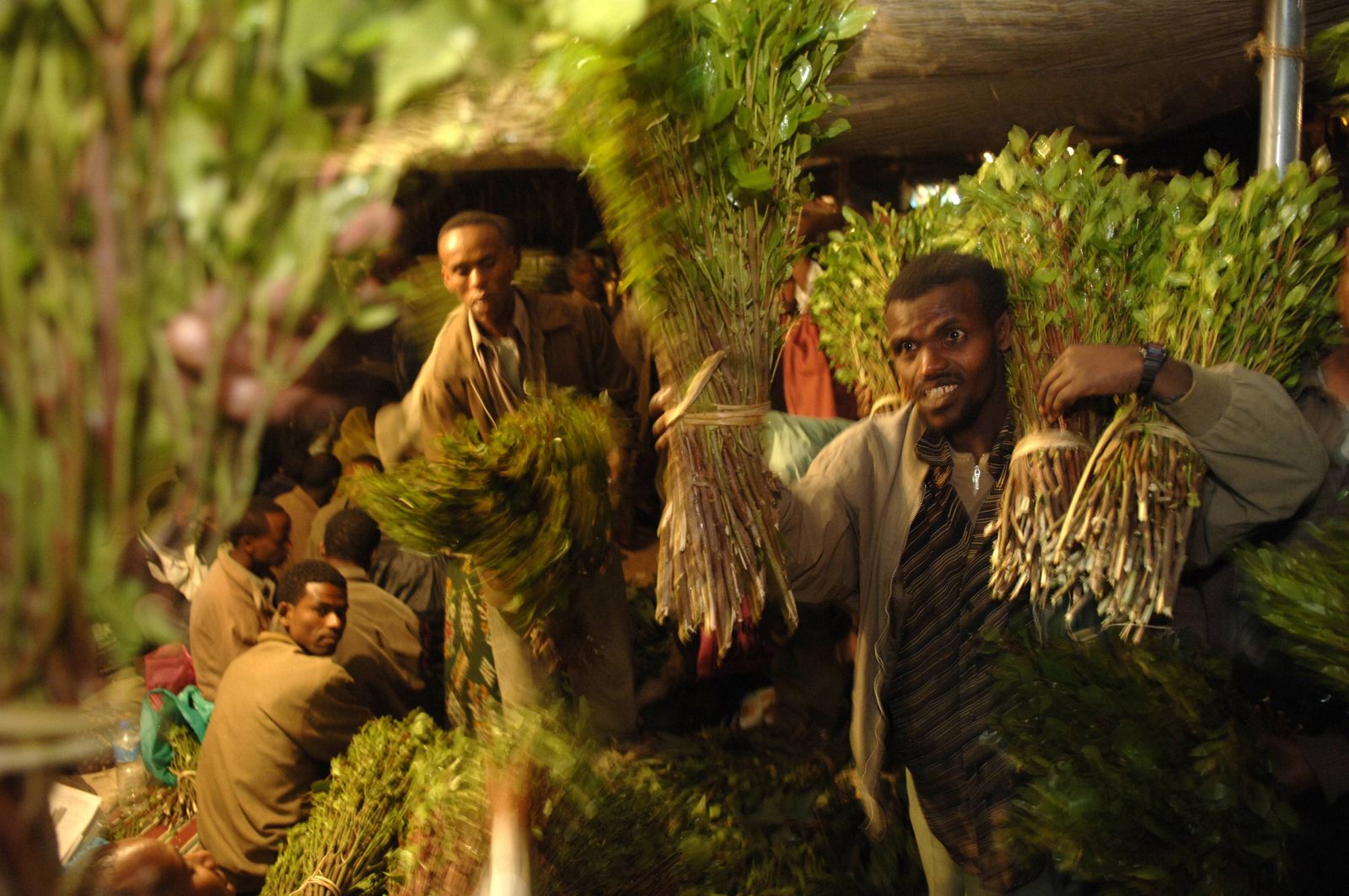 Khat farmers selling their harvest: Consumption of the plant is probably most comparable to chewing coca leaves. After a few hours, however, the stimulating effect often gives way to a deep inertia.