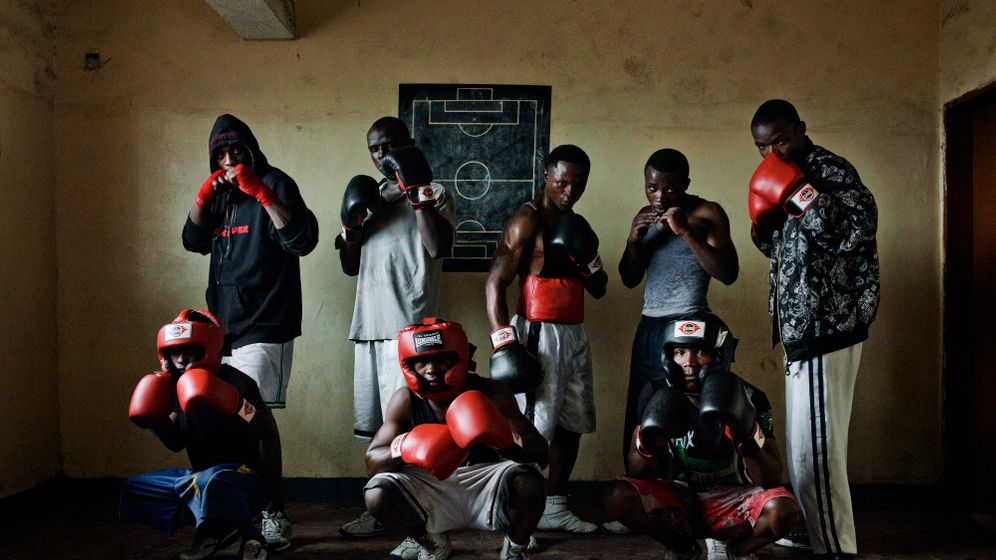 As Kibomango trains, pummeling a grey punching bag with his fists, the red sand crunches under his feet. There's no boxing ring in Goma, in the northeast of the Democratic Republic of the Congo. There's not even a real boxing club. Kibomango and his boys work out in a tiny room in the football stadium's catacombs. The young men follow his fists with their eyes. Many of them have killed people in their previous lives as child soldiers. Kibomango wants to prevent them from doing it again.

The 35-year-old has wide shoulders and impressive muscles, which come in handy, given his real opponents -- rebel recruiters who stand on the street in front of his boxing club. They whisper to the boys: "Come to us. We'll pay you. We have women." Despite knowing what really awaits them in the jungle, some give in and disappear with them into the militias.

Goma is Congo's unofficial rebel capital. Militias maraud in the surrounding forests, and in December 2012, the M23 militia even occupied the city for 12 days. Although it's calm right now, the rebels are never far off. The poverty in the slums drives new recruits and veterans back into their arms.

Italian photographer Francesca Tosarelli has visited and even trained with Kibomango. She travelled to the eastern Congo crisis region in early 2013. There, she photographed female fighters in rebel groups and spent time with Kibomango and his boys. "He's a father figure for the young men, they look up to him," says Tosarelli. "They're all angry and frustrated. When they box they can let it all out."

Kibomango calls his group -- which meets every morning to train at 6 a.m. -- the "Friendship Club."

"I feel at ease when I see them practicing," he told the US broadcaster National Public Radio earlier this year. "Considering what we passed through, when I see young people practicing like this, it pleases me a lot."

Kibomango knows exactly what horrors many of his fighters have both experienced and inflicted on others. His left eye is missing and scar tissue covers the eye socket. The injury is not from boxing. Before he began his school, Kibomango -- born Balezi Bagunda, though now people in Goma call him by his boxing name -- scoured the Congo as a militia member. He fought and killed people until a bomb fragment hit him in the eye, making him useless with a weapon.

He still steps into the ring, despite his disability. He even calls himself Congo's boxing champion, though the exact circumstances of that title win are nebulous. Whether real of not, it's not helping him financially; he doesn't make any money through boxing. Kibomango supports his extended family by working as an auto mechanic.

Every day, he works on the streets of Goma inside or underneath different vehicles. He can fix any car, he says, and passes those skills along to his young boxers too. He knows that a paid job will make the rebels' offers less enticing.

Training is held under the football stadium before the workday begins. The sport helps the boys express their anger and forget their traumas, but Kibomango impresses upon them that boxing isn't just pure aggression. His message: Technique, patience and self-control make a good fighter. He wants his fighters to pass this on. He wants to turn them into versions of himself, preventing other young people from falling into the rebels' traps.

But he also understands that his fight is largely futile. Too many young people are just hanging around on the streets of the Congo, and the recruiters' offers are too seductive. But in the ring, he's never run away from a fight or an overpowering foe. That's why, every morning at 6 a.m., he stands in front of his students and wallops the punching bag. He's fighting for his vision of the Congo, a land in which the only things flying are fists, not grenades.