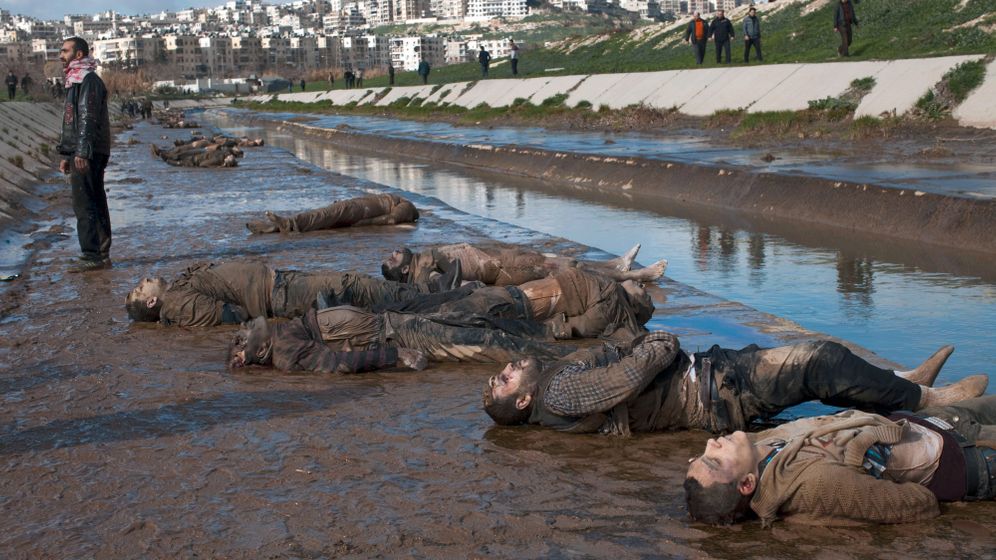 Photo Gallery: Corpses in the Current

The men from the collection point for the nameless dead always come during the morning. They descend from a major intersection in the Bustan al-Qasr district to the small Quweiq River and bring the bodies that have washed up overnight to a courtyard, where they are wrapped in white sheets and photographed before being left there for a day. This is the place where people looking for missing relatives come to find them.

For weeks now, the river has brought new bodies almost every night. The corpses arrive without any identification and the hands are generally tied together with plastic strings. The men have all been shot.

The week before last, the river carried three bodies on some days, and seven on others. Last Monday there were five, but on Tuesday there were almost 80. There had been heavy rain in the night, the river level had risen, and now corpses were lining the muddy river bank.

Bustan al-Qasr is located on the edge of no-man's land between the fronts in the divided city of Aleppo. The Quweiq River flows from districts of Aleppo located on higher ground that are controlled by the regime down to the parts below under the control of the rebels. A prison belonging to Assad's security service is located upstream in the regime area.

This time hundreds had come to the river, making the journey from other cities to Aleppo to search for missing relatives. Many found them and were able to not only identify some of the dead, but also to explain why so few had been identified in recent days and weeks. The dead were students enrolled at the University of Aleppo who had come from other cities to stand exams.

The campus is located in a part of the city that is still controlled by Assad's troops, and the students had to pass their control posts.

They Didn't Think Anything Would Happen to Them

"He wasn't on any wanted list," says a friend of 22-year-old Udai Rifaat Hablas, an engineering student from the neighboring province of Idlib whose body washed up on the shore. "He thought they wouldn't do anything to them, but one of his cousins is with the rebels."

Another of the murdered young men had come to the city from Raqqa in the east in the hope of finding spare parts for some of his farming machines. A third wanted to find out whether everything was in order at his store, which he had closed. All had gone to the control posts thinking that nothing would happen to them.

In each case, that turned out to be a fatal mistake. It appears that Assad's people arrested the men, brought them to jail and shot them before throwing them into the river.

On Wednesday, Jan. 30, five more bodies were discovered. On Thursday, another three arrived. It is believed that many more bodies are still stuck upstream. The men from the local neighbourhood council say they could see further bodies from the distance. But it would be suicide to try to remove them, because the area is within range of the regime's snipers.

Still, a few men have tried to push corpses into the river with long poles. Most of the bodies can't be reached, though. The river has become narrower since water levels have fallen.

They say they will have to wait for the rain to return.