Christian Nakulire was shot to death on the morning of August 26. He was walking in Kahuzi-Biéga National Park in eastern Congo with his father, looking for plants to treat his little brother's diarrhea, when a group of Congolese "eco rangers" opened fire on the two men from the Batwa tribe, a Pygmy ethnic group. Nakulire was 17 years old when he died.

It is the kind of incident that might not otherwise have received much attention, but for the fact that Germany is heavily involved in faraway Kahuzi-Biéga. Indeed, the park is something of a monument to German development aid. And a prime example of its failure. It raises the question of how far green colonialism should be allowed to go, and how many people should be displaced in the name of environmental protection.

Germany has been working together with the Democratic Republic of Congo, formerly known as Zaire, for quite some time. Several million euros have flowed through Germany's Reconstruction Credit Institute (KfW) and the German Corporation for International Cooperation (GIZ) into the region west of Lake Kivu since the mid-1980s. The park, whose 6,000 square kilometers (2,300 square miles) of rainforest are located at the foot of two extinct volcanoes, was to become a tourism hotspot. Back then, it was still home to forest elephants and one of the last populations of eastern lowland gorillas. At that point, there were a few thousand animals, but now there are only about 200.

That failure, however, doesn't seem to have turned of the German backers. Indeed, the GIZ has now provided another 8 million euros, specially dedicated to the "neighboring population" of the park, whose living conditions, a spokeswoman insisted, have been "improved" by the GIZ.

Munganga Nakulire, though, hasn't discerned much improvement at all. Before the death of his son, the 48-year-old says, they had been able to earn the equivalent of 1 euro per day in the banana orchards. But in the incident that killed his son, he too was hit by five bullets and can no longer work as a result. Nakulire is standing in front of his straw hut in Buyungule with an interpreter and talking via Skype.

Buyungule is one of the villages at the edge of the park that was to benefit from the development aid, and it was to be the dawn of a new era for the Batwa. "We live here like animals, maybe even a bit worse," Nakulire says. Some organizations, he allows, have opened schools here, but they were the same organizations that kept the children out of the forest so they wouldn't bother the animals and the tourists. But in eastern Congo, which is still ruled by rebel groups, tourists are a rare sight.

By contrast, about 6,000 Pygmies currently live at the border of the park, most of them as poor as Nakulire. Before the park was founded in 1970, they lived in the forest as nomads and excelled at tracking animals and finding rare trees or healing plants. Because of this, the first Europeans who arrived called them "natural compasses."

"When I was five years old, we were thrown out of the park," Nakulire remembers. "A white man they called Adrien Deschryver arrived with a couple of village leaders and settled things." Deschryver, the park's founder, was a descendant of the last Belgian colonies minister, a child of colonialism.

At the time, environmental conservation was displacing more and more people. It was the era when TV zoologist Bernhard Grzimek and the first president of the World Wildlife Fund (WWF), Prinz Bernhard of the Netherlands, convinced African potentates to pursue "fortress conservation," as Mark Dowie refers to it in his book "Conservation Refugees." Around the world, he wrote, over 108,000 officially protected areas had been created since 1900. Indigenous people who had lived there for centuries were suddenly seen as "poachers" while white big-game hunters, like longtime WWF honorary president Juan Carlos of Spain, who enjoys hunting elephants, posed as conservationists.

German development policies weren't much better. The ministry responsible was controlled by the Christian Social Union (CSU) at the time, the Bavarian sister party of the center-right Christian Democrats, and seemed to have a preference for supporting authoritarian potentates. Then-CSU head Franz Josef Strauss was himself a big-game hunter and seemed particularly taken with Zaire's dictator Mobuto Sese Seko, a man who occasionally had extremities hacked off of his political opponents. The Germans were given permission by the dictator to oversee the construction of roadways, including several stretches of the road between Kisangani and Bukavu. The fact that part of it went straight through Kahuzi-Biéga National Park concerned nobody, nor did the disapproval of UNESCO, which was concerned about the park's World Cultural Heritage status. In total, the ministry made around 200 million deutsche marks available for the project, beginning in the 1980s.

"The road didn't just slice through the gorillas' habitat, it paved the way for a war that was already foreseeable at the time," says Karl-Heinz Kohnen, who has visited the area several times on behalf of the German group Mountain Gorilla and Rainforest Direct Aid, a non-profit group working to protect gorilla habitat.

To this day, the road has also made it easier for people to take what they want from the forest: It helps rebel groups and the army supply themselves with fresh game meat and enables the transportation of coltan, a mineral that is important for the construction of cell phones. "But the first profiteers were the German companies," says Kohnen. He says that the Batwa people showed employees of a subsidiary of Boehringer-Mannheim, a German pharmaceutical company, where rare prunus Africana trees could be found. The company then cut the trees down to turn their bark into a prostate drug. Kohnen says it was a "mistake" to use the knowledge of the Batwa, but to otherwise keep them out of the park.

Germany's Reconstruction Credit Institute continues to adhere to the model of protecting wildlife by keeping people out of the park. And it has since become the park's largest funder. According to park director Lucien Lokumu, about $2 million came from the development bank in 2016 alone, representing about 60 percent of the budget.

A KfW spokeswoman emphasizes the extent to which the "participation of local communities" is supported, but she can hardly be referring to the Batwa. If they have any jobs at the park, they are menial ones. "In this colonial model of conservation, the Batwa play the role of impoverished extras for tourists," says Stephen Corry, director of Survival International, an organization that works to support the rights of indigenous people. "German development aid shouldn't be making the decisions about the homeland of the Batwa without their approval. Maybe some people think that gorillas are more important than people, but that shouldn't be the position of the German government."

Yet it's not entirely clear that the German government agrees with Corry. Part of the funding is used for defending the park and for the equipment necessary to do so. German aid money is thus used to fund the paramilitary camps where rangers are trained. Yet it's not the rebels that the rangers focus on - after all, the rangers don't dare go more than a couple of kilometers into the park. Rather, their priority is preventing the Batwa from getting in.

What the GIZ and KfW people don't seem to understand is that in many parts of Africa the protection of biological diversity in natural parks is a question of negotiation. If an oil company arrives and wants to invest (as was the case in neighboring Virunga Park), compromises quickly become possible.

Have the GIZ and KfW ever questioned this German form of conservation? The KfW said in response to a query from DER SPIEGEL that a "consultant" was advising them on the project. The GIZ declined to respond.

The KfW supports 510 nature reserves around the world, including 78 in Africa, many of which have at times been beset by conflict. In southeastern Cameroon, the bank works together with the WWF to support game wardens. But for years, there have been reports that these wardens have tortured and displaced the Baka indigenous people there and have even poached animals themselves. The WWF admits that it is a "delicate situation." They say they support the Baka, but couldn't exclude the possibility that attacks by the "state eco-guards," which are trained and equipped by the WWF, were taking place.

This situation recently prompted Survival International to file a complaint against the WWF with the Organization for Economic Cooperation and Development (OECD). "The work of the WWF has created misery for the Baka for decades," says Stephen Corry. Instead of excluding the indigenous peoples, he says, they "should be placed at the frontlines of conservation. Nobody can do it better than they can."

Lucien Lokumu, the park director in the Congo, recently passed along the patrol report from the day on which Christian Nakulire was killed. In the report, the unarmed boy is accused of being a "notorious" poacher. His father, Lokumu claims, had been caught with a slain gazelle a short time before. The rest of the report reads like the transcript of a normal day's duty: The gorillas, it says, were "successfully" located, the "illegal activities were discovered," and the tourists had been able to observe the apes "with success and satisfaction."

The news of the death of the 17-year-old was processed through the regular channels by the park's German backers. An "integration consultant" at GIZ expressed her thanks for the email, which she said she took very seriously, despite referring to the father as "Mrs. Nakulire."

The KfW regrets the incident. People who feel "negatively impacted," it said, have the possibility of registering their displeasure. Using a form on the internet, for example. 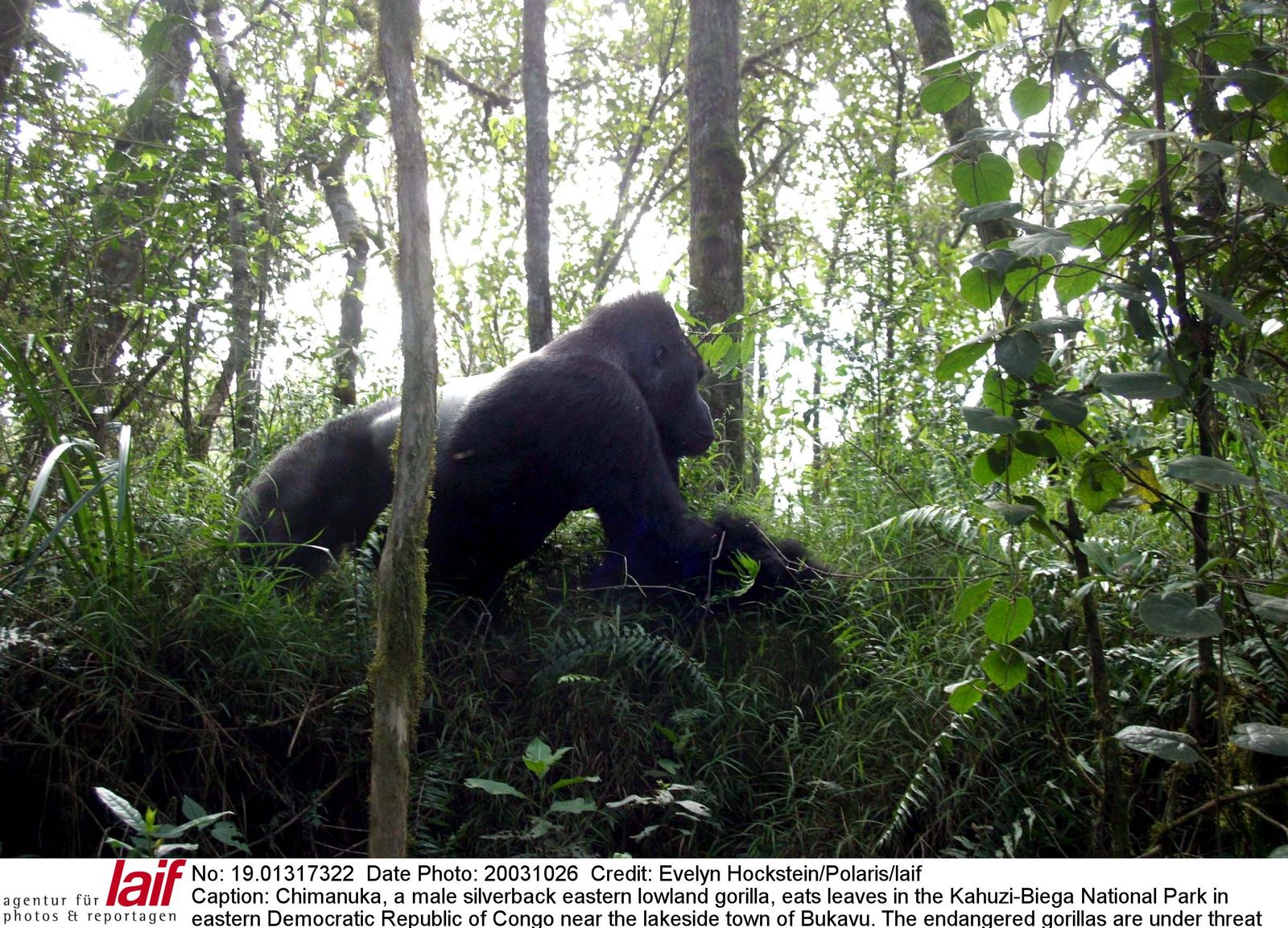 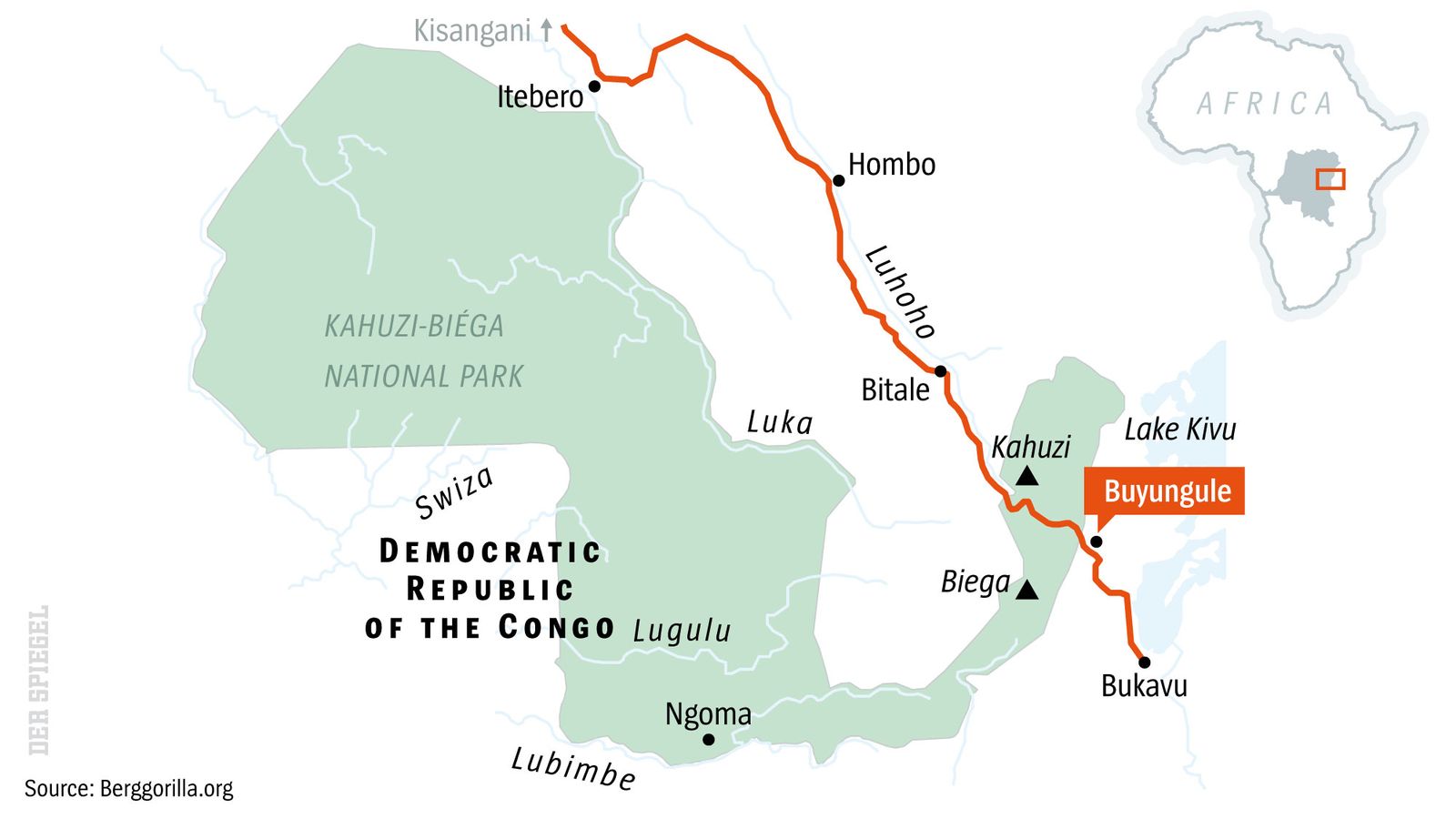