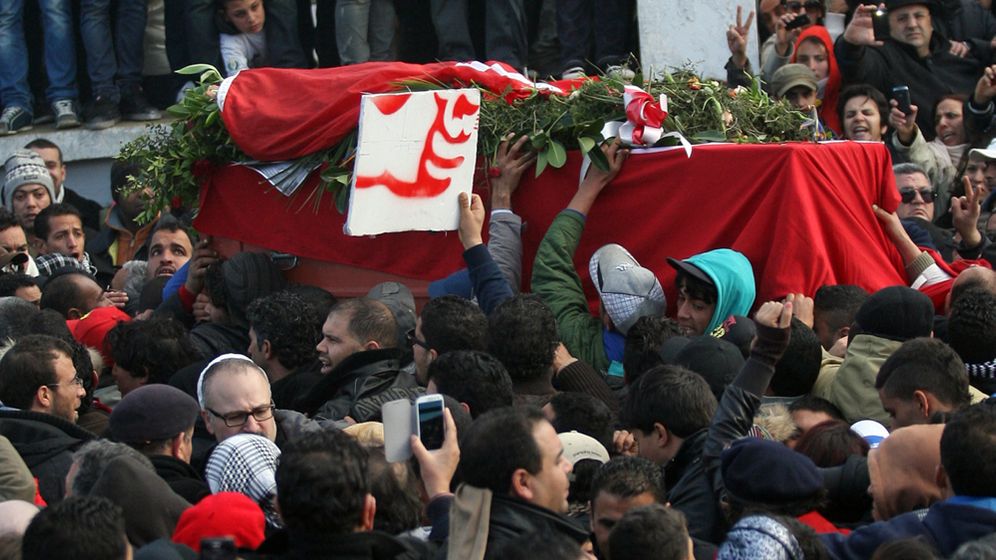 Since her husband was murdered, Basma Khalfaoui's living room has become a waiting room of the revolution. Sobbing women fall into each other's arms, and friends bring flowers and wait on white plastic chairs to offer their condolences. A new person walks into the room every few minutes. Two weeks ago, politician Chokri Belaïd was shot dead only a few meters away, in the parking lot outside the building, and it now seems as if half the country were seeking comfort from his widow.

Nada, Belaïd's five-year-old daughter, is running around in the hallway between the living room and kitchen, laughing. "She doesn't understand any of this yet," a visitor whispers. Nada's father wasn't just a leader of the leftist opposition, a critic of the Islamists and a champion of secular democracy in Tunisia. For many, Belaïd was an idol and a national hero.

But then, on the morning of Feb. 6, he was shot with four bullets and died in the hospital. The killers haven't been caught yet, but the assassination and the ensuing violence in the streets have exposed deep divides in Tunisian society. Fear of the Islamists is greater than ever. But how should a five-year-old understand that?

The Arab Spring began more than two years ago in Tunisia, when a vegetable vendor set himself on fire. The flames initially spread to the rest of the country, and then engulfed the entire region. The Tunisian people drove their ruler, Zine el-Abidine Ben Ali, out of his palace. Political parties were established in the ensuing months, and the leader of the Islamist Ennahda Party, Rachid Ghannouchi, returned home from exile. In the country's first-ever free election, 37 percent voted for Ennahda. Soon after the election, radical Salafists began to attack female students and destroy Sufi shrines.

Killing Was an Assault on Democracy

Tunisia is the laboratory of the revolution, and the experiment being conducted there could affect the entire region. Islamists and secularists are testing if and how they can peacefully coexist. It is an attempt to establish a form of democracy shaped by Islam. It isn't looking very good at the moment, however, now that the initial euphoria is gone. The country has become divided, primarily between those who want an Islamic state and others who prefer a Western-style democracy. The rifts are deep, which is why Belaïd was more than just another victim of the revolution. Indeed, his murder was an assault on the emerging democracy in Tunisia.

Like many mourners who cannot comprehend the death of a loved one, Belaïd's widow refers to her husband in the present, even though he was buried almost two weeks ago. She has withdrawn to a dark room in the back of the apartment. "Chokri is always very busy," says Khalfaoui. "In the mornings, he reads all the newspapers he can get, and he usually works until late at night. Sometimes he sleeps for only two hours."

When they met at a university in Tunis in the late 1990s, she was 29 and he was 34. Both were studying law. Belaïd was known among the students as a revolutionary and leftist activist. When workers protested against corruption and unemployment in the phosphate mines in the southern Tunisian region of Gafsa in 2008, he went there to mediate the dispute.

Gafsa was merely the precursor to a much bigger shift, but he didn't know it at the time. There was growing popular unrest, and Belaïd traveled from city to city, giving speeches, organizing meetings and supporting workers and labor unions in their fight for higher wages. Then street vendor Mohammed Bouazizi set himself on fire.

Hoping for a new beginning, Belaïd and other activists began transforming his "Movement of Democratic Patriots" into a political party. Although the "Democratic Patriots" have only one seat in parliament, Belaïd made many powerful enemies with his vocal criticism of the Islamist Ennahda Party, which is part of the current coalition government.

After the murder, one of Belaïd's brothers accused Ennahda Chairman Ghannouchi of being behind it. Ghannouchi is probably the most influential man in Tunisia. His party has plenty of money, along with hundreds of local organizations and youth groups. There is much speculation over Ghannouchi's true agenda, but until now he has managed to bring together Islamist agitators and liberal Muslims. This is one of the reasons Ennahda is considered the most moderate of the Islamist parties in the region, far more moderate than the Muslim Brotherhood in Egypt, for example. Ghannouchi is the animal tamer who keeps lions and zebras together in one cage.

The party leader walks with a stoop from his desk to a sofa at Ennahda headquarters. He will be 72 in June. He look as though he hadn't been getting much sleep lately. Although Belaïd was one of his biggest political foes, Ghannouchi sees the assassination as a catastrophe. "We also suffer from it," he says. "Instability harms us just as much as the others."

There have been repeated rumors that Ghannouchi has left for London, where he lived in exile for more than two decades. The rumors persisted, even though he was giving television interviews. He says that it's time to put an end to the false accusations against him and his party.

He blames the murder on supporters of the old regime. "They have a motive: to unsettle the system." Belaïd wasn't their real target, says Ghannouchi. Instead, he explains, their goal was to weaken the country's institutions with the assassination, and to regain power in the long term.

Nevertheless, in a rare confession for an Islamist, Ghannouchi admits that the radical Islamists present a threat. "They exert pressure on the government," says the party leader, pressure that also affects him. Before the election, the radicals hoped that Ghannouchi would introduce Sharia law in Tunisia. His party hasn't done it, not yet, at least. Ghannouchi sighs. "The government is caught between the Salafists on the one side and the leftists on the other." Poverty is the reason the Salafists are gaining power, he says. "We must spread moderate Islam and contribute to the country's development."

Many Protesters Have Turned to Salafism

Perhaps events will overtake him. Perhaps even his own party will overtake him soon. The extreme Islamists within Ennahda are calling for rallies. They reject the secular message of men like Chokri Belaïd. Although Tunisians in the coastal regions have long felt a greater affinity for Europe than North Africa, the radical Ennahda supporters and Salafists are determined to counteract perceived Westernization.

Many who took to the streets to protest against the dictatorship two years ago have now turned to Salafism. "Ghannouchi's party deceived us," says Naoufel Derouich. He has taken shelter from the rain under an awning at the Fath Mosque, a meeting point for Salafists. The Tunisian government estimates that radical imams control up to a tenth of the roughly 5,000 mosques in the country, and they are primarily attracting young people.

"No government will be on our side," says Derouich, "no matter which party happens to be in power." Even Ennahda will not support his demands, he says, noting that it hasn't introduced Sharia yet, either.

Derouich is 30, has a long beard and is wearing a dark robe. He operates a stand outside the mosque where he sells religious texts, as well as soap, perfume and hooded coats to ward off the winter cold. His father works in construction, and Derouich has a master's degree in information security. He says that he wants to become a teacher but can't find a job. "So what do I do instead? I sell soap!"

Like many Salafists in Tunisia, Derouich believes that the "West" committed the assassination of Chokri Belaïd to breed discord. Each group is honing its own theory. The leftists blame the Islamic conservatives, the conservatives blame supporters of the former Ben Ali regime, and the Salafists blame the French. Those for whom all of this seems too absurd blame the revolutionary committees.

The committees are officially called the "League for the Protection of the Revolution," but some describe them as gangs of thugs. They call for demonstrations, organize sit-ins and are trying to prevent former regime loyalists from returning to power. There are reportedly about 500 leagues in the country. Many of their members suffered under the dictatorship and have spent time in prison. Other committees have been infiltrated by Salafists, who were also persecuted under Ben Ali. Now the leagues are being held responsible for some of the violence in Tunisia. Shortly before his murder, Belaïd attacked the committees on television and accused the Ennahda Party of cooperating with them.

The chairman of the revolutionary committee of Tunis denies that the leagues are violent. He also insists that they do not cooperate with Islamist leader Ghannouchi. "Perhaps 10 percent of us are party members." His name is Mustafa Tahari, and he explains at length how independent the committees are from the government, as he sits in a finance ministry building and has an aide serve soft drinks. Three young men are standing behind him with their arms crossed.

The opposition's fear of Tahari and the other self-proclaimed revolutionary guards has grown since the assassination. "Before the 2011 election, violence was coming mainly from gangs and criminals, and it was limited to local areas," says Hamma Hammami, a friend of Belaïd and one of the best-known leftists. "Now Ennahda is creating a climate of aggressiveness. The party doesn't want democracy, but a religious dictatorship for this country." Hammami gets threats almost daily, and the Tunisian president has just provided him with bodyguards.

Basma Khalfaoui, Belaïd's widow, says that the two years following Ben Ali's overthrow were generally quiet, despite all the threats. She kept out of politics and left the talking to her husband. But that has changed since the assassination. She has become an activist, giving interviews, attending demonstrations and protesting against the government. Her friends say that Khalfaoui has to be more careful now.