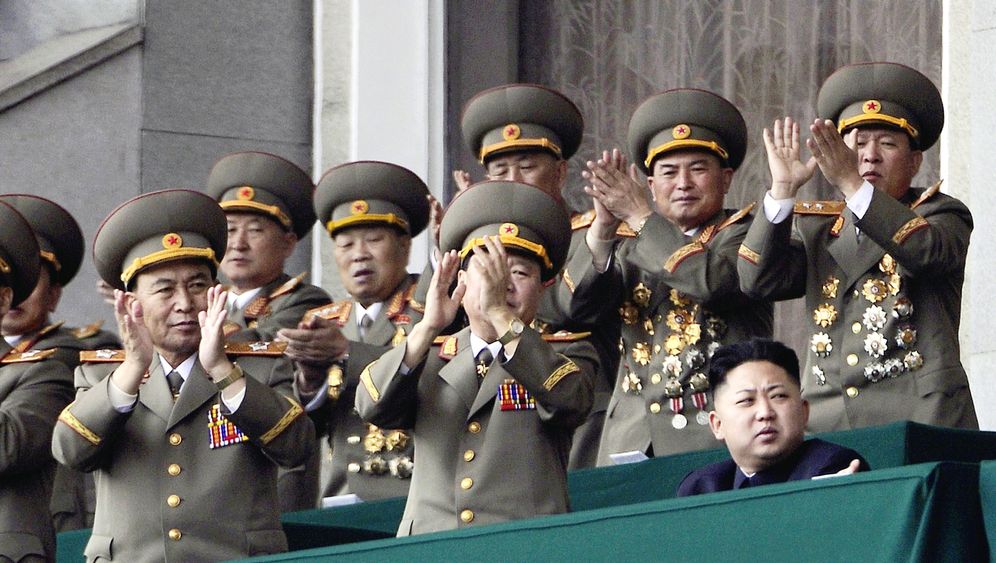 He openly acknowledged the failed rocket launch in April, held a 20-minute speech on television, opens his coat on warm days during visits to barracks and factories, and even lets his underlings occasionally embrace him. Indeed, some six months into being North Korea's "Great Leader," Kim Jong Un is distancing himself from his late father's style of ruling.

For Kim Jong Il, admitting to an embarrassing fiasco, making television appearances and getting close to the people would have been unthinkable. But his son seems much more carefree, appearing in public with a woman at his side and attending a gala featuring actors dressed up as Disney characters.

It's still too early to judge whether the rotund young man with an odd haircut will turn out to be a reformer in this quasi-religious state. Also unclear is whether he can or wants to free himself from the circle of the elite relatives and military figures surrounding him. But there are tiny signals indicating that this could be the case. Private markets in Pyongyang now have more flexible opening hours, and there has even been open criticism about the poor management of an amusement park.

Visitors to the isolated country report that North Koreans -- or at least those who live in the privileged capital city of Pyongyang -- have been going out in public wearing more modern clothing. They have also seen students wearing fashionable outfits and young men who have gelled their hair in the style of South Korean actors and singers. At private markets, imported clothing has also become popular, such as the traditional bell-shaped "Hanbock" dress, which is worn with a slightly different cut and brighter colors in South Korea.

These small changes in the daily lives of North Koreans are the result of the increasing amount of information trickling into the country on DVDs, CDs, videos and USB sticks about life abroad -- and particularly about life in South Korea, the enemy neighboring state.

However, much of this information is actually coming from another neighbor: China. Scores of ethnic Koreans with Chinese passports live along the border between the two countries and cultivate both business and family relationships inside North Korea.

What's more, people crossing the border illegally are also bringing information in. Soldiers may be guarding the once porous border along the Yalu and Tumen rivers more vigilantly than before, but North Korean workers continue to make it across to China to work a few weeks as day laborers.

The Flow of Information Can't Be Stopped

The children of privileged North Korean functionaries with travel permits are also stocking up on DVDs and CDs abroad. South Korean soap operas, recorded and distributed to their countrymen by the Koreans living in China, are particularly popular. The 1997 Hollywood blockbuster "Titanic" is said to be a favorite among North Koreans.

Although privately owned radios are forbidden and the officially distributed ones aren't equipped to pick up foreign stations, the state does allow North Koreans to own DVD players and even produces them at a factory in Pyongyang. "Besides that, we buy DVD players from smugglers; as long as you register the player it is not illegal, because the … authorities allow the watching of translated Russian and Chinese discs," a North Korean refugee told the website "Daily NK," adding that many also use USB sticks, as well.

The state also allows people to own computers, though anyone who has one must have it registered -- and expect the police to check its hard drive for any supposedly subversive material. Indeed, the authorities have set up a special task force, Office 27, for just this purpose, though it remains unknown just how successful it's been. Another body, Group 109, is said to be tasked with rooting out DVDs and CDs with "impure" content.

Still, there is one thing North Koreans aren't allowed to do at all: go online. Even universities and research institutes only use restricted private networks, and being allowed to visit foreign websites is only an exceptional privilege.

Since the North Korean population can no longer be kept completely insulated from outside information, the country's leaders have changed their propaganda tactics. Previous efforts focused on portraying South Korea as a bastion of hunger and misery with thousands of jobless people living on the streets. But now a new version prevails: Though prosperous, South Korea is a soulless society mired in environmental pollution, crime and inequality.

"Until 2000, the people believed that South Korea was a very poor country," a refugee reportedly told Andrei Lankov, an expert on North Korea at Kookmin University, in Seoul. "But then the people saw South Korean films. Now only elementary school students believe that South Korea is poor."

When asked whether all this new information could destabilize the regime in Pyongyang or even spark a revolution, Lankov is skeptical. "The spread of knowledge about the outside world will make the North Koreans more distrustful of their government. But that doesn't mean immediate action against the government."

On the other hand, he adds: "In 5 to 10 years, the majority of the North Korean population will have learned that they live in a very poor and unusually repressive state."