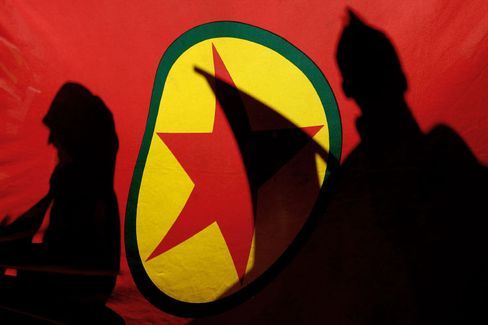 The PKK flag. The group wants Germany to end its "hostile policy" against the Kurds.

The kidnappers kept silent for more than a day but now they have issued their demands for releasing the three Germans they snatched in Turkey on Tuesday evening.

The separatist Kurdish Workers Party (PKK), which has been banned in Germany for 15 years, says it will only release the German captives if Berlin abandons its "hostile policy" against the Kurdish people and the PKK.

Speaking to the pro-Kurdish Firat news agency, the PKK guerrillas said the hostages, who had been part of climbing team on Mount Ararat, are in good health.

"We have no hostile feelings against the German people, and the three prisoners have not been mistreated in any way," the group told the news agency. The kidnappers have also demanded that the Turkish government halt its operations in the area in order to assure the safety of the hostages.

The immediate response from Berlin was to reject the PKK demands. "Germany does not allow itself to be blackmailed," Foreign Minister Frank-Walter Steinmeier said on Thursday.

Cemal Kaya, an aide to the regional governor of Agri province, told the Associated Press that Turkish paramilitary forces are now scouring the region searching for the three men. "Our hope is that they will be released and handed over to the authorities without any harm."

The three men, aged 33, 47 and 65, were part of a group of 13 mountaineers and were abducted by five Kurdish rebels from their 3,200-meter-high (10,500) camp on Mount Ararat. The three seemed to have been picked out at random, and the other 10 climbers returned to the city of Agri on Wednesday.

In Berlin the Foreign Ministry has established an emergency task force to work towards securing the release of the three climbers, who all hail from Bavaria. Steinmeier said on Wednesday that the government was "doing everything it could to secure their release soon." He added that the task force was "working intensively on the case and is in contact with officials in Turkey."

This week's kidnapping is widely regarded as a response to the ban the German government imposed on the Kurdish television station Roj TV in June. Interior Minster Wolfgang Schäuble said at the time that the station was a mouthpiece for the PKK, which was banned in Germany in 1993 after it carried out a series of fire-bombings of Turkish and German institutions in Berlin. The PKK has been agitating for a separate state for the Kurds in southeast Turkey since the early 1980s, and some 40,000 people have been killed in the conflict.

Germany is home to 2.5 million Turks, including an estimated 500,000 Turkish Kurds. German intelligence agencies estimate that there are 11,500 PKK members in Germany. Last October Turkish nationalists and pro-Kurdish demonstrators clashed in Berlin amid tensions over Ankara's plans to go after PKK rebels in northern Iraq.

In 2002 the European Union named the PKK a terrorist organization and in recent years Germany has stepped up its cooperation with Ankara in cracking down on the PKK within its borders, with Berlin extraditing two Kurdish militants to Turkey last year.